I’m trying some approach grafting this year for the first time. I got a Russian Kaki persimmon from Just Fruits and Exotics this spring. They list it as cold hardy to zone 6, but I’ve lost quite a few “zone 6 hardy” persimmons over the past few years. So I figured I’d try this technique to keep a potted backup instead of possibly losing another tree. Here’s the JF&E description:

Potted American persimmon on a stool near a Russian Kaki branch. 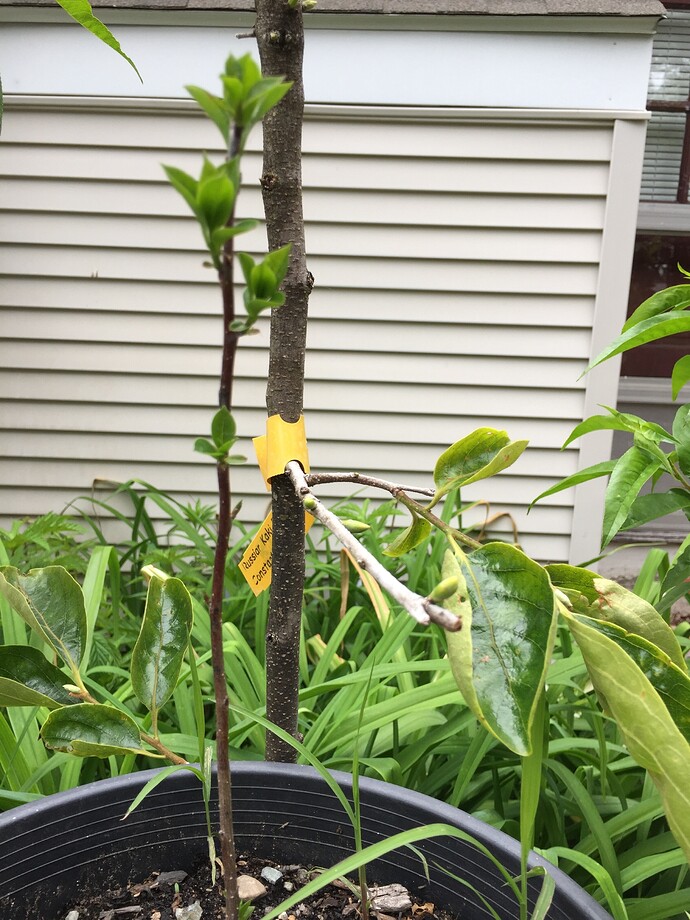 Exposed a little bit of cambium on branch and rootstock. 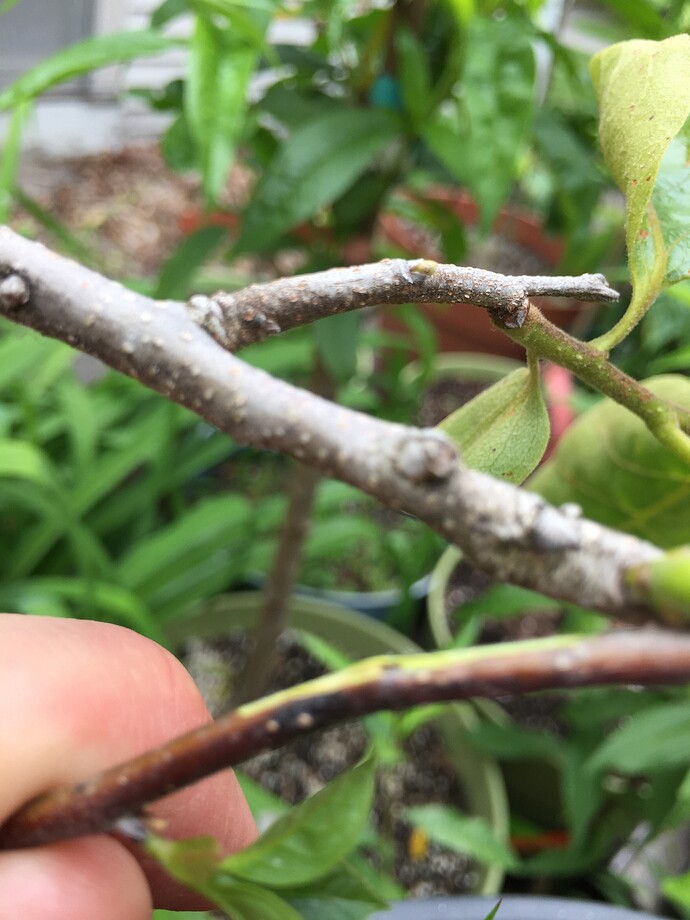 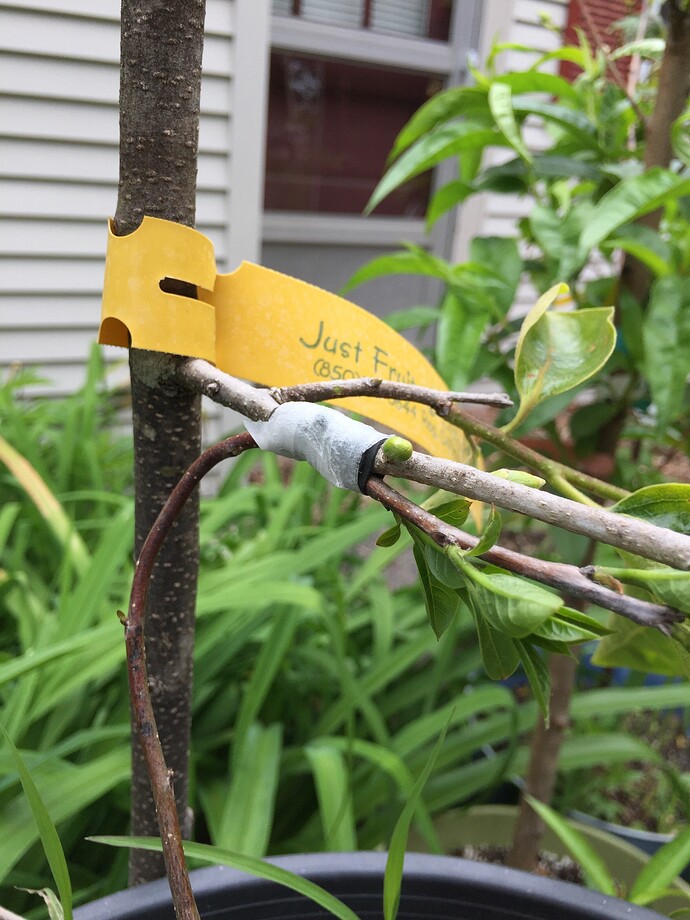 And that’s it. I’ll give it a month or so and then wean the branch off of the tree by cutting it off over the course of a few weeks. 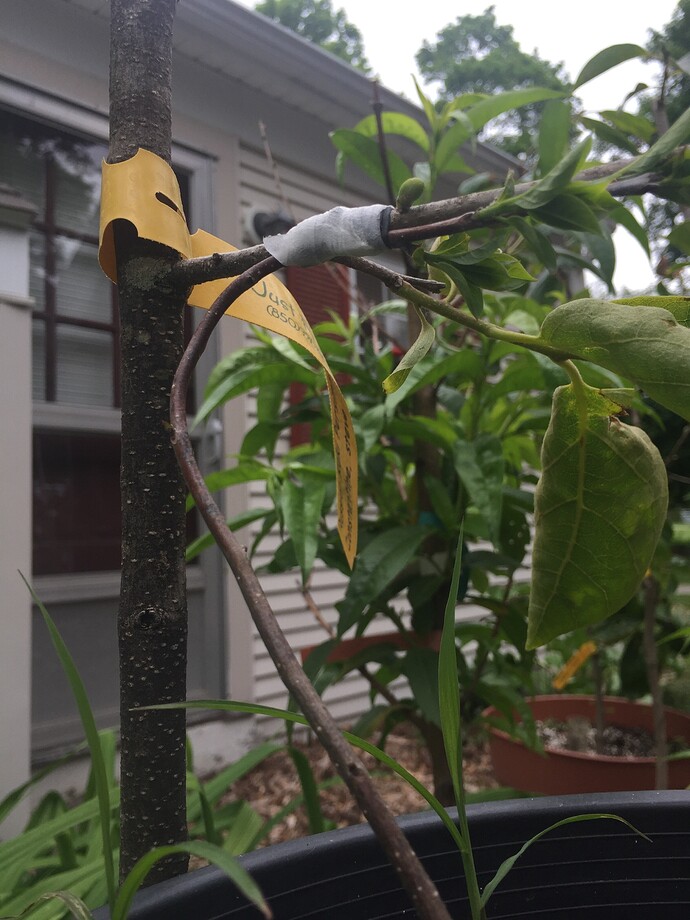 I’m planning some approach grafting myself. I am going to plant some apple seeds around a runty Dabinett tree and put it on seedling roots.

Dabinett seems like one of those scions that needs to be on a full size rootstock. It is not doing well for me on a G.222 root. I will approach graft it next year or late this summer if the seedlings grow quickly.

Sounds like a good plan.
I’ll try to remember to post a follow-up in a month or so to show how it went and add anything I learn.

I’ve learned something new. Thanks for posting. Wish you a lot of success.

Update:
I had done two of these. I cut the first one two weeks ago. It looked like it died, but just recently started to send out new growth. So, success, I think. I cut the other today and removed some of the leaves to help with the transition. Here’s a picture of the one sending out new growth. It’s a Sung Hui persimmon. 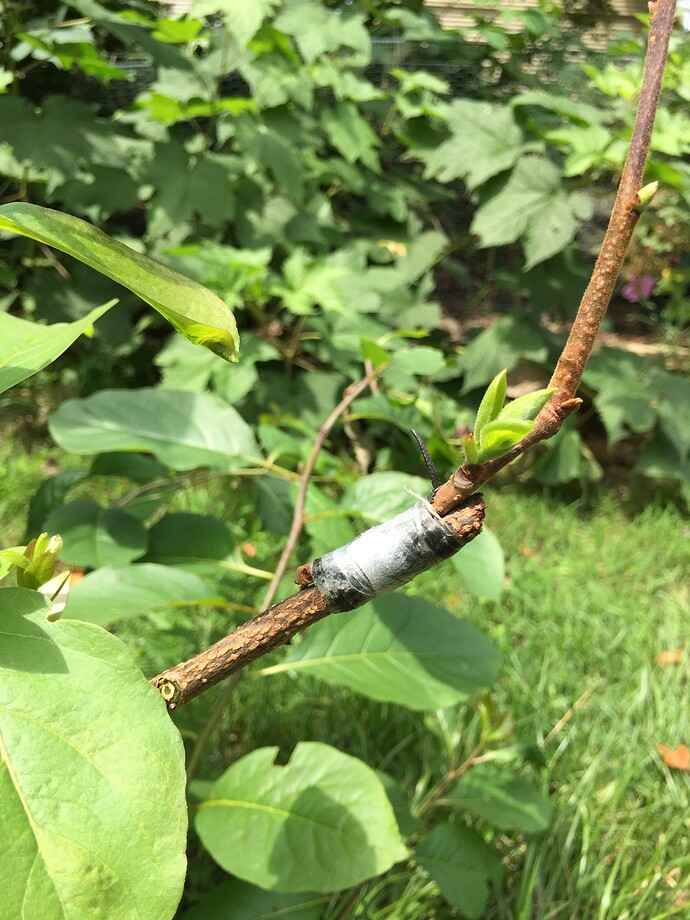 Looks like it will make it. I have been considering using the approach grafts with my filberts and persimmons. Might even try it with muscadines.

I wonder why you would want to only give a month or so for the 2 pcs. to grow together before clipping. In the unassisted approach grafts on tree branches that crossed, touched, thickened, and grew more stationary/less slipping against each other, it obviously took years for some of those to grow into a very strong junction. I did a bunch of approach grafts on muscadines and most survived for several years and have been making fruit. The vines are not round, but rather are oval, so it was important to tie vine sections together strategically so that the oval “flat” areas on each pair would provide maximum contact to fuse together. I left them tied together for a bunch of months before clipping. It was definitely worth doing.

I wonder why you would want to only give a month or so for the 2 pcs. to grow together before clipping.

I wasn’t able to find a whole lot of information on the subject before trying it. The few sites I did find said four weeks was enough. I left the second one on longer, so we’ll see if that helps.

Here are a few peaches from last summer’s approach grafting experiments. The initial graft looked much like the SMC_zone6 pics at the start of this thread. I let them grow for a month or so before removing from the scion donor tree and cutting the spare top off. Grafts were made at several different times in the summer, and most of last summer’s temperatures here stayed below 70 with some very cool stretches. Not very good pictures, but most of these scions are only 5-7" long with approximately 3" of actual graft length. The long one is about 14". 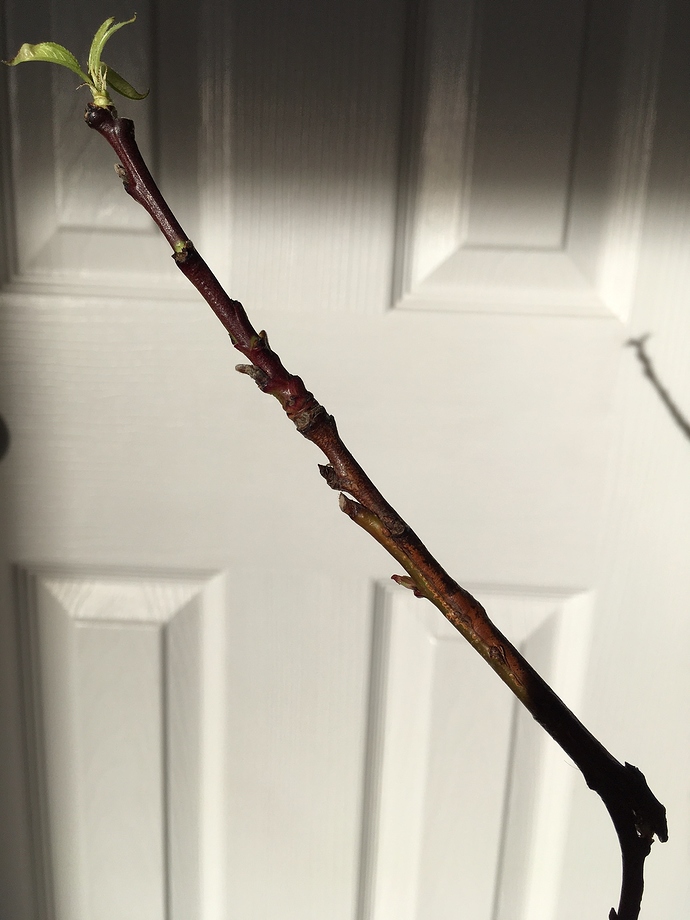 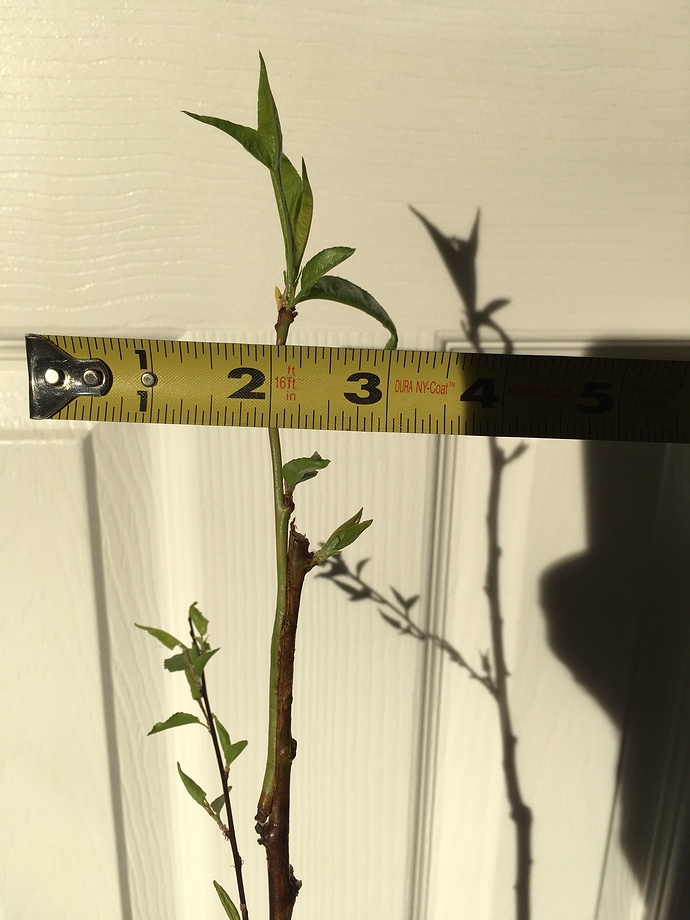 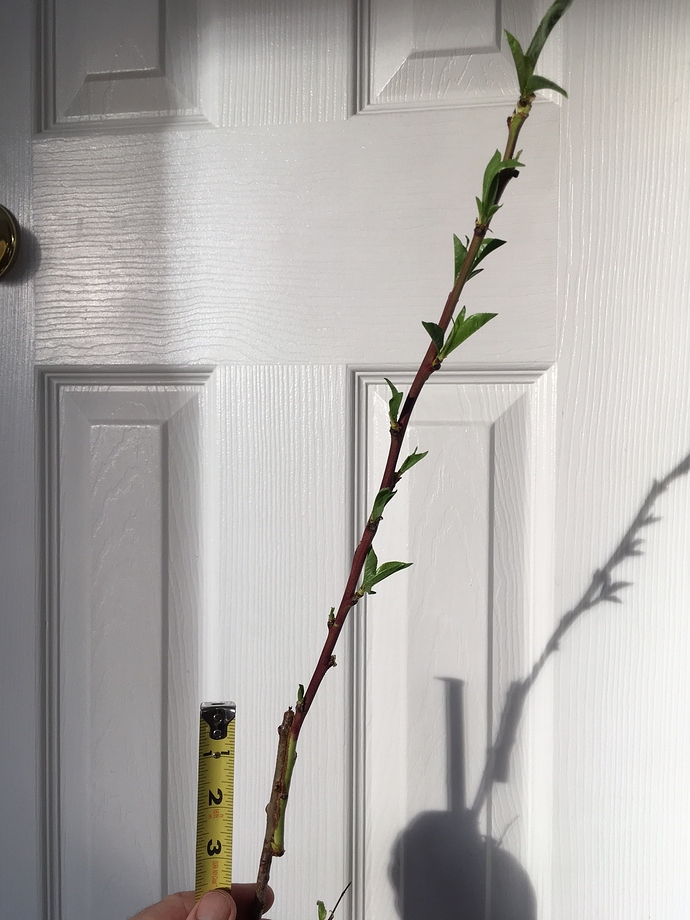 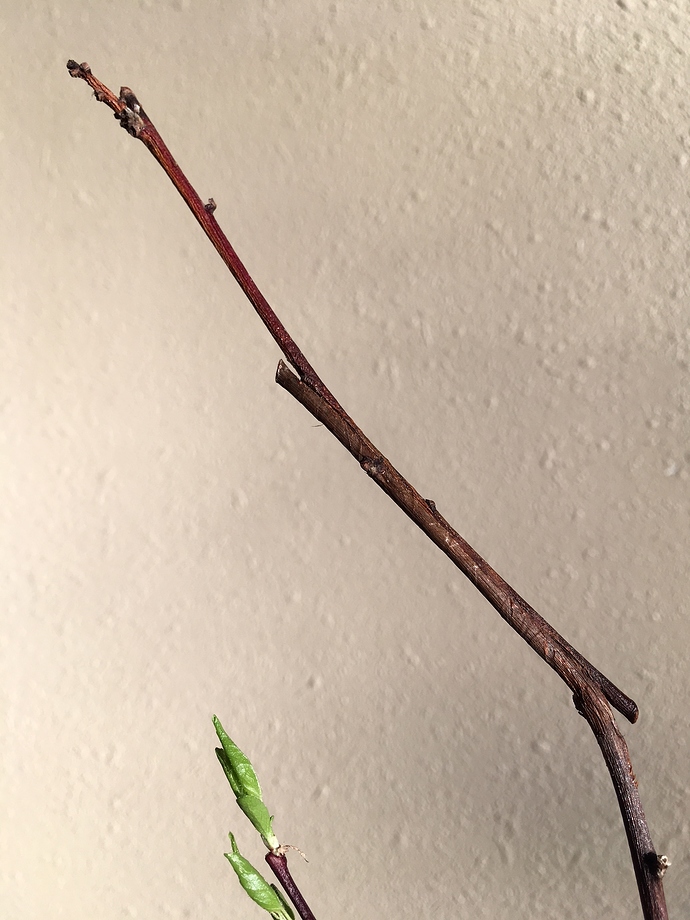 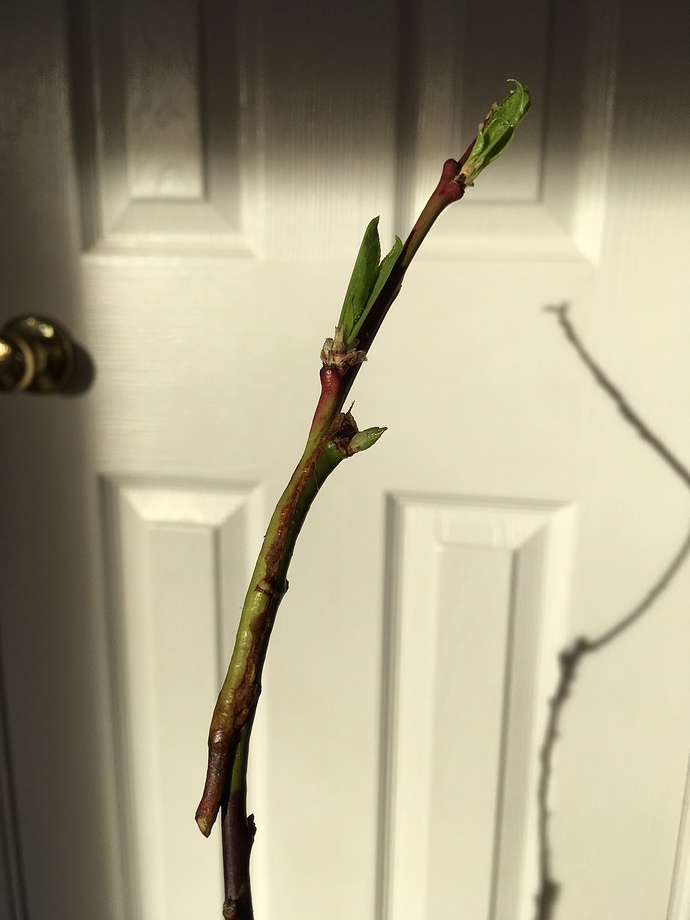 Note the fourth picture is of a dead graft. The graft looked good when I made the removal cuts, but got slammed by a sunny day a couple days later. The scion are vulnerable after the removal cuts as they have to figure out their new supply lines, and leaves want to droop. I believe a week or two of shade would be beneficial at this point.

The graft that died limped through the fall but expired in the winter. These were all potted plants I kept in my crawl space, which didn’t stay cool enough to keep them dormant. These pictures are from today. The approach grafting worked well on everything I tried, including peaches/nectarines, cherries, pears, apples, and apricots. More of a fuss than spring grafting or budding, but more forgiving of not ideal conditions.

I broke the graft apart on the dead scion, and it broke easily enough that I think it will be a good idea to give these trees support for a while.

Of the peach trees I approach grafted last summer, about forty percent had the graft die during the winter. I wintered them in the crawl space at temperatures usually from 35-50 degrees F, and they woke up pretty early (by my standards.) All of the trees had some new growth on the grafted portion last summer. The surviving trees are all taking off and looking good. The cherry and apple approach grafts are happy, but of my two apricot one died also. I might mention that I also lost two conventional grafts on trees in the crawl space. I also got some budwood that showed up mid August, and did 21 T and chip grafts, of which only one grew out this spring. I have experimented quite a bit with bud grafts (generally earlier in the summer) and have had very poor luck with bud grafts surviving the winter here in Alaska, except for apple. Our temperatures aren’t too bad, but maybe they don’t like the length.

I had about a 10 percent mortality of the rest of my trees in the crawl space, I assume from over or under watering, or perhaps they didn’t like the early winter time frame I left them outside in the cold to get fully dormant. I’m happy with the 90 percent.

Many approach grafts later, I’m still finding this technique helpful in certain situations. I’ve noticed cutting off the graft from the donor rootstock can occur with peaches at about three weeks with a good expectation of success, but apricots seem to like a minimum of four weeks. Not sure why the difference. I haven’t used this method as much with other varieties, though I generally figure four weeks is good. Probably that is overkill for some fruit types. I also have started cutting off the new rootstock’s top above the graft after only a week or so.

This is a great vid on this type of grafting! 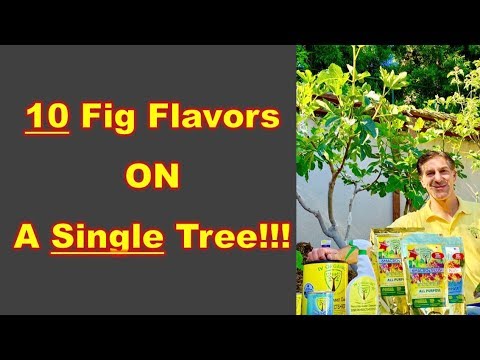