Does any one use apricot as a peach rootstock. This was brought up on another thread about borers. It seams as though the cot may be less susceptible to borers. I also am wondering if it might also live longer than a peach. I top worked two manchurian bush apricots this spring. The grafts took and are growing. Has any one had experience with this. Will the grafts eventually fail due to lack of genetic compatibility?

I tried grafting a donut peach to a Puget Gold apricot and it grew and then stalled out… maybe the graft didn’t take, but it sure looked like it was incompatibility (the shoot just stopped growing/the leave started looking ratty)… That was a donut peach…probably better to try something like Redhaven on a seedling apricot … I know i’ve read in research that there can be varieties that don’t play well so you need some sort of interstem to make it work… I’ll be trying again with the Puget Gold and probably Mericrest nectarine since i hate that apricot (reason i’m budding it over) but i like the tree (Location/size/branching)…

I have Krymsk 1 that will be used as peach rootstock alternative… Krymsk 86 is another but impossible to find.

Thanks for your input. I need to do a bit of research on the bush apricot I have, I think it is just a wild native cot from Asia that is a bush. Here in Missouri it grew much taller than my standard peach. They just seem so healthy compared to my peach trees that r the same age. They don’t fruit very often as they bloom so early here. I did save a bunch of seed from them a few years ago but when I transplanted the seedlings we had a drought and they all died.

I got a Honey Royale Nectarine graft on a Chinese Sweet Pit Cot. We’ll see what happens in a couple of years.

Just doing some trials for knowledge.

Here is my peach on a ManchuRian bush cot

Sorry,couldn’t get this to load on my tablet 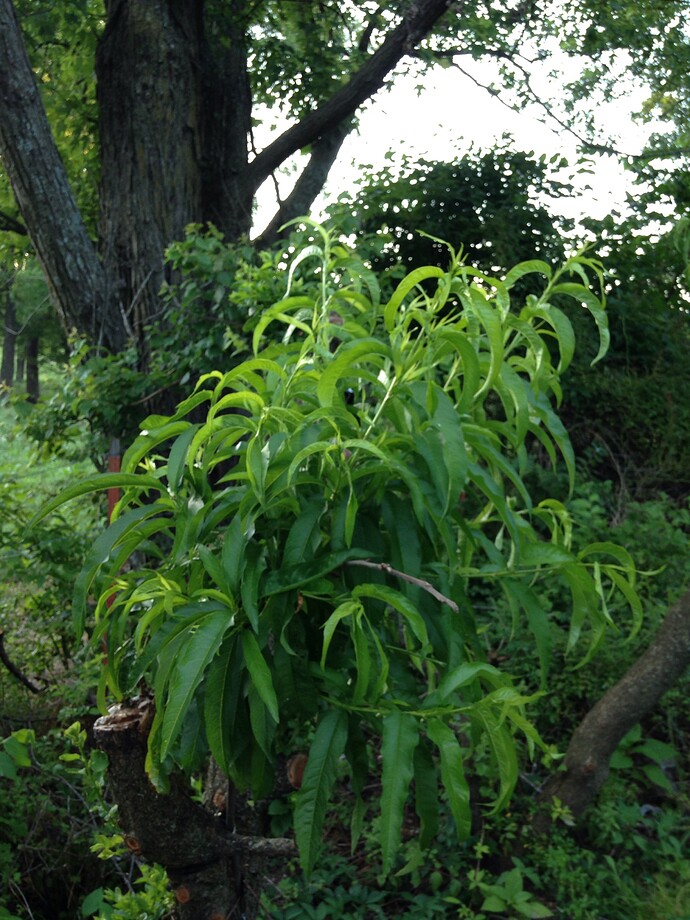 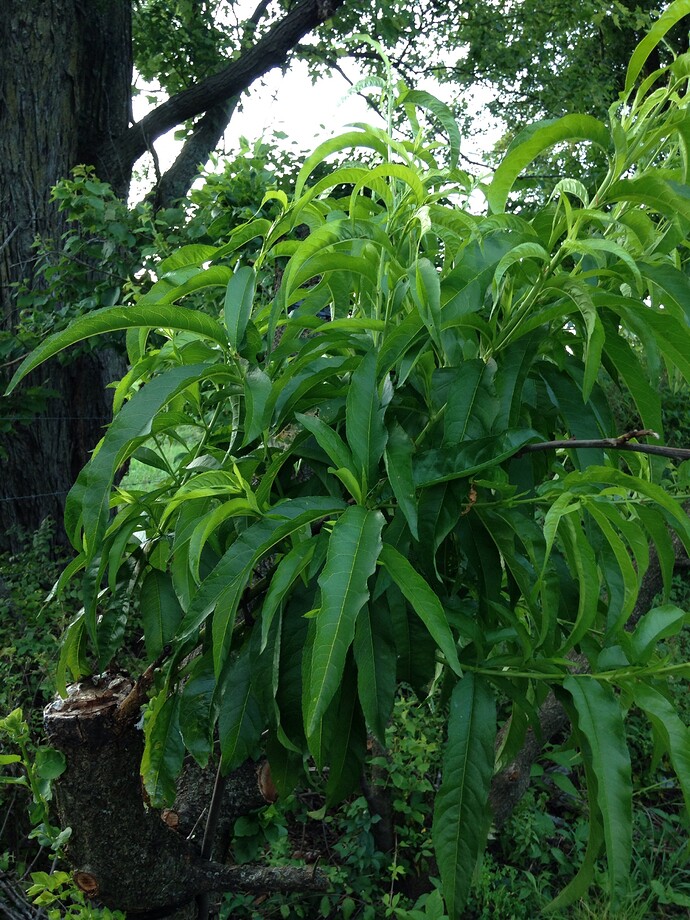 Looks good. Hopefully it takes I have a pluot graft from 2 years ago that is taking over my apricot… i also have a Satsuma on there (it flowered/didn;t set fruit), I have Superior plum on there (with fruit), i have a plumcot (forget which one) and i think some other stuff (Tomcot is grafted on it).

I need to start chip budding…maybe tomorrow i’ll do a few…its getting to be that time.

Thanks for the reminder of chip bud. I will do some too.

I cut my cot back hard this spring so it has about a million shoots that are perfect for budding… only thing that scares me is the whole tree dying with all this stuff grafted onto it… i almost need a backup tree!

Did some reading…not much info out there and what i did find all suggest its not a common practice (peach onto apricot)… I think while a take might occur, we might see delayed incompatibility (seen in some rootstock trials i’ve looked at). I think an interstem would make it work much better…

I did read some are using hybrid plum seedlings (which i have one//an Alderman seedling) because of hardiness. I think i’ll put a few peach buds on mine and see what happens.

Cool. Keep Us updated on your trial results.

My experiment came to an unexpected halt today. We had thunderstorms roll through just after I got home. Lightening struck a maple in the back yard and blew off a large limb high up that crashed down on my two manchurian bush apricots. Oh well, some things you just can’t plan for and with lightening that close I am glad it struck an old maple and not the house or the well. I thought I would post a picture of the graft Union and show how healthy the graft appears to be at this point. 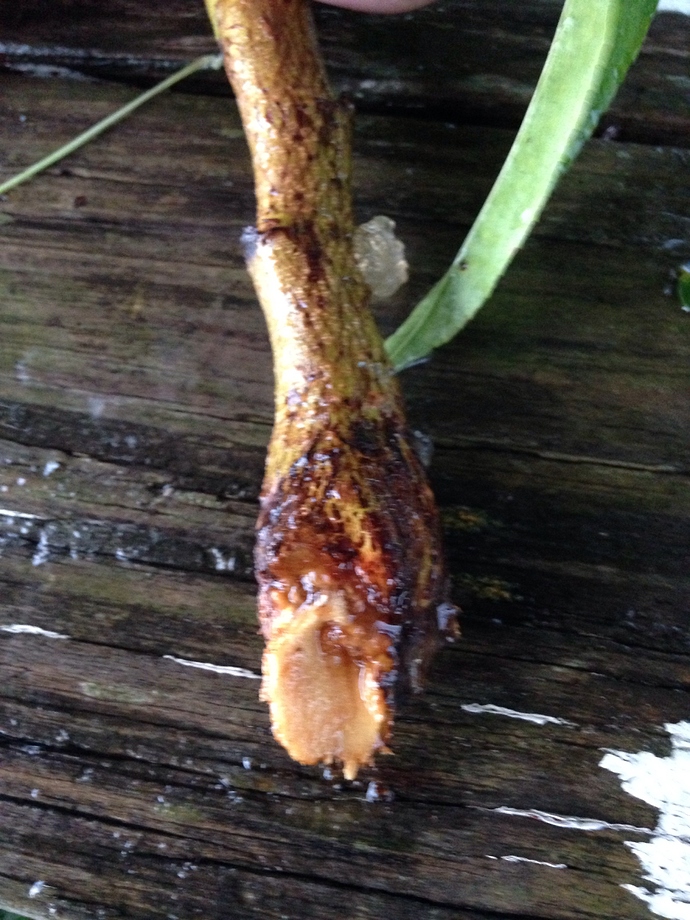 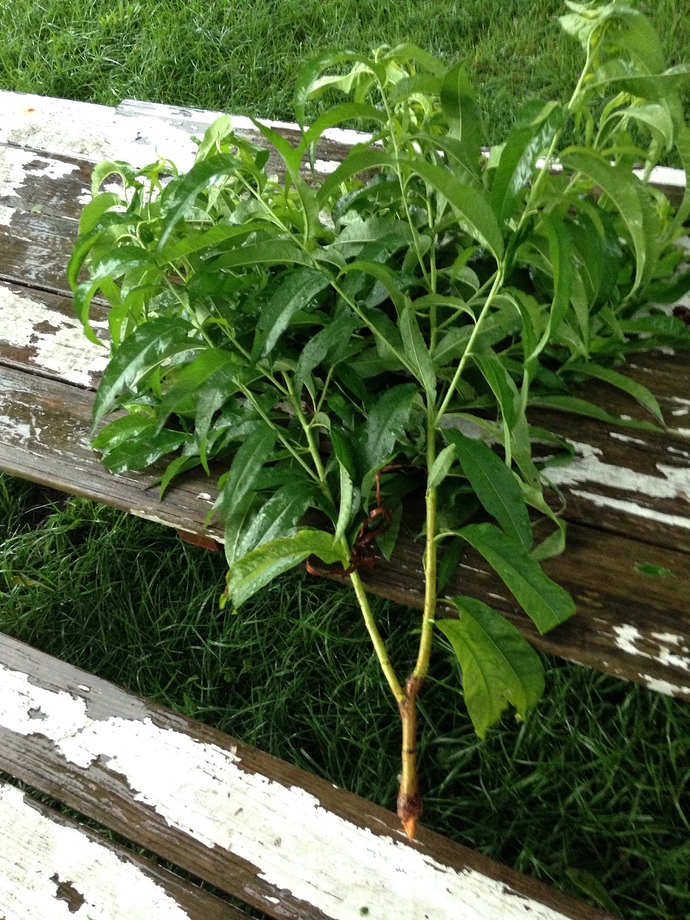 Yup…the unexpected things. It sucks…just have to keep on going… I had a large zinnia get knocked over…it was full of huge flowers in a perfect spot…dead… also lost a huge ready to bloom sunflower. I love storms but i hate the damage…hail can be even worse.

Yes, not exactly what I had planned, but the root stock has sprouts all over it so I am sure it will live to be grafted again next year.

Derby. Glad everyone is safe. Plants can be replaced. Bill

Yes indeed bill. That was only twenty yards behind the house. It was interesting to see how that bark graft was growing into the rootstock anyway. I think that is why I do some of this, just to see how it works.

It appears that one of my peach grafts survived the crash! It was the smallest and it was loose after it had been hit. After a few days it started to wilt so I pinched off most of the growing tips and some leaves to cut back on the amount of living tissue the graft Union was trying to support. It perked back up after a couple of days and now looks healthy. So my experiment of peach on bush apricot continues.

I chip budded some apricot onto apricot and then apricot on to what I think is a wild plum/alderman plum cross (it was a seedling from Alderman but has the leaves of a wild plum…the fruit doesn’t seem to be sizing up much either). … I also plan on grafting peach to this plum.

Interesting, keep us posted on your results. I was not aware you could put a peach on a plum.