Has anyone tried an apple variety listed as “apricot”? Sounds interesting, just wondered how pronounced the apricot flavour was.
https://www.orangepippin.com/apples/apricot

I have been growing that apple. It doesn’t taste anything like apricot in my climate, but it does have an unusual flavor. It is also very hard-fleshed, even more hard than GoldRush. I haven’t gotten enough good samples to have an overall opinion yet, the tree is low and the deer have been harvesting it.

The apple I find having the most apricot-like flavor is Wickson.

Thanks, I was having trouble picturing an apple with a full on apricot flavour. Is it a good keeping apple?

I have not had much experience with keeping but it should be an amazing keeper based on how late the harvest is (one of the latest) and how hard the flesh is.

Might be worth trying a scion next year then. Just out of curiosity have you heard of one called Hawaii?

Yes, I have that one as well. It is very similar to golden delicious; its an excellent apple.

Ordered Apricot apple scion for '19 and hope to report on it in fall '20.

I grafted 6 Apricot Apple to G.222 this spring (2019) and all grafts took and are growing with good vigor.

My Apricot graft from two years ago has been vigorous, too. It set half a dozen fruit this season, so I’ll soon find out if it’s any more apricot-like on its native Left Coast than @scottfsmith observed back East.

Since posting the above (2017) I did get a few with a more apricot-like flavor. I had a really small and crowded graft of it but I grafted it in a much better spot last year and am looking forward to more of them.

(Looks like there is life after all for Maiden Blush, Twenty Ounce & Mere Pippin. Mere came by way of Skillcult. Thank you, Steve!)

Harvested some Apricot Apples today. I would guess it’s named for its color rather than taste. It’s very Crunchy and would be truly choice if very ripe ( most would drop before this point). The shape, color and texture reminds me more of an Asian Persimmon. 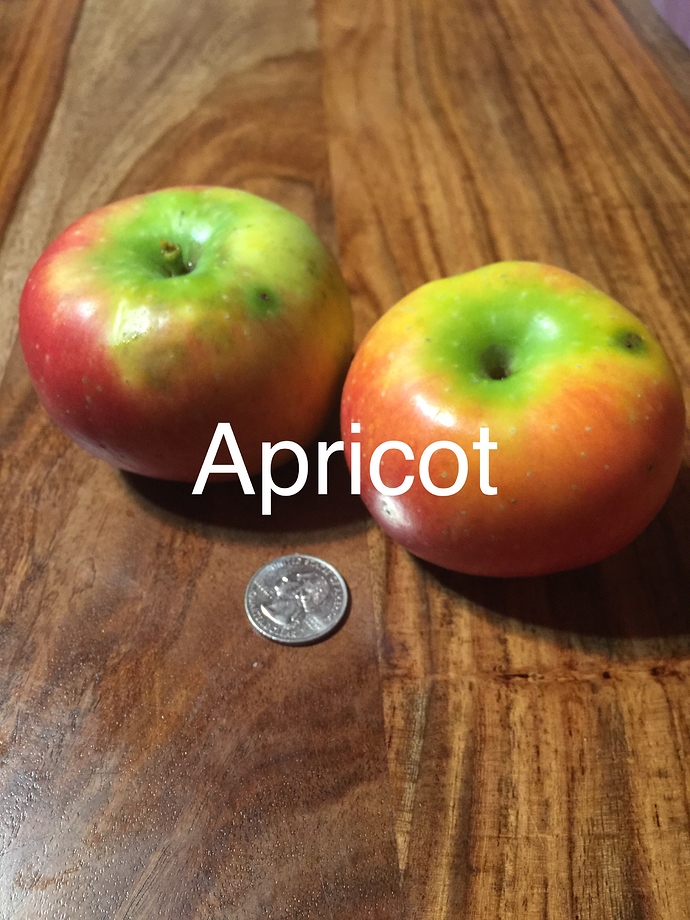 I also had problems with dropping, that might end up being a deal-breaker for it. If they hang long enough they do get a bit of apricot in the flavor. It was named for this flavor by Lon Rombough.

Interesting. I will leave a few on the trees and see what the do.

I’ve had a couple of drops from mine already, and while they’re weren’t fully ripe, I could taste a hint of apricot flavor (or, at least, I imagined that I could). I’m looking forward to trying a riper one. Agree that it was very crunchy, and that’s it’s likely to be a keeper here.

For me it is more hard than crunchy. It makes GoldRush seem like a soft apple in comparison

My graft was getting crowded by my Rubinette tree so I moved it to a better spot and am waiting for the new graft to kick into production.