Are there any hop growers here?

By Friday I’m expecting 10 different varieties of hop crowns to arrive in the mail! I selected them for hardiness and early flowering, time will tell if they can be coaxed into cropping here in Alaska. The biggest problem seem to be that by the time our days become shorter, which gives them the signal to flower, our winter is around the corner. I plan on trying different things to see if I can get them to flower sooner.

What does their root system looks like? Is it tap root? Shallow? Mat-like? Does it go far? My soil is glacier wash, think dry river bed that is 60% round rocks and sand. My plants thrive because each one sits in what amounts to an in-ground raised bed (buried bed?) I’m trying to determine the best bed for these.

It’s a large, dense, expanding ball of rhizomes. I’ve never tried to dig one up after it was established, but I’ve cut pieces to propagate.

My biggest problem here in WA is powdery mildew right around when the fall rains start.

Edit: and yes, planting them on a mound of soil basically is the usual way, at least that’s what I was told to do and it has worked well for me. Makes it easier to dig out rhizomes for propagating later, too.

Sounds like a 2’ wide circle by a foot deep ought to provide enough soil mass for moisture and nutrients… I cap that off with a thick layer of green wood chips mulch.

It will likely end up pushing its rhizomes wider than that, but yes that should be enough to keep it happy. Could bump it up to 3’ just to give extra margin of error in case your cultivars spread more than mine.

I’ve grown hops now at 3 different homes, 1 in Maryland and 2 in WA, but keep moving right after they start hitting their stride around year 3. At my current house I just planted some rhizomes I dug from the ones I planted at my last house down the street (current tenants were happy to let me do that). I’d say the root balls there were about 3’ diameter on year 4 this spring.

The nice thing about my crappy soil is that enlarging the holes after the fact is doable. The ungodly amount of rocks means that there will be few roots in there (if any) so the plants are not unduly molested.

Ok, I stand corrected, a 3’ wide hole seems like a sensible start. They can build up quite a huge root system. 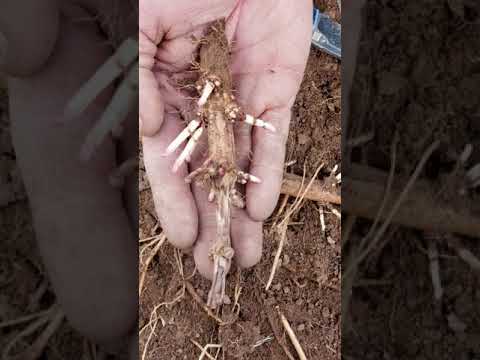 I have been a member of this forum since 2005 , but only recently reposted
(when Jack Keller passed away a reminder of a member here actually)

Forum for topics related to planting, growing and processing hops.

Don Here I found a wild hop , but I am wondering

Have you ever thought of getting a Male maybe seed crossed ones will adapt to new climate.

I am not sure what the climate is but Some of the Neomexicanus are in the mountains , and get frost at night not sure what would be best for you in your climate (maybe short season Midwest hops or desert hops with extreme hot cold temps?)

There is some species also from colder climates in Europe
I wish I could help, but maybe ask a detailed questions of the ones that might best be suited to you in Alaska
these guys on Homebrew talk know a lot of the different types , and climates
( I quit researching stuff until I will use it, but very interesting reading about feral hops as well as native breeding , and I may have some leads at least if your interested, but it takes time for me to dig this stuff up, but sometimes no time at all.)

Grows In Colorado As well
Colorado can get - 20 as well ,
and high up in altitude I wonder if some of those selections are any good.

My issue is not hardiness. I’m in zone 4 and a number of hops are fine with that. The problem is that they use the shortening of the light cycle as their cue for flowering and here in Alaska that’s what we call the beginning of winter; they just don’t flower in time to ever crop. Today my sunrise was at 4:46am, sunset will be at 11:02pm; anything that loves the sun and doesn’t mind a chill is going gang busters.

I went down any extensive list of hops and built a short list of candidates that were both hardy and early cropers:

First step is getting them to grow, then I can watch for plain old adaptation (epigenetic changes, plants do like to try and make it) as well as tricks to coax them into flowering earlier. Obviously a green house would let me control their environment but my desire is to have them producing in the open.

That’s my all time favorite hop. More subtle flavor than many of the modern ones, but just very pleasant. It’s one of the so-called “noble” hops.

Mine is Hallertau. It is a noble (very old school) low bitters hop so for people used to the amount of modern more bitter hops think that I overhop my beers when the opposite is the case.

Yeah they both have that… spicy? … taste that is missing from the big citrusy hops that are popular now

First step is getting them to grow, then I can watch for plain old adaptation (epigenetic changes, plants do like to try and make it

I am doing something similar with other plants

Have you contacted any Alaska Brewing companies already growing hops
Even if they grew them for a Novelty on brewery site (which I know there are already./)

This would give you a head start on time (of the Adapting epigenetics your speaking of)
Since they already have plants in the ground.

(I did mean the High altitude hops may have a early Maturity or later flowering time as well.
I am Sure Midwest hops by the great lakes also have lower amounts of time to ripen fully
(it is 55 degrees now May 23 – 10 Am, but slow season this year. )

The only people growing them seem to be aficionados such as myself. There is a guy down by the peninsula where is warmer growing them on greenhouses with better results but even those seem to be tiny hops from tinier harvests.

There are a number of tricks I want to try for outdoor production and I’m not in a hurry. If I accomplish step one, getting them to reliably come up year after year, that alone is a win. I will sell and give away plants far and wide which will improve the odds of somebody here figuring things out.

Sweet baby Jesus I have shitty soil! Basically 60% rocks, 40% sand, with a trace amount of organic material in the form of squalid dandelions growing on it. And yet things are not all that bad; you can always improve the soil, you can’t cart in extra sunlight which is what I get a ton of. 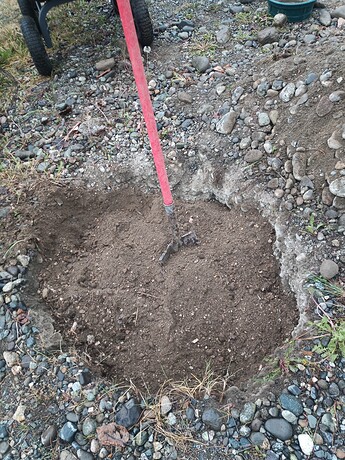 36" wide by about 18" deep. So far it is 1/3rd very loamy top soil, 1/3rd compost, 1/3rd native sand. I may bump the compost ratio a bit and start blending in perlite and peat moss to make it easy to harvest rhizomes later.

So far there are 30 gallons in the hole. Flush is going to be about 50 gallons, plus another 10 gallons to mound it a bit. I measure in gallons because it is easy using 5-gallon buckets; it is going to be close to half a cubic yard of planting soil per hole.