Some years ago we cut back one of our large multi-trunked original apple trees (planted 1978), letting one young upright “branch” grow into a new tree (which it did nicely). For some years there have been plentiful pretty clumps of orange mushrooms growing at the base which was about 2/3 dead stump and 1/3 live on the side where the “new” tree is growing. I hadn’t paid much attention except to admire them. Then in fall someone on the forum mentioned Honey Mushrooms, and that you certainly didn’t want them in your orchard. Oh?? I looked them up. The mushrooms I had were gone except for some dried/frozen ones but based on photos and description that was indeed what we had here - Armillaria mellea - Honey Fungus, root rot fungus. Mycellium feeds on dead wood, then on into live wood, eventually killing the tree. No known cure. Oh great. I didn’t have to look far to see that the area around the stump was full of it. 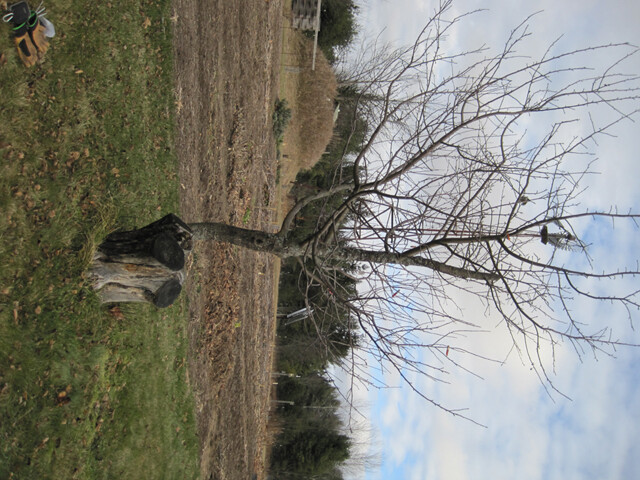 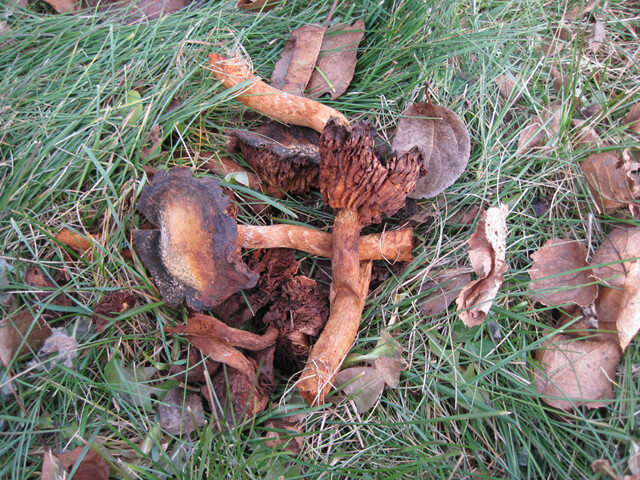 Almost all report were gloom & doom type - it’s common all over. But one good trial in California gave some ideas - and hope. I read the report and picked up what I could from it, coming up with a plan. When I looked carefully at my tree it was definitely showing signs of stress with small splits in the bark, and woodpecker holes. In the summer it had had fewer and smaller leaves in the top branches which I had put down to stress from the record heat.

Early Dec. continued dry and mild here with no snow. So with shovel and trowel I set to clearing the sod from around the stump/tree. Not so easy with the thick sod and clumps of suckers, trying not to nick or damage live wood or live roots. I found some dried up mushrooms. Where there were no suckers it wasn’t too hard, dig down and out about a shovel’s worth. Getting the sod out around suckers and cutting them off without damaging live wood was an exercise in patience, but this is a special tree so no complaints. Trowel, loppers, an old hatchet and mallet, folding saw, whisk broom. Slow work but eventually I got down to the main live stump and major live roots, removing everything I dug out into the field away from trees.

Down about 5" I found gravel and stones I’d put around the base of the tree so many years ago. The root flair and some large live roots emerged. I was amazed at how much the surrounding soil had built up. Being within, then at the edge, of the garden it was in the richest, probably dampest, soil of any tree in the orchard, with thick sod built up over decades of growth. 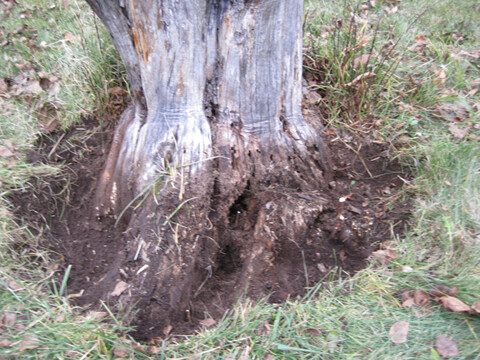 Steve then went at it with the chainsaw, 2 sessions, lopping of large chunks of the dead stump (beautiful stained wood!), then carefully carving out, and down, all he could up to (and over) live wood, smoothing all so there were no “rain catchers”. It looked good (relatively speaking). I cleared up all debris (dumping it in the middle of the field) and did some final smoothing with a gouge. That’s all we could do, leaving it open to the dry air for the winter, hoping the cold will help knock down the fungus. 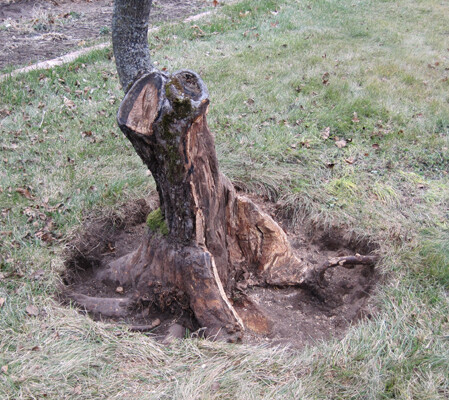 Come spring, I’ll surround the tree with fresh prunings and stuff from under healthy woods apple tree, hoping to get a competing mycellium going, encouraging the tree all I can.

nice work. i wonder if spraying with something antifungal like neem might help fight the fungus. neems all natural. maybe buy some neem meal and use it as a fertilizer, sprinkling it around your stump then spraying neem oil directly on it. cant hurt to try.

are these bacterial treatments Richard? never heard of them.

I think if this is a variety you wish to keep, grafting scions from it on to a new rootstock , starting a new tree would be best.
This tree may not be long for this world .

Phase 2 of my help-the-tree-recover (ideas based mainly on the California research article: Non-chemical control of Armillaria mellea infection of Prunus persica - First part - inside the dug-out area (left open all winter) I tossed in pruning “twigs” (thinner pieces cut to short lengths) plus some soil from under a healthy wild apple. I’ll add some more pruning pieces later.

Second part is a Winecap Mushroom “bed” around the tree, mulching the sod. Will add purchased spawn when freezes are likely over. Using what I have, from the bottom: cardboard - old rotting hardwood branches (to hold the cardboard down since it was windy but figure they might be useful) - pruning twigs/small branches - buckwheat straw/hay from last season - some wood chips from last year - hardwood rough sawdust from fall sawing. I’m pretty sure I can get some this-year’s roadside chips so I’ll add that and more pruning stuff later. Basically a make-do hodge-podge of ingredients that I hope the Winecaps will “make-do” with.

I also pruned the tree to make sure it has plenty of air circulation. Third part - yet to be done - is to entice some wild TurkeyTail mushrooms onto the dead part of the stump. I happen to have some growing on a low ground level apple stump. Haven’t figured out just how to “move” it but that’s next. I’m thinking to scrape off all I can into a bucket, mash it up maybe with some sawdust, mush it into available crevises. We’re into a rainy spell now which I figure is good time to do it. 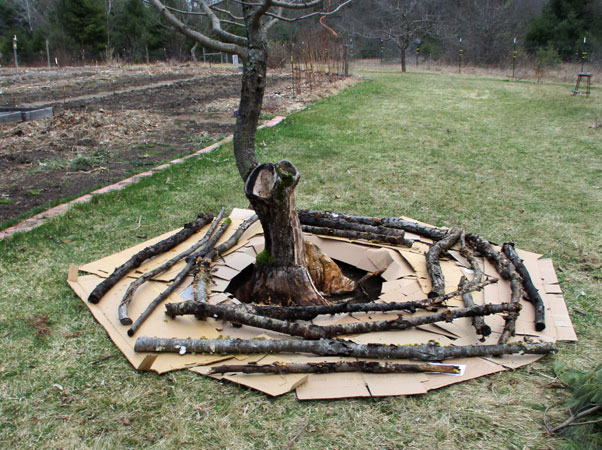 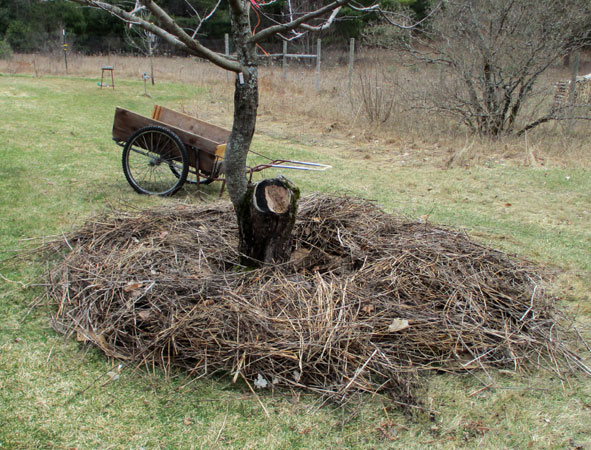 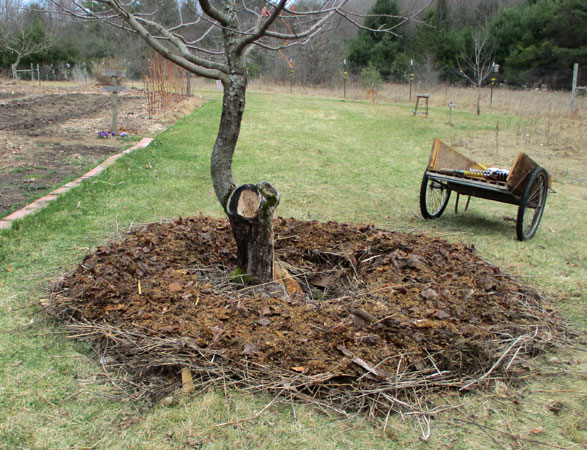 It should work now - I removed the ) I’d put at the end and got included in the link. Sue

I’m very excited to hear your results as this develops over the years. I also have some Armilleria on the edge of my orchard. I only have trees which are considered somewhat resistant in the area (figs, persimmons, pawpaws). Best of luck!

Mid-August – So far so good! I put in a generous amount of Winecap spawn (from Field & Forest) May 21. A week later I had to cover it all with blankets when we had 4 nights of freezes. Then watered for 6 wks of hot and dry! Strange weather for us (plenty of rain since). I was hoping for some mushrooms (though my main goal was a thick, agressive mycellium) but didn’t expect any until fall. But it surprised me by popping mushrooms July 21, small and large. 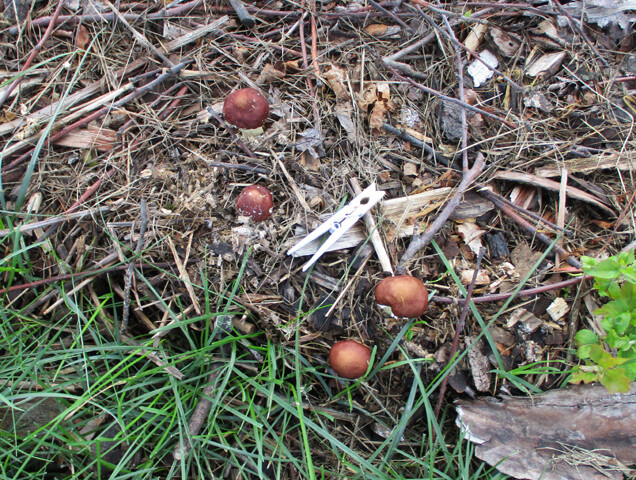 The mycellium is thick everywhere I look! But I discovered an issue with my bed. Mushrooms are surprisingly strong but they do have trouble getting around limbs and larger pices of branches and wood. So they often form and mature under stuff unless I notice a “bump” and gently uncover to find the young ones. So I pulled out most of the bottom old poles and larger pieces (threw them in a couple of shady brush piles under trees since they were covered with mycellium). Added some old leaves and cut down buckwheat (using what I have) to recover the bed. I hope the disturbance doesn’t bother it too much. We’re liking the mushrooms. 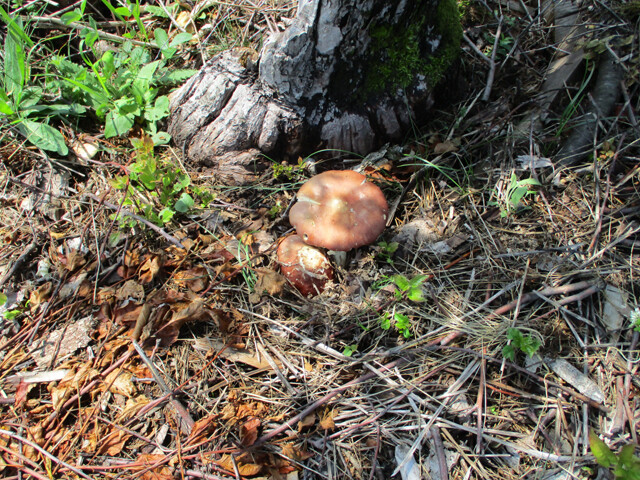 And most important the tree is looking healthy. Even managed to grow a few apples (lost most of my apples this year to the late freeze during blossom time). Bark is looking better and no new dead branches at the top. No sign of Honey Mushrooms. I’m hopeful, and enjoying the Winecap harvests. Sue

6 years after inoc under my trees im still getting some clusters pop up here and there. give them some fresh woodchips every spring and they will keep producing.