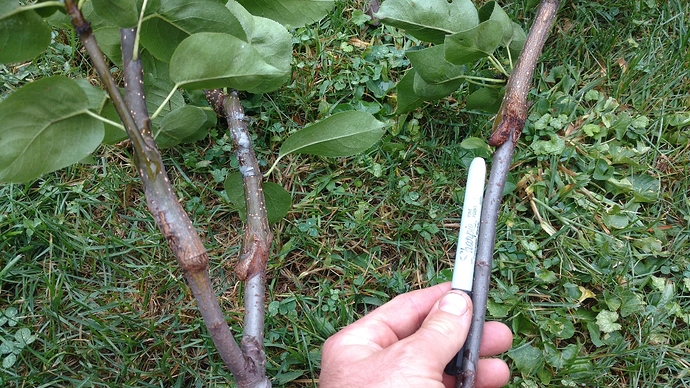 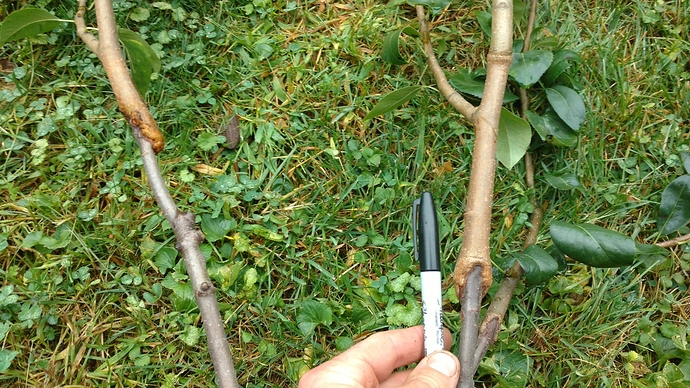 Pulled them out of the potted plant jungle for a photo today. Korean Giant on top, Seckle below. Scions are rapidly outgrowing the rootstock. I doubt long term success, considering this is the difference in 1 season.

You could bury the tree beyond the graft union and root the scion portion of the graft. It would form a standard tree. Sounds like your best option to me.

I have no real reason to save them since I have these varieties elsewhere already. This was just an experiment.

Thanks for posting the experiment.

So 1 year in, the seckel on Aronia rootstock is blooming. Not exactly scientific, but given my limited experience and reading this is much earlier than normal for Seckel.

Interesting thread. Googling pyronia turns up this cross between pear and quince, but no aronia cross yet. I’ll keep looking. https://academic.oup.com/jhered/article-abstract/7/9/416/879670/PYRONIAA-Hybrid-Between-the-Pear-and-Quince?redirectedFrom=PDF

It seems like people have made every possible cross except pear x aronia. There are a lot of interesting hybrids here. https://www.agroforestry.co.uk/wp-content/uploads/agnews-sample/AGN_sample.pdf

Perhaps I just misremembered, always possible! Check this out, too: http://www.ars-grin.gov/cor/presentations/Intergeneric%20Pomes%20HTML/IntergenericPomes_frame.html

Kelby,
Did your Seckel set fruitlets? The first year they may or may not. You can always stake them up so the fruit load does not break off the union.

There’s no pollinator nearby (though maybe an old pear across the street?), but supposedly Seckle is self fertile, we’ll see. 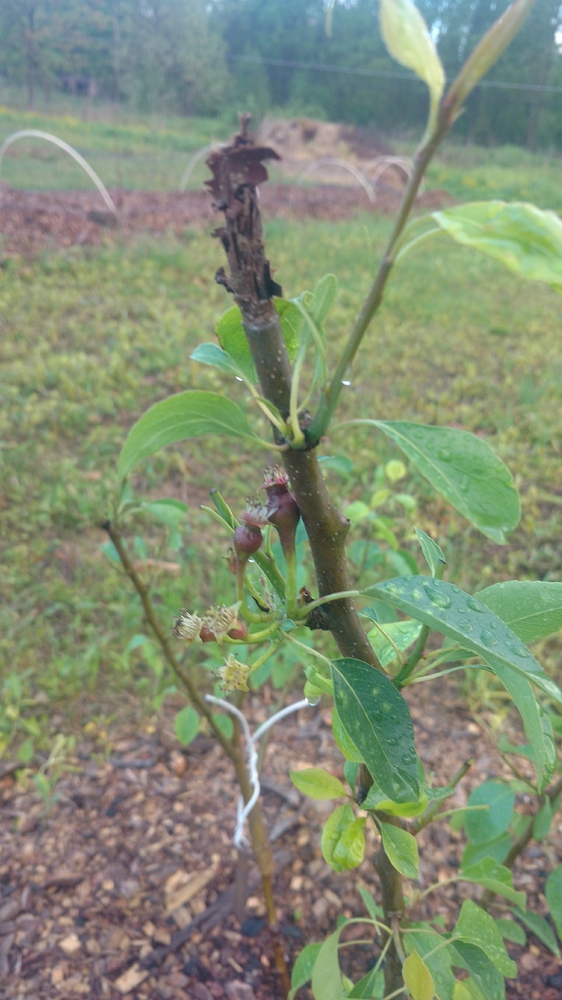 Kelby,
Looks excellent with fruit on it! Great job!

Would be interesting to try aronia is as an interstem…

Kelby I wanted to confirm your experiment results so I grafted a couple of my yellow pear scions on aronia. They grafted very easy and are beginning to leaf out. The small yellow pear I grow does not set fruit quickly so we will see how it goes. If my results are the same we can assume grafting pear on aronia always causes fast production. I’ve never saw an aronia with fireblight so you likely already know what I’m thinking! We will see what the fruit size is like. 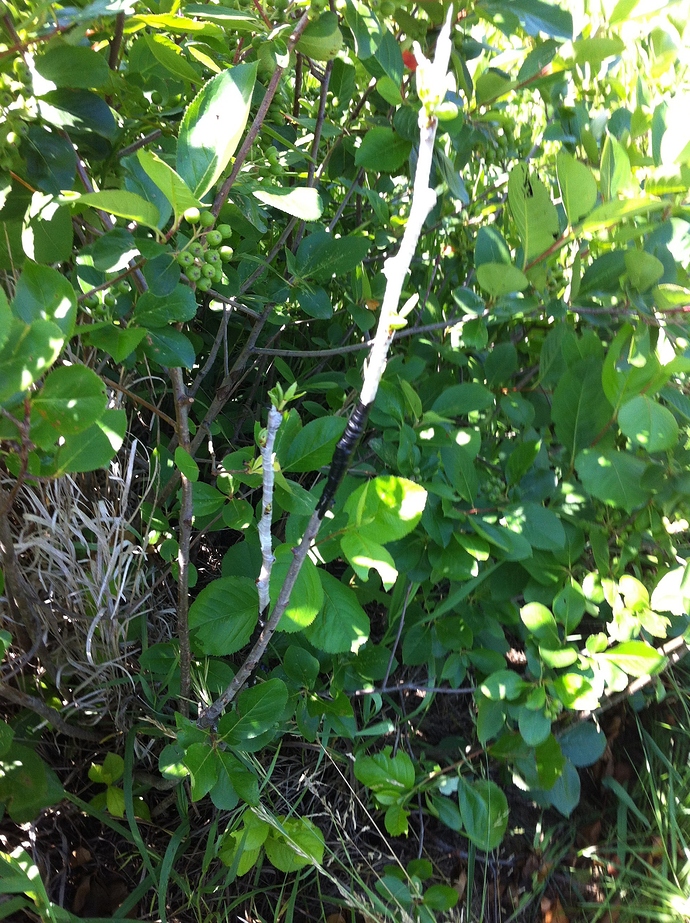 This year i have grafted aronia to apple rootstock 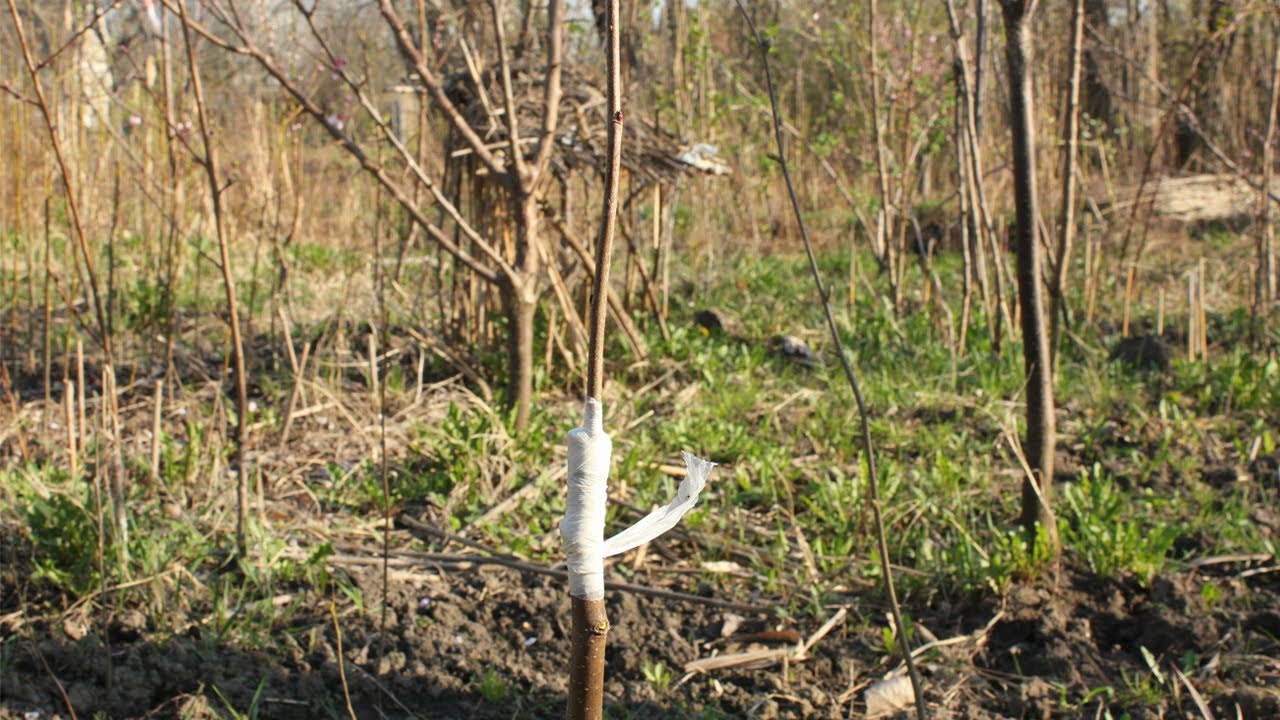 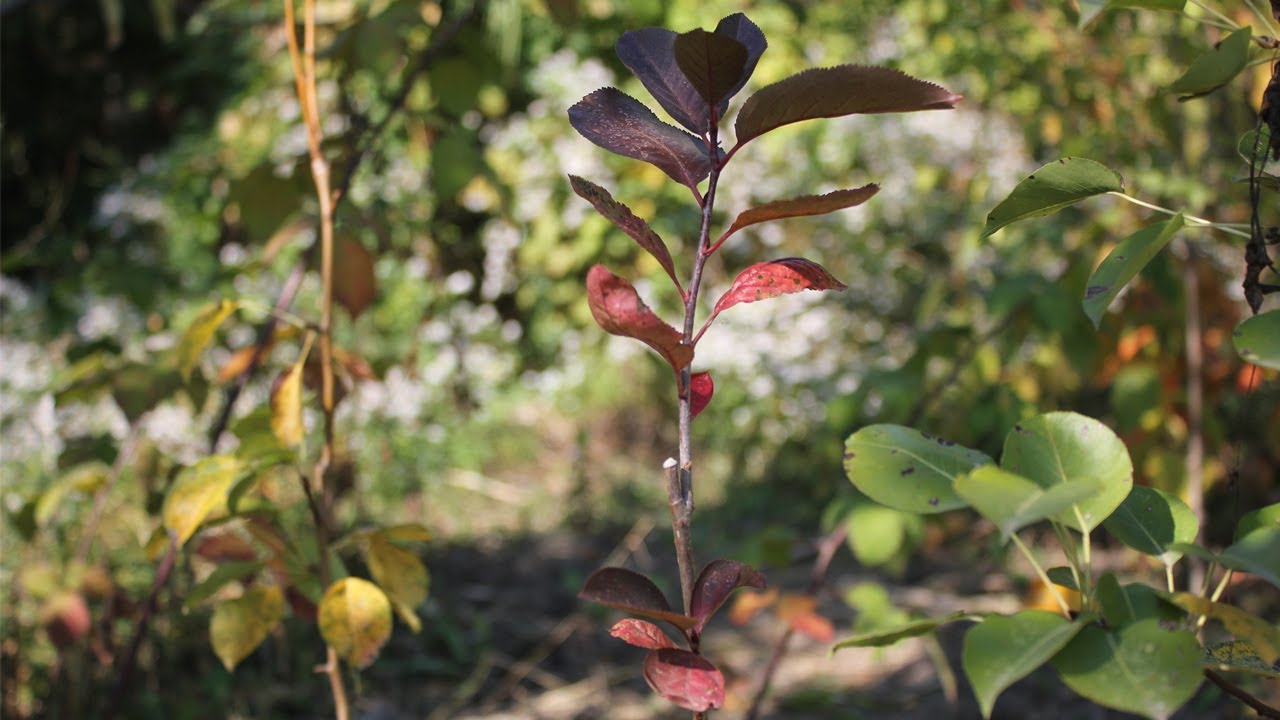 More experience is going to be needed, but I think there are going to be some graft incompatibility issues after a few years. I’m seeing literally no root growth on the Aronia and the scions rapidly outgrowing the rootstock. Probably a phloem/xylem issue, sugars aren’t getting to the roots.

My Shipova on Aronia is exhibiting similar mismatched growth, though not as severe as with pears, and is very poorly rooted. I’m going to have to stake it, keeps leaning further and further.

Just be wary if you try this!

Yeah, I have a few European pears and Shipova on Aronia. They seem healthy but the cultivars are about twice the diameter of the Aronia after a year or two.

Very interesting experiments! I’ve read a bit about similar trials, particularly using cotoneaster, from the folks in Alberta and old publications, and they stress the key to success is to keep some nurse rootstock growth (kept trimmed down so as to not outgrow graft) to feed the roots. Wonder if that might help with the aronia? Sue

Bernie was doing a lot of work on cotton easter in Alberta. Bernie used pictures of a pear i top worked as well as a tutorial for the group. Bernie is better known as the gentleman who imported the cold hardy Russian pears into Canada. He has done lots of work to promote pears and i’m very impressed with his results. Here is a place to start reading about his work Compatibility grafting? - #47 by clarkinks & here is when i learned of the russian pear Krazula in 2015 being for sale Krazulya Pear - #2 by clarkinks
Here is a history of some of Bernies work Russian pears for zone 2 - some info I found
This is Bernies corresponse from 2003
" NAFEX] New Ultra Hardy Russian Pears

> A friend in south western Siberia, near Barnul told me about very new Russian pears that have been just released after a very long (several decades in some cases) breeding cycle. Apparently pears are very much more difficult to breed if you want excellent quality and excellent hardiness than apples. Pyrus Ussuriensus, the Siberian Pear which is hardy to -50F and colder, was always used in the crosses. There were many F1, F2, F3 crosses to get the quality of a european pear but the hardiness of the siberian pear. The pears are at the “Lisavenko Horticultural Research Intstitute For Siberia” in Barnul, which is in south west Siberia, and also at the arboretum at the University of Chelyabinsk, in Chelyabinsk, Siberia. They were all developed in Siberia, and all apparently take at least -40F and then some without damage. The newly released pears are so new, that apparently many people in Russia are not even aware of them. > > These pears, according to the descriptions, are impressive to say the least. A golden delicious apple, which does grow in southern Russia, is rated 4.5 out of 5 in their taste tests. These new pears are 4.5 to 4.9 out of 5 in terms of taste, ie fully commercial quality. There are about 20 of these pears just released. A few of the names, and comments, translated from the Russian: > > Krazulya (Beauty), tastiest of the early pears, ripe mid to late August, 4.7 out of 5 taste rating. A summer pear with excellent sweet taste with a hint of spice. > Kraznobokaya (Red Skinned)- easily handles -45C (thats about -50F!), tart when ripe in late September, but stores very well, and becomes a 4.9 out of 5 taste in storage. Large, to 200 grams (a supermarket apple is about 130 grams) > Decabrinka (of December) large, to 180 grams, ripe late September, stores to the new year, 4.7 out of 5 rating. These are just 3 of the 20 or so. Others have names (translated into English) Late, Hanging, Sweetie Pie, Taiga Forest, Rich, Northern Girl, Fairy, Secular, Oval, Rainbow, Lel, Perun, Swarog, Kupava (names of early pagan Russian deities) and a few others I can’t recall. > Because of the siberian pear used in their ancestory, siberian pear is supposed to make an excellent and ultra hardy rootstock for these new varieties. > > I personally have contacted the Agriculture Canada stations at Morden, Manitoba and Kentville, Nova Scotia so they can import these pears to Canada for testing. Unfortunately, Russia is in near chaos now, and their faxes and letters remain unanswered. Perhaps some of the US folk on this list, especially those in the colder areas with an interest in pears, might be interested in contacting the US authorities to import these trees for testing to a US government facility for spring of 2004? I have no further info on phone numbers or addresses other than the info above, so they will have to do some digging for contacts, phone numbers, addresses, etc. on their own. It would help if the people calling spoke Russian as well. I would suggest a phone call by a US government agriculture official who speaks Russian, as mail and faxes are not being answered, according to the Agriculture Canada people up here. Good luck on it all. This might be a worthy project for someone in the US interested in these pears, to get the trees over to a US government agriculture test facility for testing in spring of 2004. Our Canadian officials seem stymied, or perhaps a bit too placid to follow things through more tenaciously, but perhaps “good old Yankee ingenuity” can get these trees over to North America for testing. > Bernie Nikolai > Edmonton, Alberta >

@clarkinks
Any updates on the pears on aronia rootstock?

Did the fruit ripen?