Ashmead's Kernel vs Roxbury Russet - what to choose?

I gave up the idea to plant my dwarf Antonovka next year in the crowded area I was going to, and decided to plant it on other side of the house with stone fruit, where I just removed a plum tree. But I worry there will not be enough pollination, so I want to try to plant two dwarf apples in the same hole(only place available). One would be Antonovka on G16 (only choice available). The second tree I want to be a russet tree, and I am buying both from Cummins nursery. I ended up with two types: Ashmead’s Kernel or Roxbury Russet. Ashmead’s Kernel available on G11 or G41, and Roxbury Russet is available on G11 only. According to compassing chart G16 and G41 are closer in size than G16 and G11. What I don’t know is how much important it is. The trees go in the same hole, so I guess they should have similar root stock habits to minimize the competition impact. For the taste, I didn’t try either of apples(I think), I just love russet apples but what I tried so far was unnamed. If I have to choose between a little better taste and significant production increase I will probably choose production over slight change in taste quality. What do you think I should plant and what root stock?

THEY ARE BOTH FANTASTIC. Graft them if you have to…

But if you put a gun to my head ASHMEADS KERNEL but, please don’t make me choose.

So, will it worth to to try three in a hole? I am afraid it is too much… Antonovka has to be planted- it is my nostalgia

Give it a shot. I can send you wood for both this winter.

so, you mean to plant Antonovka only and graft on it? I never grafted… I mean - never. Can’t even use knife properly… I should see if my husband wants to try it. He is much better with hands than me. But thanks a lot on your offer!

Can you explain please? You mean it is not good to plant apple between plum and apricot?

The spray regimens are different, and the timing

My apples are later than my J plums and cots - after petal fall on the stone fruit, I want to spray against curcs, but I fear the insecticide drift to the apples in bloom

Roxbury Russet is a triploid. It can be pollinated by Antonovka but will not return the favor.

Both are good apples, but I like Roxbury better.

So I guess I don’t understand why if you already have one rootstock in the hole, you wouldn’t just graft other varieties on to it vs plant another tree in the same hole. I suppose having two rootstocks/trunks add some redundancy and thus makes the area a bit more resilient if something happens. But it seems to come at some expense and potential crowding.

I think Ashmead’s is about as good as it gets for an apple. But for the tree, Roxbury might have the edge. I understand Ashmead’s is often not very productive, and has much lower vigor than Roxbury. I have both, on G11/M111 interstem, and the Roxbury set some fruit in year 2, here in year 3 both of them set fruit. The Ashmead’s tree is not doing so hot so I took all the fruitlets off until it gets stronger. At least in my location Roxbury didn’t get as many CAR spots, and has put on more growth faster than the Ashmead’s.

Roxbury fruit is also very good, it is definitely one of my favorites. For the productivity and ease of growing I’d probably go with Roxbury. As Matt points out the pollination aspect is something to think about ahead of time with a triploid however.

OK, I guess I have to educate myself on pollination rules. I thought if one tree can pollinate another, then backward is also true. And as I learned it is not the case.

Steve333, simply because I can’t graft. Just can’t. Have no idea how to do it, inpatient to try and error and loose interest if something is not going as easy as I want - not the best qualities for orchard grower, I know. My best bet is vegetables, you can see your errors in days, and sometime have time to correct them in the same season, or at least next year instead of waiting several years to see the unsatisfied result

HollyGates, thanks for the info, but looks like neither of the trees I picked will work as pollinators for Antonovka.

How about a Golden Russet apple? I have one and I like it. It’s an American apple.

Yes, this one I started with, but then found that Roxbury Russet is similar, but more productive. Orange pippin trees site list it as compatible with Antonovka both ways, though it is in next flowering group, is it important?

I think that may mean that golden russet will over flower I to the other apples flowering time. The go.den russet is more of a tip bearer, but seems to have apples other than its tips. This is my first year grafting and believe me it’s easier than you think and you can learn now and throughout the year or two before your tree will be big enough to graft.

Is there any apple trees close to you now? It seems like every other house around here has some sort of crab growing in their yard and they make good pollinators for any other apple tree in the area. 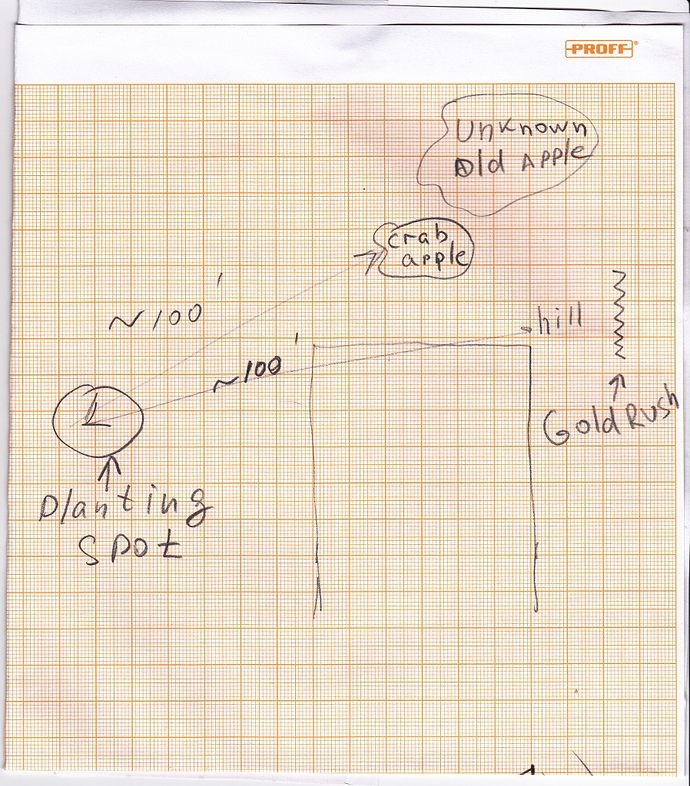 IMG (898x1024).jpg898×1024 612 KB
GoldRush planted this spring on espalier, I was going to plant antonovka same place, but after site cleaning figured out it is too tight, I have to plant it in the shade of my neighbor’s shed if I want to plant it in the same place. And that site has crab apple and some other very old huge apple tree that produces red apples near by. They do not know what tree it is.
chartman June 14, 2016, 10:59pm #18

I think you are set as far as pollination is concerned for your new plantings. I would plant what you want and not worry about what will pollinate what.

Really? What a relief! Crab apple will take care of everything? And distance is not an issue too? Thanks a lot!

Any diploid apple can pollinate Antonovka, if the bloom times overlap. Just not triploids. Most apples are diploids. Tripliods are rare. Ironic you picked two triploids, very small chance you would do that.

It just so happens that many triploids are disease resistant, vigorous, and good-tasting.

Any diploid that is a mid-season bloomer will pollinate Antonovka.

Goldrush is a late-season bloomer, and you have it located 100 feet away-- a longer trip for the bumblebees.

I agree that Golden Russet from Cummins is a good candidate. It is delicious; ripens around the same time as Rox and Ashmead’s; and Golden Russet is a mid-season diploid bloomer-- good for pollinating Antonovka.