I have had them in the past but not to this degree. Don’t believe that rumor that they only attack weakened trees and already dying wood. Weakness does invite them but I am seeing some perfectly prior healthy trees attacked. Trees with no freeze damage and with no visible stress. I have had issues in prior years mostly on fig and pomegranate and often on trees with freeze damage. They did kill a Shangri La Mulberry prior and after seeing my last 2 remaining Apricot wilted on death’s door I am pretty sure that’s what killed my other 2 cultivars last spring and I just did not notice the frass extrusions. The sawdust composed toothpick like telltale signs can be easily wiped away in spring rains and winds.

Really thinking this is my worst pest now as much as I hate SWD at least they don’t kill the tree and in my observation The fungus spread by the female beetle has killed many/most infected plants. I have had some figs rebound in prior years if I cut to the ground, but mostly I have observed complete death on Pomegranates, apricots, and Mulberry. Mulberry are tough and to kill Mullberry even roots is problem.

In the last few days I have observed the frass extrusions and wilting on a couple healthy established pears my Blake’s Pride and Shinseiki. Both my Montmorency Cherries, and several of my Carmine Jewell Cherry. My Tomcot and Robada Apricot. I already lost Golden Sweet and Orange Red last year and now I am pretty sure to this pest. My Sunflower and PA Golden Pawpaw have the Frass bored holes as well, and a couple other Mulberry along with many figs and pomegranates. I was really surprised to see them on Pawpaw, but I guess even the Pest free fruits and not even safe. I am pretty sure if I walk around again this morning I will observe newly attacked plants. I am trying some Permethrin treatments but as I read more seems once they have bored the holes treatment to futile. Will be pruning back some plants hoping the Killing fungus has not spread widely yet, but really hate the thought of pruning some of the trees way back, but will most the figs and Pomegranates. On the larger trees like pears just hoping they can somehow fight it off. I need to do more reading on this pest after seeing damage on things I don’t normally spray.

They are the absolute worst. I spray everything with a dormant oil and copper right before things start to leaf out. I added a pyrethroid to the mix three years ago and have not had anymore problems. It is always a stressful time in late winter early spring timing the spray right to make sure you are not to early but also definitely don’t want to be late. I also worry every time we have a warm spell in the winter. I have lost plum, apricot, pawpaw and pomegranates. They must really love apricot, mine must of had over 2 hundred beetles in it.

I’m so sorry to hear about your trees.

I had just read an article about this on Walter Reeves’ website a week or so ago. Maybe you know everything he suggests already, but just in case it might be helpful, here it is: 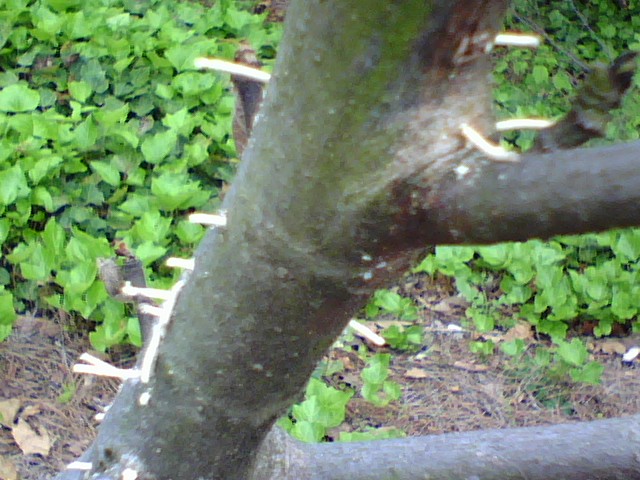 There is no more accurate description of Asian Ambrosia Beetle damage than "Toothpicks coming out of the trunk of my tree!" This boring pest came to my attention in 2001 when a big flowering cherry tree in my back yard just "up and died" one April. I...

Best of luck to you in fighting this off.

I read that same link last evening, but I known very little other than what I have read in last 24 hours. I had some issues in past years wondering if the extreme drought we had last year and officially I am still in might have factored in

Well spoke too soon. Went to move a water hose and saw they hit my hachiya persimmon. This is a tree on the other side of our yard and did not get sprayed. It was also badly injured by the late freeze but was recovering.

I only have experience with one type of Ambrosia Beetle, the shothole borer, the are like mosquitoes and bats they see heat spots and attack those, whenever they attack they are attacking a hot spot on a plant, they wait until it cools down enough to easily see the hot spots of the plants, I am not sure what other things can make a plant look hot in a area of the plant at night besides damage or stress, yet if there is no damage or stress then something else is causing heat spots, and we need to find out what is causing them. Me it has always been damaged or stressed plants so I have no idea what the answer can be for you. The only thing that I have found to work besides butchering the plants to ground, nearly to the ground is to fill their holes with wood glue, I read that fungus needs air to live and of course beetles do too, somehow it’s working at keeping my tree alive, even though they keep re digging the same holes over and over again after the glue dries. Eventually they try digging new holes when enough glue is put in and over their holes. Our attacked tree, attacked every day for a while now is filling with vegetation slowly.

If they are attracted to heat can’t they be lured using heat?

I had them go after my figs really bad last year, I attributed it to a large ash tree that is in decline and also trees of heaven that were dead standing from hack and squirt a couple years ago. I ended up injecting each hole with tobacco extract to kill them. Some trees still appear to be health this spring but most lost those growths either during the summer or this winter.

This year I have only seen damage on one tree so far, but have found 2 of these SOBs crawling on me outside already so I made a couple of basic traps today to see if it will help with them at all. All I did was take some freeze killed fig trunks and drilled the pith out a little bit, filled with grain alcohol and capped them. But from what I read the University of Florida will pay 50 cents per beetle, no questions asked for the first hundred beetles, and they will buy more if they like your beetles. So I will make some of the bottle traps also.

Hmmm maybe if you the heat was not everywhere, if someone created something tree like shape and there were hot spots like a tree would have. After all I noticed that they wait until it cools down some before they attack.

Really, another invasive pest to eat and kill our trees? Awesome! By the time we get done with Emerald Ash Borer, Asian Longhorn Beetle, and this Ambrosia Beetle, we will have only the black locust left, I think.

After that, we’ll probably have to contend with seven years of famine and rivers of blood…

3 out of 9 apple trees hit this spring by ambrosia beetles… One of them was weakened from something else, and it’s now dead, chopped down, and removed from the orchard this morning. The other two were perfectly healthy. The most vigorous of them was hit especially bad. These other two are still living and blooming heavily.

Has anyone come up with an effective treatment for trees with borers?

I’ve read about prevention using insecticide, which I’ll start next spring. What I’ve also read is that trees in wet soil are more susceptible. Nothing I could do about that this winter and early spring with our near constant and often heavy rains.

I lost few trees to what I think was ambrosia beetle 2018. All the trees just gave up and died. Last year I started to spray Sevin on the trunks around mid March and kept doing that every 3 weeks until July. I didn’t spray the entire tree. Just the trunks. None of my trees died last year.

Further investigation revealed that two of my pawpaws were also hit. I sprayed Sevin (the new zeta-cypermethrin formula) mixed with twice the recommended amount of sticker on the trunks of all the apples, pawpaws, and pears this afternoon.

Before spraying the Sevin I applied tanglefoot to the holes of the borers. My theory is anything emerging from those holes will get stuck and die in the sevin. I know you aren’t supposed to apply tanglefoot directly to the bark, but desperation led me to try this.

I wish you best of luck, I know how heartbreaking it is to see your trees leaf out, stop growing and just die. This reminds me I need to do another Sevin spray on the trunks.

Have they killed any of your persimmon strudeldog? I’m planting a rossyanka and prok and I’m worried because they killed one of my Figs in North Kentucky.

My persimmon got damaged by a late freeze and then the ambrosia beetles came to finish it off.

There’s plenty of fruit production in asia. Why is this particular pest so much more problematic in north america than asia? Are we missing some parasite or predator that keeps it in check there?