I planted a small bed of asperagus last year. It took forever to come up, I think June maybe. Here it is on its second year. I think it is nice just to see growing so early. Next year I should be able to harvest some. 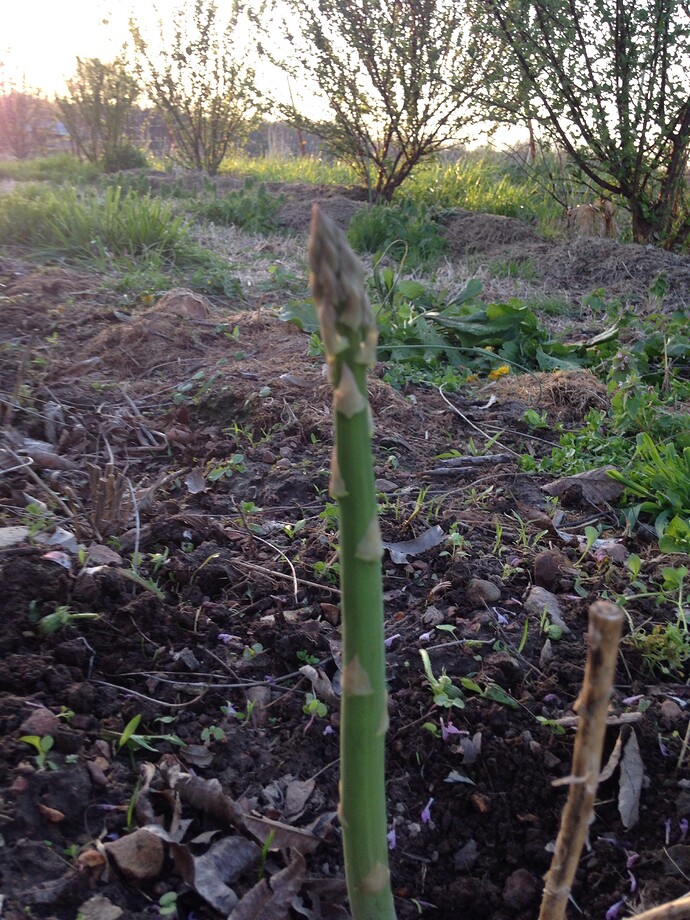 Yes! Asparagus is a commitment and represents a lot of hope. You don’t have to deny yourself until next year to pick some. It’s okay to cut the first spear from each plant in the second year, which this is. Just leave the rest to grow and energize those crowns for a more plentiful crop the 3rd year.

I had read that you could harvest sparingly the second year but I hated to risk harming the plants. Thanks for the tip muddy.

I just started an asparagus thread before I saw yours. Mine are in the 3rd year and I was able to resist picking any until this year, though I’ve read people besides MuddyMess_8a who said you can pick a small amount the second year. For me, after investing a year of time and work already, it wasn’t worth the risk of harming the plants, but it might have been ok. Either way, just let me tell you that Asparagus are well worth the wait! Mine are coming up fast and large now, and to say the are delicious is a major understatement. And like almost everything else, they are MUCH MUCH better fresh out of the garden than they are in the grocery. More tender and not a trace of the bitterness I sometimes detect in store bought spears. I also love that they come in so early-long before anything else in the garden. You definitely have something to look forward to!

New asparagus beds that are harvested too long for the amount of stored energy in the roots, will grow increasingly contorted and scrawny spears.

So knock off harvest if you see changes in spears.

Until I realized how much work asparagus was, we grew 14 acres of Jersey Giant and Jersey Knight. The giant was far and away the best. Research from Purdue showed that you can actually increase the size of your third year harvest by harvesting for two weeks the second year. This really helped with the early expenses of field prep, weed control and crown costs. This might not be so for the open pollinated varieties but it stimulated the hybrids.

Both those comments are interesting. One problem I have is that a seemingly abnormal amount of my spears come up and immediately curve and grow back down in the shape of a candy cane. I’m 100% sure it isn’t because I cut too many in past (or even current) years because I didn’t pick a single spear in year one or 2 (perhaps in error from what chikn said). I have read that this can be caused by the asparagus beetle but I’ve always kept my ferns sprayed and never seen more than a random few of them. Does anyone know what might be causing this? I’d say about 20% of mine do this. Not sure if that’s above average but I think it is.

If your area is windy, blowing soil particles can do this. It can also be from last years’ spears cutting or damaging the new spear as it emerges. Asparagus beetles will cause this damage also. When I see this I will break that spear off. Resulting spears are usually good.

If your cutting spears you may be damaging unemerged spears with the knife.

Thanks chikn. No more than I have I usually just break them off so its not knife damage. However, when I break them off slightly below the surface I do sometimes see areas on the bottom end of the spear that looks like it might have been eaten on. If it is asparagus beetles, is there anything I can do now or do I just treat the ferns later on? thanks

AB usually works on the spears, above ground. On those really curly ones I’ve always wondered if the damage maybe beetle grubs, June beetles etc. They were infrequent enough that we never really worried about it. Anything that I’m going to eat I don’t want an insecticide too close. When AB gets heavy, you have to spray because twisty and bendy spears don’t sell. If they are bad, pick close and spray then so you will have 3-4 days before you pick again. Use a labeled pyrethroid.

Until I realized how much work asparagus was, we grew 14 acres of Jersey Giant and Jersey Knight.

Can I ask what was so difficult about growing the asparagus commercially?

I just grow a small garden plot of asparagus and it seems so easy. Don’t have to plant anything. Hit it with a spray for asparagus beetle, easy to harvest, etc. What did you find was the most labor intensive aspect (after planting)?

Harvesting. We picked at least once a day and on warm days twice. Since we hand harvested everything, after 6-8 weeks of daily walking, bending, stooping, carrying heavy harvest buckets you have back and leg problems not to mention the constant finger infections from stubble cuts. We had gloves, but to keep from having carpel tunnel issues you have to grip the spears low and almost force your hand into the dirt to get the best quality spear. We grew about 60 acres of fresh vegetables and after asparagus we had to do everything else required of an operation that size. Because of fiscal considerations(I was broke) we couldn’t afford mechanical harvesters.

You really can’t imagine how long a 800’ row of asparagus is at 630 in the morning. Much less a bunch of them!

You really can’t imagine how long a 800’ row of asparagus is at 630 in the morning. Much less a bunch of them!

Did you sell your asparagus all wholesale or retail part of it?

90% retail out of my pickup. The restaurant trade was for select spear diameters. Very fussy.
I totally get your agony.

Wow!!! Phil that is a lot of work! I can’t imagine trying to get all that picking done, then sell it roadside or at the farm gate. The physical stress, the mental stress; my opinion of you just went from human to superhero.

At the time super stupid.

I have over 3,000 plants and add 300 every year to try to keep up w/demand. It is super slow for us so far this spring with it being so cold and wet. I started using a long handled asparagus knife a few years ago, and it’s a dream. Before that, it was a pocket knife. I got mine from Indiana Berry, but they quit selling them. Still, you can find them on other sites. They are well worth the money and work great as long as you keep them sharp.

I can not imagine how much effort would be required to grow 8 acres. We grew several acres 25 years ago. We started with the Princeville strain of M Washington and added Jersey Giant later. What a bunch of work for a small amount of money.

We sold ours by the bunch at a high end farmer’s market for $2.50. We did not weigh each bunch, but we tried to average a little less than 12oz per bunch so we could get about $3.50/pound. We picked in gallon buckets, filed the buckets with a few inches of water and kept them in the walk in cooler until Saturday. We never hit the 2000 LB/acre you read about and the revenue did not justify the work.

Do you still grow commercial vegetables?