Attempting to grow Gooseberries in zone 7b

Most of my 2.25 acres are peppered with large black walnut trees so I would like to start building out my black walnut guild this year with some gooseberries. I’m in zone 7b in Maryland, just south of Annapolis. looking for varieties that are mildew resistant and sweet for fresh eating for my children. Thinking of trying poorman, Hinnomaki Red, Jeanne, and Glenndale based on my initial research, but I am certainly open to all suggestions/changes. thanks in advance.

Glenndale & Pixwell can take heat, but 7b may be pushing it.
Nothing ventured, nothing gained…just be sure they’ve got afternoon shade for best shot at them making a go of it.

I don’t have any problems with the gooseberries, but they do tend to look pretty rough by the fall. Hinomaki Red well ripened is pretty good. Pixwell I am not really a fan. Houghton is kind of spicy and I do not rate it high either. Black Velvet is OK. I have many others, but they have not fruited yet. Each variety of gooseberry seems to taste quite a bit different to the rest from my experience. So far Hino Red is toping the charts for me.
I am in Va. So similar environment.

Poorman can take partial shade and the heat. No thorns.

You should consider black raspberries too!

You should consider black raspberries too!

I agree. I found some wild black ones on the property this year. My first time seeing them and boy was I impressed. They are completely different.

They get along well with black walnut trees…the black raspberries do.

Sorry to get you away from the gooseberries though.

I’ve had some troubles with Black Velvet in 6b. Even Pixwell sometimes it gets too hot if they re in full afternoon sun.

My Hinnomaki Red, Friend and Red George gooseberries came through their second Kentucky summer (6b) last year. And I put out Black Velvet, Hinnomaki Yellow and Jeanne last spring. (Jahn’s Prairie went out last year, too, but quickly croaked). All are in full sun. And all have, thus far, done fairly well, with good growth, good bloom set (in the case of the older ones—though these were mostly destroyed by late hard freezes except for a few H. Red berries that made it), and no signs of wilting in the summer heat. I think a deep mulching (I use rotted wood chips, leaves, pine needles and straw) to keep the roots cool is very important.

What does seem to hurt them in hot, humid summers like ours is leaf spot, which can defoliate them by fall. They have shown varying levels of susceptibility/resistance. Friend seems highly susceptible and defoliated entirely by late summer. Hinnomaki Red and Yellow, Red George, and Black Velvet fall somewhere on the moderately susceptible/moderately resistant spectrum; all of these displayed varying degrees of spot infection and partial defoliation by fall. Jeanne—which established marvelously—seems as though it might be highly resistant, as it displayed almost no symptoms of leaf spot infection in its first year, despite being in close proximity to symptomatic gooseberries. I hope some of these cultivars will display greater resistance with age. Next year I will probably apply copper fungicides early in the season.

I didnt say Pixwell was good…just that it will take heat. lol. and sun, and still produce.

I had Pixwell in full sun here in hot Z6 for years (bulldozed when we reclaimed some of the orchard to put in a tennis court)… Lepaa Red, Ore. Champion and others planted a tthe same time (I didn’t know any better) struggled and gave up the ghost within a year or two.

they should get good afternoon shade as I plan to plant along a fence line that has our largest walnut tree (6 foot diameter base) on the east side and another large walnut tree to the south. I like the idea of black raspberries in the sunnier locations along the fence line (southern edge). attached is a map of my property with the fence line in red, black walnuts in yellow and white mulberries in blue. 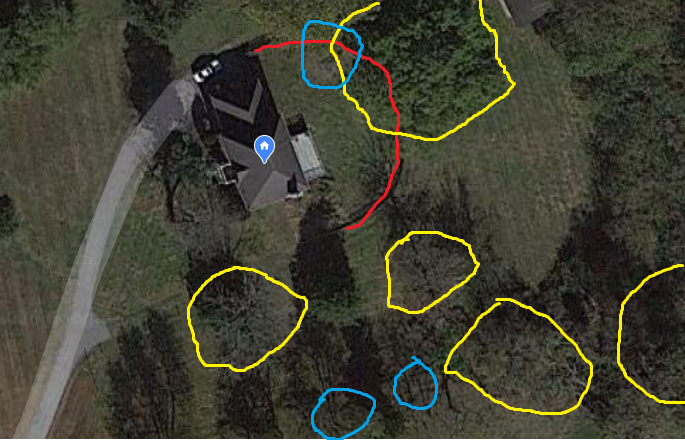 This is roughly my experience. Shade will help, but the leaf spot is horrible and extremely hard to keep under control. Mine generally defoliate despite all the spraying by August/September.

Another vote for Jeanne, only based on research. I just ordered 4 of them from www.ediblelandscaping.com and on multiple sites it has been highly recommended for both disease resistance as well as taste.

According to Whitman Farms, “The truth is I hate most gooseberries: they have horrible thorns and get mildew and leafspot so even the delicious ones are a pain. Well, we may have turned a corner. Jeanne does have tiny thorns but the fruit is large, red, thin skinned, and delicious and the bush is vigorous and pest free. YES!”

Poorman can take partial shade and the heat. No thorns.

My Poorman has many thorns. Jeanne has few thorns.

Ok, I’ll edit that if you like…Poorman has thorns…but not as many as Pixwell, not as many as Black Velvet, and not NEARLY as many as Hinnomaki Red. I’ve not tried Jeanne…maybe I should.

While growing up near Sylacauga AL we would find smaller bushes of what we called gooseberries. They were tart with only a hint of sweetness. I would love to plant a few of these but I have no idea what to ask for as a variety. I don’t know but I always assumed they were native to the area. Hoping you can help me ID this plant and or where to purchase a few. Thanks in advance.
Edit in. I might have answered my on question. Granite gooseberry showed up when I googled it and it fit my location.

I’m not really concerned about thorns. I expect if you plan to plant gooseberries thorns are a given. I have good gloves anyway. more concerned about heat tolerance, flavor, and disease resistance, but not necessarily in that order.

I am in Southern Middle TN, Zone 7a.

I don’t have any gooseberries planted on my place, but considered it a couple years ago. I decided to try JostaBerry instead (a cross between currant and gooseberry). Per catalog description it sounded like they might be more heat tolerant to me, and we have some hot summers here.

I planted two varieties from One Green World, Black, and Jostine. I put them out in my orchard, mostly full sun there… and they did great until the end of July… and then dropped all leaves (despite watering) and the next spring, they did not come back.

I bought two more early that next spring (last spring) and planted them in a location that gets Morning Sun, but mostly shade, partial shade, from about noon until sunset. They did very well last year and I hope to get to eat my first Jostaberries this year.

A location on the East Side of a Tree Line, or house, or barn… anything that provides shade, will get your plants Morning Sun, but evening shade. You might just have some good luck if you plant them like that.

I planted a Loganberry on the east side of my house, and that thing has grown like crazy, 2 plants produced so much growth, covered a huge trellis which I had to expand, and so many berries last year, we ate all the fresh berries we wanted for near 2 months, and froze 15 pints of berries too. Loganberries like morning sun, evening shade. Raspberries do well in that situation too.

If you have a location like that - that is where I would put those Gooseberries.

I’ve heard mixed things about the jostaberry that turned me off. I love the fact that they display hybrid vigor and have better disease resistance as a result, but I’ve also heard that they can take a long time to fruit and the fruit quality is lacking compared to both parent species. too many desirable characteristics of the fruit were lost to get them to be thornless. I’ve heard orus 8 is an improved
fresh eating hybrid, but does have thorns.

This is all just anecdotal so I could be completely off. if you have success, let me know. The only bramble I can grow in this location are black raspberries as they are juglone tolerant so loganberries are a no go as far as I am aware.