I know it’s a very invasive shrub and people don’t normally plant or cultivate them purposely but the fruits are very healthy and nutritious and pretty tasty when picked at the right time. They are quite common here especially near reclaimed mine lands and fence rows. I’d never tried the fruit until last fall and I enjoyed it. I could almost shake the shrub to harvest the fruit. I’ve read that many people use it to make jams and jellys and also fruit leather. It apparently has 17 times more licopene than tomatoes. I ate them fresh from the tree and liked them.

I searched and did not see any other discussions about it. Anyone else take advantage of this abundant food source?

I have cultivated and sold 3 different species and 1 hybrid of Elaeagnus. They are not invasive in arid or semi-arid environments like mine [correction: it turns out they are very invasive in the higher altitude semi-arid regions of southern Utah]. The fruits are good tasting I enjoyed making a sweet-tart jelly from them. I think the health benefits are overblown for anyone who already has fruit and vegetables in their daily diet. It’s not clear that more lycopene is better.

I have goumi, an Autumn olive relative, as well as AO. goumi fruits well for me and the fruits are larger. 2 out of 3 kids, mine, like them. AO has not fruited for me. I have 3named varieties and 1 random seedling. Flowering is profuse, and currently happening, but I do not detect the fragrance (on the seedling one) and fruit set was poor when it was the only one I had.

I am hoping for more/better fruit this year.

Four centuries ago, enterprising botanists made a living by being captain of a ship that traveled between worlds old and new, selling new found plants, seeds, and scion wood. Some of them bred plants inter-voyage. One of these was a Dutch sailor/horticulturist who crossed the European Elaeagnus with the Phillipines species. It is now known as Ebbing’s Elaeagnus (Sunset Western Garden Book) or Elaeagnus ×ebbingei in the formal literature. It is hardy in semi-arid environments with regular irrigation, and quite beautiful with speckled leaves and fruit. The pulp to seed volume is 1-to-3 with good horticultural practices. The pulp is hard to peel so I simply plopped them all into a large kettle with a bit of water and simmered it until the juices could be strained from the seeds. Afterwards I made jelly according to the Joy Of Cooking. This of course, was a mimick of my father’s method in years gone by.

Speedster,
I have grown to value this bush. It is a very heavy producer here. It can be used to make juice, fruit leather, jelly etc. I would recommend removing the seeds via a juicer. What I like most about the bush is it’s spray free, Does not require water (highly drought tolerant), A nitrogen fixer so fertilizer is not required, It produces abundant fruit every year, high in lycopene, It grows were nothing else will, It ripens in the fall when not much else does. The juice can be used for jam, jelly, fruit leather, wine etc. This is the original post where I learned what the bush was Lots of Goumi fruit. I ordered goumi and received autumn berries instead from Lawyer Nursery. They have a very heavy crop of fruit on them this year. They bloomed profusely a couple of years for me before they started setting heavy crops but when they do you could pick a couple of quarts to a gallon from a single bush. Perhaps if I get a 5 gallon bucket of fruit this year I will learn more ways to process them. Anyone else out there been experimenting with recipes? The bush grows very large I’m not sure I even know how big they will actually get yet.

It turns out that early settlers to east central Utah planted Autumn Olive and now it is a run-away invasive species in places like Capital Gorge. 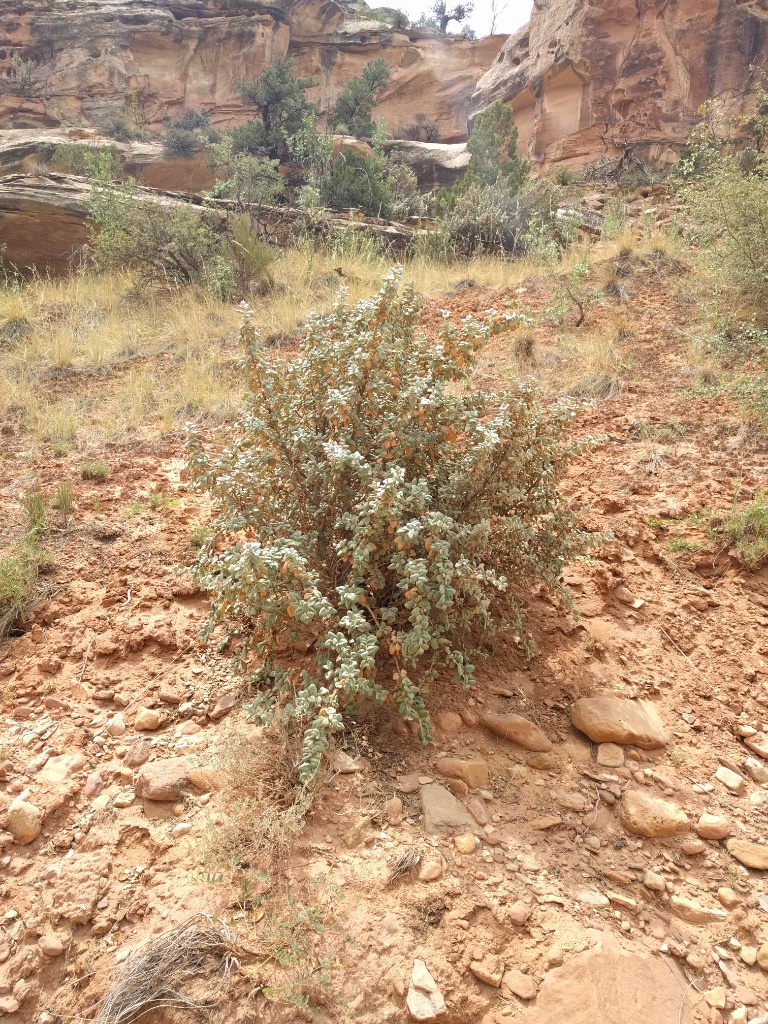 We forage bunches of AO. My favorite way to use it is to run through a food mill to get out the seeds, and then let the pulp and juice separate. Freeze the juice in ice cubes for gin and tonics, and freeze the pulp in one-up quantities and add to spaghetti sauce.
Of course, stuffing in handfuls while hiking or picking is a given.
I am wanting to plant goumi since we like AO so much.

There’s a farm in Illinois developing a line of AO products, but no one else I know, even other foragers, make much use of them. I don’t understand this, cause they are tasty, abundant, and easy to pick! A handful is so refreshing in the middle of a hot hike. Yes, they are tart, but so are cherries and cranberries. I think of them as juicy cranberries.

Oops! This treat is for Autumn Olive, not Oleaster.
I can’t remove this post.

The yields still seem to be increasing! This was last years Planning on a big autumn olive harvest

This was the first year we got anything from our Goumi bush; it’s 4th season in the ground. They tasted like large size autumn olive to me, which is great since I love AO. The kids had fun picking and eating the berries day by day as they ripened. My wife hates AO, and didn’t care for Goumi either. She says it is too tannic. 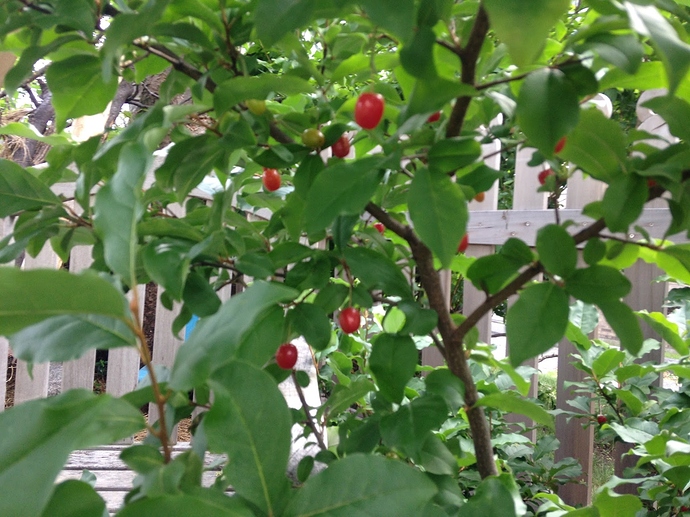 got 2 goumi and 2 AO i planted 3 years ago. the goumi, sweet scarlet and red gem are loaded w/ ripening fruit this year. the AO winter killed above the snowlline 2 years and flowered this year but set no fruit. strange as AO is supposedly zone 3 hardy and goumi is zone 5! I’m in zone 3b so goumi should be winter killed but never lost a branch yet! can’t wait to eat some!

Would love to see a bunch of pictures if you get a chance to post some as they ripen.

not good with posting pics but ill see if my fiancé can put some up for me.

I’m in z3 and AO are just sort of hardy here. They die back in a cold winter but usually regrow. We have enough of them that there’s always some fruiting but it does vary year to year. Mostly I leave them for the wildlife but I agree they’re real nice for walk by snacking.

mine are 3ft high squat bushes as anything higher than that winter kills above the snow line. had lots of flowers this spring but no berries on 3 yr old plants . my goumi are 4-5ft. and loaded with fruit. same age.

Steve, how did your goumi fare the winter? Though we have more than plenty ao I’m thinking goumi might be worthwhile with larger size and possibly hardier. AO is iffy hardy here but last year was super harvest so i made wine. Turned out nice. Maybe i’ll try some grafts next year (goumi on ao). Sue

lost both my bushes . dead to the ground. funny thing is the years the AO had damage above the snow line , the goumi didn’t. while everything above the snow line died again on my AO. at least what was below the snow survived on them and this year they have tons of flowers. i have 1 goumi starting to sprout back from the roots but im reluctant to let it grow only for another hard winter to kill it again. they were such nice bushes too!

Bummer. Maybe I’ll skip the goumi after all. We had some dieback on the AO’s but there are so many of them it hardly matters. It helps that they winterkill here some years but never all of them and they always regrow. If I only had a couple bushes I wouldn’t feel that way, of course. We haven’t had enough snow the last few years to be of much help so I doubt goumi’s would be worthwhile.

As irritating as the excessive AO’s can be they are beautiful this time of year in full bloom, and the smell is almost overwhelming (thankfully I like it). Last year the most entertaining AO was a large bush under a full size wild black cherry, thick with ripe fruit, plenty for all takers. A resident male Pileated woodpecker really took to the berries and it was quite a sight to watch him land on the side of the WBC trunk then maneuver a sort of side-ways flip to land in the AO, bouncing wildly, hanging on and eating his fill of AO’s, loudly (as only a Pileated woodpecker can be!) trying to convince his lady friend to join him, but though she’d land on the WBC she declined to finagle herself into the AO bush. Meanwhile, a chipmunk on the other side of the bush, who had claimed the bush as his own, almost as loudly complained the whole time at the invasion.

So much for the peace and quiet of the northwoods… Sue

I was tasting some wild autumn olives yesterday. I was surprised how much variation there was. Some had larger berries, some had more berries, some were sweeter, some more sour, some bland and one had harder seeds. I grow Garnet and by comparison it is not better than some of the wild ones I tasted. Out of 8 I tasted Garnet was better than only 4. I wonder if any of the named varieties are better than typical wild ones or is it just marketing.