well i thought id get a huge crop of these this year due to the hundreds of blooms that they had but only a few set full fruits. most only developed 1 or 2 drupes . most none at all. i remember some here had this problem with their cane fruit also but i don’t remember what was determined to be causing it. the raspberries 3 ft. next to them had excellent pollination so it can’t be that. last year they had probably 2 doz. flowers and all grew into big beautiful berries. the plants this year did awesome and i didn’t bother fertilizing them as they were so healthy without it. i also have 2 other blackberry varieties within 50ft. of this row that did well without these issues. any idea what causes this? we had a severe drought but I’ve been regularly watering all summer. this is a primocane crop from this years canes.

That’s unfortunate, mine surprised me with a few bigger than my thumb, and now the younger cane, just bloomed. I had several raspberries that only developed a few droplets, that happened during a heat wave, or was it from the beetles at night…

Same here… I too suspect the drought.

i thought that also but they’ve been watered like everything else, every other day , since mid may. everything else grew great esp. the stuff that likes heat like beans and tomatoes. good thing my nelsons gave me a few good sized bowlfulls. if all those flowers had produced i would have been freezing a lot of blackberries.

Mine did the same, but in my case I’m attributing to their age (all 1st year/planted this year). Finally getting a few right now – but also getting frost. Picked one tonight – maybe prematurely, but frost/actually wanted to try one this year… 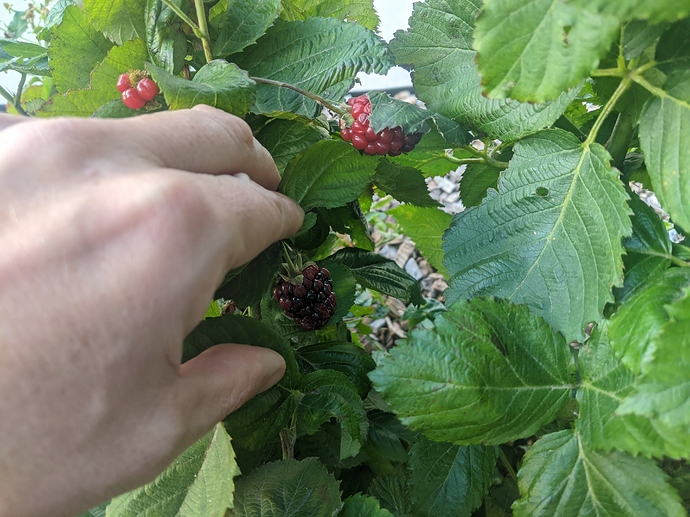 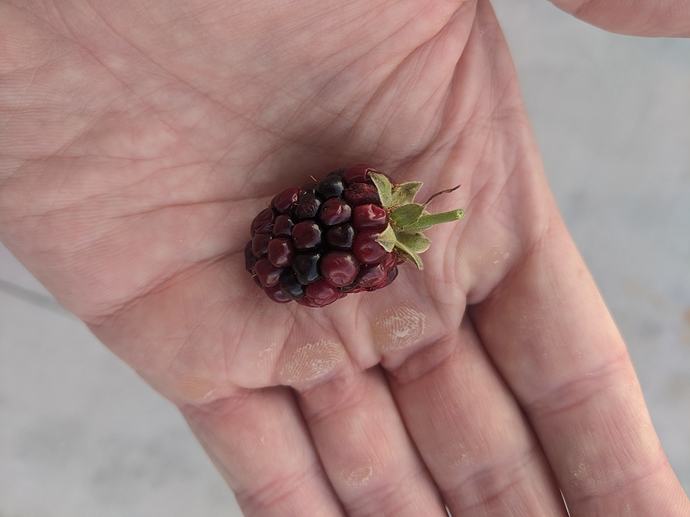 Is it normal for the fall bloom to just stop after one set in the cane? I though that primocanes will fruit down the cane until frost. New plant to me this year, got sent as one cane and it grew a few little ones from the crown (no suckers yet). The smaller canes are now starting the ripen, the main cane bore fruit a while ago, but all the leaves have now turned red, smaller canes are still mostly green

apparently my seasons too short for the primocane fruit to all ripen here. i got a few and the frost zapped the rest. had a huge amount of blossoms in mid july on the floros. but most didn’t develop fruit. would have had hundreds if they had. very disappointing. not sure why they didn’t pollinate. the rasps next to them produced like crazy.

I just culled mine. They bloomed too early, pollinated poorly, had misshapen fruits. The primocanes bloomed to late to set fruit. Nice idea, dwarf thornless blackberry, but it was a disappointment for two years now.

I’m giving mine another season. if they don’t produce next summer there gone as well.

I had mine (3) plants in an above ground planter at 18" tall not come back after a super mild winter.

you get any fruit?

wow if they didn’t produce for you, they sure won’t for me.

Moose, the Baby Cakes floricanes bloomed before any other blackberry. It was also chilly and rainy. The resultant berries just had a few distorted fruitlets. The primocanes bloomed too late. Those had some green berries this week. That’s just too late. To contrast, my Triple Crown floricanes bloomed just a little later and wow did they produce.

Maybe Arkansas berries dont like my climate. Arapaho wasnt worth much for me either, and Prime Ark Freedom is very hit and miss. The berries are huge, with great flavor, but the floricanes dont survive the winter and the primocanes aren’t nearly as productive for me as Triple Crown.

My Blackberry patch is narrowing down quickly to just Triple Crown.

I wanted Babycakes to work. It fits into my human-size fruit garden scheme. But space is at a premium and for me this wasn’t worth it.

Baby cakes did well for me in its second year in north Georgia. Lots of fruit set standard taste.

I had this issue with mine for several years and removed them. Not sure what the problem was. The same thing happened to Osage in the past but my plants set an unbelievable amount of fruit this year. I attributed it to heavy potassium fertilizer I applied but who knows.

I got like (2) fruit and they were also distorted as being reported and while ripe, not much flavor… which I attributed to settling in for it’s first year.

How did 2021 do for those of you with the Babycakes? I had thought of trying them, but the reviews don’t sound promising. So far, only Nelson’s have done well, and the critters also love them.

I had this black berry since 2019, 2020 summer I got a good crop of standard tasting blackberries. Better than store bought. I got like 3 berries for the fall crop, will report back in 2022