I am inspired by @SMC_zone6 ’s and @jcguarneri ’s threads about their orchards. I would like to record my small fruit orchard and talk about our small orchards, things we grow, how we cram as many fruit trees in small spaces, our success and failures, etc.

I call my orchard small because it is on 0.3 acre lot. After the house, a garage, a deck, a shed, a driveway, the actual growing space has been rather limited. I have maxed out my yard with about 30 fruit trees of various types, several are young trees. I know some of us has smaller orchards. Most, if not all of us live in urban or suburban areas. Growing fruit in small spaces often inspire creativity. Love to hear and see those creative ideas.

I want to start with my strawberries grown under jujube trees so both don’t need spray, so far. 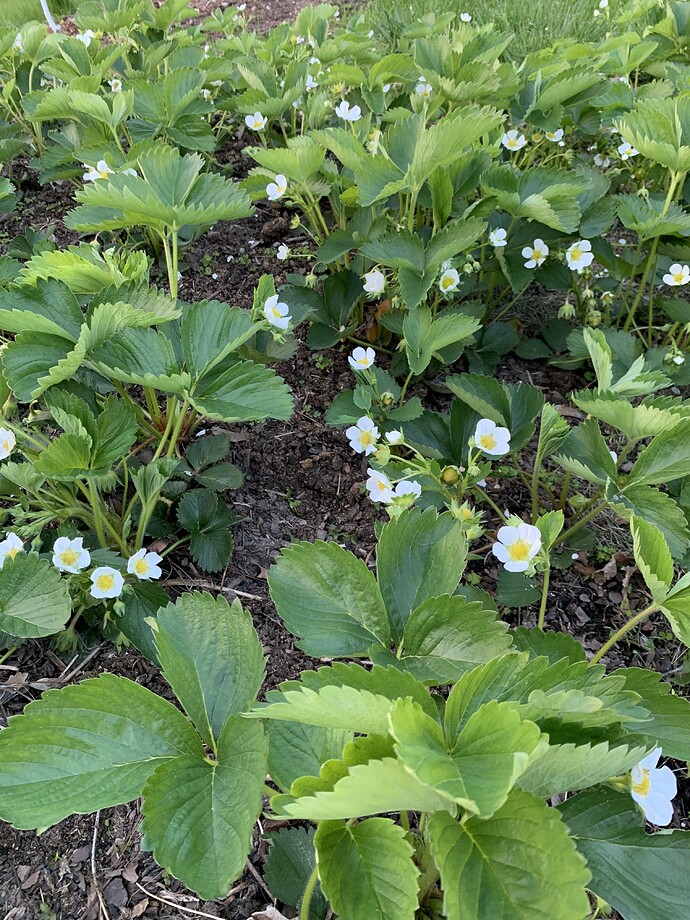 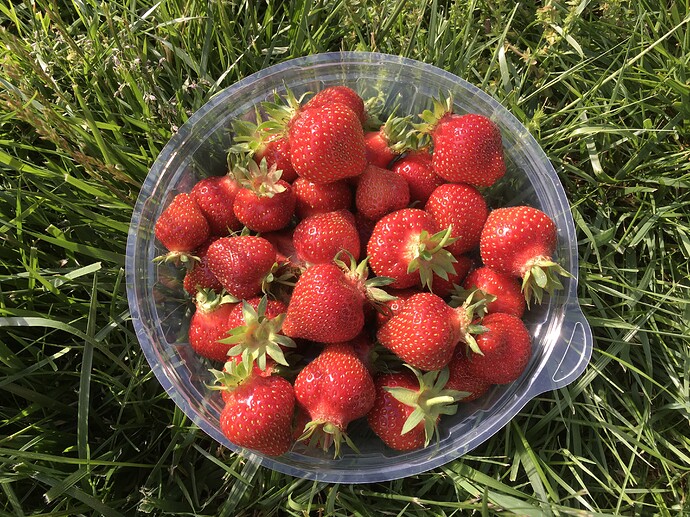 They are June bearers. I thought I had Jewel but someone said Earliglo have distinct necks like these.
image|690x517 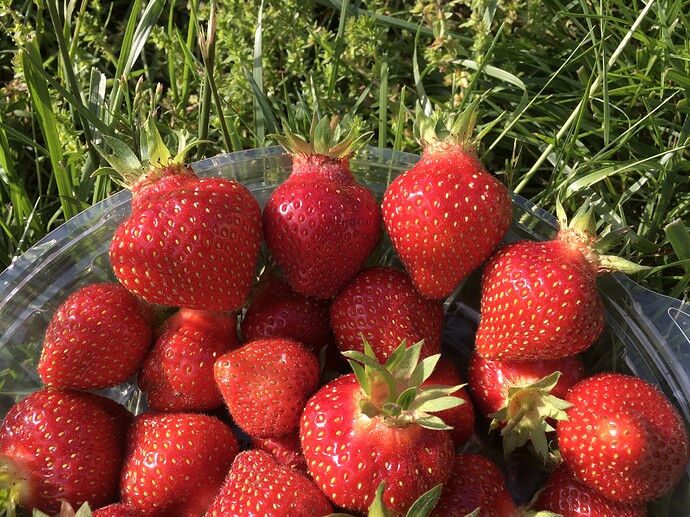 I will chronicle my fruit in their ripening order when possible.

Strawberries are about done. Next will be either apricots or cherries.

Due to late freeze, only a handful of Orangered left. They are ripening. 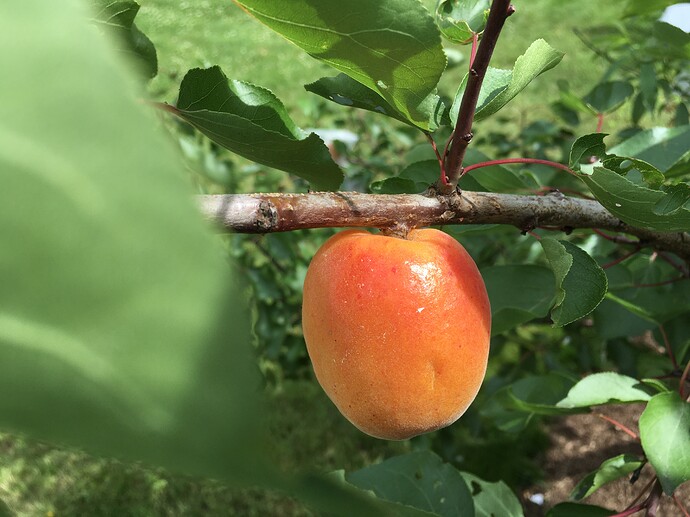 My one and only Florilege is at least a week behind. 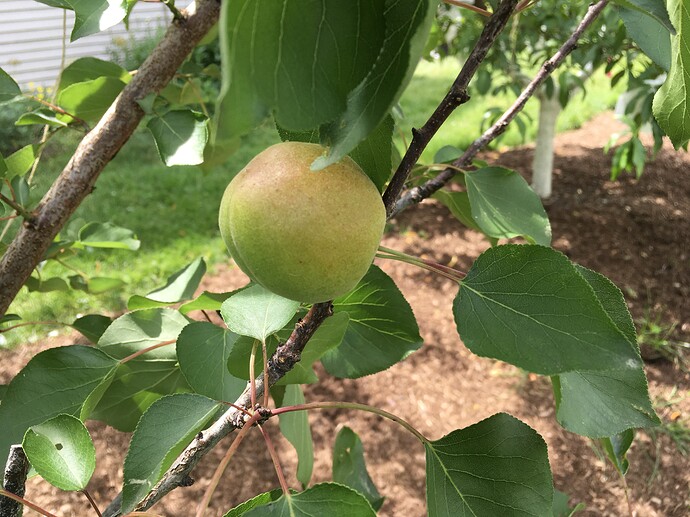 Looking good! You certainly make the most of the space that you have.

I think they are Earliglo. They grow vigorously and have taken over Jewel. I remember @subdood_ky_z6b pointed out that EG has a distinct high neck.

Pictures from Nourse Farms confirms it.

Jewel does not have that neck.
https://www.noursefarms.com/product/jewel_strawberry/

Oh…could be. I’ve grown both, but it was in the 1990’s…Earliglow always a few ripe by May 10th…the earliest berry. (zone 6b Kentucky) It seems very peculiar someone in zone 6 has ripe EarliGlow, especially big ones, (as by the third picking size goes downhill fast for the variety), last week of June.

Only a couple of first rounds of picking that we had a few rather big ones. The rest were small. Its aggressive growing habit and a long neck makes it easier to identify Earliglo since I only had Jewel and Earliglo in that area.

After several days of very hot and dry weather, we are supposed to get a severe thunderstorm tomorrow.

My Black Gold sweet cherry, Carmine Jewel and Juliet are close to ripen. Instead of risking cherry cracking, I picked as many cherries as I could this afternoon.

Black Gold. Most were eaten by something on a daily basis even with the tree is well covered with bird netting. We did not know what ate them but cherries disappeared every day. By today, I have only a lb of BG left. 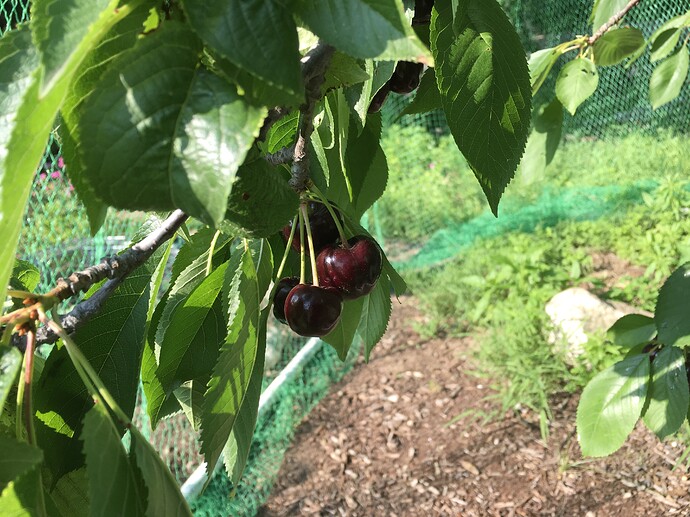 It was sufficiently sweet with brix at 16. Wish texture was a bit firmer. The good news is with 3 spray of Indar, cherries are cleaner than (no brown rot) when they got 2 sprays.

@SMC_zone6 We think of you. Carmine Jewel IS sour. Want some? 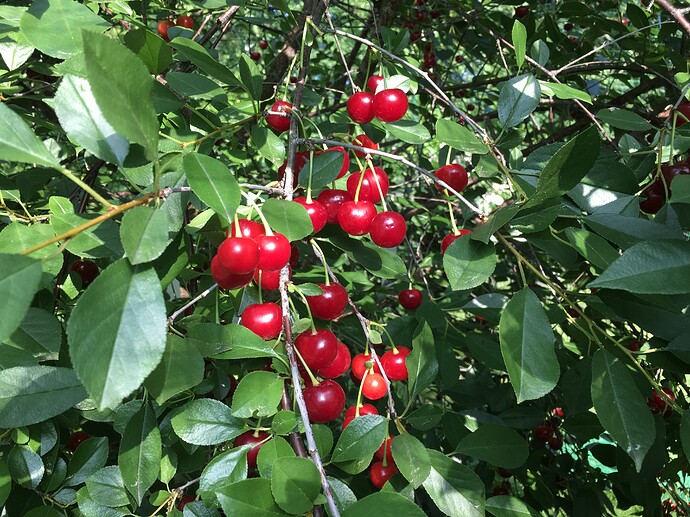 Juliet is a tad less sour. 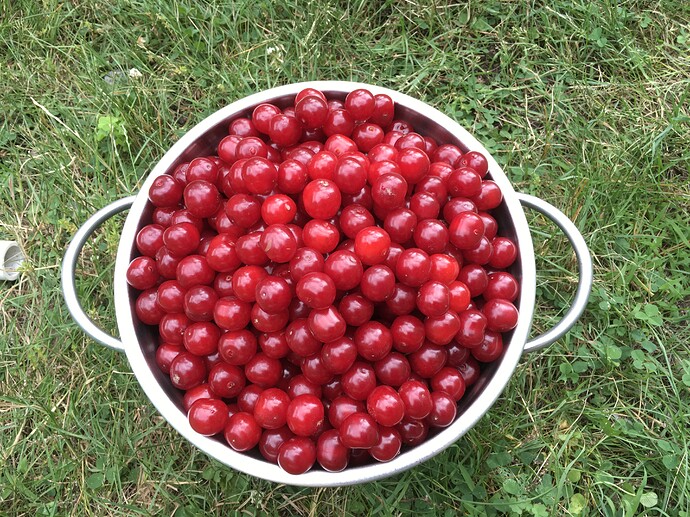 @thecityman - my Juliet are NOT sweeter this year. When compared to CJ, Juliet is less sour and that’s about all I can say

haha. I was anxious to hear what you thought! Now I’m torn…was it just wishful thinking/tasting? Hard to imagine mine really got sweeter, so I just don’t know why I was so convinced that they were much better this year. Oh well…one thing is for sure…you cannot argue that they are BEAUTIFUL to look at. And highly productive. And make some good dished/preserves. I dug up and replanted 11 new bushes from root sprouts this spring, so clearly I’m still a fan in spite of the sourness.

I ate Juliet a few times to make sure my taste buds got it right. They were still sour but not as sour as Carmine Jewel. No disrespect to CJ as a lot of people like it. I can’t eat CJ fresh. I can eat a couple of Juliet. That’s about it.

don’t get me wrong…I still wouldn’t want to just sit down and eat a handful of Juliet like I would a sweet cherry…they were still definitely too sour for that. But the first year I tried them I just couldn’t even eat one- it was unbearably sour to me. This year when I’d walk by I’d often pick and eat one and found it TOLERABLE. SO I hope you didn’t think I was saying I found them to be a nice fruit to snack on…just saying they were edible this year and I could barely say that the first year. Also, they seemed pretty close to Montmorency this year but last year I felt Monty was far sweeter.

I just ate a couple of Carmine Jewei and Juliet again, when I ate CJ first followed by Jule, I felt Jule was sweet after high acidity CJ!!

I probably will make a pie or two or freeze therest to make jam later.

That sounds more like my reaction…and mine was after eating Romeo so that may have been what made me think it was sweeter this year.

I just looooove the intense cherry flavor of romance cherries as juice. I do a very runny preserve/concentrate on 1 cup jars, plenty of sugar on it. When I feel like having juice I dump it in a quart jar and shake. Oh so good… Cherry cheese strudel with a flaky crust and good coffee, Good eating doesn’t get much better than that.

I just don’t feel the temptation of just eating them raw. To me that’s not what they are for.

I think my sour cherries will be for processing only.

@IowaJer saw my sour cherry pics a while back and stated I could get the pic mixed up because Juliet is brighter red than Carmine Jewel. He probably is correct. He has tons of experience with bush cherries.

I tend to keep my cherries on the trees along time.
Juliet. 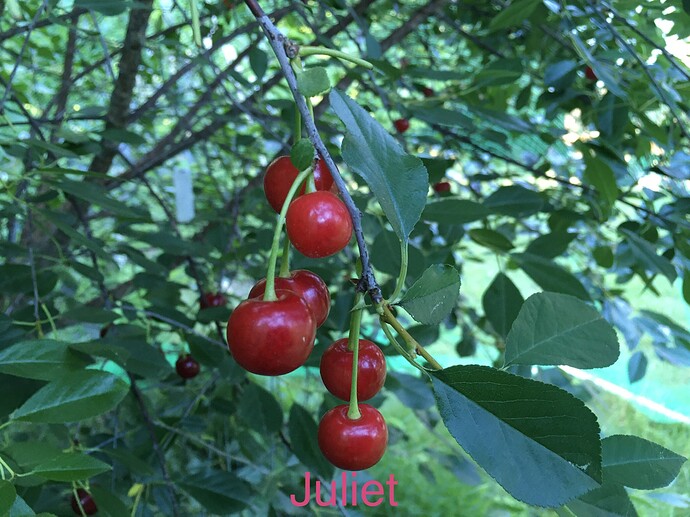 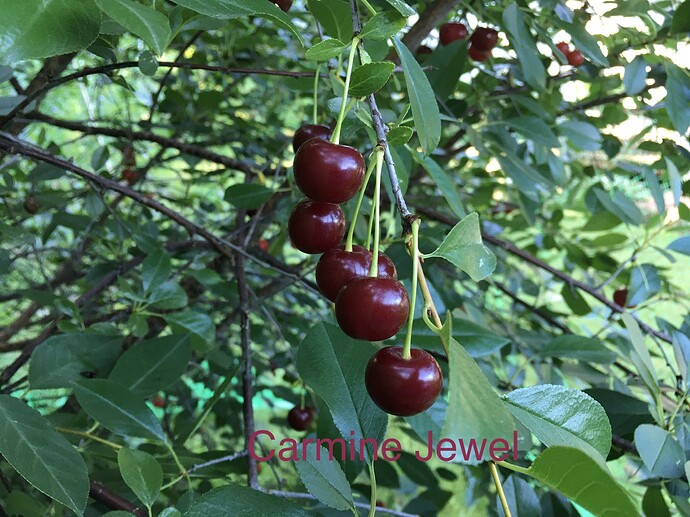 As a result, I have also had Juliet that were similar in color to CJ. The only way I can tell is Juliet is usually bigger. 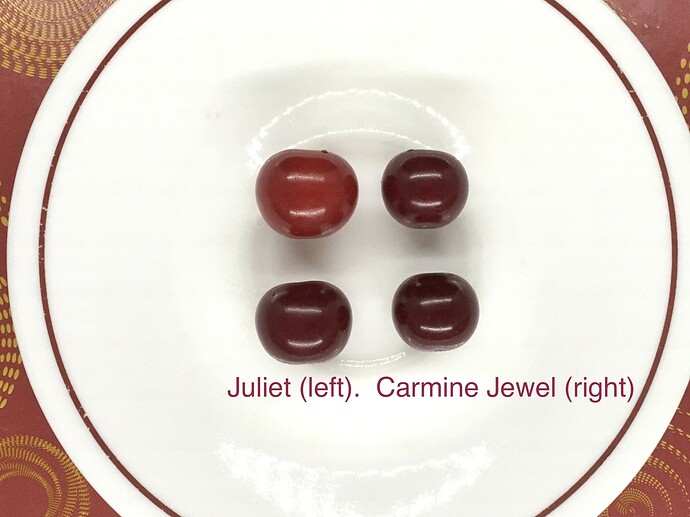 In the pic below, Juliet were the top two and CJ were the bottom two. 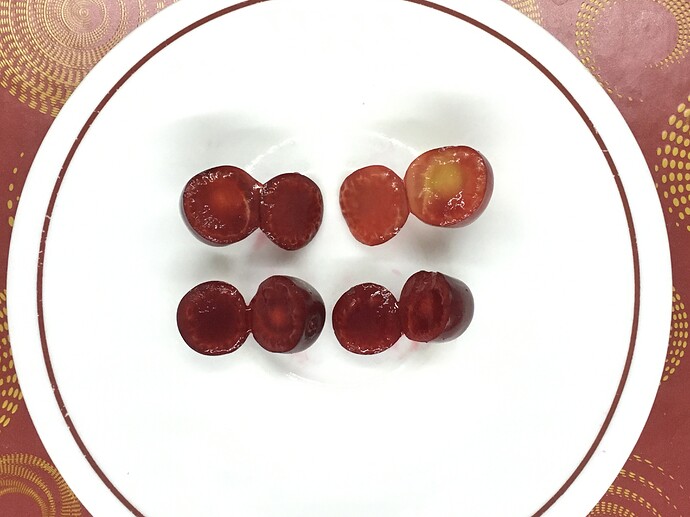 I lose all my cherries to ants.

Regina - @Rosdonald and I had the chance to get together yesterday. We correspond regularly and have become ‘pen pal buddies’. We have a lot in common . . . the fruit, of course - and we are both artists.

She lives out near Charlottesville and I am near Va Beach, where she is vacationing with her family . . . so we planned a ‘meet’. She came to lunch and we spent the afternoon ‘baking’ out in my orchard and then went to - of all things!!! - PICK PEACHES at a U-pick place nearby!

It was very interesting for us to see how this orchard’s trees were shaped - and how much fruit they allow to form, etc. Neither of us thought to take our camera’s out into the orchard (darn). We wanted to travel light - and just didn’t take much except our collection bag.

The trees were huge - although not too much older than mine. They were all misshapen and had huge limbs hacked off. Fruit was very thick and allowed to weigh down limbs to the point of dragging on the ground! Kind of looked like an ‘original’ training method (LOL) - not quite vase - not quite central or modified central . . . just haphazard. I guess with that many trees it’s tough to maintain form. ?

We managed to pick some almost ripe fruit - and really enjoyed seeing so many trees at once and how they were ‘cared for’. 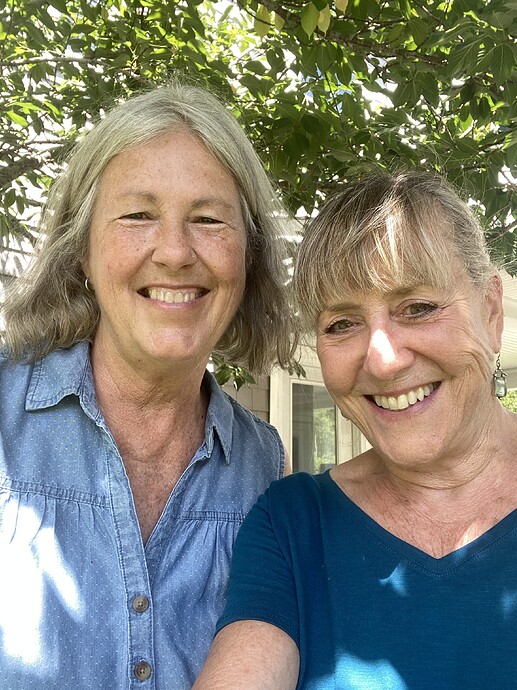