Wasps are becoming a problem again in my region and even honey bees are exploiting bird pecks in fruit to find nourishment. I use the Victor reusable trap and have long used apple juice concentrate at about 30% to 70% water as a replacement bait, adding a big of citric acid and dishwashing detergent to simplify cleaning and sustaining bait attractiveness.

I’m wondering about other experiences and whether there is a cheaper and/or more convenient but equally affective bait other forum members use.

Incidentally, I’m aware of the method of using plastic soda and water bottles to construct traps, but I use the Victor traps for convenience and the plastic umbrella that helps keep out rain water.

I started using this bait a few weeks ago, it is super attractive to yellow jackets, and attracts nothing else. I replenished one of my traps on Monday, Tuesday there was 17 yellow jackets in the trap!

The active ingredient is called Heptyl Butyrate, you may be able to find it cheaper at other sources.

There is a source for a dropper bottle full of pure material for about $40 but I cannot determine how many refills that would supply and the supplier doesn’t have contact info although it does have fakespot approval. .Heptyl Butyrate - Bulk Yellow Jacket Wasp Trap Attractant for Traps. 2oz | eBay

It surprises me that there are not more bulk sources available. A can of concentrated apple juice baits 3 traps and last the same 2 weeks. Last I checked that cost me $2.

Supposedly they go for sugar later in the season and meat is disgusting to use in reusable traps.

In eastern US my experience with those has not been as good. Supposedly Heptyl Butyrate attracts Western Yellowjackets but not so much the species found more commonly in the east.

Supposedly they go for sugar later in the season and meat is disgusting to use in reusable traps.

Yes, in the spring they’re all about proteins and mid to late summer go for carbs/sugars. Yellowjackets at least, not sure about other types of wasps.

I’ve tried various trapping methods with limited success. Next spring I plan to try a new angle. Hydrogel beads soaked in “chicken juice” or “turkey broth” or similar, which has had a tiny amount of Fipronil added in. The wet hydrogel seems like a hunk of meat to them supposely… If it’s an established nest and a worker, they’ll pick up a chunk and take it back to the nest to share. I’ll put it out early enough to hopefully attract queens coming out of hibernation though. A dead queen which never had an opportunity to even start a nest, is the best kind of YJ queen!

Speaking of queens, YJs are plentiful enough here (not the entire region, just for some reason right around where we live) that I more or less hunt them. I like to walk through my orchard in the spring and see the trees/bushes coming to life. I carry a small hand held pump sprayer with soapy water and the nozzle set to a concentrated stream. The sound, or the zig-zag flight pattern, of a foraging YJ queen… I’ve got to the point I can detect fairly easily. Quickly hit it with the water, knock it to the ground, put a boot heel on it.

In hopes nobody thinks “this guy is a lunatic”, here’s a “trophy case” of sorts: 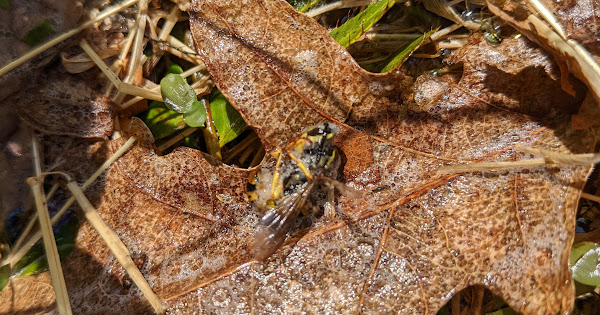 My wife and I kind of make it a competition, she usually just keeps a fly swat handy and gets a fair number of them that way. That linked album has photos of 27 YJ queens we got this spring to early summer and 1 European Hornet.

It’s mid August and the last YJ I saw anywhere around here was probably 3 weeks ago.

I use any cheap sugar product and add a bit of vinegar. I also never rinse the traps so there is some dead wasp mixed in as well. Nearly anything works I have found, the main challenge I have is keeping the traps filled. But recently I used some leftover lemon syrup we had (from a soda machine) and it doesn’t seem to work quite as well.

Does anyone have a good reliable trap (the trap itself, not the bait) or way to build one from common materials? I have bought various versions on Amazon and they are either expensive or don’t last long or both.

By the way I currently have more problems with moths feeding at night than I do with wasps. My trap openings are too small for the moths to get in.

From someone retired from the food and baking industry, I’d say your thoughts are worth listening to!

Fortunately, I never had to cater to the wasp and yellow jacket world! :-)M

Apple juice works fine. Also Coke or some cheap soda. Some vinegar added to discourage honey bees. Last year the yellow jackets were so bad that in addition to the traps I used a 2 ft wide open container with coke and borax. They bring it back to the nest and feed young. It took 2 weeks before the numbers declined and eventually there where almost non. This year I put up the traps early in the beginning of July. Now only see a few yellow jackets. 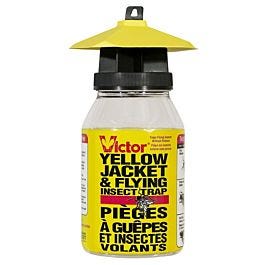 I haven’t had the same success with any sweetened product like soda pop, which is cheaper than apple juice. If soda works, dissolved sugar should also. Maybe add some chemical fruit like ingredient. I guess I should experiment.

I’m using the double wet side dry side trap. Dry side is filling up with bees. I just used a piece of fruit they were already working on as bait. Found they also like bug zappers about an hour before and after sunset. Hornets continue well into the night and also like zappers.