I’ve had my eye on this tree for some time. The leaves are like Bay leaves (but much stronger), the fruit is avocado-like (but much harder to pick at the ideal ripeness, being inedible on either side of this point). But most importantly, I’m after the nuts. They can stimulate like coffee and have similar applications to cacao, and they have a good shelf life when dry. And the tree seems very productive. 3 links that speak of the tree’s use:

NOTE:  Bay nuts must be properly roasted to be edible to humans.  In spite of our best efforts to the contrary, we still commonly encounter people who are not roasting their bay nuts properly.  Mos…

By Steven Edholm NOTE:  Bay nuts must be properly roasted to be edible to humans.  In spite of our best efforts to the contrary, we still commonly encounter people who are not roasting their bay nu…

The tree seems easy enough to find, and I can probably acquire seeds of it without much fuss. Except… I don’t want to. The tree is a known carrier of a nasty Phytophora than can affect, among other things, oaks and avocados. Avocados are a cherished part of the local diet where I live, and I have no intention to put that at risk (never mind the legal ramifications that would probably end up restricting seed trade into the island). And this Phytophora spreads quite readily, and leaves viable spores everywhere (all over the plant, the fallen fruit, the leaf litter, the nuts, etc.). Info on this Phytophora: 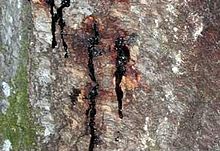 Phytophthora ramorum is the oomycete (a type of Protist) plant pathogen known to cause the disease sudden oak death (SOD). The disease kills oak and other species of trees and has had devastating effects on the oak populations in California and Oregon, as well as being present in Europe. Symptoms include bleeding cankers on the tree's trunk and dieback of the foliage, in many cases leading to the death of the tree. P. ramorum also infects a great number of other plant species, significantly wo...

So I guess my query with this post is as follows: Is there a disease-free source for this tree? Are there any confirmed spore-free populations that can be used as stock for people wanting to grow it in other places without transporting the pathogen? Or perhaps someone can propagate it by tissue culture to produce clean stock? I don’t think this tree is worth spreading the disease, but it is a fairly good tree, and I think it’s worth looking for disease-free stock, if it can be obtained.

I have these growing all around the perimeter of my yard. They smell so good - much stronger than Mediterranean Bay. I can only once recall seeing the fruit hanging on the tree - either I am not paying attention or the critters are aggressive about picking them.

@SkillCult, who wrote the first two articles that you listed, is obviously knowledgeable about California Bay and may be able to speak to the Phytophthora issue.

I did write those first two articles and I also have phytopthera ramorum here on my property. I think the safest way to introduce them is by seed. I would confirm that elsewhere before doing so, and you are right to be concerned. I had a plant pathologist out and he said that once an item dries completely, like wood or bark etc, the phytopthera dies. For instance, it is considered safe to transport dried wood. I also very much doubt that the infection gets into the nut itself. the outside of the nut could be disinfected with lysol or bleach or something. I had the USDA write me to send them seed of bay and tan oak for thier east coast phytopthera project, so they didn’t seem too concerned about infected seed. I really don’t think the seed becomes infected. The tree is a carrier, but doesn’t seem to be much affected by the disease, usually only the leaf tips are affected and never the bark. One of the first places we see infection is underneath bay trees. The leaves of the bay get it and drip the infection down onto plants below.

I think this tree should be explored as a possible cultivated/selected/bred food crop. It is remarkable in it’s fat content, being 50% and even more of the highly stable saturated fats that everyone is after in coconut oil. Mostly lauric acid and most of the remainder I believe is caprylic acid. There is a great potential market as a “superfood”, processed like chocolate etc. I don’t know what the possibilites are for developing the flesh like avocado, but selections could definitely be made to improve nut size, oil content and flavor. The tree shows a very high genetic diversity in nut color, size and shape. There is a guy in Sonoma County that got a large grant to study the tree and look toward developing further production. I’ve been saying for years that some university should take it up and start a program to improve and assess it as a viable commercial crop. I think it would be a long project, but it is very little known now. Many of the people that know about it now have found out about it through the efforts of my ex wife Tamara Wilder and I, especially Tamara who has promoted it tirelessly at events, schools and classes for a long time. A few Native Californian weavers, Especially Julia and Lucy Parker and recently Corine Pierce have been cultural Embassadors of California Indian Culture teaching about native foods. I may very well have found out about them indirectly through Julia Parker. (For anyone interested in acorns, Julia’s book It Will Live Forever is a must read) Somehow bay nuts have been relatively unknown by non natives until recently. Finally some chocolatiers and enterprising individuals are starting to play with them. They have a limited potential though, as long as we are relying on wild stock. Few wild trees produce regularly, and of those, few are annual. I suspect this has to do as much with environment as genetics, but as with other fruits and nuts, it may be possible to select stock with annual tendencies. I could go on and on and write a novel. I was actually starting a book at one point, but I haven’t been able to finish it.

I’ll try to contact another plant pathologist to fully confirm, but I feel much better about the matter now that you’ve chimed in. If all seems safe, I may try to acquire the seeds down the road, provided they come disinfected (and I’ll disinfect when they arrive on my side as well for good measure).

I’d like to acquire seeds of varying stock, for genetic diversity. I’m into plant breeding, and what you said about the tree’s potential resonates with me. When breeding for traits like fruit and nut quality, I think it’d be easier to graft seedlings onto adult trees, to decelop them as branches and shorten time to fruition. That way, you wouldn’t waste years on a tree only to find it was a dud for the trait you were hoping to develop. For something like productivity, on the other hand, I think any such promising branches would have to be grafted and developed as full-sized trees to assess how productive it is annually.

I think you should finish the book, if you’re able. Perhaps that’s the inspiration and incentive an Ag University needs to take on the challenge of developing this tree for commercial use. And as for the acorns, I’d like to find a southern variety of oak that produces worthwhile sweet acorns for human consumption. I haven’t done enough research on the subject, but the closest thing I have in mind so far is the cork oak. I keep wondering if there’s better types for quality and production, though.

I’ve got a large Umbellularia californica in my back yard, and would be happy to share seeds in the fall if this is still an interest of yours. I tried roasting them both of the last two years and while it wasn’t terrible it just wasn’t good enough for me to justify the labor involved. This year I decided to try something different and I’m pickling the flower buds a la capers: 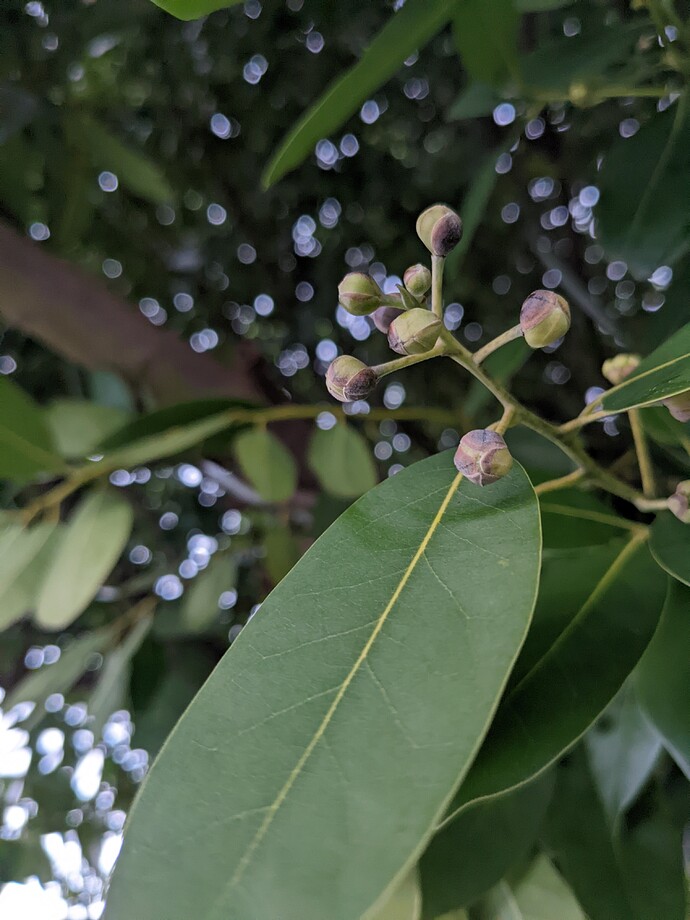 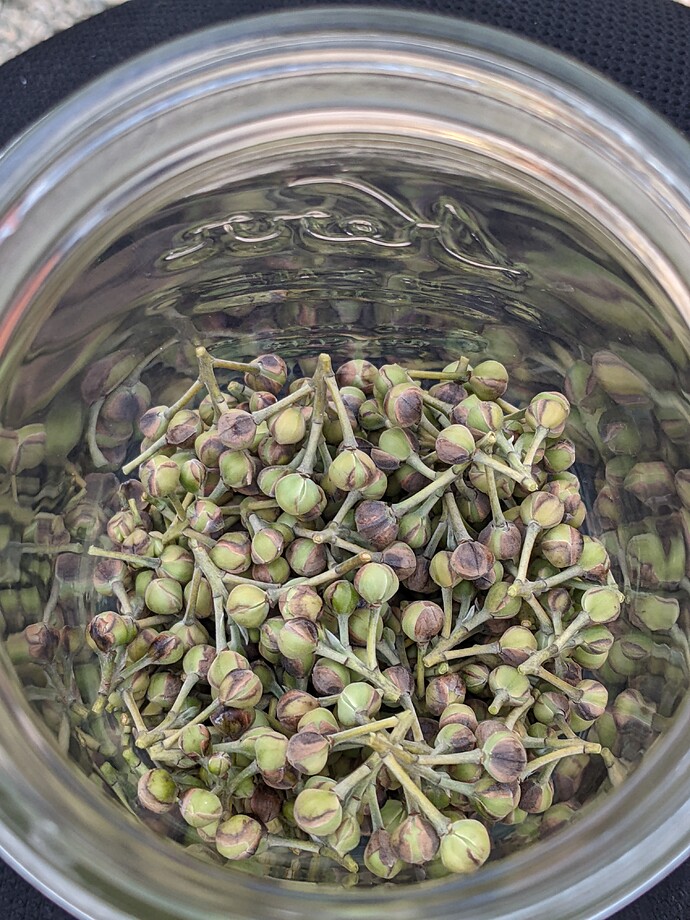 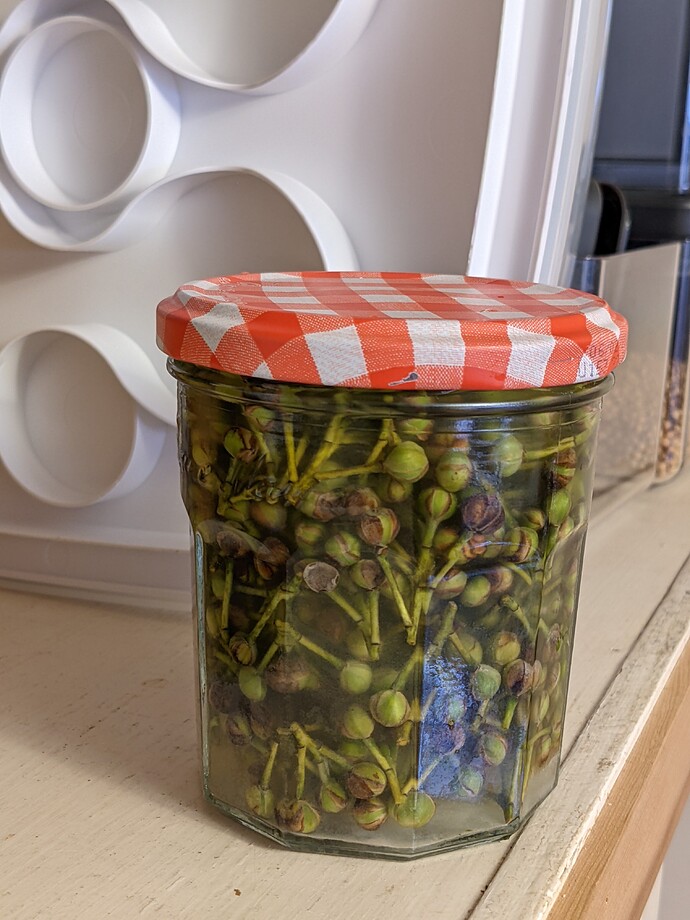 How did those baynut capers turn out?

How did those baynut capers turn out?

They are still very tough. They taste great, but they seem like they need to be cooked more or something.

I have attempted to graft Mexican avocados (drymifolia) to my tree a few times, no success yet. This one is still alive after a few weeks, but no sign of callus bulging or anything: 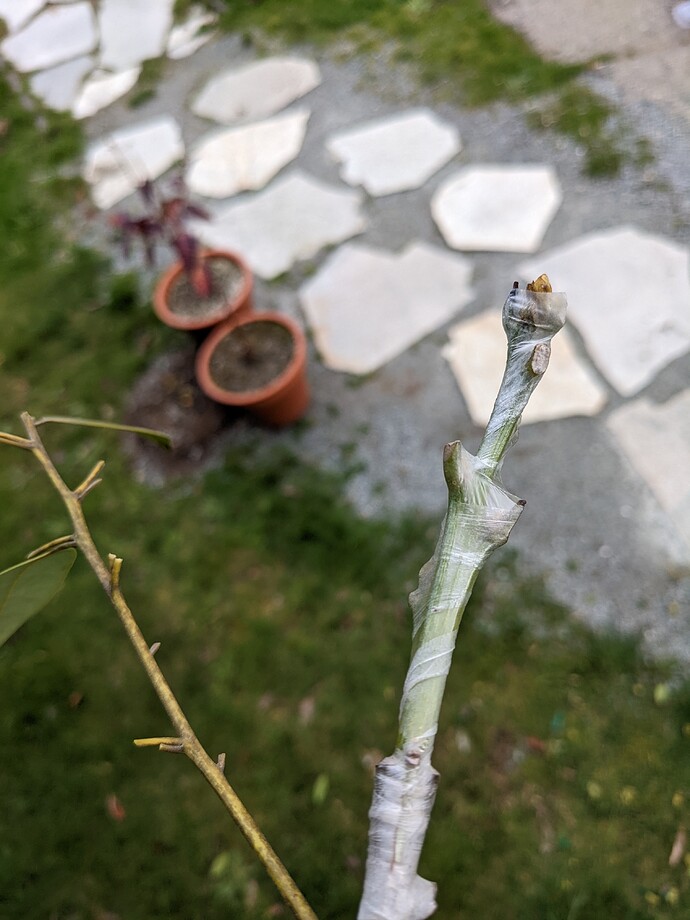 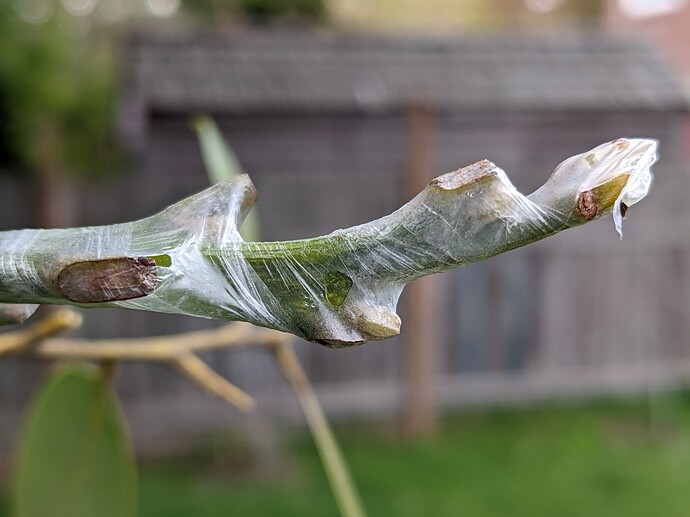 I did notice that the bay laurel flowers at the same time as my greenhouse avocado trees, so it shouldn’t be challenging to have fresh pollen to try breeding, but I doubt they are capable of hybridizing since avocados are grown commercially throughout most of the California bay laurel’s native range, so it seems like chance hybrids would have happened by now if it was possible. Though maybe with embryo rescue or something similar!

The fact that grafts don’t take readily between them bodes ill for hybrids, but I still think it’s worth a shot. There’s a better chance of forcing the hybrid with mentor pollination, sterilizing the pollen of the female parent and mixing it with the pollen of the intended male parent. Maybe by freezing it? Some people recommend microwaving it, but I haven’t found instructions to avoid overcooking and denaturing it.

I am reminded of how readily various chestnut species will hybridize, yet even so there are many issues with graft incompatibilities. I wouldn’t consider intergraftability to directly correspond with interbreedability.

Just realized my first post only showed flower buds, here are some photos around mid-harvest last year showing what the fruit coloration is like, and that’s the tree in the background outside the window in the second photo: 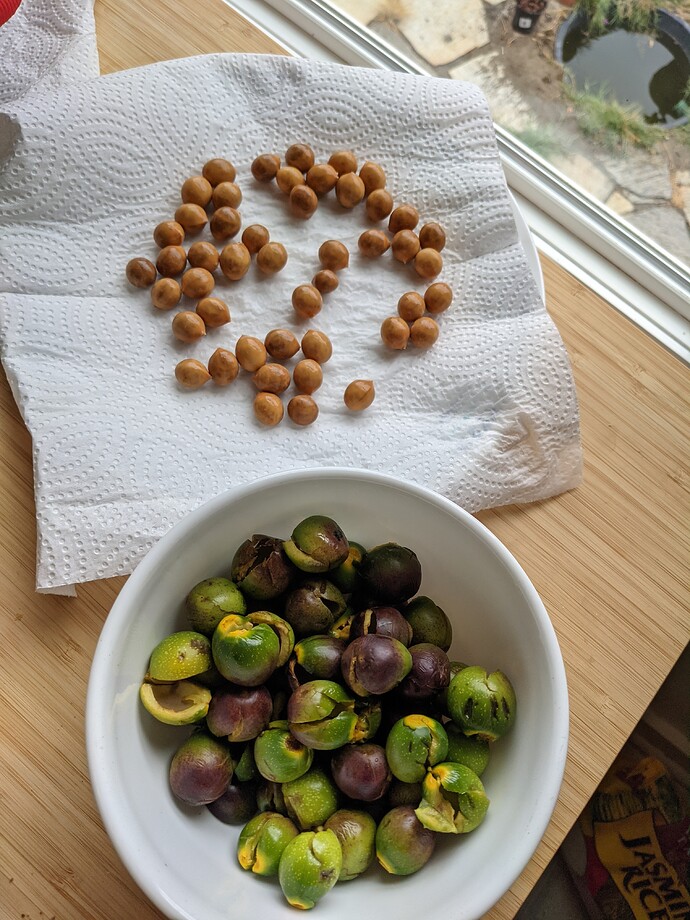 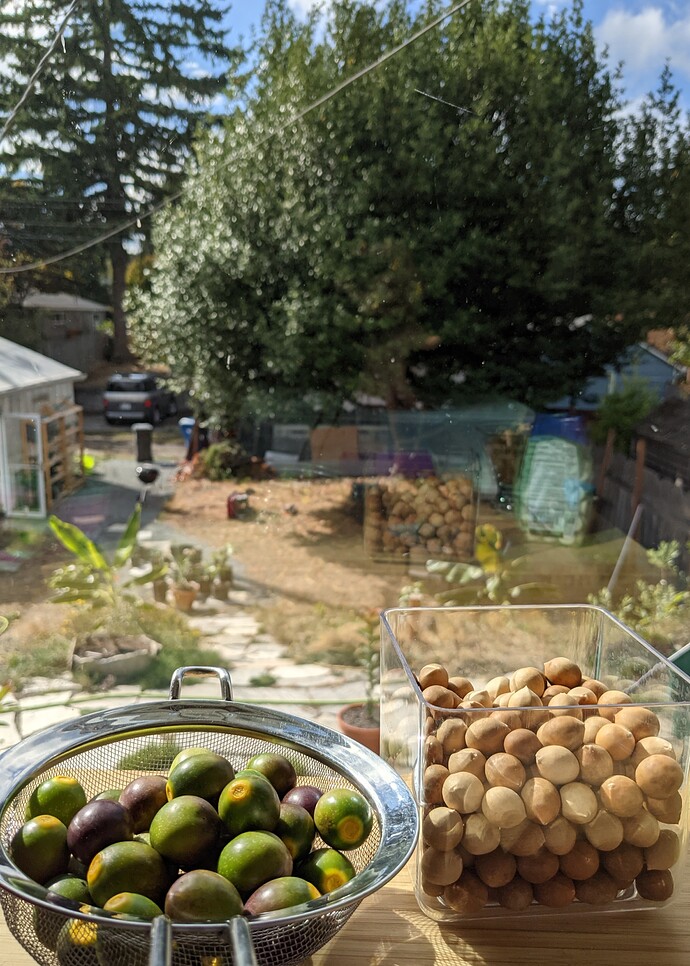 Have you tried the fruit? It’s nearly impossible to get it at peak ripeness… from unripe to inedibly spiced in a day or so.

And have you cooked with the leaves?

Have you tried the fruit? It’s nearly impossible to get it at peak ripeness… from unripe to inedibly spiced in a day or so.

I’m not sure that it’s ever really very good for fresh eating. The indigenous people who lived in its range mostly scraped the inner layer and used it to make “cakes” or flatbreads of some sort. Even at peak ripeness it’s got too much “flavor” for my liking, but I could see cooking with it if you have the right recipe.

I can see how the nuts would be a good chocolate substitute, but I wouldn’t recommend grinding them in a coffee grinder. They broke mine! Too thick and pasty, they clogged it up. I ground some by hand in a mortar and pestle and made a “hot chocolate” drink with cream and sugar that tasted ok. I didn’t notice any stimulant effect, but maybe a slight laxative one.

And have you cooked with the leaves?

Yes! They work great to add flavor to soups, beans, and sauces. Much more flavorful than the Mediterranean bay leaves usually sold for that purpose.

Could you see the roasted nuts eaten out of hand (maybe salted or sugared), or just as an ingredient?

The leaves sound like a superior substitute, a little would go a longer way.

Maybe sugar or honey roasted, or made into candied brittle, but they are too bitter for my taste to eat out of hand unsweetened. I’ve heard they work well as an ingredient in baked goods, but didn’t try that.