Have a hive of bees underground in my sprinkler control housing. They have been there for 10 years or so. Initially I freaked out as they came out of nowhere and at first would chase the kids. Eventually after they established they mellowed out. Now with 200 plus apple trees they have been a major blessing. My conundrum is they are in a horrible place. If I ever have an issue with the sprinkler system getting access to it will be a major issue. My question is if I buy a hive can I lure them out and get them in an area where I can still keep them unharmed and also harvest the honey? Thanks in advance if you can help!

My guess is they are africanized bees or german blacks depending on your location but i could be wrong. Some are nicer than others. When they requeened you likely got a better tempered queen. You can remove them and put them in a beehive if you want. Make sure the queen is in the hive. Cut the combs out and rubberband them to the frames in the hive. 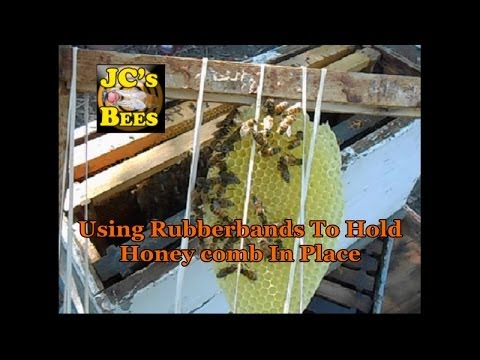 I’ll presume you have very little knowledge of beekeeping. Do you know a beekeeper nearby? or could you find a beekeeper to assist? If you would like to talk to an experienced beekeeper, please feel free to contact me via the phone numbers on my website selectedplants.com

It is relatively easy to move bees from most enclosed areas into a hive… so long as you can access the area where they built their broodnest. If the bees can’t be accessed, it is usually possible to build a cone escape and trap them out of their location into a hive. You would need a hive, some basic tools, and a few other things to get the job done.

Thank you so much guys for the information. No we have no experience but are researching as much as we can. Unfortunately the local bee keeping groups have either not responded or have been downright rude in assisting. I would love to maybe pick your brain when time permits to proceed with learning to relocating these safely.

A bee vacuum is a helpful peace of equipment for removing swarms safely. 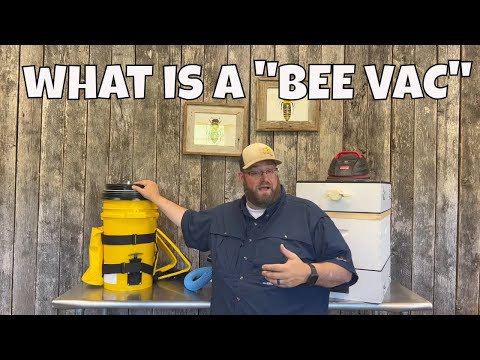 Backyard beekeeper here. First question, are you sure they are honeybees? Generally honeybees don’t build hives underground unless there is nothing else around. I’m not sure where you are, but in my area (Pennsylvania) I would expect paper wasps to be in something like that, not honeybees. But it could happen!

Assuming it is honeybees, you could remove the colony and put it into a normal hive. However, it’s not something I would recommend to a beginner. You will have to extricate the existing combs of brood/honey and put them into standard frames while doing as little damage as possible. The queen will also need to be found and moved. If enough brood and the queen is moved, the rest should follow. This should be done in spring when nectar is available, doing it now will probably result in colony death.

@ampersand
I agree that honeybees don’t typically have their home/hive underground. First thing I suggest doing is to confirm what type of bee or wasp etc that you’re dealing with. You could get a quick answer by posting a picture.

I would add Africanized bees are a bit more likely to, but I don’t think they would be alive in zone 7.

First question, are you sure they are honeybees? Generally honeybees don’t build hives underground unless there is nothing else around.

Yeah, this sound more like yellow jackets. Even if it was indeed honeybees (unlikely) it would be a varsity level event for a beekeeper; you would have to dig out the hive and search for the queen until you are certain that you got her, and then place that queen in an empty beehive with a queen separator to trap her there (queen is bigger, she can’t get through the separator but the workers can). Her pheromones would drive the workers to migrate to the new hive.

But, unlikely that these a are honeybees and you are better off getting a young productive queen. If you want bees just order them, they come in the mail.

Honeybees in large parts of Arizona, southern California, and other high desert locations often build their colonies underground. Also, no wasps or hornets have nests that persist for 10 years. It still makes sense to verify, but these are most likely honeybees. I read an article a LOT of years ago that showed between 3 and 20 colonies of UNDERGROUND honeybees per square mile in parts of Arizona. Why underground? That is the only place they could find a cavity to protect their nest. There are not many trees, especially trees large enough for a honeybee colony, in the region. The usual places they build are in water meters, sprinkler systems, abandoned tanks, etc. I removed a colony from an abandoned hot water tank once. Bees don’t care, they just want a large enough cavity that is dry.

You could either dig them up in the spring, or try and lure them in a swarm trap when they swarm. In the spring, set a swarm trap nearby with some comb and lemongrass oil in it, and if they swarm they should go in it. Some will stay behind in the original hive, but you will get the old queen and a lot of the bees. The original hive will make a new queen and bounce back.

Also, no wasps or hornets have nests that persist for 10 years.

In most parts of the US that’s certainly true… Workers die when it gets cold, only new queens hibernate until the next season and start out building a brand new nest.

I’ve read though that in places where it doesn’t get cold enough in the winter, they persist and the colony ends up having multiple queens and many times more workers. 100k+ even. (yellow jackets that is, don’t know about other wasps)

Doubtful that would be the case if you’re in Zone 7 though @highdesertheritage Although a picture of one of these “bees” would be helpful in positively identifying what they are.

Mites dont kill africanized bees and like any nuisance tree or weed they adapt quickly. These will be what honeybees are in a few years in warmer states. Over time they will continue to cross with cold hardy bees until they can progress further and further north. At least that is one scenario there are other possibilities. If you live in Arizona or other warmer states you know more about africanized bees than me already. 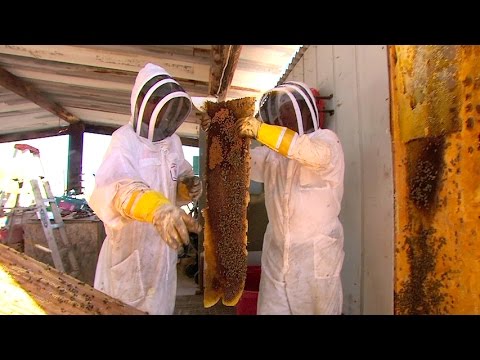 See this link and image https://www.researchgate.net/figure/The-zones-of-tension-between-Africanized-honey-bee-and-European-honey-bees-based-on-10_fig4_268182089 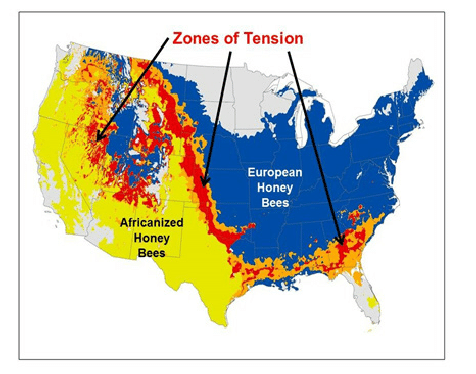 “Africanized honey bees are not selective of nesting sites — they will quickly inhabit empty spaces, holes or cavities. European honey bees are more selective and prefer drier sites 3 or 4 feet above ground.”

They are making their way through many states like arkansas Africanized Honey Bees in Arkansas | What's the difference between Africanized and regular honey bees?

If they can live in Kansas it is a matter of time until they adapt to further northern states. They are 60 miles from the border. Which means they crossed the border many times. Africanized Bees | Current Topics | Extension | Entomology | Kansas State University

Noone seems concerned but its still good to be cautious. It is something to consider as people catch swarms it might be best to throw on the bee suite just in case. https://fox4kc.com/news/doing-yard-work-man-dies-when-hes-stung-1000-times-by-bees/ 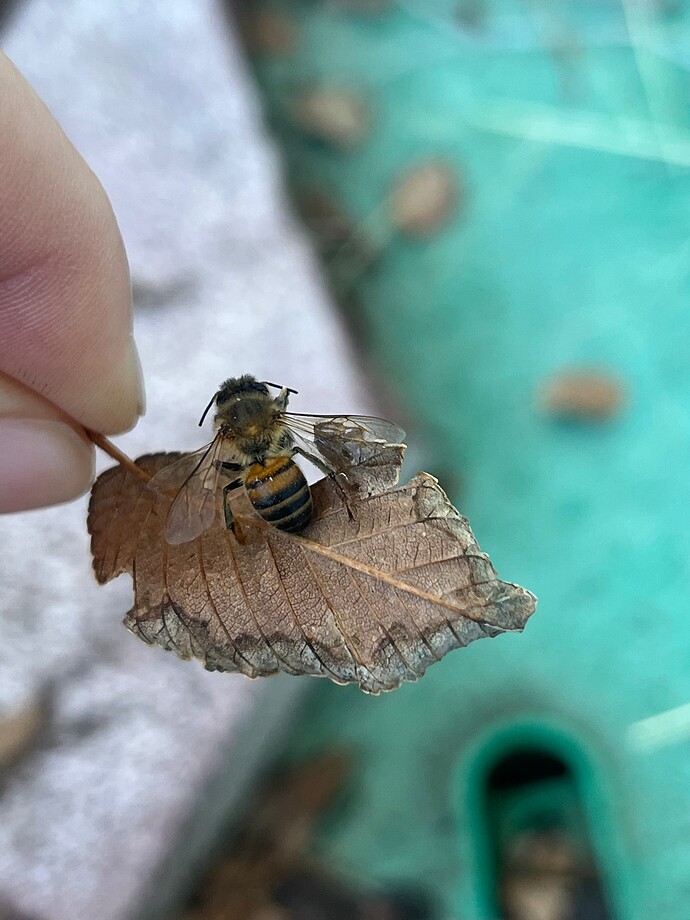 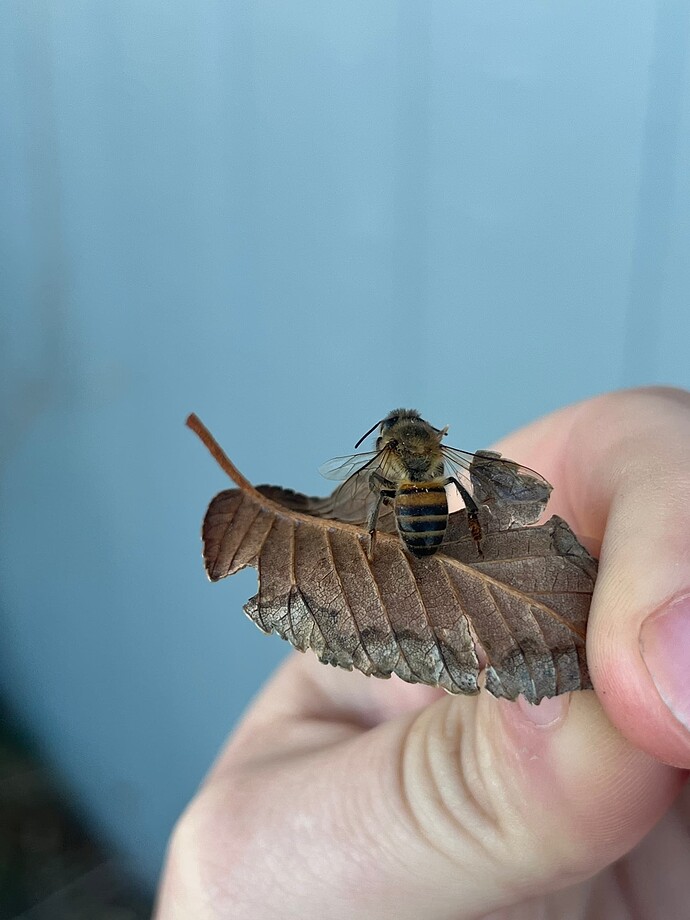 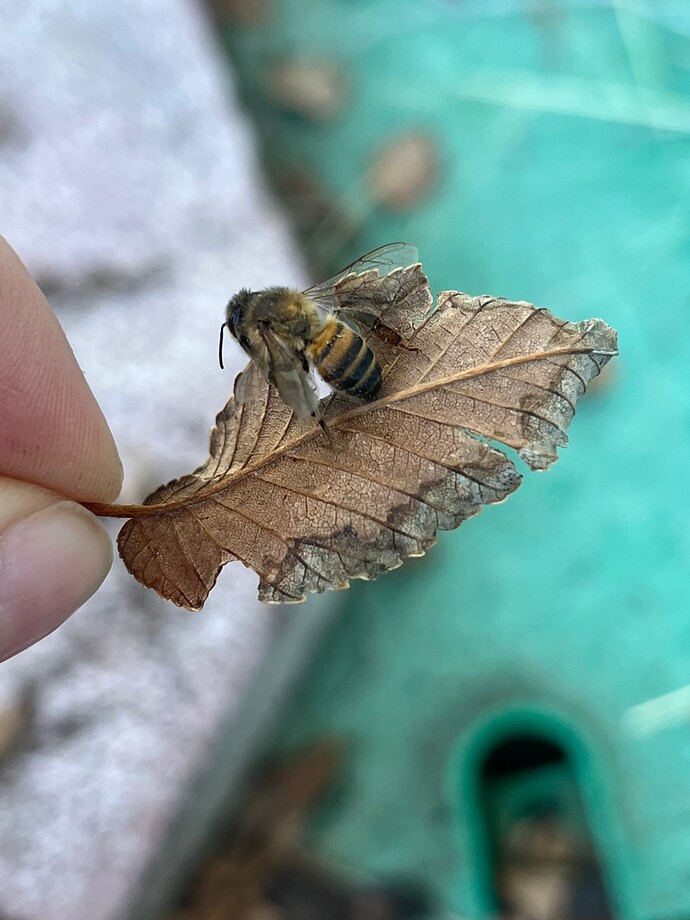 Here’s some pictures. From what I’m hearing they are Africanized or a hybrid. That’s all there is here now.

That’s certainly looks like a honeybee and not some kind of wasp (hornet, yellowjacket, etc).

In my neck of the woods we probably only have European honeybees… They either live in man-made hives, or in a hollow in a tree or similar. Never seen or heard of one nesting in the ground… But perhaps that’s a difference with the African ones, they may be more inclined to do so.

Similar for yellowjackets, I’ve had them build nests hanging from utility wires, tree limbs, etc… 90% of them around here nest in the ground, but occasionally they’ll build above ground. I believe that is a trait of one of the varieties here (Common/Eastern/German yellowjacket). Have had people argue with me more than once that “that’s not a yellowjacket, they nest in the ground”. Which is indeed true, but only most of the time

ok, that is definitely a honeybee. Also, it very much looks to be Africanized. Small body size combined with the veins in the visible wing are consistent with the Africanized bees I’ve seen at the USDA lab and in colonies when I visited Mexico in 2015.

Can you take a picture of the hole(s) they are using as an entrance? That will help with recommendations of ways to get them out of the sprinkler box.

A hive for honeybees typically costs about $200. Alternatively, you can build one using a table saw for about $70 but will have to purchase some supplies like wax foundation and frames. Either way, you will wind up spending about $200 by the time you purchase a smoker, hive tool, and the hive. A bee suit will set you back at least $100 for a good one.

This is an example of a single brood chamber hive. You will need 2 brood boxes to do the job right. 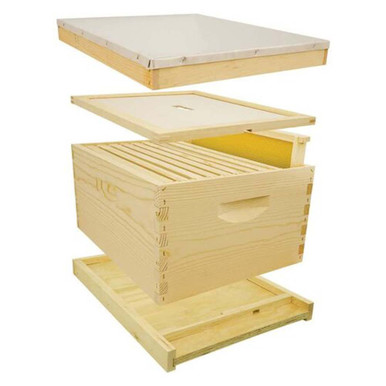 In addition to the above, look at the prices of hive tools, smokers, and bee suits. Mann Lake is one of many beekeeping suppliers.

That is what i suspected they could be because of where you found them “underground”. European Honeybees dont do that usually but africans or hybrids do. They can be dangerous it is best to leave african bees to the professionals as it sounds like your aware. That is why that first bunch was so nasty. They call them killers because they can be. You gave it away when you said “Initially I freaked out as they came out of nowhere and at first would chase the kids.” And that they were underground in the sprinkler system housing. Many beekeepers catch them and hive them never realizing what they are then overtime they requeen them. Those guys are setup for whatever bees come their way. You dont want your first hive to be them.

If interested in connecting with beekeepers, here is one forum Bee Forum | Beesource Beekeeping Forums