Okay, I’ll can or freeze some.

My initial impression is that it doesn’t taste as good as the juice from the masticating juicer after its been allowed to settle.

Thanks; frozen would be fine unless your are canning a batch.

Interesting about the masticating comment; I have found that the masticater, for certain fruits, grinds up rind and perhaps seeds and can impart a “green” or “off” flavor, so I often allow it to settle for multiple days in the fridge and then pour very carefully to avoid any sediment.

You gave as quantities 6.5 pound input fruit and 1/2 gallon of oupput juice (this would weigh about 4 pounds). I wonder what the weight of the discards was? (this would reveal the amount of added water to the juice)

This is my first year of growing raspberries. I planted this one labelled as “Fall Gold” from Indiana Berry. The color looks yellow when they start to ripen but end up being close to pink when ready to harvest. I also have Double Gold which is indeed pink. However the plants have different growth characteristics, Double Gold being upright and long and Fall Gold being more bushy and short. Do I have the right cultivar? 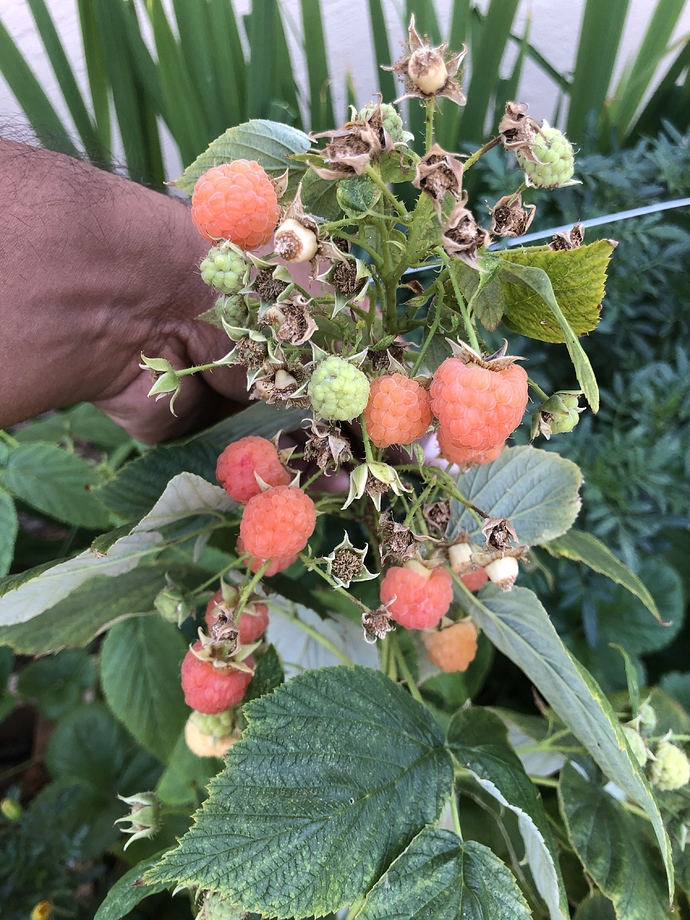 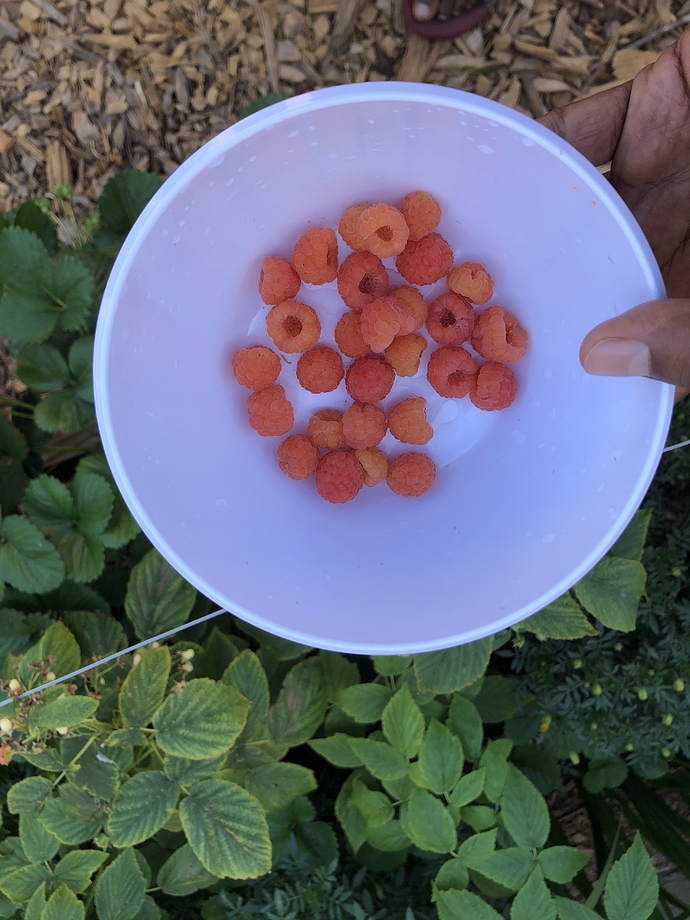 After uploading, it looks more yellow in the pics here

(weird morning light). Looking at some pics online, it is indeed very similar to this one

But nowhere close to these yellows

I’m just starting to get the kiwi ripening. Looks like our total haul will be under 5 pounds but they are delicious!
They’ve taken heavy bunny damage the past couple of winters so only 3 females are producing. I have some ideas about how to protect that I’ll try this year. 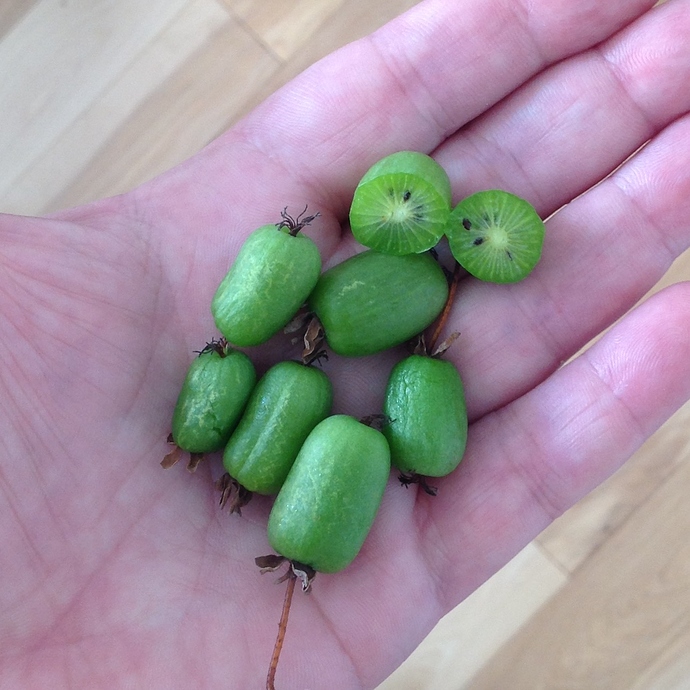 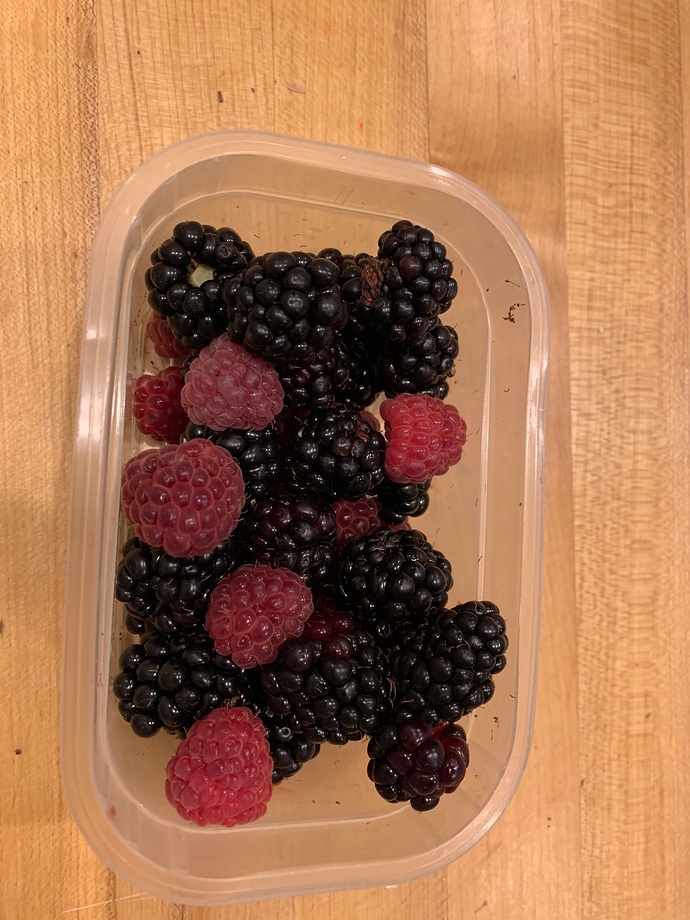 Have you already had a frost or two?

which do you like better fall gold or double gold raspberries? thanks for sharing!

No frost yet…we usually get the first frost by the end of October though. It usually take a hard freeze (<30F) to totally stop the production.

Double golds are sweeter and more productive for me, but I just planted them this spring. I need to see next year if I can fruit them reliably in my low chill area. Other berry growers here can help with more reliable info

Also, I had Josephine and BP1 from @Girly’s yard and they were sweeter than any of the varieties I grow.

It got to 34 here on the 13th, and that’s here up the hill. Down the hill it must’ve been colder because the PA Freedom and Traveler plants that had little berries on them have all but shriveled up since then. My rasps have a few berries on them, but not many left there either, so our berry season might be over this year.

Pity, I was getting big, fat PAF berries before that frost. My canes on that variety have become monsters this year, compared with the other UA varieties, not a lot of new Osage or Ouachita canes. Triple Crown also pumped out lots of canes, too. Should be a very good blackberry season next year, depending on the winter, of course.

There goes the theory that a frost zapped the SWD in your area. I wonder what happened?

I used to have SWD bad enough that I stopped growing Fall bearing raspberries, but over the last two years, I have not had enough SWD to be an issue. I planted Josephine red raspberries this last Spring and they have been unaffected. I wonder if my local ecosystem balanced out the SWD now?

It just seems too good to be true, almost has to be a fluke. Even with predators eating SWD there should be some pressure. I haven’t planted raspberries yet at my current house because of SWD. With all the berries and autumn olives growing wild in the area, I don’t see how we don’t get it. I’ll have to make it a point to check the neighbor’s wild blackberries around the 2nd week of August next year. That’s when there should be too many SWD to bother picking.

I’m in a similar situation. The property I live on has a ton of wild, berry producing plants. Autumn olive, asian bush honeysuckle, elderberry, blackberry, black raspberry, black cherry, pokeweed, buckthorn, etc. The black rasps don’t get infected much since they are early but everything else does.

I first noticed the SWD this year in my red raspberries on July 9th and their population took off pretty quickly from there. Only the earliest rasps have a chance to avoid them. There are so many that spraying is pretty pointless. I tried spraying with spinosad, making vinegar traps, and thinning canes, but none of that had much of an effect on their numbers. By late summer, I was lucky to find 5% of my raspberry crop uninfected.

The only thing that worked were organza bags. They are a bit annoying to use on rasps because they sometimes get caught on the thorns and make picking much more times consuming since you have to take them off and put back on for each bunch of berries, but at least I get to harvest some of the berries that way.

When we were young, we ate mulberries off the tree and loved it. After someone noticed all the larvae on them most of that stopped. We did discover that submersing the berries in water caused the larvae to separate and float to the top, allowing them to be discarded. I am sure the eggs were still there, but there seemed to be no ill affect on the fruit when processed. This was a long time ago.

I was looking through this old thread thinking about spring and saw your picture of currants. Is that a variegated variety? I’ve never seen a variegated currant.

Larry, I don’t know if I read the part of your post about measuring the dilution.

With a steam juicer, the discards are full of condensed steam.

An easy way to discern dilution is to measure the brix, with a refractometer, of the finished juice compared to squeezing a berry. Measuring takes a few seconds. Cleaning it and drying it is the hardest part, that and sometimes getting a drop of juice without making a mess.