I’ve been looking into getting some fertilizer for my Blueberry (I have a Sunshine Blue) and just general food for some of my in ground plants and as I live in a non-US country will have to import something in. I’ve read here and on the forum that many people here came from that ammonium sulfate is great for blueberries, and there is a local nursery that sells some but it is a bit steep at around $12 for 4 pounds. Based on the online options, and factoring in shipping and import fees, I’m seeing that I could either get 25 pounds for around $60 bucks, or 51 pounds for around $107 bucks. If I get the 25 pounds instead of the 4 pounds I’ll be saving about $0.60 per pound, and with the 51 pounds I’d save $0.90 per pound. Which one sounds like the best option considering the rate at which it’s used and so on? I think from what I remember you don’t need too much of it per plant, so I’m assuming if I get the cheaper one it’ll last me a good while. Another choice would be about 35 pounds for $20 cheaper than the 51 pounds. Any advice appreciated.

One blueberry plant? 25 lbs will last a long time. I guess its a question of how much you will use for just general food. Bear in mind that it is acidic.

Look at lawn fertilizers, some types are made from ammonium sulfate. That’s what I use.

ammonium sulfate. That’s what I use.

Yeah me too, and it’s cheap! Although I would like to move to just organics, I just have massive amounts right now. Cottonseed meal is a great organic substitute.

For me water soluble N fertilizer is no bargain, no matter how cheap. My BB really turned a corner when I started using water insoluble N fertilizer. I can keep them in full sun now without burning to a crisp and the vigor of the plants and fruit yields/flavor/texture are much improved. BB (like most plants) really thrive on N from decaying organic matter. I’ve been using Dr Earth acid lover blend for a few years now and have never looked back.

Speaking of blueberries Bamboo Rabbit said high, come join his forum!
I feel you can hurt your blueberries with soluble nitrogen, although if you are an experienced grower you can grow massive bushes uses it if done right. I too would rather use organic. Any of them are good. I still think it’s a bargain though, the soluble stuff. Organics are way crazy expensive. Why i suggested Cottonseed meal as you usually can get that at a decent price around here. It also acidifies soil too. Dr Earth btw it does have some soluble fertilizer, like Mined Potassium Sulfate. It is way too expensive for my pocket. A one year supply costs the same as a 10 year supply of Ammonium sulfate. Holly-Tone is a lot cheaper. I use that.

The N in Dr Earth is all water insoluble. Says so on the label. We all have our price thresholds, I suppose. Personally I’m not looking for bargains, just what works best. It isn’t exactly throwing money away if you’re eating more and better berries.

@BahamaDan, you’re going to need more than one BB plant for better pollination.

I would need about $250.00 worth. I have a lot of plants so The Espoma products, cottonseed meal, alfalfa, coffee grounds, leaves, straw is what I use. Dr Earth is an excellent product, i will look for it on sale and such. I’m going to try straw bale gardening next year as I snagged straw used for Halloween decorations out of the trash. I got 5 of them! I will use them like pots, then use the straw to cover the strawberries next winter. Then whatever is left in the spring becomes mulch. Oh kinda ironic but the best way to season the bales is to poor ton’s of ammonium sulfate on them, works amazingly well. It jumps starts the decay process. Straw on crack! You have to season before you plant into them, and AS accelerates the process.

Wills did really invite you over

He has a blueberry board, and a figs forum. Nice place too!

If you have a Ag or Feed store near you, that is likely the cheapest place to find Ammonium Sulphate. I make the trip to the one near me once a year. IIRC it was about 50 cents a pound in 50# bags.

A little Ammonium Sulfate goes a long way. I use about 5 pounds of Ammonium Sulfate per 1000 square feet (3X330 foot row). If growth is sluggish, the plants get 2 applications. 100 plants to a row, so each plant gets about 1/10 pound

Yes the stuff is awesome for slow growth of just about any plant. I want to move away from it, although I will probably always have some on hand. The more tools you have the better. Also if the straw bales work well I can get free bales every year and I would need it to condition. Waiting for organics to season the straw will take too long. 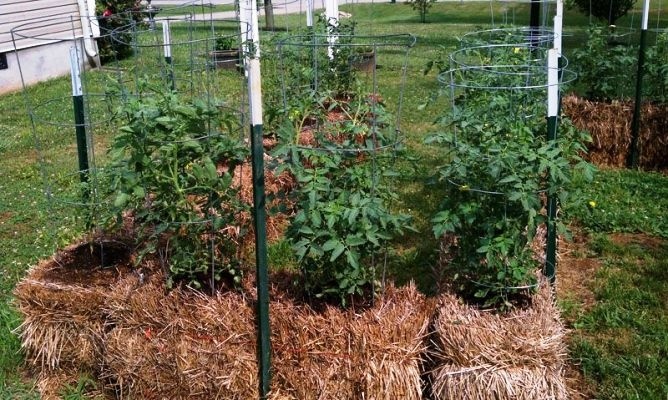 They look great! How long does it take for the straw to break down?

Have you ever tied any Calcium Nitrate on your Tomato?

Its fast acting nitrogen plus calcium. Works great on my acid soils including fruit tree (not Blueberry!)

They look great! How long does it take for the straw to break down?

Those are photos from the web, I have not tried it yet. It takes about 2-4 weeks to season the bale before you can plant into it. So I have to start early to season bale. It’s almost like growing hydroponically. I will have to supply nutrients for awhile, the bales do start feeding the plants eventually. The bales last a season i am told. By the end of the growing year they are breaking down. You leave the twine on the bales to help keep them together. In fall I will use what is left to cover strawberries.

Have you ever tied any Calcium Nitrate on your Tomato?

Yes, very good stuff with tomatoes. It’s hard to go organic as IMHO nothing works as well as calcium nitrate. I have had a lot less, almost no BER using CN. Here BER occurs because nightly temps are low and the plants become stressed. Or stressed for other reasons like too much rain. Calcium nitrate does help a lot. I should probably use Calcium nitrate to season for bales I plan to put tomatoes in. You can grow anything you want in the bales. If you add some soil to the top you can even germinate seeds in them.

We have basic soils here, so I only use Calcium Nitrate on tomatoes.

I use calcium nitrate on tomatoes (and other plants) as a foliar spray. 2 teas per gallon plus whatever else (I generally add some phos and potas).

I recently bought a 20 lb bag of HJ brand ammonium sulfate at Walmart for around $10. The particle size was pellet size, not that fine so to use it I put a couple of tbsp in 2 1/2 gal watering can and it takes about an hour to dissolve. Before this I had the Lily Miller brand, same size bag, the price was somewhere around $13-15 as I recall, and the product was a fine grind so it would dissolve in 5-10 minutes.

Had no idea I could buy Ammonium Sulfate at Wallmart!

You know how Walmart is, at least the one I go to. They don’t always have what you want in stock. But they seem to be moving into springtime already, their Burpee seed displays are up, so this will hopefully be the time to find the Ammonium Sulfate. I see they have the Lily Miller version on their website for $9.49 but the shipping is $20. I hope this means they’ve changed the brand they carry in store, the Lily Miller is much easier to use since it is a finer grind and dissolves faster.