This year I decided to forgo my usual surround and go with a more aggressive spraying program. I have been spraying Imidan + Indar + sticker every 2 weeks or sometimes more often. I think I’ve sprayed 3 times so far. I also have some streptomycin spray I have used sparingly and Sevin spray for some focused aphid tx. It almost seems like the more I do, the more problems I have. Maybe it’s just that I’m looking more closely for them.

I walk through the orchard once or twice a day to look things over, check grafts, etc. The problems I’ve seen are under control because I’ve been pretty aggressive and I’m OCD about checking them, but I’m still surprised at what I’m seeing. 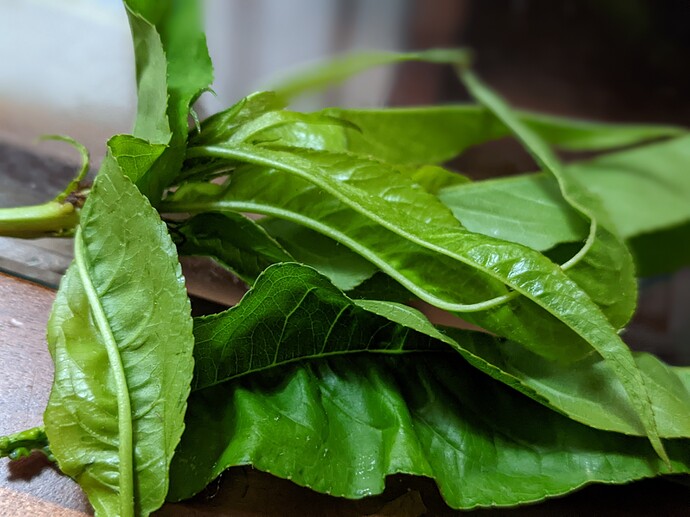 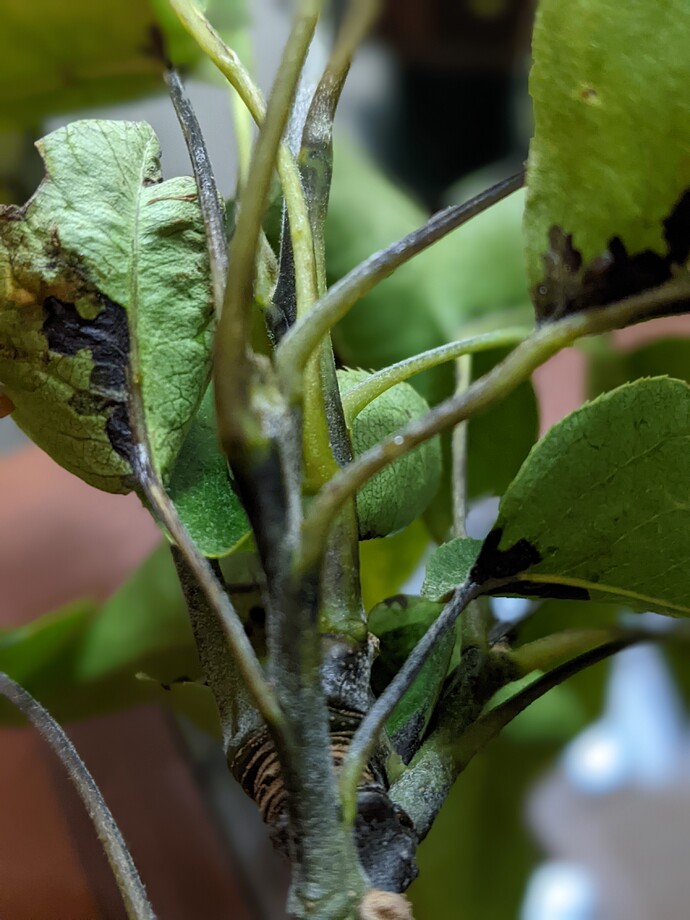 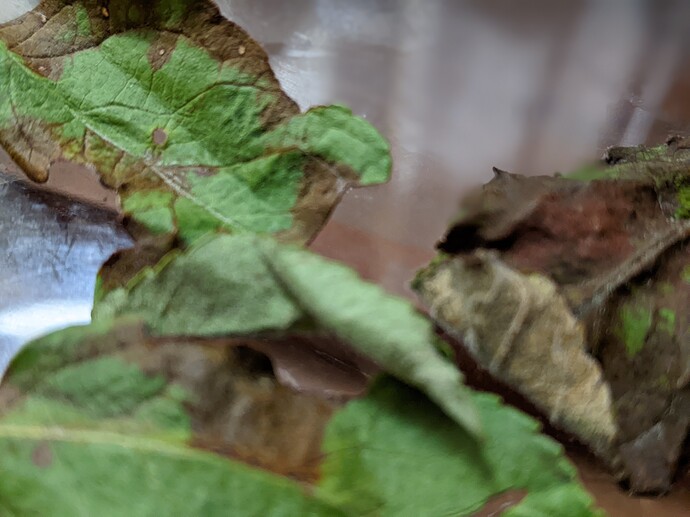 Aphids. I also had pear blister mites but I don’t have a pic of that. 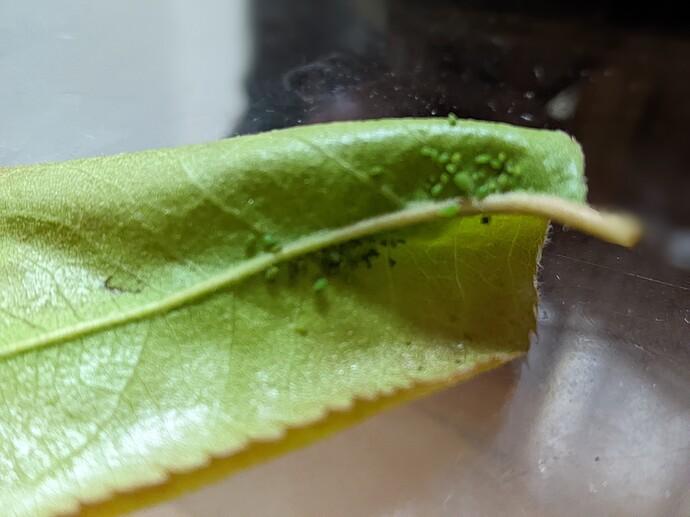 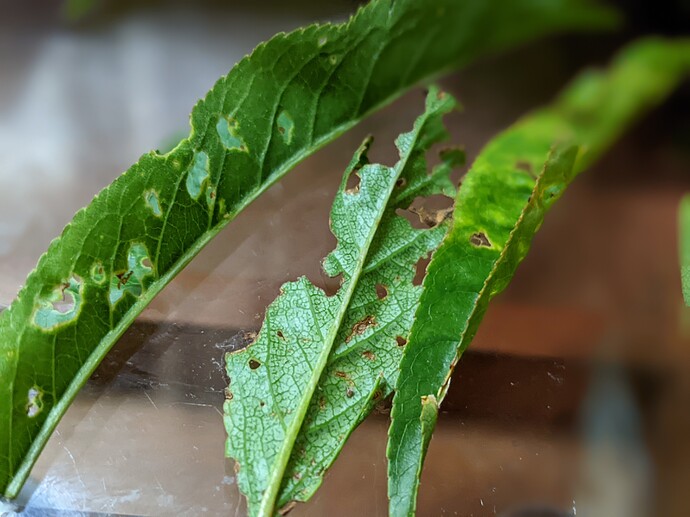 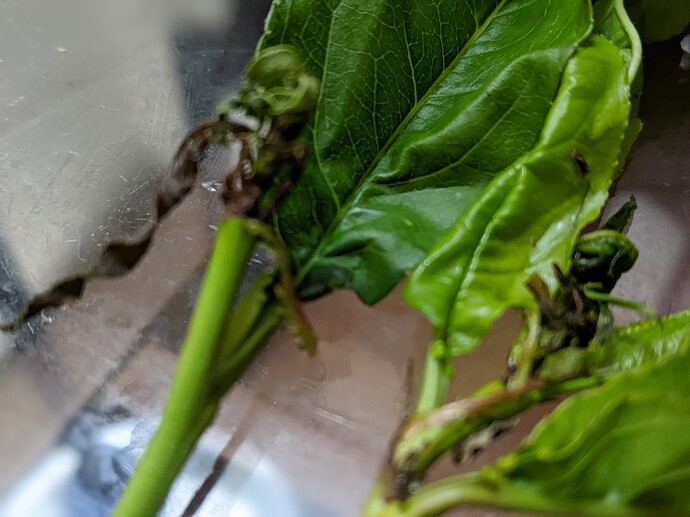 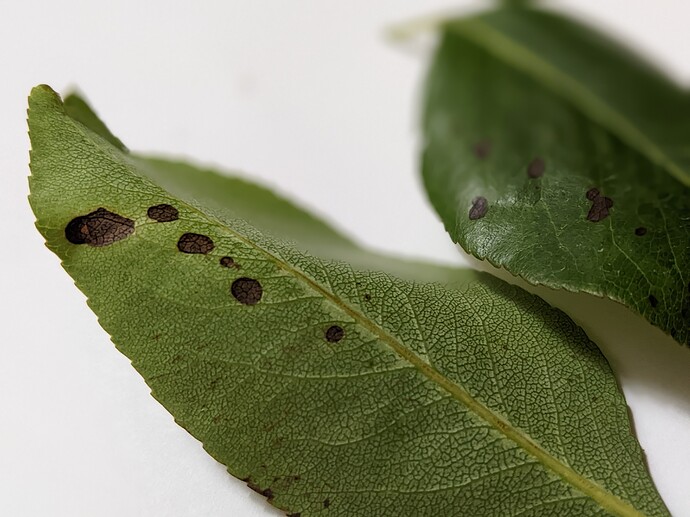 Cedar apple rust? No, trick question. It was male seeds from my dawn redwood tree that had fallen on a leaf.

CAR was my gut reaction though. 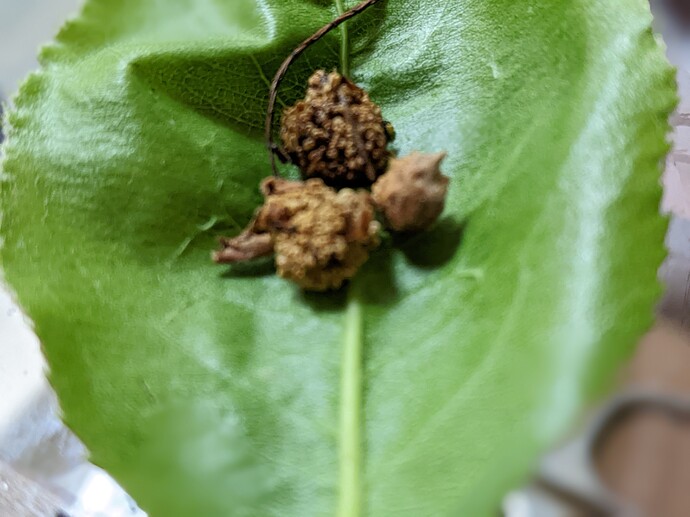 Lots of stuff. Are others seeing the same? I’m a pretty thorough sprayer. Not sure where I’m going astray. Ideas?

I bought dormant oil in Feb…then found the bottle from last year.
Never actually used either!

Crop is light…young trees I hand pollinated have a few. So far, just a half dozen apple grafts dying after having put on an inch or so of growth, but I doubt spraying would have made a difference. Not sure I have 100 anymore…out of 121 apple grafts…but the pears are still coming to life after over 45 days in some cases.

So, only thing I’ve sprayed so far is a deer repellent.

(Squirrels? Digging my chestnut and pawpaw seeds up…
you have a spray recommendation for bushy tailed rats?)

(Squirrels? Digging my chestnut and pawpaw seeds up…
you have a spray recommendation for bushy tailed rats?)

Yes, but you need to apply it with a pellet rifle. Works great.

About a week ago, I found some some fire blight like that—infecting leaf and fruit petioles and tender new growth----on one of my Asian pears (Meigetsu). Turned out there was a small, easy-to-miss blight canker on one of the scaffolds. On hot days it was weeping bacterial exudate, which was running down the scaffold to drip on and infect these vulnerable tissues. I found it because the ooze left a clear trail in the Surround I have on the tree. I removed the infected green tissues, cut the infected branch back to an “ugly stub” and sprayed the general area with streptomycin. So far, so good . . . .

I’ve been trying out Bonide Repels-All to keep squirrels from digging up seedlings and new plantings. I think it’s working. I’ve had almost no cells in my plug trays dug up this year, which I usually have a lot of intrusions in. Also, fresh transplants and potted trees haven’t had any trouble where I’ve put it down. I did not do a control group, though.

Regina,
I’d like to give it a try to help figure out what has happened to your fruit trees.

You have used quite powerful synthetic spray. However, I do not know when you sprayed. When to spray is as important as what to spray.

In your first pic, I don’t see the classic disfigured leaves from peach leaf curl disease. Generally speaking, spray for peach leaf curl is done when peach trees are fully dormant. I use Kocide 3000 copper.

When did you sprayed against fire blight with streptomycin? Imidan or Indar is not for fire blight. Also, if your apple varieties are fire blight prone, you may want to consider removing those varieties.

For Apple and Pear scab, Indar should work. I usually spray twice at petal fall and 10-14 days later with myclobutanil which is the same fungicide group as Indar.

I am not sure what those black spots on your leaves are. They don’t look like pear leaf spot or pear scab. Do you think it could be chemical burn?

Green aphids are hard to get to as they hide on the underside of leaves. Usually, a blast of water or soapy water should work. Lady bugs are their natural predator.

Peach twig borers - I don’t have them. I have Oriental Fruit moths which cause a similar flagging shoot sign. Pesticide like Imidan should work.

I am sorry you still have quite a few issues. Like I said, some of these issues could be prevented by dormant spray.

You have used quite powerful synthetic spray. However, I do not know when you sprayed. When to spray is as important as what to spray.

I did one dormant oil spray in late January. Sometime around green or first pink I sprayed copper. I was getting some imidan from a fellow tree lover (thanks) and saw early signs of spots just around petal fall. I used a Bonide orchard spray on the stone fruit while I waited for the apples to finish blooming
i sprayed the Indar/Imidan combination on all the trees about two weeks later I waited longer than I would have liked because so many apple blooms kept hanging on. Finally I just removed the rest.

I agree it’s not really representative. I do see some curling but not much. The flagging and scab took me by surprise because of how potent the sprays are.

I guess I was surprised because I don’t feel I could have sprayed any sooner or used sprays that would have been more effective.

When did you sprayed against fire blight with streptomycin?

I used the streptomycin after removing two sections of an Asian pear limb over time. I used a direct spray to the specific limb on the last removal.

I have used surround in the past and honestly got better results than this time with the big guns. Does it make sense to use surround and just a few insect/fungus sprays as a back up?

If you have a better result with Surround, I would go back to use Surround.

Surround to discourage plum curculio and spinosad for moths and Indar for brown rot and scab. (mix them tother in the same tank.

I still think you need copper at dormant for peach leaf curl and shot holes. Copper and oil can be mixed together for dormant spray.

Sometime around green or first pink I sprayed copper.

For peach leaf curl: Spray copper when dormant before green.

Thanks @mamuang for your guidance and recommendations.