Which plums and plumcots varieties would you suggest for zone 5? (We got late spring frost often)

Mt Royal is the hardiest of tasty E. plums and E.plums bloom later than J’s or pluots. There are many other E’s that can probably work- Empress is usually a good choice- huge prune-plums that get highest sugar. As long as your season is long enough to ripen them- they do in Z5 Vermont most seasons. Castleton is earlier, small but delicious and Stanley can be very good when the plums don’t drop off prematurely. Oullins is a gage type that also ripens quite early- earlier than Castleton.

Seneca plum. I’ve been considering trying Cocheco plum, it was developed in New Hampshire by Meader and is supposed to be disease resistant and cold hardy. But needs a Jap pollenizer.

Shiro is a good one . Yellow Jap type . Self pollinates .

I’m going to barge in on your post about plum zones. Hope you don’t mind.
Any suggestions for the same fruits in Zone 7B? I have been looking and looking and cannot make up my mind. I like a sweet plum with that bit of ZING to it. We already have a Methley. A Satsuma. And a Shenandoah - which is apparently native to GA. None are old enough to bear yet. I’d like to add one or two more. Or a plumcot or pluberry.

I’m in 5b also, well it used to be 5b, as far as I’m concerned it still is. So 6a/5b. Most of my plums are too young to comment on. I only grow Japanese plums. I have heard the American-Japanese hybrids do better in colder zones are and pretty good. I’m trialing Toka and Superior. I’m also trailing Vermont Laroda, and Lavina. All of these are grafts. Their is a guy in Idaho I think it is? That sells cold hardy plum scion. Has both types of plums. I bought some Japanese scion from him. Howard Miracle, and Rosemary.
You should talk to Konrad in Canada, he is on Garden Web, not here, an expert on what works in cold areas.

Because you mentioned late frosts I focused on E. plums which bloom a week later and are more reliable in setting fruit after late frosts for this reason. If you want to try J,. plums, I agree that Shiro is your best start- but use it as a mother tree and graft other varieties on it because its quality is mediocre compared to many other J’s. It is more likely to bear fruit in questionable weather than most other varieties but only gets high quality in the best of circumstances- like during dry seasons. But it is a vigorous grower with hardy flower buds so you will want your multi-plum tree to have a branch that bears its fruit.

Purple Heart is Eric’s favorite, but Rema was an inspiration last year for me when much of the J. plum crop was frozen out by a Feb. deep freeze, of all things. The weather had been so warm that buds were already beginning to swell so most of the delicious varieties did not bear, even though they bloomed (probably ovary damage). Rema was delicious and bore very heavy on two grafts in opposite sides of my orchard.

I have what has become my own variety because no other nurseries carry it any more that is called Early Magic. It is another delicious, cold hardy J. plum- a Santa Rosa type, but buds and wood are much more hardy. Its only problem is that it is an extremely vigorous and upright grower so you have to guard against its domination of a multi-variety tree. It bore last year better than most, but not nearly as heavily as Rema and Rema is just as good, but bears later.

I would like to trial Rema, any chance of a scion making its way to Maine? Happy to trade, send a SASE, reimburse, etc.

I would recommend Opal as another euro plum that does well in the north. Self fertile and early ripening. Purple Heart is a fantastic Japanese(or hybrid) type, best out of hand eating I grow. Toka is quite good, productive and should be a good mate for PH. Beach plums are a good way to hedge your bets, they bloom latest of all plums, are disease resistant too.

A good thread, many plums mentioned I didn’t know much about.

Beach plums are a good way to hedge your bets

I want to trial Dunbar’s Plum, which is a natural hybrid and related to Beach. It can be tart to sweet. What I like is they tend to form single trunks. I decided to grow from seed, you should have two for pollination. I’m stratifying seeds now.

Jesse - Doesn’t Toka have low chill hours? I thought it would not do well in cool climates like Maine - (and VA). Toka is the ‘Bubble Gum’ plum, right?

I think Toka and Bubblegum are the same. My Toka has done very well here in zone 5a Maine.

I think Toka and Bubblegum are the same

My Toka does very well here in Ohio. Late frost does catch it occasionally but I always seem to get some fruit off of it. Some years better than others… but that is for everything.

PS… I don’t think it taste all that much like bubblegum… especially Hubba Bubba.

Seneca was touted by Cornell as being brown rot resistant and high quality so I stocked a lot of them in my nursery back in the '90’s. They haven’t turned out to be consistently productive at many sites here in SE NY, although at one site they’ve produced fruit almost every year, for some unknown reason. They seem to be pollen incompatible with Long John as I’ve had a couple sites where I planted both and could get no fruit until I grafted on a couple other varieties. When they bare, the fruit is delicious, but I can’t recommend the variety here.

Jerry,
Shiro is not self fertile where I live. I had only Shiro and Satsuma for a few years. When late freeze wiped out Satsuma fruit buds, Shiro bloomed profusely. It set lot of fruit and they were all yellow out and dropped due to lack of cross pollination.

These days I grafted several J plums and pluots on my Shiro. No more cross pollination issue. Satsuma buds are too cold sensitive for zone 5 in my opinion.

@gdostie-montreal, did you decide ? I live close to you, in a slightly colder zone and I grow Lydecker\BlackIce, RedStar (from Greenbarn) and NY9. All are about 3 years old (3 winters, that is). I tasted BlackIce this summer! Very happy with it. Here is an article I wrote about it. I wish I had taken some pictures. 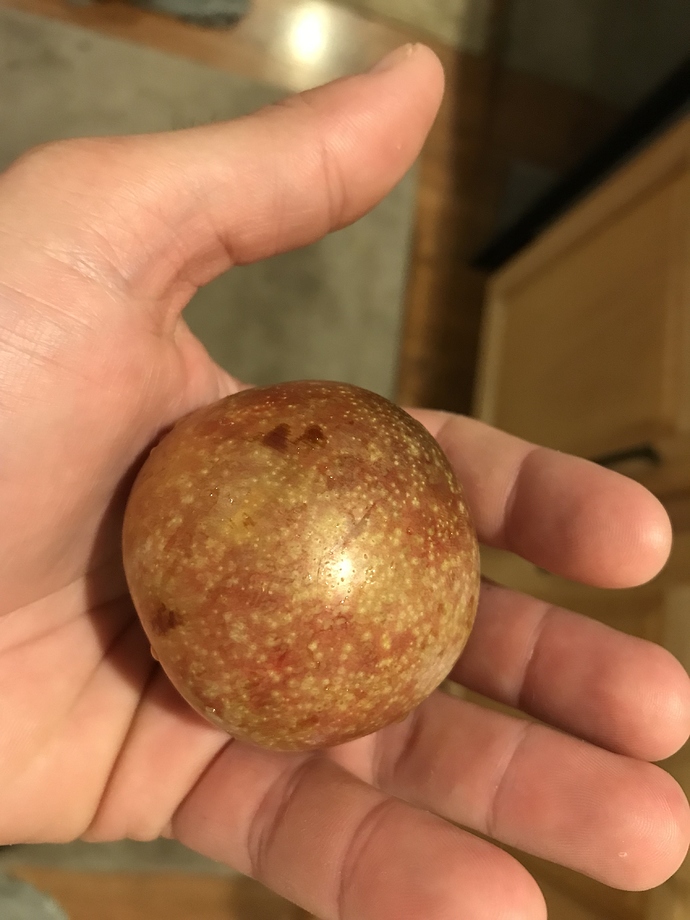 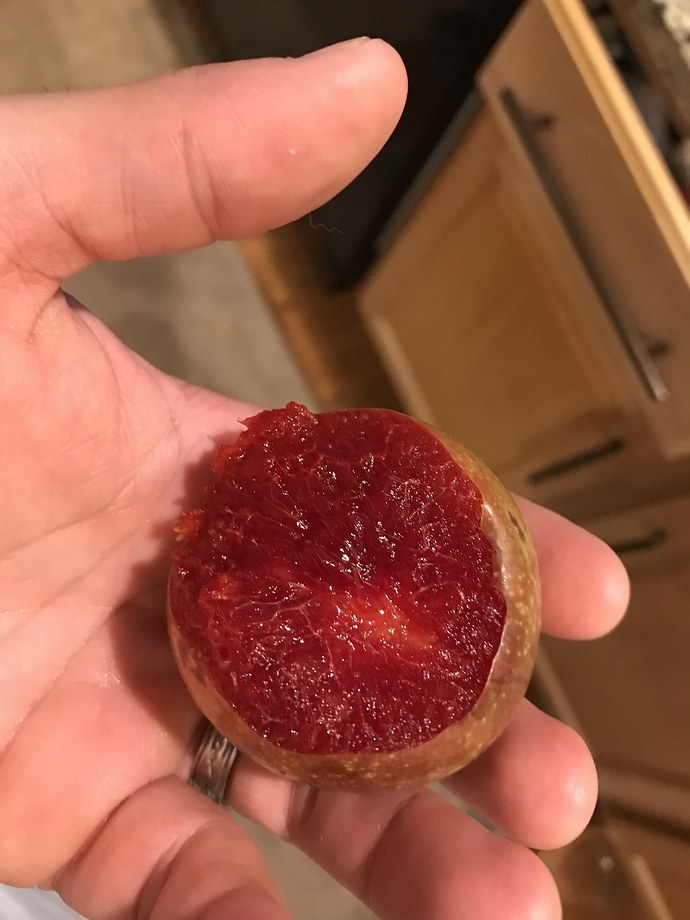 IMG_00033024×4032 1.73 MB
I wanted to share my experience with Elephant Heart plum. It was top grafted to Shiro in April 2016 and produced its first fruit this year - 4 in total. It was excellent, and easily the favorite compared to Satsuma and Shiro. The fruit grew large and had a delicious, sweet flavor with a nice meaty texture, with plenty of juice. It may be dicey in spring with late frosts, but I am very pleased with my first sampling.
5 Likes
alan September 9, 2018, 5:04pm #19

That’s actually a small one- unless you have small hands. They get very large and to me are very much like a red-fleshed pluot— oh wait, I mean pluots can be like Elephant Hearts. They get up high sugar while still pretty firm, whence their meaty texture and the flavor really is excellent. The problem is that they are not reliably productive here in S NY and also take many years to bear by J. plum standards. This was the first year my tree actually produced a large crop of excellent fruit and it’s 16 years in production. It usually produces some excellent fruit but side-by-side with fruit that has hard spots known as pitch-pockets. You don’t know what your biting into until you’ve done it.

I bet the Zaigers used a lot of EH genes in their pluot creations. What I can’t taste in them is any apricot. But the pluot name is so catchy, and they are very into promotion through catchy names.

I planted Blackice, but it will take a while before producing. I will have to plant another plum for pollinisation. I’ll probably plant or graft Toka.