Callery pear seedlings have became a problem in Kansas. Been a long time advocate of grafting over wild pears and using them. My belief now is when planting rootstocks go with Betulaefolia aka BET. 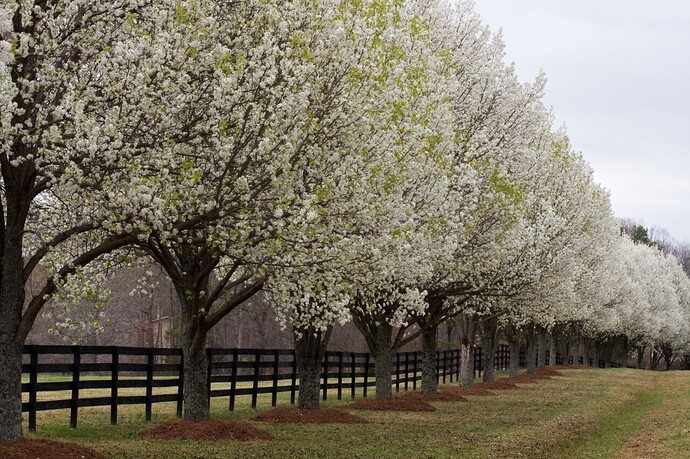 The USDA has been studying the best way to kill invasive Bradford pears and 24 other ornamental trees developed from Callery pears.

BET work as good or better for me in most situations and they are inexpensive. Betulaefolia Pear | Willamette Nurseries rootstock clonal seedling fruit tree ornamental seedlings

In Kansas we need drought tolerant tough rootstocks like callery or bet if we are going to have a crop at my location.

I cannot find pears on Bet being sold already grafted. I have found pears on OHxF 97 and Callery being sold. I am not sure what standard sized tree stark bros sent me as they don’t mention rootstock but it does not sucker much so unlikely callery. Of the standard sized pears I have found they are rare and typically more expensive but they are the Comice from Nature hills on callery rootstock but 92 dollars (their Warren in labeled as Callery but was sent on OHxF 333), edible landscaping sells Warren as a standard sized pear on Callery but charged me 60 dollars in shipping for it. I found edible landscaping has magness on standard size too but cannot find the place I found selling pears on OHxF 97.

I know of hundreds of callery volunteers on public rights-of-way, and that’s going to be the source of my pear rootstocks next year. I’ll reduce the roadside invasives and also get free trees except for the labor.

Still trying to decide on apple roots for next time.

Apples dont do great here but mm111 rootstock for apples do ok.

Yes, M111 is plenty hardy at least to -20 F
but, it’s so slow to begin fruiting that I keep grumbling every time I
happen to buy and plant one.
(Only Niedzwetzkyana has cropped the first year…on a plant already 2 years old bare root…on a M111 for me. I have a couple trees on M111 7th season still no blooms…not counting the year or two of life before I bought the trees.) M7 is fine here, but also pretty slow. MM106 is good if the soil is fertile and drains well…the wait isn’t as long to get fruit).

M111 is not hardy if it breaks dormancy and then the roots freeze…it dies. I have several cadavers to prove it.

M111 is my favorite, but sadly I have to agree they are slow. Mine are even worse. Each year they tease me with a fruit or two. Then the usual maybe next year.

I know it’s not free, but the 97 is a pretty good rootstock as well for pear.

Both OH x F 97 and 87 have disappointed in the lack of growth. OH x F 333 much better in that regard. But callery pear seedlings far and away put on the most growth for me. In one case up to 8 feet.

I’ve got some 97 that has done pretty good. I didn’t graft them or they would be callery too. I love the more standard rootstocks.

Standard size rootstock has not grown too quickly for me compared to semi dwarf rootstock. I have apples, cherries and pears on standard (unknown rootstock for my seckle pear and 2 standard sized Zestar! but I know it is standard rootstock). My standard size pear and apples have put out maybe up to a foot max of growth in their first year. I had a callery Warren pear which put out no new growth all summer. My Black gold on Mazzard has put out less than a foot of growth over the first year. Meanwhile my pears and apples on OHxF 87, M26 and M111 rootstock have put out a few feet. My cherries are two years old but likely around 20 feet from one cherry that put out 3 feet it’s first year is my black gold on Mazzard which puts out very little.

Every location is very different. Mm111 seems to do well everywhere but im sure there is some place it doesn’t. Pear rootstocks it seems that everyone has different results in different places. One thing we know callery and BET will live everywhere. Thats why callery is considered invasive in some places now.

M111 (and M7) indeed do well except in the frozen north. But they take so long to fruit.
The G (Geneva) and B (Budagovsky) are better in that regard.

Callery…that’s one of the things I probably learned from you … how good it is for grafting and converting to other pear varieties.

It’s Been most impressive the past 29 months or so.

M111 is usually a pretty big tree by the time they kick in gear. But when they get going they explode with tons of fruit. I’m M111 and Callery all the way. Standard rootstocks are the best. IMO