Biennial bearing in pears , apples and other fruit trees

Not every crop is Biennial. Some fruit trees are predispositioned to this condition. Biennial bearing - Wikipedia
" Biennial bearing (or alternate) bearing is a term used in pomology to refer to trees that have an irregular crop load from year to year. In the “on” year too much fruit is set, leading to small fruit size. Excess weight in the main branches can be too much for their mechanical resistance, causing them to break. Another major consequence is that flower induction will be lower, and the subsequent year will be “off” year (too little fruit).

The behavior could be due to plant hormones, particularly gibberellins produced in excess in the “on” years in the embryos of the young fruit. It could also be caused by depletion of carbohydrate reserves in the tree.

Biennial bearing is more common in certain fruit crops like mango, apple, pear, apricot and avocado, and is almost nonexistent in grapes.

Biennial bearing is a regular feature of Arabica coffee production in Ethiopia and East Africa, and indeed throughout the coffee-growing world. In Biennial bearing a good or excellent (bumper) crop is followed by a poor, low-yielding crop in the next year’s harvest. This phenomenon occurs independently of weather and climate, so that even when climatic conditions are favourable for a good crop, the yield can be poor. There can be a fivehold (x5) difference between on and off years, although in extreme cases there can be a tenfold (x10) difference in Ethiopia and areas of East Africa.

The biennial cropping rhythm is due to the allocation of the plant’s resources: in the productive ‘on’ year, the coffee tree puts it’s resources into producing the crop at the expense of vegetative growth (stem growth and particularly shoot development and flower bud production); in the ‘off’ year the plant must make up for this vegetative shortfall, at the expense of flower and fruit production.

Biennial bearing can be reduced or almost eliminated using various means, including pruning, the addition of fertiliser, controlled irrigation and the use of selected vigorous clones or cultivars."

"Why do fruit trees tend to bear heavy fruit crops every other year?

Why do fruit trees tend to bear heavy fruit crops every other year?

The tendency of fruit trees to bear fruit in two-year cycles, consisting of a large crop followed by a small crop, is termed alternate or biennial bearing. Alternate bearing occurs in almost all tree fruits.

The flowers that produce next year’s crop are initiated during the development of the current season’s crop. When a fruit tree is producing a large fruit crop, most of the tree’s energy is utilized for fruit development, little energy remains for flower initiation. As a result, a fruit tree often produces a small number of flowers and fruits when preceded by a heavy crop the previous year.

To discourage alternate bearing, home gardeners should thin apple and other fruit trees when fruit set is heavy. Hand thinning of apples should be done within 6 weeks of full bloom. Leave the largest apple in a cluster unless it is damaged. After thinning, apples should be spaced about 8 to 10 inches apart on the branches. Pears, apricots and peaches may also need to be thinned. Fruit should be spaced 6 to 8 inches apart on the branches. Plums will generally thin themselves. " Why do fruit trees tend to bear heavy fruit crops every other year? | Horticulture and Home Pest News 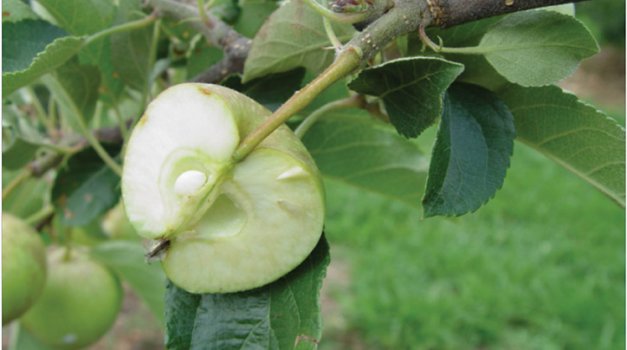 Developing seeds inside apples send strong signals to apple shoots telling them not to set flower buds for the next year. Thinning reduces this signal.

Biennial bearers are the bane of apple growers, but the industry is growing more of them. Many newer varieties, like Honeycrisp, Pacific Rose, Fuji, Cameo, and Braeburn, are prone to alternate light and heavy cropping.

Even the less-prone varieties can be shocked into biennial bearing patterns by such events as major freezes that eliminate apples for a year. “Frost damage is a tremendous trigger for biennial bearing,” he said.

McArtney has made a career of searching for ways to settle biennial-tending varieties into annual bearing patterns. He’s been the apple specialist for the four southeastern states of North and South Carolina, Georgia, and Tennessee since 2003, after spending 16 years with HortResearch in New Zealand.

A successful chemical thinning program will often result in returning an orchard to consistent cropping, he said, noting that after chemical thinners came to the market about 1950, the national apple crop showed much less year-to-year size fluctuation.

Studies show that the seeds in developing apples produce gibberellins that suppress bloom the following year by inhibiting flower bud formation. Lots of fruit mean lots of seeds, and that means few flowers the following year.

“Chemical thinners take off a lot of fruit—and also a lot of seeds,” McArtney said. “Thinning takes away the gibberellin signal. Without the signal, you’ll more likely get a flower.”

But with the really sensitive varieties, like Honeycrisp, Pacific Rose, and Fuji, a good chemical thinning job is not enough to guarantee a good return bloom, he said.

The following are the steps apple growers might want to try if they’re hoping to tame a problem orchard’s ­biennial bearing.

Summer sprays: Use NAA or Ethrel (ethephon) summer sprays in the heavy cropping year to increase flower bud formation the next year.

NAA may be applied in four applications of 5 parts per million two weeks apart in June and July, or it may be applied in four weekly sprays starting one month before harvest. The preharvest spray somehow changes vegetative buds to flower buds, even after the usual period when the tree makes these decisions, McArtney said.

If Ethrel is used, it should be applied once six weeks after bloom. The rate of Ethrel depends upon the variety, he said. Severely biennial varieties like Fuji might need rates as high as 72 ounces per acre, while varieties that are only slightly biennial will only need 16 ounces per acre. A rate of 48 ounces per acre is recommended for Golden Delicious. Ethrel should not be used on Honeycrisp as it might worsen preharvest drop.

McArtney finds NAA easier to use in the orchard because it is one rate for all varieties and can be included with summer cover sprays.

Bud analysis: Dissect some buds after harvest and see how many are vegetative and how many will throw blooms next spring. What you find will help you decide how heavily to prune next winter. When cut open, the meristem appears either flat or domed—and the domes are the first sign of next year’s flower buds.

“If your orchard is a mixture of heavy- and light-­cropping trees within a block, then you might want to delay pruning until you can see what you’ve got,” he said. “Don’t bother pruning the light-­flowering trees, and prune the heavy-flowering trees more aggressively.”

Hand thinning: Follow up with hand thinning where necessary, setting a target number of fruit per tree and taking off the smallest fruit, and paying no attention to fruit spacing.

McArtney spoke to growers on this topic during the Mid-Atlantic Fruit and Vegetable Convention in Hershey, Pennsylvania, last winter."

Certainly a investing topic given the posts the last few days. I never would have thought there was chemicals that could help with this. Anyone know if the chemicals are included in the soil or on the tree itself and if they are available to the general public?

Since the seeds produce a hormone which reduces bud formation it would follow that cultivars which tend to have reduced seed formation in the fruit should be more often likely to bear regularly. ‘Centennial’ crab comes to mind. It’s productive every year with low seed set. A fair number of the fruits turn out to be seedless even.

What happens when a tree has been grafted with multiple varieties? If one of the varieties is strongly biennial, will the entire tree become biennial?

No not at all multigraft trees don’t change the way a pear produces completely. It’s my opinion if you graft a quick to produce pear on the tree the others should produce faster due to hormones but the bad news is the pears don’t share my opinion. I’m still trying combinations and some with success but from the rootstock not other scions.