The local big box stores (the orange and blue ones) stock dormant plants in boxes around February 1 each year.

Blackberries, strawberries, grapes, etc, as well as some things like hydrangeas. Then of course, in a few weeks, they have leafed out with foot long, light-starved sprouts, and it’s way too cold to actually put them outside yet.

i see it every year here. its mid march they get delivered and our ground is snow covered and frozen until mid may. then they stock plants that aren’t hardy here. what a waste! i did manage to save a montmorency cherry last spring. it had died down to a green sprout near the base. i cut it down to just above it and planted it out under a milk jug until it hardened off. didn’t do much for a few weeks then took off like crazy! was 4ft tall by the end of summer. luckily one of the workers had the insight at the store to keep the roots watered.

Our winters are mild enough that you can plant much of the winter, (the ground freezes only occasionally) but we still have enough cold weather that you don’t want to plant something that’s leafing out in February, either.

However, one issue we have this year isn’t so much that the ground is frozen, (it froze for a few weeks last month) but it’s basically a mud pit, so you still don’t want to be digging around.

The only workaround is to basically buy them within a day or two of them being stocked, and get them either outside while they’re still dormant if the ground is workable, or stick them in the fridge for a few weeks.

That’s the other issue. The employees in those stores, through no real fault of their own, have pretty much zero knowledge when it comes to plants. Last spring, I remember being outside of one of those stores, the “orange“ one, and they had all of these beautiful tomato plants outside on April 3, and it was about 41°.

The other thing they do is not water them. Five or six employees can walk by an entire table full of wilted, parched plants, and not one of them thinks to pick up the damn hose.

I think a lot of people, non-gardeners in particular, fail to realize that container plants need a lot more water than plants in the ground.

In fact, I remember overhearing a conversation one summer and that was something like “I don’t want to overwater them, it rained two days ago” but it had been 90° and sunny the two days since. The plants in containers were bone dry and wilted. Container plants can dry out in a flash.

my father used to give those folks hell when he saw those plants in that condition! you would think these nurseries that sold these plants would add some water crystals in there so the roots could stay moist longer

Bare-root starts appearing here around December 15th, and all the real nurseries have it in stock by January 15th. Planting it out at that time is no problem either. I’m not surprised thatthe corporate offices of the orange and blue stores in Atlanta direct there outlets to do the same thing in Maine!

I managed to catch some blueberries when they first arrived in the past, then was able to keep them in a sunny window in pots for another two months. It wasn’t really worth the hassle, but the plants did survive.

With some vendors (like Bonnie plants), the box store only pays for the stock that sells. Any shrink is written off and absorbed by the vendor that brings them the plants. Some members of management at some locations, like my best friend, do everything that they can to keep plants watered, but the majority see it as “not my problem” and just wait for the vendor to return with fresh plants.

The I have had run ins with the garden center staff numerous times and have even written corporate before and surprisingly was contacted by the department manager. Did it do any good??? No. The people that care for these plants are ignorant of their care.

We also get the small plants in the orange and blue and the brown one that used to be blue and in a red one where farm stuff is sold. Mostly it is items that do not grow here…gooseberries, jostaberries, table grapes, northern high bush blueberries, rhubarb, etc. some of the plants can grow here but have special needs like the rabbiteye blueberries that I have seen for the first time this year. I’m really good at stopping while people are looking to buy and telling them what they can plant here and what is a waste of their money. No one knows and that is how money is made year after year. I feel so sorry for the plants(as if they had feelings)!

Seems so wasteful and pointless to me.

Considering they sell abominations like this. I don’t think their target demographic is savvy gardeners: 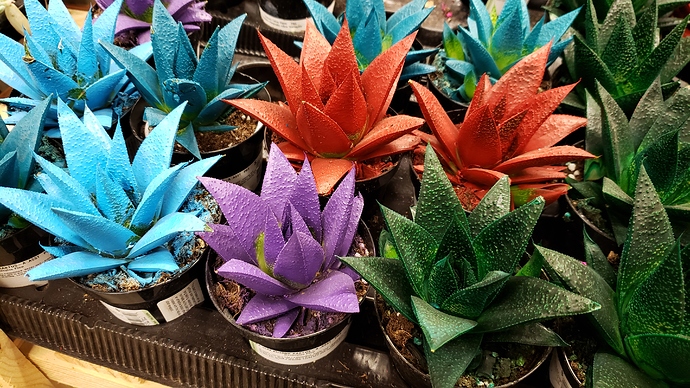 ,and cacti with fake flowers glued on

We have one farm-centered, local big-box that is pretty impressive here. But I think they must give a bit of leeway to their store/department managers, because the two locations I’m familiar with vary in their stock and even season for garden supplies.

But both have stocked fruit trees that make sense in our climate - asian x american hybrid plums, many of the U of MN apples, and the hardiest/longest-chill peaches. They even had honeyberries here last year. I don’t know if anyone in the general public knew what they were, because they had quite a few left in July at clearance time.

The only strike against this chain is that their supplier must be more southerly because their stock is usually 2-3 weeks ahead of us in blooming/leaf out. But that is pretty typical for nursery stock here.

I wonder if the early leafout is more due to sitting in a warm truck for several days. I’ve seen it everywhere I’ve lived.

We had honeyberries for sale here last year, too. I snagged them off of the clearance rack- they must not have been selling well. I check there often because what they dont sell quickly off the clearan rack, they toss in a big dumpster.

usually its stuff that just didnt get watered appropriately.

It’s not that hard to water plants!

every year here. its mid march they get delivered and our ground is snow covered and frozen until mid may.

I noticed that HD got it’s tree in on Feb 9th. Really early for planting here. In the 2 weeks since, I doubt that they’ve sold a tree. In recent years, I’ve started to do it, but you need to sneak them in during brief periods where the ground isn’t frozen solid. So, I would buy now, if I had space for what they are selling. 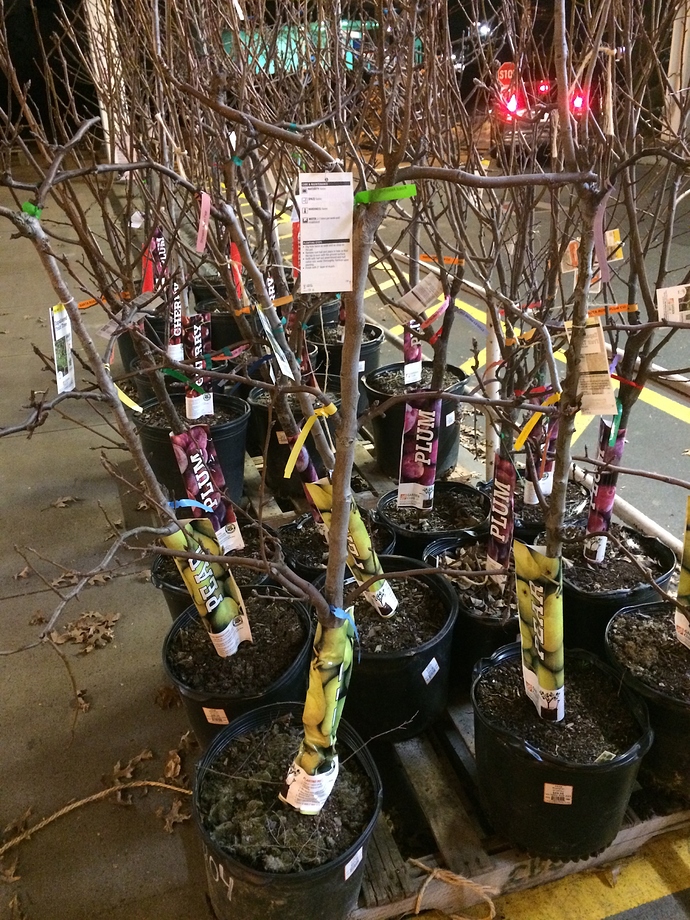 Some of the trees are pretty nice. I didn’t measure, but I bet this plum is close to 2" caliper and 8’ tall. Not cheap at $70, but I would do it if I wanted a Stanley prune plum. 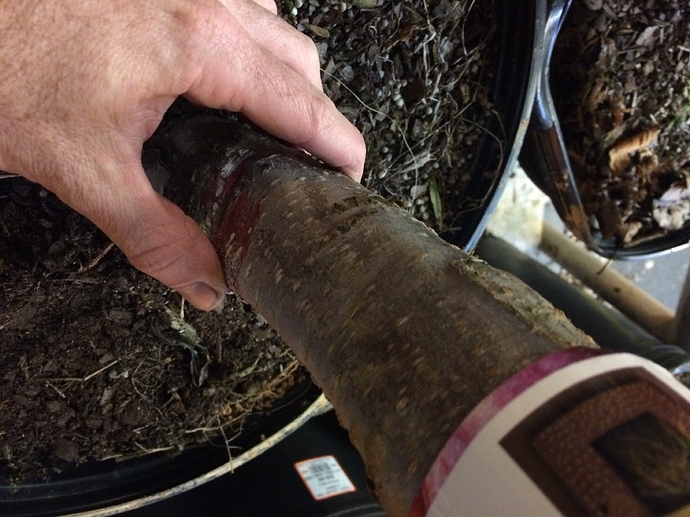 Their 3 tier apples and pears were pretty nice, but some of the multi-grafts are a bit un-even. Here’s a multi-graft Euro plum where one of the grafts is tiny (the Itallian Prune near the bottom of the pic), while 2 others are overshadowing it and huge. 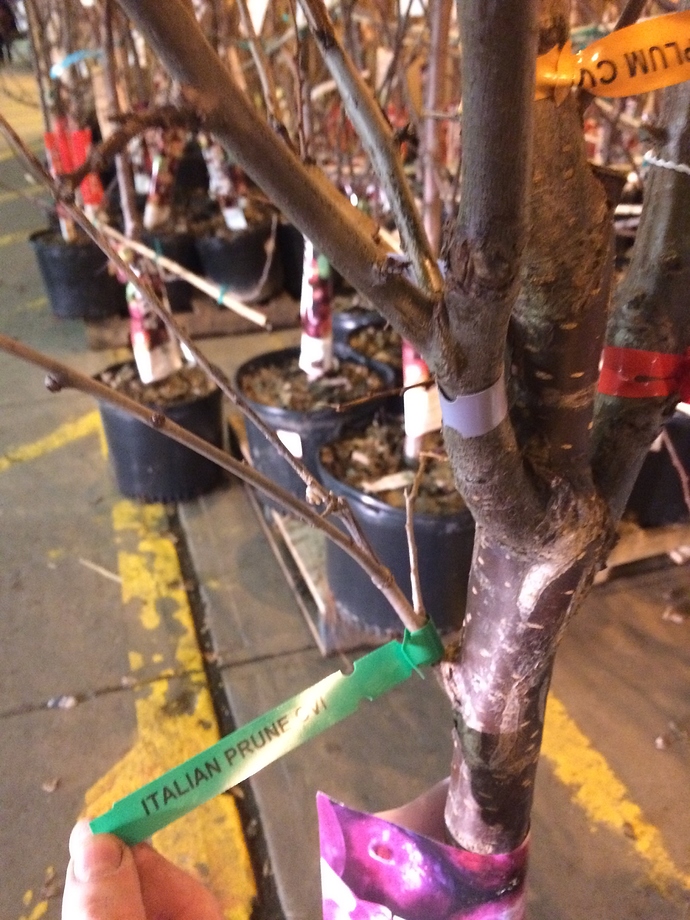 Heh- Gooseberries grow fine here and I’ve never seen them at HD or Lowes. I don’t think I’ve seen rhubarb either, something my mother was asking me to grow (she like it from when she was a kid and several family members grew it).

Nothing outdoors yet. Just grapes, brambles, etc that are in the store and have foot long shoots on them!