I was trying to evaluate the netting from these two suppliers, both of which appear to be well-regarded.

Does anyone have experience with both and, if so, have any thoughts on the respective strengths or weaknesses?

Would like to know if anyone has used either of these company’s nets to keep out squirrels.

I do use the American netting to keep both birds and squirrels out or my blueberry bushes and a J. plum last year.

I made a tent with four corners and secured the bottom on all sides so no birds or squirrels could go under.

Two birds got caught and tangled but the net is very stretchy so I could get the birds out with no injury (to the birds). There was a large hole in one area of the net that was on the ground. Either squirrel, possum or groundhog chewed on it but no damage to fruit or tree.

I like the netting. It did not do damages on leaves/twigs/branches like the cheapy black one from Home Depot.

I purchased American Nettings because they had the sizes I wanted, while the other company didn’t. They also appear to last longer. Mine stay up year round and are no worse for the wear. I also like the green color vs the black. It looks more appealing in the yard, and yes, they keep out squirrels…

Hi, I too use American Nettings. The nets are strong and I can remove them and use them more than once! Some of my nets are going on third use this year. I think they are the best. They have all different sizes, they keep out squirrels. I use heavy silver tape to gather the netting around the trunk, and tape it so the net is secure, That is how you keep out squirrels. If you leave the nets on the branches of your trees will go through the netting. I remove them and store them in the fall. Mrs. G

Thanks for replying mamuang. Will try it on espalier peach at a friends house.

I want to thank @alan for recommending woven nets by American Netting. Today a friend helped me put one of their 30 x 30 nets over my Asian persimmon Giboshi before all the creatures around here take every fruit. It slipped over the top of the tree without hardly snagging, very easy to work with.

You are welcome. And if any forum members can find a source of similar netting in 30 by 700’ rolls I will be as grateful as Hambone. It used to be available this way for half the per-net cost as AN pre-cut nets. They have cornered the market on nets big enough to cover an average sized free-standing tree in this country and vineyard netting is typically only 15’ wide. Time is too expensive to justify sewing nets together here.

Can somebody add an update to this thread? Is everyone still happy with their American netting? I see few people mentioned it keeps the squirrels out. @mamuang it has not been your experience right?
I’m about to place an order for this netting and a tube trap for squirrel trapping. But I want the tube trap to be my last resort.

I love my American netting. Like anything else if you take care of it it will last longer. I have recycled some of my American Netting for six years. Great stuff. Squirrels can chew through it but it takes them far longer. It is removed in the fall , folded, and takes the winter off in the shed.

My squirrels are far more vicious (hungrier). They chewed through. Or maybe, it’s the opossum or some night hunters. I do’t have a camera so I could not tell who did it.

Mine looks rather bad now since a few birds got tangled in it. I was a wimp so I cut the net to let those birds go (one chipmunk). It’s a nice netting and easy to put on and take off.

I noticed that after one season, my 30 x 30 bird netting from AN’s took quite a beaten. I saw a lot of damage as I took them down and folded them up to store them. My belief is that the heavy damage was done by raccoons. The nets did protect the fruit though. Just don’t think I will get more than 3 seasons at this rate.

Also, for any net to be totally affective, it should cover the entire tree and have enough size to be tied to the trunk - leaving no openings. I find that for me, 30 x 30 barely covers most of my adult trees.

Due to these things, I’m considering purchasing the commercial grade drape netting. Product number KDN15. The 49’ x 328’ roll can be cut to make 7 huge nets that will cover my largest trees, last longer than the bird netting and cost about $70 per tree (where the 30x30 cost about $50 per tree). Expensive but perhaps worth it. 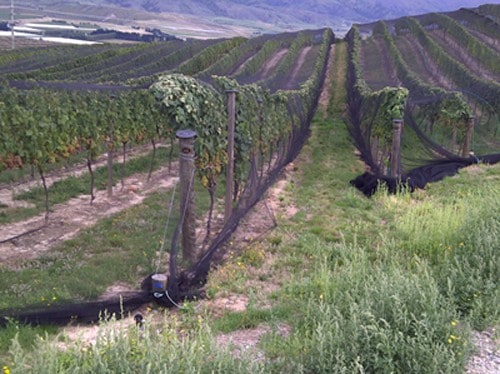 Vineyard- Multi-Row & Drape Netting keeps birds away from your fruit. Can be Installed on overhead wires, draping over rows, or attaching to trellis wires with Net Clips.

Thoughts? Have any of you tried the larger, heavier commercial products ANs sells?

I have this drape netting over pvc that surrounds my blueberries. I cut a long row of it in half, and each half lasted 4 years- then I get a bit more life out of the leftover pieces covering my cherries. I have to leave it out all year because of deer. It is very tough at first, but after three years in the sun it gets brittle and starts to tear easily. I’m getting ready to order more. It’s expensive but I like working with it.

It it too heavy to go directly on a fruit tree? I obviously don’t want to build frames for all my trees. Thanks

No, it’s very light. I wouldn’t need a frame over my blueberries except for the fact that it snags berries like crazy and rips them off every time the cover goes off and back on during harvest. Which is about 10 times a day for me with all the neighborhood kids coming in and out.

American Nettings has a monopoly for some reason. If you have a lot of fruit trees over $50 a pop is crazy for a little spun plastic. I often ask my customers to order it because I can’t make any money selling it to them- AN doesn’t even offer a quantity price.

One can purchase rolls of 15’ wide netting in quantity for less than half the price per square foot as AN charges for individual squares, but sewing them together tight enough takes time and a certain amount of ingenuity. AN used to sell 30’ by 700’ rolls but they seem to have decided they can double their profits from fruit tree lovers by not offering it. I have no idea why the product is now unavailable elsewhere. It may be because the commercial market is in protecting grapes only.

Hard to put a price on not being able harvest your crop. These raccoons are ruthless and will strip a tree overnight. When I bought from AN, I purchased the 30 x 100 and cut it into 3 pieces (only saved a few bucks). As for buying 15’ foot and sewing them together - I would not have the time or patience’s for that. Time = money.

7 nets would work for me as I could rotate them between harvest windows across several trees.

Coons are easy if you just keep the bottom 3-4’ of trunk free of branches and staple on about a 32" cylinder of aluminum flashing. Squirrels will jump at least 4’ at times and also can pull themselves up the flashing when they are hungry enough. I paint the flashing with a mixture of axle grease and motor oil. Sometimes they need to be repainted as squirrels will sometimes climb and slide until they’ve removed it all. I manage coons by trapping them out at my own property, but some years that requires a lot of trapping and killing.

Of course using flashing requires fairly vigorous free standing trees, but it works much better than nets, if only because you don’t have to open anything to reach the branches. Coons love to tear up the nets when fruit gets trapped in the bottom of them. I still use nets for coons and squirrels at some sites, but more often just for birds. Birds can’t tear through them even if they are starving.

These raccoons are ruthless and will strip a tree overnight.

I never had a problem until I had fruit trees (I’ve gardened many years). Not only do they take the fruit but my experience has been that they destroy the tree (or vine or bush) as well. They, like squirrels, are destructive and IMHO a grower must work on reducing their population, like Alan mentioned. I consider it a service to mankind.
A few quick calculations will also show that it is cheaper to trap than to build a Fort Knox to protect your fruit. Just sayin’

Hymmm, my only point is that some netting is a good idea as if done properly will stop squirrels, birds, possums and raccoons. Trapping is just another tool and can’t be your only tool or even your primary tool. I trapped and kill 2 coons and 3 possums last year but without nets, the others would have stole my fruit. Raccoons are not like squirrels, they get smarter after they see their friends and family get caught and start avoiding the traps. I killed two in a row and then nothing; they even flipped over one trap to try and knock out the bait without entering. You can’t kill an entire population of animals so you have to have a multiple weapons…just saying. $500 worth of nets that could last 5-10 seasons and be moved across 7-8 trees within a growing season is worth it to me. It only takes one raccoon walking right pass your trap to clean an entire tree in one night.

I simple wanted feedback on this particular type of netting that is not necessarily designed for fruit trees.