Anyone know much about this peach? Chilling hours, when is fruit ready (in relation to Red Haven or Elberta)? Is it similar in taste to In Blood (cling or Free)?

I’m growing it in coastal Northern California as a companion to Indian Free. They bloom at the same time (fairly early here) and ripen at the same time (fairly late). Taste is similar, though Black Boy is perhaps a bit tarter and more consistently dark-fleshed. Black Boy is also self-fruitful, while Indian Free is not. I’m quite fond of both. Disclaimer: my trees are young and have only fruited twice, so my data set is limited as yet.

I put in an Indian Blood Cling this year as well, and it appears that it will bloom a little later. I understand that it ripens earlier, though.

So far, all three of these have been quite curl-resistant here, as has Peregrine.

I have a ‘Black Boy’ peach. This is its third year. Lost all blooms to frost last year. Checked my peach buds today and a number of them are brown, but many are still silver and fine. They are self pollinating . I’m zone pushing with the tree. It should be farther south. My Elbertas do not ripen till mid to end of Sept. I don’t think black boys ripen before the beginning of oct. we’ll see but hopefully I will have moved by Sept.

Thanks Jerry. You tried growing any from seed?

Hi Mrs G 47 (Hope that is right). Thanks for the info. Where are you moving to?

Didn’t grow these from seed, no. The Black Boy and Indian Free came from Raintree, the Indian Blood Cling from Bay Laurel (DWN), and the Peregrine from Trees of Antiquity. All are on Lovell.

I grew both BB and IF. I agree with jerry, they are similar. The BB was more prone to mealiness and otherwise I noticed hardy any difference, so I took out BB a few years ago. Unfortunately both are bad for rot. I’m getting a little tired of IF rotting on me, I’m not doing enough sprays. Fortunately Sanguine Tardeva is doing well, its an early IF with much less rot.

Where can you get a Sanguine Tardeva peach? Doesn’t look its commercially available. Will it grow true to its parent from a seed?

I don’t know if its true from seed, but I have a bunch of its seedlings growing. Most have something grafted on top by I try to let a limb from the stock grow as well to see what comes up.

If you can graft you can trade for it, quite a few people people have it.

Are all those peaches safe///do they bloom late?

I’ve always wanted to try one of these but in my climate…it will be snowing by the time they are ready.

I don’t really have a problem with rot so far with IF. Also wanted to mention Arctic Glo nectarine is one of these red fleshed types, and I think it’s better than Indian Free. I crossed these two and have three seedlings growing, still first leaf. So in 6 years I’ll let you know if I got a good one.

All of the red flesh peaches excepting Indian Cling are mid-period bloomers. I’m not sure how hardy they are.

All of the red flesh peaches excepting Indian Cling are mid-period bloomers. I’m not sure how hardy they are.

I have to try them at some point. I really like these peaches. Although I have two, how many does one need? Well 5 with the hybrids. Both mine appear hardy, IF is a late bloomer here.

Those of you considering growing Black Boy take note: Raintree has started accepting 2018 pre-orders for it now. There’s a limit of one per order, and they tend to sell out fairly quickly. I haven’t run across anyone else in the US selling it thus far.

Both Black Boy and Indian Free were very good here this year, despite our cool coastal climate.

Hi Jerry I am in Scotts Valley near Santa Cruz and have my first crop of Black Boy peaches this summer. Started from a seed 3 years ago. They look like like the Black Boy I am familiar with in New Zealand. Wondering if you could tell me when they are ripe where you are. I guess it would be similar time to here. They seem quite late to me

Yes, they’re relatively late. I just had some BB preserves with breakfast this morning, and the jar was labelled 9/18/2020, so we should be about three weeks from harvest here in West Marin. Your peaches might ripen a bit earlier in Scotts Valley, as we have a strong marine influence here.

Good luck with your first crop!

How big are black boys suppose to be? Wondering if it’s our dry year or if they are suppose to be small. They all suddenly ripened this week.

Hard to know if the drought affected their size, but they do tend to be small-to-medium in size here even with normal rain. Thinning them properly - always a challenge for me - helps bring their size up a bit. 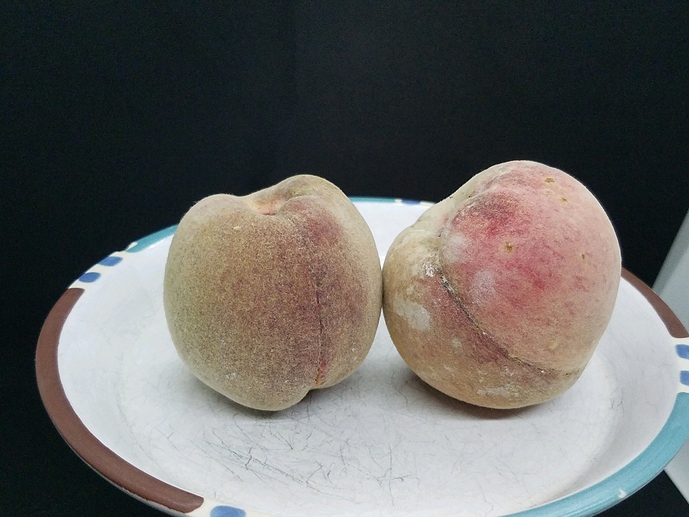 Here were mine in 2019. One was Black Boy the other was Indian Free. They were both on a small size. They looked alike and tasted alike. Black Boy was more bitter, to my taste.

I have both as well. Both taste tart sweet this year, but it’s also the first year for them. I have no idea what they should taste like.