I have a single in-ground Chicago hardy fig and 5 additional potted figs that will be out in ground next year. I am admittedly not willing to to go to elaborate lengths to protect these in ground figs. No wooden enclosures full of leaves or other insulatory type material for this guy. What I would be willing to do would be to wrap the trunk and most limbs with the black water pipe insulation that looks similar to pool noodles. They are slit up the side of the tube and I thought I could slip some of those on if it would help protect the tree. I don’t know if these would prevent too much airflow and kill the tree or not. If these won’t work I’ll probably just let nature take its course and kill the tree back to the ground.

Speed,
I do not know if that would be sufficient.

I just winter protected mine this morning. I did an easy way. I tied all branches up. Then, cut the bottom off leave bag, put the bag through the fig tree like a cylinder, filled it up with mulch ( did not have dry leaves). I had burlap handy so I wrapped the bag with burlap.

I will find out if my method would work next spring. 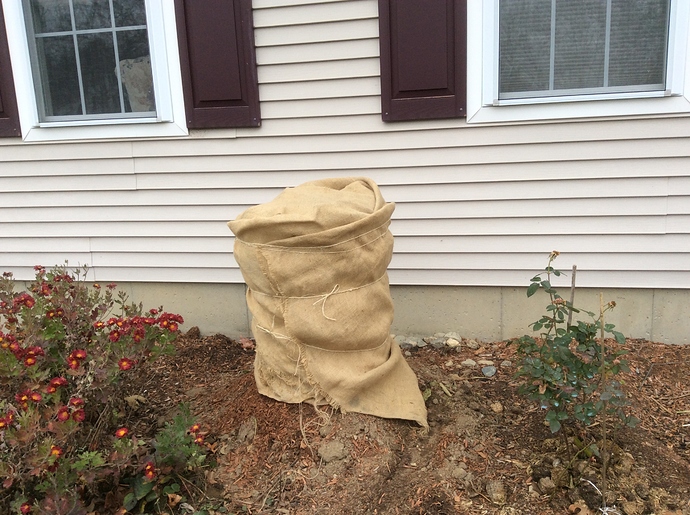 I had a Fig in the ground a number of years ago and knew that an Arctic system was sending some cold air into the PNW,where I live.
Normally the winters get about 15-20F for the lows,but the temps were forecast in the single digits.
There wasn’t much time,so I did use those foam pipe protectors.The plant looked very odd and still froze to the ground,but grew back in the Spring.
mamuang is probably right,they will need more insulation for zone 6B. Brady

I am in zone 8b and used the foam tubing before on my fig trees. I even covered the branches. By the end of winter all branches were dead. The main trunk was over 2" thick and the top part still got hit. I’m not sure that this type of insulation is enough or good in your zone. Wrapping tour tree with dried leaves allows the tree to breath while protecting it from wind which is more destructive than the cold is probably better than foam which might suffocate it and cause rot.

IMHO wrapping makes temps consistent around the tree, the wind has a drying effect, which is not good, and certainly helps if you can eliminate it. But like other plants, the freeze-thaw cycle is what kills many. Keeping them wrapped keeps temps constant, and stops the freeze-thaw cycle, thawing in the sun, freezing at night. Also keeping the roots warm with mulch is a good idea too. The last 2 years I have used wilt stop to stop the drying winds on my trailing western blackberries. They are not hardy here in zone 5b. I have been blessed with abundant fruit from them the last two years. I plan to once again spray them, and my fig trees too.

Here is a picture of my Chicago hardy. With temps getting down to 20 this weekend I’m having second thoughts about letting the fig fend for itself. I still don’t want to make a big wooden structure but now I’m thinking of wrapping the plastic deer fence around it in a 24" diameter and filling with leaves. Do you think that would help?

I’m not real sure how flexible this limbs are right now but I could try bundling them up, wrapping tree with burlap and then filling with leaves. I did not prune this tree at all this summer.

Your tree seems very close to the house. Isn’t the heat from the house enough for it to survive out side? I mean being a hardy variety.
Also is that enough space for it to branch out?

I may move it a foot further out. To get micro climate from my house, I can’t move it too far out. Don’t want it in my lawn, either.

Our area is cold so I don’t think fig can grow very big. Even with protection, it may die to the ground anyway. That is the size control in itself.

I’m trying a couple different methods with my outside figs.

The first one is a lot like Maumang’s. I filled buckets with leaves, then covered the figs. I figured that the buckets could overhear, so I put some aluminum foil on them, shiny side out. I was lazy about it, so I only put it on the South side… 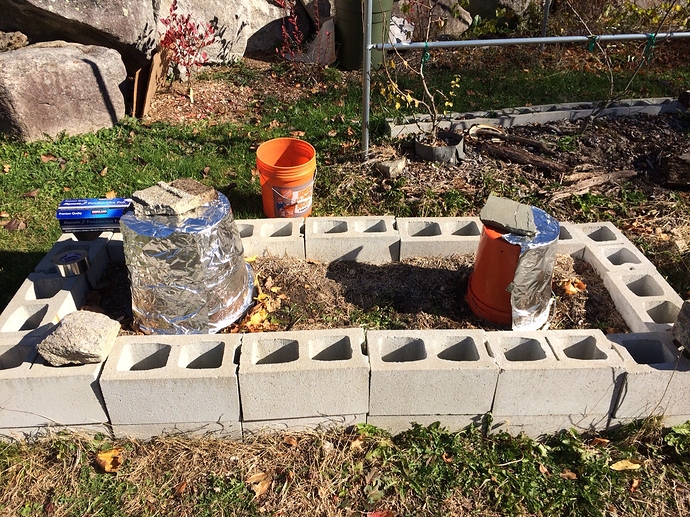 For a few other figs, I re-used some old silt fence and filled it with leaves. 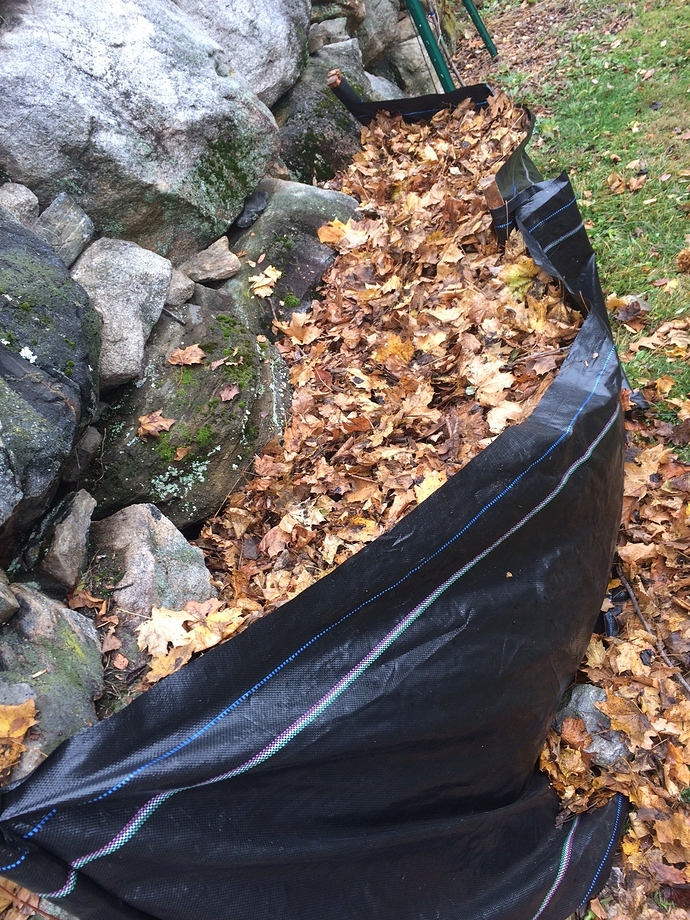 Neither of these will work if the fig gets huge, but the silt fence approach could keep the bottom of the fig from dying- at least then, there could be a small early crop, rather than having it die back to the ground every year.

Bob,
Are you concerned about lack of ventilation with the bucket method?

I don’t know if my fig could breathe inside the Leave bag but at least it is paper.

I think it will be OK, but this is the first time I’ve done this, so I’m not sure. Both buckets have air holes (originally made to drain water), so that should help. That was the other reason I didn’t put foil all over it- aside from it wasting foil and time it would block the holes, though I suppose I could have punched holes in the foil.

Has anyone tried using a big tomato cage. Put the cage around the fig, wrap the cage with weed barrier, then fill with leaves. My figs are small and in pots, but when I put them in ground I thought of tried this method to protect them.

I was thinking about it but the cage I have is too small. You would need to tie up the branches so none would venture outside the cage.

Well I didn’t get a chance to do anything to the CH tree and it’s getting down to 21 for the next 3 nights. Probably gonna be toast

Finger crossed for you.

I meant to spray Wilt Stop but kept forgetting. It will be cold here tomorrow until Monday with low about 19 F. Oh, well. Another missed opportunity.

I meant to spray Wilt Stop but kept forgetting. It will be cold here tomorrow until Monday with low about 19 F. Oh, well. Another missed opportunity.

I don’t know that you missed much- I sprayed Stop Wilt on both persimmons and trailing blackberries (Newberry) last winter and didn’t notice much impact. It is possible that it helped one of the persimmons, a bit, but I’m not sure. It still had massive die-back, with a bit surviving higher than I expected. In the spring, I sprayed a bunch of flowers (one branch per tree, marking the branches) before the hard frost and it actually seemed to hurt- none of those flowers set, while some of the unprotected ones pulled through. Obviously, my tests aren’t conclusive, but not very encouraging either.

Thanks for your report on your experiment. I hope to do something like myself next fall.

I’d guess your tree will be OK down to 10-15 f. without any protection. Did you check it out today?