Harvested these two today. I’ll estimate they’re a half pound each. One of my favorites for my climate. 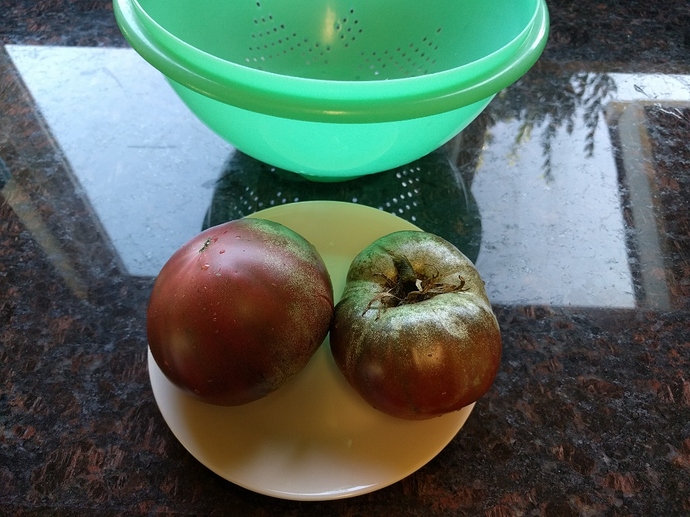 They are my favorite tomato for flavor. So savory. But they crack and rot so bad in humid KY. Enjoy yours for me!

I read, I think it was in a seed catalog, that Black Krim was the healthiest tomato. I wish I had a better source to justify this claim, but I still consider it to be true. We grew them the last few years, but not this year due to their difficulty level.

I read, I think it was in a seed catalog, that Black Krim was the healthiest tomato

Well, it is healthier than say Burpee’s Better Boy but only by a blackberry; i.e., BB + 1 blackberry would be about equal to a BK in anthocyanins. As for being the healthiest tomato I kind of doubt it. Such a thing would be by flesh density and my guess is there are other contenders such as Cherokee Purple and Paul Robeson. I could grow the latter two at my former address but they’re too large to ripen properly here.

I ordered Black Krim seeds from Burpee this year and started them in the spring. A few weeks ago they sent me a letter stating there was a mix up and my seeds were labeled wrong. I was glad they contacted me, kudos to them. I’ll give Black Krim another shot next year. Ironically, I did a horrible job labeling my own tomatoes this year and half of them got mixed up. I do remember which one was my Brandy Boy, though, and so far they’ve been terrific. Thanks to @alan for the recommendation!