I picked this Black Mission breba fig today. I would have left it hang until tomorrow, but it fell off in my hand when I cradled it to take photos. Seems to me it was begging to be eaten. 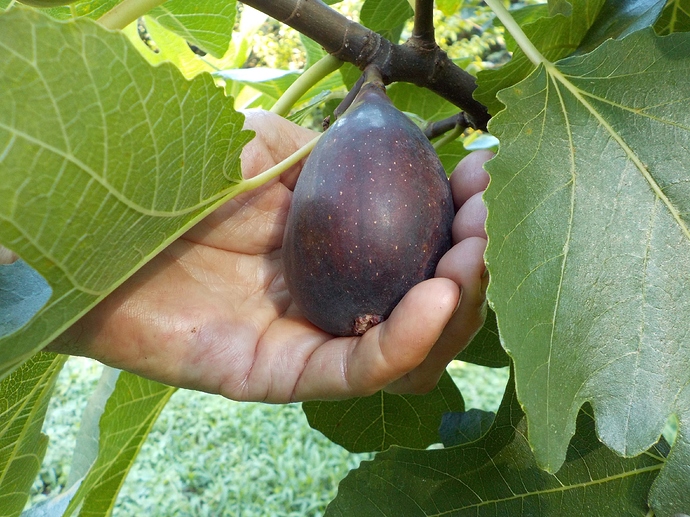 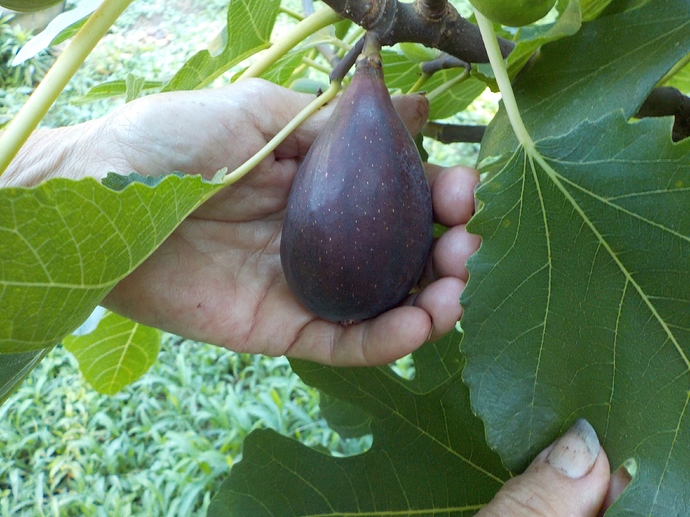 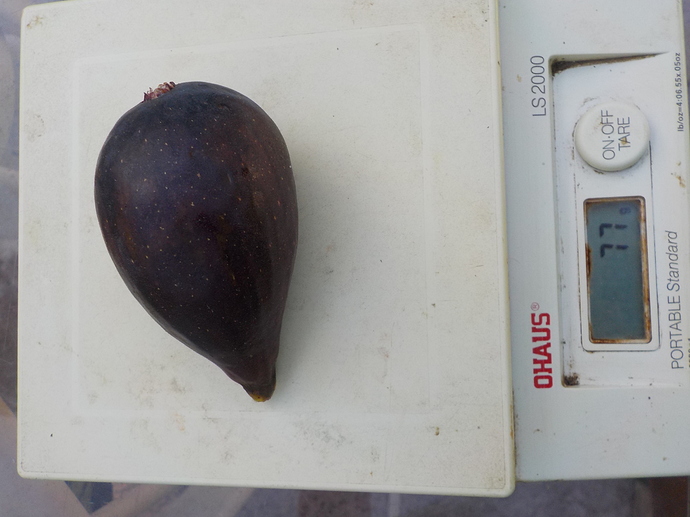 Not everything is happy to grow here, but figs seem to be.

Wow, that’s huge compared to the breba I get.

Nice handful, bet it was tasty!

That is a huge fig. Could you cut into half and show the inside, please?

Holy cow that is a monster! The piddley little figs on my Chicago hardy don’t get ugh bigger than a quarter.

I will try to do that in the morning when I have sunlight, mamuang. I didn’t eat it tonight, even though I wanted to. I was already full from dinner, and I thought it deserved to be savored on its own when I was actually hungry.

If it comes out being anything like the Brown Turkey brebas I’ve been eating, it will be wonderful because those are the best figs I’ve ever had. They’ve been huge, too, with a thick, almost creamy texture - very filling and satisfying.

ARE YOU KIDDING ME?!?! That is a GIANT. Very impressive. I may have to check snopes.com on this because you must have photo-shopped that thing!!! (kidding, of course, but it is a prize winning fig!)

That comment made me laugh! The only ‘photo-shopping’ I did to that was to use Paint to reduce the pixels and convert it to jpeg.

haha. I hope you know I wasn’t really accusing you of doctoring the photo, and while you probably know snopes.com, if you don’t it is the site many people go to when they see things on the internet that are hard to believe and want to find out if its true. Snopes does research on such things and reports if they are “true” or “false” and then gives a little research information to prove why they rated it true or false. So, a fig like that- especially a Breba- would deserve such research.

Don’t worry. Everyone knows Snopes. I took it in the spirit in which it was intended, as a creative and humorous compliment. Did you notice I’d given you a “Like” for that?

I’m lucky to have a camera to back up some of my claims now.

I figured as much, and I did see the like…but I just wanted to be certain you didn’t think I was actually saying I thought you’d faked that photo! ha. Nice to know that next time I decide to give you a tongue in cheek hard time about something I won’t have to include a paragraph of disclaimers and explanations. I’ll just accuse you of some kind of trickery and know you’ve got enough sense of humor and thick skin and internet knowledge to know I’m kidding! 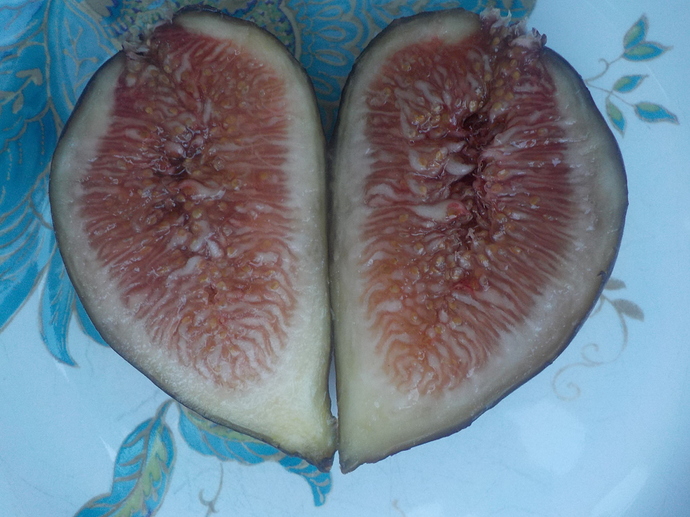 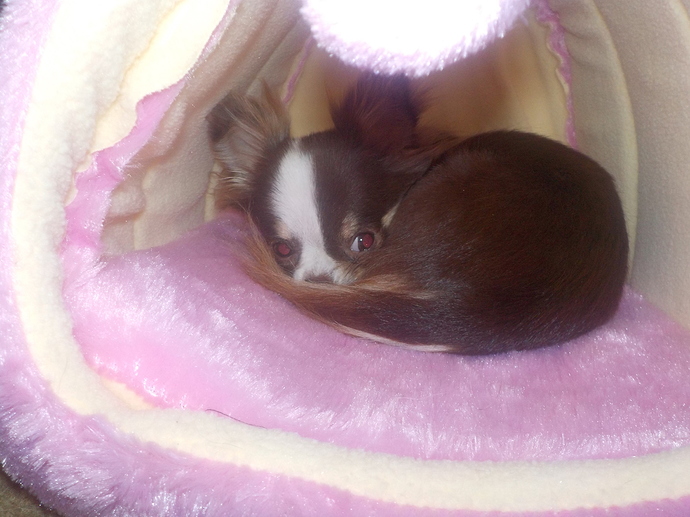 Yes, that cat bed is hers. At three years old, she’s maintaining her 2 and half pound figure.

The Black Mission breba fig was juicier and seemed less complex to me than the Brown Turkey ones, which were creamier. It had crunchy little seeds. To be fair, we had a good rain while the Mission fig was ripening. However, I ate an over-ripe, falling apart, BT breba straight from the tree this evening; even though the inside was absolutely gooey from the stage of over-ripeness, the flavor was still more complex and nuanced. The BT contained floral components with overtones of ripe banana.

Fig enthusiasts may chortle at my tastes, but mature Brown Turkey trees can produce excellent (to me) figs under the right conditions. The princess is sitting behind me, barking her agreement.

Muddy,
It looked good. Thanks for the review, tooI only ate a couple of varieties so I like hearing what others say about the taste of their figs.

By the way, your dog is a few pounds lighter than “my” groundhog. It showed up last weekend, fat as ever.

I don’t usually go in for the fu-fu/Paris Hilton type dogs, but that little guy is just hellacute! Great photo. AS for the fig photo, I’m pretty sure its a fake.

I’ve only tasted 5 fig varieties but for me Brown Turkey is the BEST. Like you said, fig fanatics always seem to put it down as “ordinary” but I love them so much I now have 9 of them!

OMG that is a HUGE Mission fig! And, BT gets a bad rap, but there is a particular cultivar of BT that is actually excellent. I have one, and it is as good as any other fig I’ve got going, including RdB, VdB and Panache, which are all really excellent cultivars here in my area. My BT is very “figgy”, and I like that a lot about it. And your little pup is adorable.

Nice size fig. So how did it taste?

Johnny, I described the taste in the post with the cut open fig and little dog.

By the way, your dog is a few pounds lighter than “my” groundhog.

that little guy is just hellacute!

And your little pup is adorable.

Squirrels are bigger than that little princess, to say nothing of groundhogs! She is the smallest adult dog I’ve ever met. Chihuahuas have always been a type of dog that I did not particularly like. I’ve always thought of them as annoying, skittish, cowardly, yappy, ankle biters. Besides that, I wanted something a bit bigger. Needless to say, I did not seek this one out. She adopted me.

When my son and his family were staying here they brought their dog. The first day they were here, she latched on to me and became upset if we were separated. She’s been my owner ever since. Her personality isn’t anything like the chihuahuas I was familiar with. She’s friendly and loves people, and weasels her way into everyone’s heart who meets her, especially men and children.