I recently decided to add some blueberries to my garden project. One of the varieties I decided on due to some posts I saw here was Ka-Bluey, despite Gurney’s having a mixed reputation, since they are the only commercial source (ARS turned down my request for some cuttings).

They sent them earlier than scheduled last week, probably because there were a couple warm days. One of the two plants has some dead lower growth (definitely dead, as there were some snapped twigs both live and dead in the box, and these were brown inside unlike the two small live parts that snapped), as well as discoloration of the lower branches. The other has the brown discoloration at the base that seems to be beginning to spread up one of the smaller stems. I know as the wood ages on many plants it changes color, but from what I see, it should be more towards a gray and not reddish brown.

Could this be phytophthora?

Some documents out there say it can cause discoloration at the “crown” but I can’t find any good pictures of examples of this, mostly of what the roots look like. In hindsight the roots visible in the plugs (they advertise as bare root, but they are pretty much a potted plant with a bag on the root ball) did seem rather red, but I didn’t have a baseline on what to go on for “proper” coloration. They are temporarily planted in some containers that are now frozen so it will be a little while until I can dig them up again to examine the roots

More photos here, since I can only upload 1: Imgur: The magic of the Internet

Any insight is appreciated. 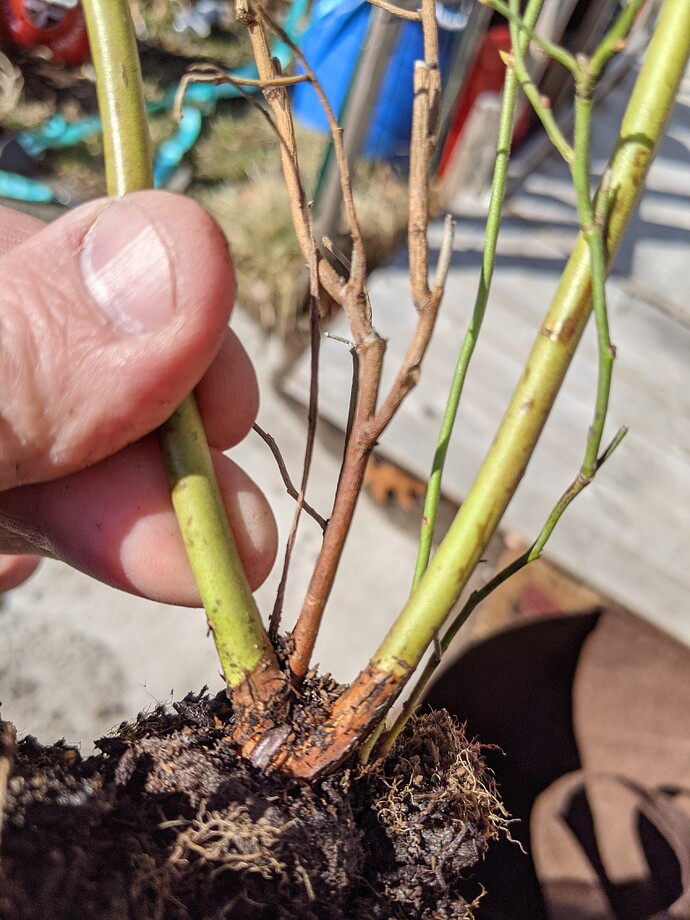 Being that low is difficult to get light to, as-well. I think Carlin is exactly right.

That’s actually what my first thought was, but of course the first google search led me to an article that mentioned phytophthora, and just as when searching google with symptoms if you are sick, the mind always goes to the worst case scenario.

Thanks to both of you for calming my fears!