Anyone know them?
Anyone grow them?

I just got some seed in the mail yesterday and I’m going to plant them this weekend. (I don’t know why they waited until this late in the year to release the seeds, but I just got the notification seeds were available on Monday) I don’t know if it’s too late in the season to get them to ripen (they say it’s 85 days), but I figured it’s worth a try.

They’re supposed to be an old South Carolina variety that was nearly lost to history and has a fantastic taste.

Here’s some info on the history: 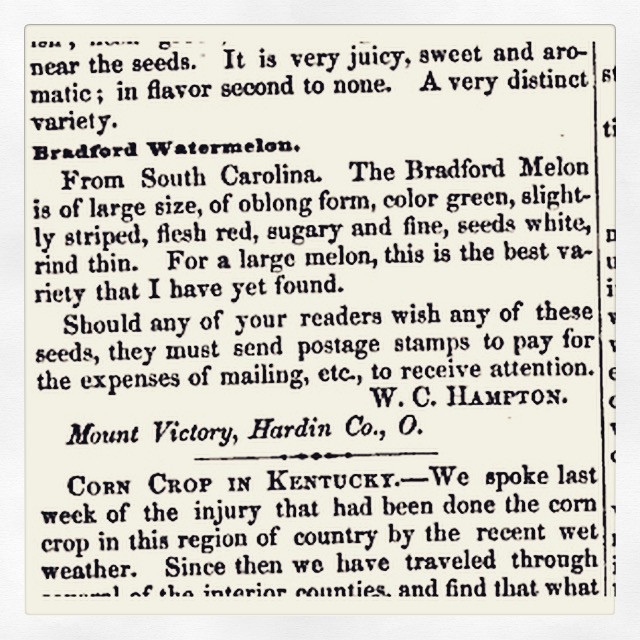 Here’s a little more history and an excerpt: 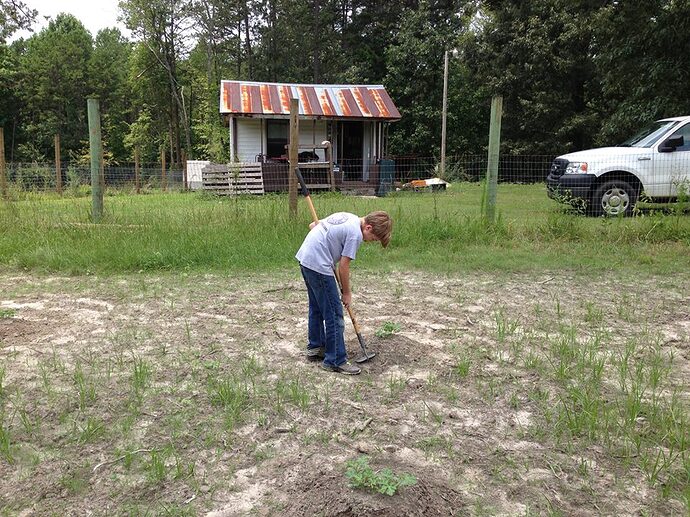 My Great granddaddy “Chief” Bradford was born with the green gene, with a real knack for mixing, tinkering, and improving the crops on his farm. His passion, though, was for his “Bradford” watermelons, known far and wide as the sweetest and most...

“My Great granddaddy “Chief” Bradford was born with the green gene, with a real knack for mixing, tinkering, and improving the crops on his farm. His passion, though, was for his “Bradford” watermelons, known far and wide as the sweetest and most flavorful around. It was the finest watermelon for making pickled rind, too, spoon tender right down to its dark green skin. It was this tender skin, undoubtedly, that made it nigh impossible to ship, and so it never roamed far from our family fields. He always planted the Bradford late and had developed in them strength to fend off the diseases that tend to plague the cucurbit family at the end of the summer. Everyone else was out of melons by the time his started coming in, so if you wanted a watermelon you had to see Chief.” 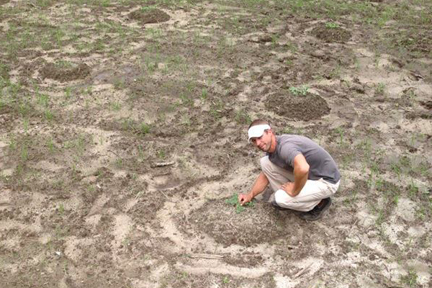 I’m curious about the watermelon brandy

Hey Bart- I’ve followed this watermelon with some interest ever since I heard a story about it on National Public Radio. I tried to order some seeds- over priced as they are- but they were sold out early this spring when I was ordering seeds. Later on they had them in stock but it was too late for me this year.

I will tell you this. I’ve read some reviews by other melon growers around the net that said this all a bunch of hype and very clever marketing, but that the melons just aren’t anything special when you try them. Even the NPR story said something about the BRIX (I think that is where I saw the brix) and while I’ve forgotten the exact number, I remember thinking it was just about average for watermelons.

But certainly it is interesting, and I’ll undoubtedly be trying them out next year. Here is a link to the NPR story, and it has some information about how to find the Bradfords website which has more info and sells seeds. 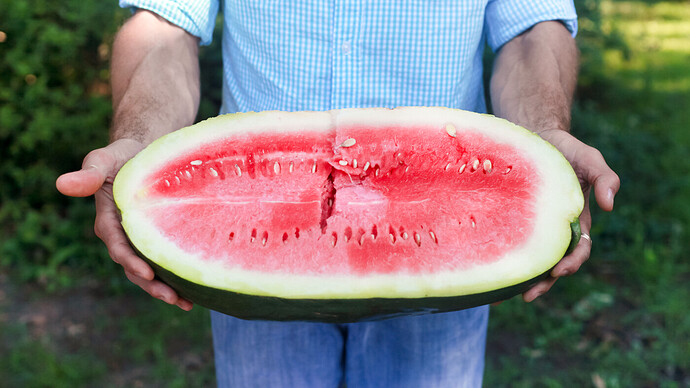 Saving The Sweetest Watermelon The South Has Ever Known

The Bradford boasted sweet flesh so coveted, 19th-century growers turned to guns and poison to thwart thieves. The melon all but vanished by the 1920s. Now a descendant of its creator is reviving it.

There was a thread on this last year. I think @Kate and maybe some others ordered some seeds then. I haven’t tried that melon, and don’t know how good it is, but it sure did get some widespread good PR.

I will tell you this. I’ve read some reviews by other melon growers around the net that said this all a bunch of hype and very clever marketing, but that the melons just aren’t anything special when you try them. Even the NPR story said something about the BRIX (I think that is where I saw the brix) and while I’ve forgotten the exact number, I remember thinking it was just about average for watermelons.

I had a similar thought about hype and PR and also not measuring up to the sweetness of a modern melon.

One of the links I posted above has the Brix listed as “well beyond 9%”. That’s not bad, but there’s plenty on this list that exceed 10%, including Orangeglo at 10.7% (which is being discussed in another thread).

I have one plant in my patch of mostly New Orchid and Sorbet, New Orchid really impressed me last year so Bradford will need to be very sweet to even compete.

In the link provided, the article states the watermelon’s brix was 12.5. So, pretty sweet. I think more than just being sweet, all of the melon was used, and it was used in many different ways. The rinds, because they were so soft, could be pickled. And, it seemed to have a high enough brix for distilling into brandy. I might try to grow it and see how it does here in my warm, but much drier climate. Gotta find a spot where it can really spread. The only area I really have is impossible to protect from varmints, so going to try to grow a couple of plants on my backyard slope. Hoping they don’t choke out my artichokes.

Patty S, I like your idea of watermelon brandy! There were two old brothers around here that used to make the best watermelon wine I ever tasted. I grow watermelons every few years, and need to try a new variety. I’ve saved seeds and grown the old reliable “Moon and Stars” for years, it’s dependable and a beautiful vine, dark green leaves with yellow “moons” just like the melons, but the seediest melon I’ve ever seen. Often so seedy that the only way to eat it was to just cut out the heart. As badly as as I need to learn to graft, my next project may be wine making.

n the link provided, the article states the watermelon’s brix was 12.5. So, pretty sweet. I

Thanks for that observation Patty.

Hype. I grew these in 2015. They are an average or maybe slightly better than average tasting watermelon. Sweetness also seemed average. Unfortunately they also have soft flesh rather than crisp flesh and since I prefer crisp flesh watermelons I will not be growing them again. Almost as soon as these melons ripen the flesh starts turning to mush. I think they have the shortest picking window of any watermelon I have ever grown. If under-ripe they are not really edible but once they ripen you have about a week to pick them. After that they turn to mush. I suspect that is why people quit growing these watermelons. The rind did not seem particularly weak and none of mine cracked, unlike Orangeglo which can crack for no reason at all. And speaking of Orangeglo, it’s much much better than Bradford. Bradford does not compare to any of the really good watermelons. I am bringing this up today because I read a seed catalog this morning that was spreading more hype about these watermelons. But if you like soft mushy watermelons with average taste and a short picking window, these could be your dream melon.

I REALLY appreciated the information you just provided about the Bradford watermelon. As you can see from earlier in this thread, I’ve long been curious about it and a little suspicious of whether it really is as special as its hype would suggest. And it sounds like my suspicions were correct- it isn’t light years ahead of all other melons based on your review. But wow…you have to hand it to the Bradford family- they absolutely conducted the most successful marketing campaign I’d ever seen. From the nostalgic story about its origins and tracking it back down after it almost disappeared, to calling it “the sweetest watermelon the South has even known”, to using it in several expensive products. I haven’t seen so much publicity about any type of fruit or vegetable lately. SO it’s peaked my interest, making your post very helpful to myself and others.

BTW, its nice to see another big fan of Orangeglo. Myself and fellow watermelon fanatic @rayrose (BTW, where you been, Ray?) often sing its praises, though we both concede its tendency to spit.

It was an amazing ad campaign and it was largely repeated in the seed catalog I was reading.

I’m curious- what catalog has them for sale? Last time I checked on them the only place I could find them for sale was on a site ran by the Bradford Family and it was like $1 per seed!

I don’t recall. I have a pile of at least 10 new gardening catalogs. If I have some time I will try to find them.

I just ran across this thread. I’ll confirm castanea’s report. I, too, grew these in 2015 and, if anything, found them less palatable than he did. The flesh was very soft, melting even, which wasn’t really an issue for me, but they were not very sweet. In fact, it were easily the poorest flavored watermelon I grew that year out of five varieties. Crimson Gold, Orangeglo, Mountain Sweet and one I can’t recall right now were all vastly superior.

Unless this melon is much happier in the hot humid environment of it’s origins than it is in hot, dry environments like mine and castanea’s, it is, indeed, likely a product of great marketing. Anybody want to buy my remaining six or seven seeds for $10.00?

You know, we really should reach out to some of the publications/media (I’m thinking of NPR, especially) who did these big stories about this watermelon as if it was a proven fact that they were some great, rediscovered watermelon that was 100 times better than anything else. They ought to be held accountable for running those stories as if they were journalistically vetted and factual. If they are just going to serve as the marketing arm of the family selling these things then they should at least be told that they were wrong. They should be asked why they didn’t do some Brix testing rather than taking the word of the people who stood to profit from their free commercials!

The above is pretty much the opposite of my experience growing Bradford watermelons this year. They are more variable than I anticipated and do have several flaws. They would not hold up compared to highly selected commercial watermelons today. Many of the Bradford watermelons had white streaks through the pink flesh. The rind is thicker than normal and bred so that it does not split. Overall flavor ranged from good to very good to excellent. Two of the Bradford watermelons I ate this year would have classed in the top 5 watermelons I’ve ever eaten. They are distinctly vigorous continuing to make melons for about 2 months. IMO, growing conditions make a world of difference with watermelon flavor. I grew them in sandy loam that has not grown watermelons in at least 40 years. Castanea is correct that they have a relatively short window to pick at perfect ripeness.

Here is what I posted in the current watermelon thread:

Here are some pics of the Bradford melons to give a rough idea what they look like. The average weight ranges between 20 and 45 pounds with most around 32 pounds. They have some tendency to sunburn as is typical of dark green melons. Internal structure often includes white streaks which are edible and taste about the same as the rest of the melon. Flavor ranges from good to very good. I don’t have a refractometer, but would rate these to brix about 13 to 14 which is very high for a waterme…