Just how mature does the bud stick have to be? I’d like to take buds from this year’s growth but the wood is still quite green and flexible, with the axial buds very evident.

Hi Mark,
I have been using a lot of green scions this summer, starting about mid August. Try to use those axil buds closest to the beginning on this years growth, they do not need to be mature, but large enough that you can see them clearly. Also as you go up the bud stick you may see some feather like outgrowth instead of buds, I am not sure yet but think those may be beginning of flower buds, so do not rely on those. I limit my scion to only 3 vigorous buds so that less stress is placed on the graft union healing. Also I shade all grafts now with tin foil to keep the sun off them, only allowing some indirect light until they leaf out, then I remove the shades. Otherwise you can do most any kind of graft you wish to use now until about early Sep. I expect beyond mid-Sep the scions May take, but not actually break bud til spring.
Good luck,
Dennis
Kent, wa

Thanks, Dennis. That covers it nicely.

I forgot to add that I leave some naked green scion above the top bud of the scion which gives you a bit more stored energy to support all 3 buds until the graft union is formed and the rootstock can flow nutrients into the new scion.
Dennis

Mark
This is one of my recent green scion plum grafts onto an interstem of Adara where I am top working an old sweet cherry tree this summer. Most of my interstems were grafted last spring. This one grafted on 7/31 just beginning to grow so I have a good 45 days of growing season for it to prosper. At this point I visit frequently to trim back its competition with other interstem growth
Will probably remove shade once full leaves are out
Dennis 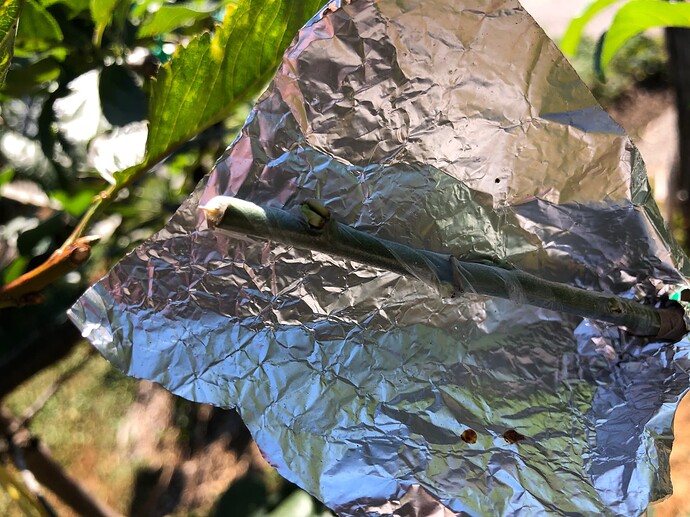 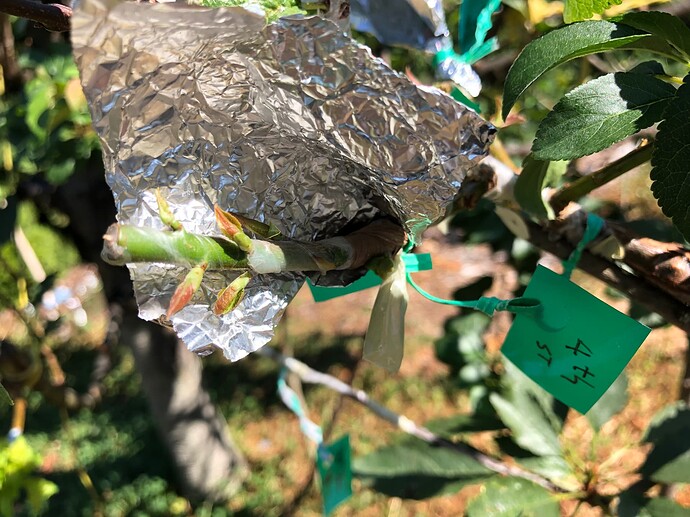 Yes Mark, cut your green scions very early in am, quickly remove all leaves on budstick and wrap in a wet paper towel until you graft. If you cannot use them the day you cut them, keep in refrigerator until you can graft, then be sure to cut off the bottom 1/2” of each scion just before you use it to assure it had not begun to oxidize. Other than those small points graft as you usually would in any method you are best at

I did some green wood scion grafting last year Sept 22nd. Peach grafts didn’t survive as expected but a plum graft and autumn olive did.

Mark,
As I irrigated my trees yesterday, I thought that this may actually be the most important prerequisite to a successful summer graft. We do not usually think about watering in springtime for dormant grafting but if your region is suffering the summer drought like we have, don’t forget to make sure you are keeping an adequate water supply during those critical first three week after a graft.
Good luck
Dennis

We’ve been dry for weeks now, and run the sprinklers nightly for an hour on each zone. (We’re on a well for irrigation so it’s not ruining us to keep things watered.) I’ll probably play around with it a little bit this evening, taking buds and chipping them at once on the targets. I also need to prune back a plum to get new growth on it next summer so I can do the same thing to it.

Thanks for sharing your experience -might save me some mistakes!

This past week a tree fell onto one of my prize new wildgoose plum trees and did some damage. Once I had the debris cleared I began to work up the broken branches into scions for summer grafting, I was lucky that the tree itself was saved, but having kept it well irrigated the scions I made are now springing out in several places. This summer I am topworking my 3, 25 year old sweet cherry trees. There were probably about 25-30 places where I had my cherry plum and Adara interstems growing form last year’s preparatory work, so in a way the summer grafting probably accelerates the conversion by a full growing season. I’m a big believer in green wood grafting. It’s actually much easier than dormant, since the rootstock and the scion wood is very soft and doesn’t need as much pressure.
Dennis