Yes, I know that we could just build one.

We’ve used an old pallet for our compost for years, but the hubs would like something a bit NICER looking. LOL

Looked at composters online and there are varying reviews.

I don’t want one of those tumbling type. I want something that sits on the ground.

Ya’ll have anything that you’ve loved? Thanks!!

I have had good luck with the Allgreen composter from Amazon. It has proven resistant to racoons and rodents and was reasonably priced. It looks like the price went up $50 or so since I purchased it. The only drawback is that you have to remove the entire lid to access it, it doesn’t have a flip lid like some other models have, but I think this adds to the racoon resistance. Allgreen Composter on Amazon

Check to see if your county has a compost program too, they sometimes give out free composters. Now they don’t look great either, but it’s free. I plan to get one myself. I currently use something similar to fruit fanatic. It works well

I liked this tumbler the best. I know you said no tumblers, but it went fast and had no snakes. That’s a biiig deal here, and why I am always the person adding compost material. This has a handle to turn it, you don’t have to use body weight. 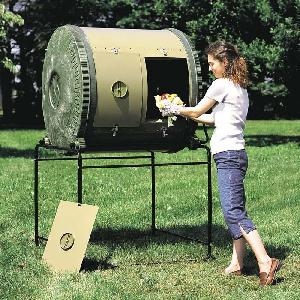 I think this is a Mantis like I have gotten- but I wanted a small picture of what I went for. A friend had this, I think her kids semi-destroyed it, and ended up eventually repurposing for soil mixing. I think the problem was the composter wasn’t screwed together well enough for abuse. I don’t have the issue. Something like a HotFrog or CompostWizard is on-ground, actually on a tumble platform on-ground. I like the raised bin, so I can empty into a wheelbarrow or sled.
If you are not going for a tumbler- go for something that can be filled, and then, in-progress compost moved and turned between bins. Otherwise, you don’t get breakdown. Even with a tumbler, I need two. One filling, one turning, then dumped out into an aging bin to rot down more.
I have/have used many kinds- could not mix well while filling most of them. Even with the balls ended up using a metal compost mixer, a stick with ‘wings’ that pop open as you pull it out. Anything on open ground got snake eggs, BioOrb did too, raised tumblers did not. We have copperheads as well as black snakes, so no-go.
Ejwox tumbler from Amazon- same as tumblers from Lee Valley or elsewhere- had two doors though and somewhat more fragile. Worked fine, had to pull with body to mix. Two compartments
Geobin- just a big plastic sheet that you connect into a tube and fill. I repurposed these, but they worked as well as pallets in a three bin system.
Earth Machine- top was hard to remove, but stayed on; separate though, kept getting caught by wind while I put stuff in. The compost removal door at the bottom keeps coming off. This was what the county was selling cheaply at the time, I have several I now use for chips and aging compost.
BioOrb- a big ball, tumble by turning ball across yard, with top that supposedly comes off easily but mostly that falls in or off when you move ball. Too hard to move or tumble when full, compost doesn’t mix well unless you can manage to tumble several times. I use to age final compost, or store wood chips.
ComposSpin similar to bio_orb but with ‘sticks’ inside that help mix compost. Not any better, and since it was more pieces it eventually fell apart.
I have DIY barrels, if you google they are similar to anything commercial.