Can you graft sour cherry to sweet cherry?

It’s probably a dumb question, but I have no experience with sour cherries. I have a Lapins sweet cherry that isn’t performing well here, and I would like to top work it with something.

Yes, it can be done. Should be an easy take. In fact, sour cherry is often grafted to Mazzard as a rootstock, and Mazzard is basically just a strain of Prunus avium, which is sweet cherry.

Here is an example of Sumadinka → Royal Rainier from @Marta 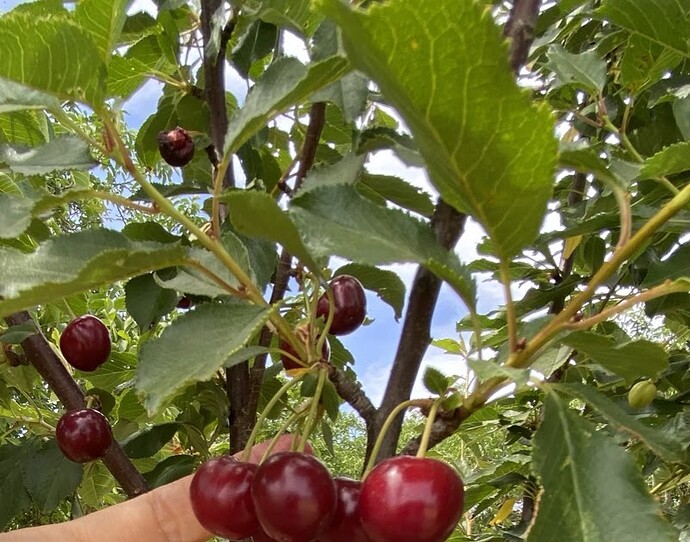 I have morello grafted to a volunteer sweet cherry seedling. It’s doing well in spite of morning shade from the larger seedling and forest to its East.

They graft easily onto Mahaleb, and grow well. Not sure if Mazzard is a good option, as I lost a number of potted trees grafted onto Mazzard a year ago. Could be another reasons for this, but I also had the trees on Mahaleb in pots for a year, and I don’t remember any losses. Fruiting in the mild winters areas is another issue, and I don’t really have the data yet on most of my cultivars under testing here in the Central Valley. Sumadinka has fruited well for me, but I had a lot of chill hours (probably close to 1000). All my trees are still too young to draw any conclusions, and I am in the process of moving them from one location to another. This move takes the evaluation back for a couple of years, as I had to prune them heavily before the move.

FWIW, I have grafted Sumadinka and Belle Magnifique to my Stella. The scions are likely from Marta and Andy distributed in the CRFG exchange. I think @JamesN has also grafted them in his So. Cal orchard. Both of our experiences should give some insight into their performance in 300-600 chill hour range.

how about a sweet to a sour cherry? Kristen and a few others are z4 hardy. i have monty, Juliet, Romeo, carmine jewel and lutowaka rose.

Kristen is not self fertile though. I have read the reason the romance series is all sour cherry parents is because they don’t readily cross with each other if at all. That was something brought up on one of my threads. I asked about sweet cherries that do well with the cold on here. People brought up black gold which is self fertile but only hardy to zone 5 but has more cold hardy characteristics and Kristin. Then Kristin’s being not self fertile came up.

ive read that monty will pollinate most sweet cherry as it blooms for a long time. it also grows big like a sweet so the graft is more compatible than with the bush cherry varieties. found a publication earlier from Serbia where they did comparisons of different root stocks they grafted 1 cultivar of sweet cherry on. they had all the types of sour cherry, and the commonly used sweet cherry rootstock. they grafted a European sweet cultivar to all of them. in the trials the sour cherry rootstocks produced bigger cherries than the commonly used sweet rootstock. i was surprised to hear that as everything else ive read said they werent long term compatible. they said the grafted sour cherry rootstock helped control the size of the tree without harming production because the cherries were bigger than grown on typical sweet cherry rootstocks. i should have saved the link.

However P. colt
is a rootstock that is used for both sour and sweet cherry. And itself is a cross between
P.avium and P. pseudocerasus where avium 2n=16 and pseudocerasus is 2n=32
I think colt is a triploid.

Colt seems to have excellent compatibility with both sweet and sour cherries.

I think sweet cherry hybridized with P. fruticosa and stabilized into the seperate species P. cerasus.

So it’s not strange they seem to have good graft compatibility. 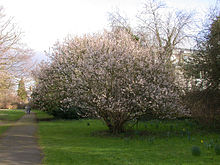 Prunus pseudocerasus or Prunus pseudo-cerasus, the Chinese sour cherry or just Chinese cherry, is a species of cherry native to China and is used worldwide as an ornamental for its early spring cherry blossoms. The fruits of some cultivars are edible. A small bushy tree growing to at most 8 m, it generally has reddish buds, pale pink 2 cm flowers and typical red (if a bit pale) 1.5 cm cherries. It can be distinguished from its congeners by certain traits; its 7-16 cm leaves are broadly obovat... 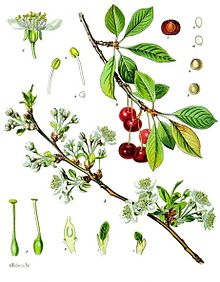 Prunus cerasus (sour cherry, tart cherry, or dwarf cherry) is a species of Prunus in the subgenus Cerasus (cherries), native to much of Europe and southwest Asia. It is closely related to the sweet cherry (Prunus avium), but has a fruit that is more acidic. Its sour pulp is edible. The tree is smaller than the sweet cherry (growing to a height of 4–10 m), has twiggy branches, and its crimson-to-near-black cherries are borne upon shorter stalks. There are two main varieties (groups of cultivars... 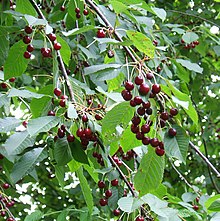 Prunus avium, commonly called wild cherry, sweet cherry, gean, or bird cherry is a species of cherry, a flowering plant in the rose family, Rosaceae. It is native to Europe, Anatolia, Maghreb, and Western Asia, from the British Isles south to Morocco and Tunisia, north to the Trondheimsfjord region in Norway and east to the Caucasus and northern Iran, with a small isolated population in the western Himalaya. The species is widely cultivated in other regions and has become nat Prunus avium has ...

https://www.researchgate.net/publication/339145008_Nuclear_DNA_content_and_phenotypic_traits_of_the_Prunus_rootstocks_from_Poland’s_gene_resourcesPrunus_genties_poskiepiu_is_Lenkijos_genetiniu_istekliu_branduolio_DNR_kiekis_ir_fenotipiniai_pozymiai
might also be an interesting source. Although i’f not fully read it (yet).

I realize Wiki is not considered a “perfect” source. But it gives a good starting point / overview. That’s why i still linked it.

hmm… i click on the link i found with the same address through google it comes up but the exact same address typed here says its not found. try typing it in a google search. it will come up.

add 15 Tijana narandzic is the study.