a lot of talk here that carmine is more tart than the other romance cherries, but how tart is tart? Also that it is tart raw but less so cooked–because it gets more sugar or because some of the acidity actually dissipates?

Is carmine more sour than a typical Montmorency? Do you have to sweeten with more sugar in a pie than Montmorency?

Tempted to do a romance bush for wine and stuff, curious if I should get something other than carmine jewel though and Burnt Ridge only has CJ…

I’ve had it once many years ago along side others. It tasted plenty sweet to me. God bless.

For what its worth, I got a Gurney’s catalog today, and they’re selling a CJ for $19.99, and Romeo and Juliet plants for $22.49. Everything in the catalog is half price until March 7.

Some folks on here have bought Romance Series cherries like these from this company and have had mixed results. So, they might be alright.

Honeyberrusa sells all these RS plants as well as Crimson Passion which is supposed to be the sweetest of all of them. I planted this and the R and J bushes last year, so obviously no fruit yet.

@clarkinks could maybe answer your question regarding CJ and Montmorency comparisons.

Regarding the taste differences between the various Romance Series plants, I think @Don3a and @IowaJer could comment.

Carmine Jewel is a wonderful sour cherry. I grow it because it’s the best or one of the best of those Canadian cherries. It’s highly productive and superior quality to montmorency for juice. Montmorency is larger so if your going to make pie montmorency is superior for pitting. Carmine jewell has a much richer deeper flavor and dark black cherries. CJ will take awhile to produce large quantities but eventually it will and like montmorency it really produces! CJ has a very tiny pit so any plans to mechanically pit them can be abandoned. I like to juice them pit in and that works out perfect! I would highly recommend it for juice only. Steam juicers work best. CJ is a very sour cherry but I can drink the juice in small quantities unsweetened whereas montmorency is not for that. Montmorency is king of pie cherries. CJ are to small to be great pie cherries and the flesh pit ratio is to great.

Regarding the taste differences between the various Romance Series plants, I think @Don3a and @IowaJer could comment.

Hey Dude, Haven’t logged on in awhile but your post triggered an email to me so thought I’d weigh in.

I’ve previously described the after-taste of Carmine Jewel out of hand as kinda like that feeling in your mouth when you’ve had a sip of a very dry wine. On the other hand, I think Montmorency can be a very tolerable cherry to eat out of hand if left long enough on the tree. I truly think it subjective though. I also think aromatics play a role, and CJ lacks that, compared to Monty, or ER styles.

For what it’s worth, my wife uses less sugar when making pies with CJ than she does when making pies with Early Richmond, or Montmorency. She also prefers CJ to all other tart cherries in just about any application from pies to jams. I’m on the opposite side of the fence on that, as I think there is no finer cherry on the planet for pie, or jam than my favored Early Richmond.

But the U of S bush cherries have a lot going for them, and Clark is right when he says they’re a cherry machine and are a pain to pit.

Thanks for the replies, I knew I could count on the GF net!

Can anyone who’s bought any RS cherries from Gurney’s comment on their size and quality?

The Romance series cherries have more sugar than the other tart cherries, but it is still a tart cherry. I’m hoping Juliet with it’s larger berry is easier to pit. My plant is still small. Carmine Jewel has a great flavor, I was hooked right away. Taking the pits out is tough, one drawback for sure.

Can anyone who’s bought any RS cherries from Gurney’s comment on their size and quality?

I had some small ones, and some large ones. Quality of the plants was top rate, no chance of it dying no matter what the size, healthy looking things! Things change with time though. I got one for 7 bucks, what a deal! A very nice plant too. I gave away all but one of Juliet and Carmine Jewel. All i need.

Bought mine RS from Henry Fields(Gurney’s). They were jumbos!

My plants came from gurneys. Gurneys imported them into the U.S…

My Juliet looks great after the first year. It’s about 3-4ft tall now, and about 2ft wide. But it was a big plant with huge roots when I got it from HB. My Romeo was much smaller and put on a little growth, maybe 2ft tall, but skinny. My CP was a 8in twig when I got it and now it’s about twice that high with some new shoots.

I actually think my Juliet might be big enough to give me a few cherries this year, but maybe not. If it does the fruit may not be the best.

I’ve heard really great things about Juliet in the last year or two. Several people have advised I add it to my orchard. Please let us know how yours does.

I have high hopes for Juliet, mine is too young and I’ll know more in the 2019 season.
It’s about 2 feet tall. No one so far has been able to shut me up, so i will comment on it when it grows out.

I pit Juliet just fine, there were a few that were too small but not enough to worry about. These were from a u-pick. 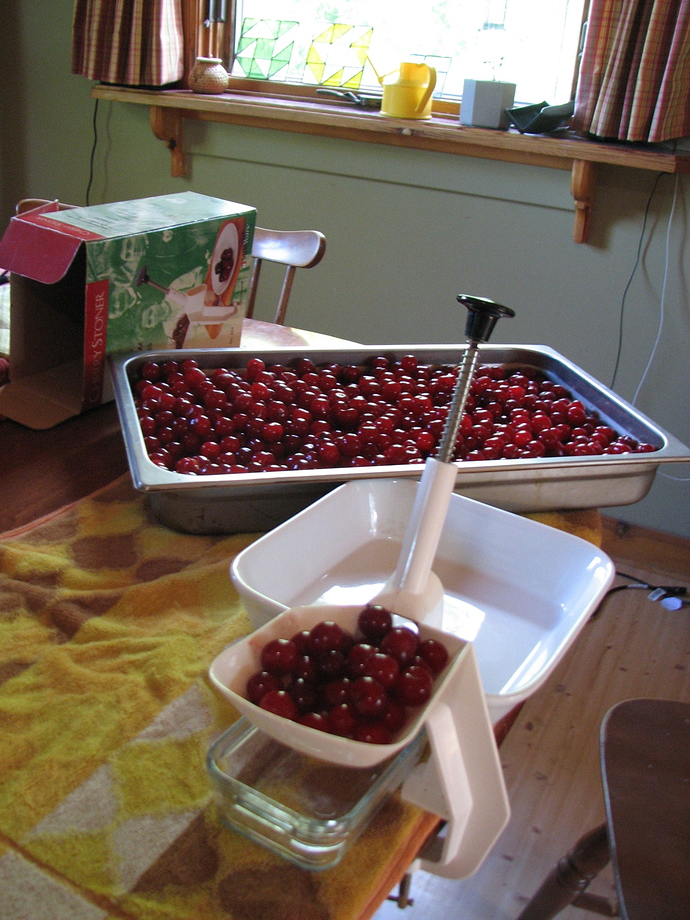 Wow, those look great! Man I’m getting ansi now for spring. Strawberries to open the season followed by Honeyberries, and raspberries, then the cherries, and it will be only June at that time… Can’t wait! I also have White Gold Sweet. The tree is mature, I should get a huge crop.

I actually think my Juliet might be big enough to give me a few cherries this year, but maybe not.

I have high hopes that my Juliet’s will fruit this year too. Mine were in ground 4/12/16 as little 8" twigs, but much like CJ, they really grow fast, and last summer one of the two had a few blossoms at least. They aborted, but it was a good sign anyway. (Especially when you contrast that with my two CP’s that were both in ground on 4/16/14. They’re much larger/fuller and yet I’ve not seen a single blossom, and in fact last year they had issues even pushing leaves and have been a pretty big let-down to me… I think the CJ’s spoiled me though

That there is real good to know! Never having seen a Juliet cherry I had only the intel from Dr Bors description, and he did say that Juliet had a large enough pit to use the old fashion crank pitters on.

Bernis from HBUSA had sent me a YouTube vid of a U-Pick they’d visited in Canada where they were pitting U of Sk cherries with a plunger type like is in your picture. She said they placed the cherries in the freezer for awhile first to let them get pretty firm (but not frozen of course) and that that seemed to really help in the pitting operation. So I tried that on my CJ’s and it was an unmitigated disaster… still too small of a pit.

Real good to know they work pretty good on Juliet.

bought the 3ft. size of carmine jewel and juliet from HB. cant wait to get them planted and growing!

Lol! I froze them, let them thaw and just squeezed the pit out. it was messy as hell but went fast. It may work better without freezing, I had to freeze because I didn’t have the time when harvested, I was leaving town.

last summer one of the two had a few blossoms at least. They aborted, but it was a good sign anyway

My CJ did the same thing, then the next year exploded. I’m expecting Juliet to abort flowers this year and produce next year. Which is fine I have CJ, White Gold, and Glacier that will give me cherries next season if all goes well.

how big do they need to be to fruit. i think the ones i ordered are 3 yr old trees.

how big do they need to be to fruit. i think the ones i ordered are 3 yr old trees.

Part of it is establishing. Age can be deceptive. It sounds big enough if you plant next spring it should fruit next year. Fruiting may be sporadic. It will explode 2 years from now. I lost a year on mine because it was in a bad spot, and didn’t grow, when I moved it it took off, but still lost a year for sure.

Don’t get too antsy. I planted my first carmine jewels in fall of 2009. Since then I have planted the other three kinds available over several years. Some bloom profusely, but I’ve eaten exactly four cherries from about 20 bushes. Several are 5 feet tall or more. They are in two locations 13 miles apart. I think the frost may have gotten them at least one year. The scant cherries fell off even when netted. Eventually they should explode, like my strawberries did. I got overwhelmed by strawberries a few years! Maybe 2018 is the magic number!