Carmine Jewel - My Take Away (With Pics)

My 2016 CJ harvest is in the books - and to borrow a line from Kevin Bacon from the movie A Few Good Men - “…These are the facts of the case - They are not in dispute”.

I had initially deluded myself into thinking I could get this on my own, but they went nuts this year and were just loaded. We had a windy storm come through one night and in the morning when I saw a bunch of cherries on the ground I thought I best recruit some help, I’m just not going to get it done between the weather and the Japanese Beatles starting to show up!

So…, after taking 14 gallons myself, and still drowning in cherries, I finally blasted out a plea to friends and family and they came in droves. I essentially said come and get it, I don’t care if you take one, two, or five gallons, I just want them gone!

Total take from the five bushes was 33 gallons.

And there are maybe 2-3 gallons still on the bushes that were difficult for even the adults to get to, and now the Japanese Beatles are all over them. So I’m leaving them where they are and may hit them with Sevin tomorrow.

There’s probably a few gallons on the ground from the wind as well.

So we finally got the yield that’s been advertised, but despite the very hot and dry ripening season we just never attained the 15-17 brix they talk about. In fact the last I tested were 11-11.5.

VERY glad this is behind me!

Here’s an early example picture, although the outside colors are off a bit you can still get a feel for the fruit load potential of these CJ’s. 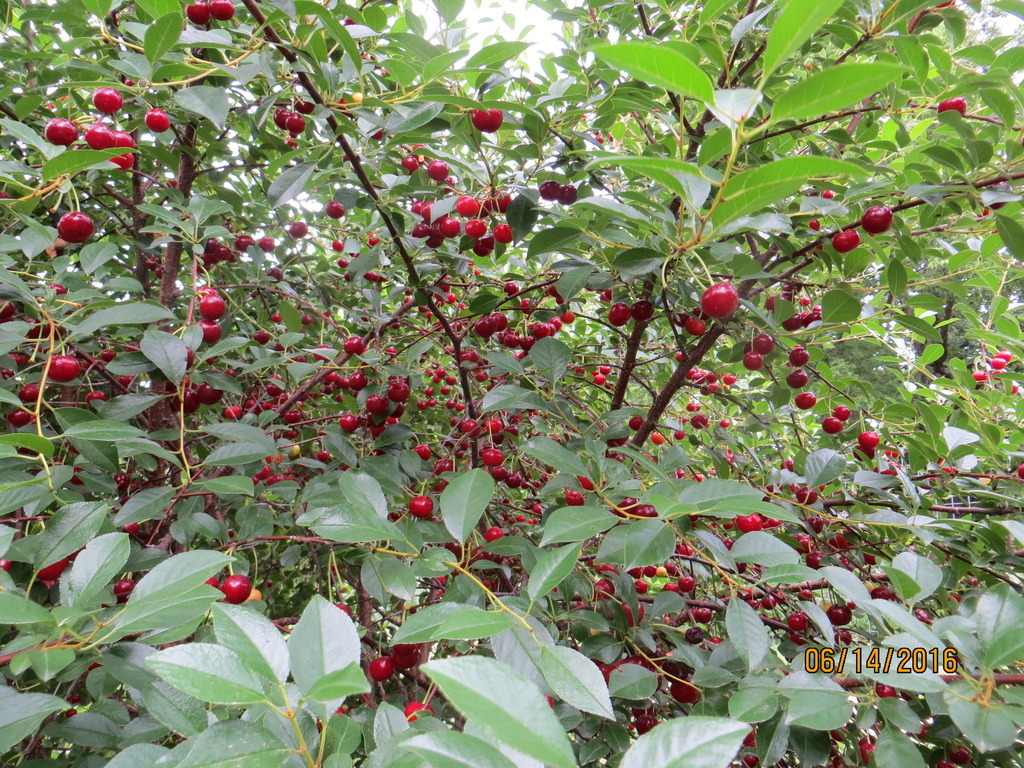 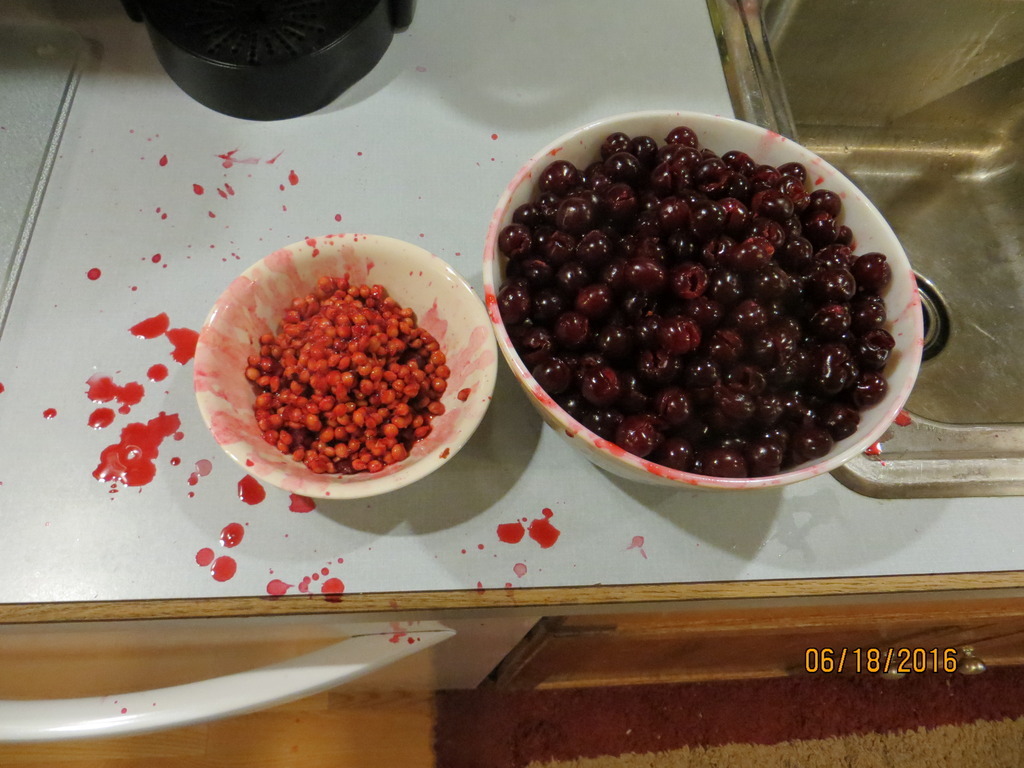 Getting ready for Jam: 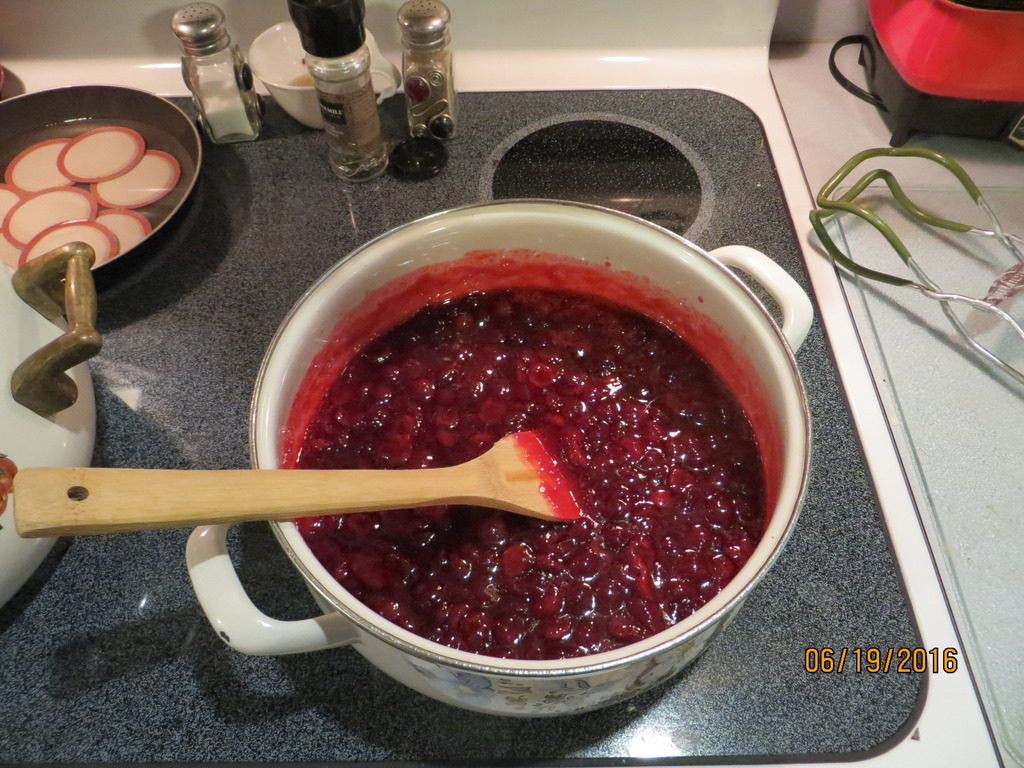 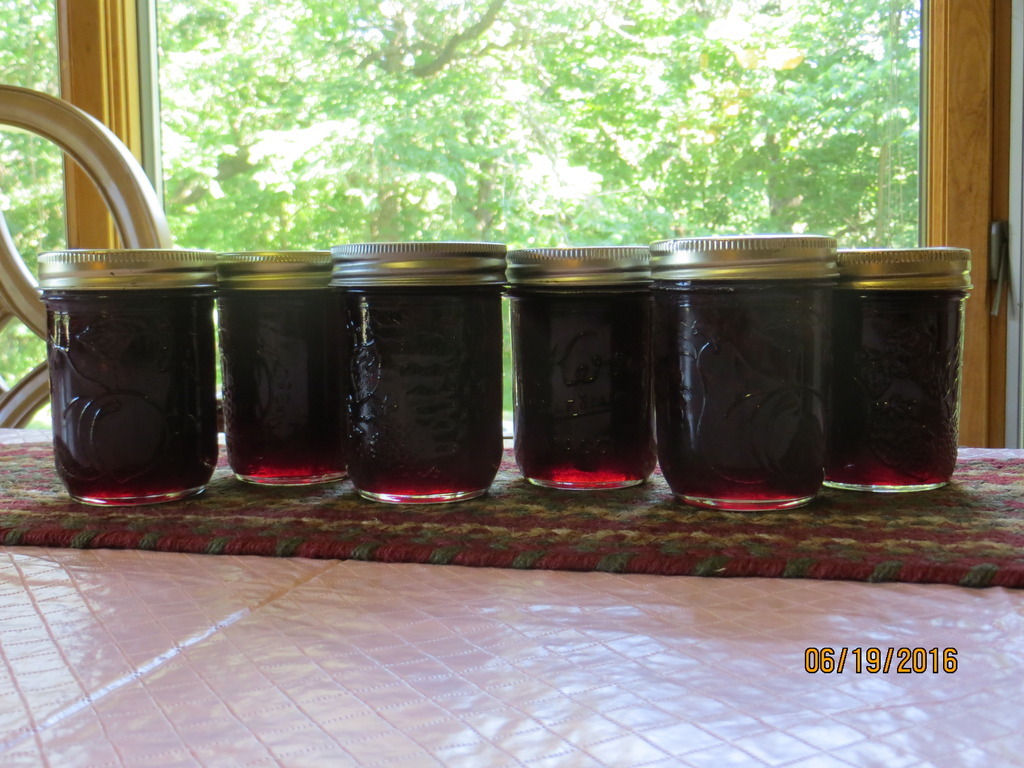 So how would you rate them? I only have the one cj bush and maybe that is a good thing. Any cracking or rot?

Jerry,
Great looking bushes! Can practically taste the jam just looking at it. Your results are almost dead on with mine. I froze the majority pit and all to be dealt with during a slower colder time of the year. Carmine Jewell is very impressive as were your orchardist skills!

Warm; I guess I’m still on the fence a tad. I mean they were advertised as making this amount on a much smaller bush. So now I have these monster bushes that finally met the amounts they talked about, but I cannot imagine a 5-6’ bush doing that number. So, I think I’ll prune a lot more heavily than I did earlier, and just try to keep them at a more manageable size. Maybe sacrificing yield some, but won’t know until I go there…

Cracking and rot (this year) was a non-issue - owing that to the hot dry weather. Very lucky that way this year. Not so much in prior years.

Thanks Clark; I need to have a better plan on a go forward basis - that juicer thing you had looks like a possibility down the line.

Nice haul, it took a village!
How old are your bushes?

Thanks for the great report. Bill

Jerry,
Any of these juicers work but I use the mehu-liisa. If I was buying a juicer now I would stay in the $100 range. Amazon.com

JesseS; Three are on year 6, and two on year 5. Interestingly, one of the bushes that was planted in '12 seemed to have more cherries per square inch than any of the rest. I had a similar feeling last year about the other younger bush.

While picking I recalled reading somewhere in the information on CJ’s from the U of S that if a bush bears heavily one year it may be slightly less heavy the following year, and the very heavy bearer last year was not top dog this year, although like the rest it was still heavy. And yet it’s kinda hard to quantify given the difference from year to year.

Clark had posted in another thread that his seemed to double every year, mine have been consistent in increasing right along but this year was the breakout season for me as well, as last year we took 16 gallons from the 5 bushes -vs- the 33 from this years harvest.

Jerry,
Just for reference this is the link to my post for Carmine Jewell this year Carmine Jewell Cherry Yields increasing with age. As we discussed our results are very similar across the board on yields, suckering, height, years to produce heavy yields, growth habits etc…

Awesome Mine really impressed this year as well. Maybe the only worthwhile purchase I ever made from that Conglomerate of nurseries that carries them.

I just re-read that link Clark - lots of good intel in there for CJ growers.

Been wondering how you came out this year Strudeldog, from those pictures on the other thread I assumed you did alright.

I also harvested my Carmine Jewel. I plan to mix with red currants for jam. I have 2 plants in containers. I need to get them into the ground!

Drew; My daughter mixed CJ’s with Montmorency and brought over a pie for Fathers Day, it was very good, and the contrast of the red and purple cherries was pretty cool.

Reading that other thread and saw you’d planned on dehydrating some, wondering if that happened. I was thinking these would work better than ER or Monty given they’re more firm/less juicy texture. We also talked about that some, but in the heat of the battle we were just trying to stay ahead of the game and never got around to setting up a dehydrator.

Reading that other thread and saw you’d planned on dehydrating some, wondering if that happened.

Unfortunately no, they were small and such, maybe next year. I have peppers and figs I will dehydrate. I decided to go for jam. I think being in pots, they didn’t grow that well. I need to get these trees in the ground. This fall I’m going to try and find a spot. I want to give away one tree, I need to arrange that and get it out of here. For me one tree should be enough

Fantastic. Does the jam taste like sour cherry jam or sweet cherry jam? The color is magnificent. I would like it with toast right now.

This might be a good reason to have the other plants in the series, to at least stagger some of the harvest. Too much at one time can be overwhelming. I put in like 20+ tomato plants one year and i was filling 5 gallon buckets trying to give them away. Cherries would be much easier (to get rid of) i would imagine!

My bush is 4 feet tall or more//it has put on a ton of growth this year.

I was hoping they would be sweeter. How do they compare to say a montmorency or one of the other sours?

mrsg47; I made this jam using a packet and maybe a quarter of the regular Sure-Jell and their instructions call for 4 3/4 cups of sugar. I cut it back to 4 1/4 thinking the extra little bit of Sure-Jell would still allow for a decent set. (I had tried before to cut back on the sugar even more and it just wouldn’t set up for me, the flavor was still good but not a jam consistency). I still think that due to the unreal amount of sugar it calls for, I have to say there is virtually no tartness to the jam. My wife agrees, she says “It’s not tart jam, but it’s good”!

I’ve just now finished pitting some Early Richmond in preparation for more jam, only this time I’m going to use the pink Sure-Jell box that says No Sugar Needed Recipes inside. It calls for 5 cups of cherries and 3 cups of sugar. The ER are MUCH more juicy and I tend to have a time getting it to set, so we shall see. I may try to cut back even more on the sugar as I tend to prefer a tarter cherry jam.

Warm; I might get to see some of the staggering effect maybe next year if my CP’s make cherries. But I feel like we were able to get these harvested just in the nick of time, finishing up as the Japanese Beatles were showing up to wreak havoc!! My fear is that any later ripening fruit may be a challenge, which is why I didn’t put in any Romeo as they’re a later ripening cherry I think.

As far as a comparison to other tarts, I just have never gotten the high brix numbers on my CJ’s although I know others have. We had the perfect ripening weather for the high brix numbers this year according to Dr. Bors, but still we had relatively low numbers. I mean it could not have been drier and highs in the 90’s that were pushing the century mark (I’ve been shading my cucumbers…)

The ER has higher brix numbers and are much sweeter than the CJ’s to everyone who was over here helping me pick the CJ’s this year. When they were all done (one family of 5 picked 8 gallons of CJ’s) they were all standing under the ER tree eating cherries as we visited. The kids just could not eat them fast enough.

I noted in another post (maybe even on GW a few years ago) that if I had to characterize the taste of CJ out of hand, I would have to say it reminds me of dry wine as far as the aftertaste, or dryness felt in my mouth. That may not be a fair description as I’m not a wine drinker but I seem to recall that feeling in my mouth at some point in the past whenever I had tasted a dry wine…

That doesn’t jive with what others have experienced however, as I know many rave about the sweetness (for a tart/sour cherry) of CJ, and I think Drew had noted having gotten some pretty high brix numbers on his CJ’s. So it may come down to it being all local. I don’t know if mine will ever reach a high number if they didn’t this year.

This might be a good reason to have the other plants in the series, to at least stagger some of the harvest.

Unfortunately what I’ve noticed is that the harvest season for cherries is ultra compact. Nothing like you get with peaches, plums, apples, etc. Seems like the entire cherry season is over in 4-5 weeks.

I tasted my first one of 5 cherries from CJ - and got some worries… Though it is sweet enough, sweeter that North Star, in my opinion it lacks that “sour cherry” aroma, it is sweet and has enough acid, but the aroma - this is what i didn’t feel. Though may be it was not completely ripe yet and a bit misshaped, so may be it is not a proper test yet. What do you think, does it have the sour cherry kick?

Interesting that you should mention the lack of aroma. Less than 20 min ago I mentioned that to my wife, even opened up a jar of jam that she had just had on a piece of toast and held it up to her nose and said “You know, I don’t get a cherry smell - what about you”? She agreed, and yet said “But it’s still good jam” further saying that she had given some to her brother and his wife and that they raved about it too.