my carmine jewel and juliet are the same age so i should be able to compare them when they fruit. I’m hoping i get a few next year.

Juliet typically fruit much faster than carmine jewell. Now that we are getting normal heavy spring rains the cherry fruits are growing like weeds!

I grafted Carmine Jewel to my Juliet last year. It sets flower buds this year but its flowers will bloom later than Juliet. You can see that my Juliet is blooming but the CJ graft in the middle has buds that are not yet open. 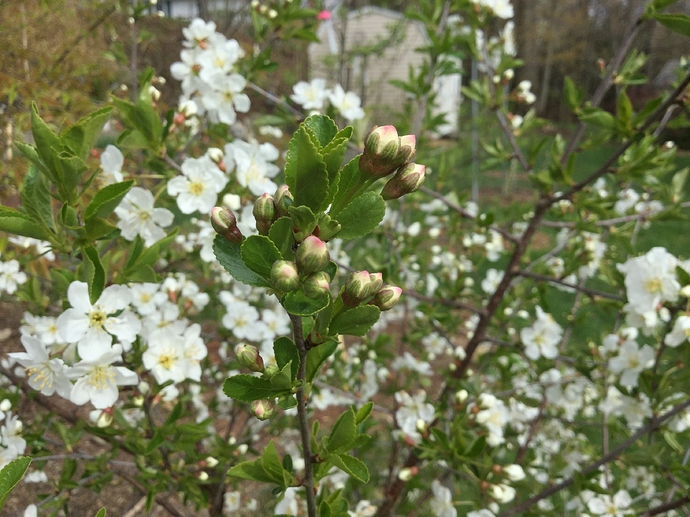 This is our third wettest April since records, and it’s still rainy here. I hope it gets nice for my blooms in the next couple weeks.

@mamuang
Im slightly concerned that Juliet will get nipped by a frost from time to time based on your experiment. That will be a,wonderful cropnof cherries you have!
@Johnnysapples
Your right that extra water will pay off signifigantly in growth for those cherries! I hope you have a bumper crop this year!

Carmine Jewell has handled our fluctuating weather temperatures we have in Kansas with no issues. These little cherry bushes also can handle the bad droughts and storms we frequently have. A week ago we had cracks in the ground (shown below) and fruit still set heavily like any other time 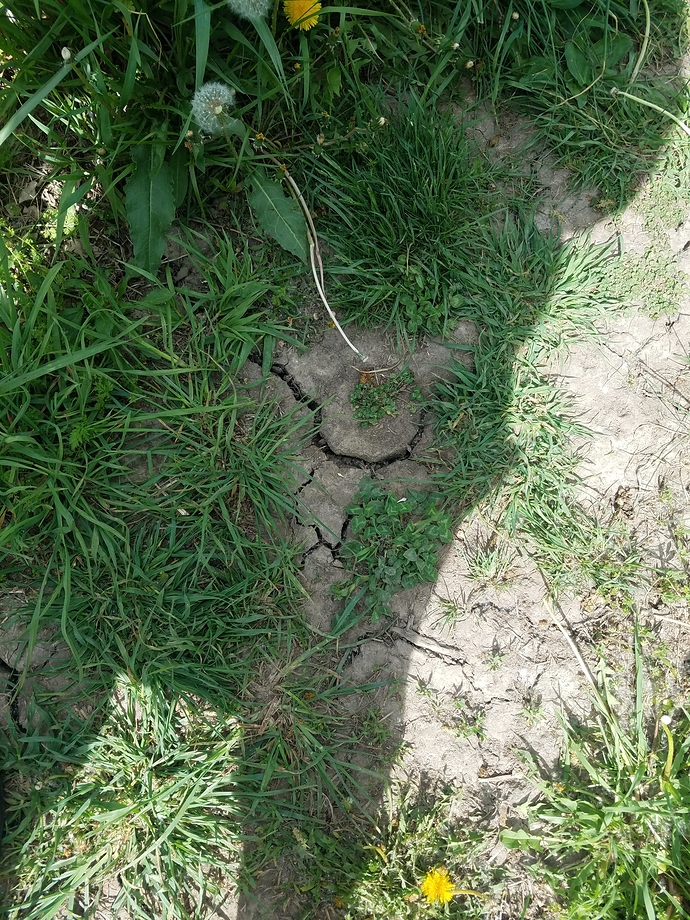 20190427_1053522138×2851 3.49 MB
@mamuang brought up a very important benefit to carmine jewell which was the later bloom time! It doesnt really sink home until you see her bushes in her post above. Clearly if your location is given to late freezes carmine jewell may be a much better choice than Juliet. Juliet has so many other good things going for it Juliet Cherry as do the other cherries from the series My "Romance series" cherries. There had to be at least one other thing that really stands out about carmine jewell and that is color and tartness of fruit! Carmine jewell cherry juice as shown in a post i did above is so rich and packed with nutrients that i feel amazing when i drink it! The carmine jewell also spreads on it’s own and is on its own roots and the list of positives goes on and on! One thing i would caution everyone on is that when its a baby it needs a lot of tlc because its weak and frail until year two or three. If i put it out on its own as a plug in Kansas weather conditions without help it would not survive a month! I use cow manure around it and woodchips and water them as babies to allow it to grow quickly and establish itself. As an adult its like a wild plum in that it is thicket forming profusely suckering and spreading! Yesterday we had 3 inches of rain and the cherries handled it excellent looking better every time i see them! Ive seen other cherries in similar conditions have part of the fruitlets turn yellow and fall off the tree and have a similar response in droughts. The pictures below are taken during the rain and wind storm that is winding down this morning. The pictures taken during the storm give you a better idea how many cherries are actually there! I wish i could take some credit for the excellent condition of the bushes and amazing fruit set ! Certainly i cant take any credit for the bushes it is 100% the excellent genetics of these bushes that were bred to live on the harsh Candian praries that are similar to Kansas weather conditions only much colder in the winter! 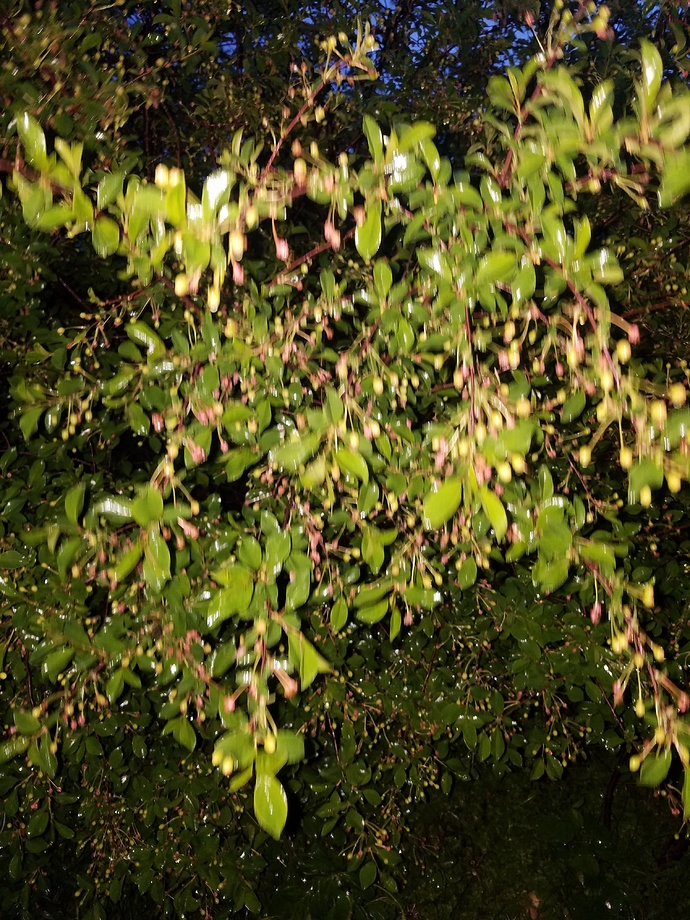 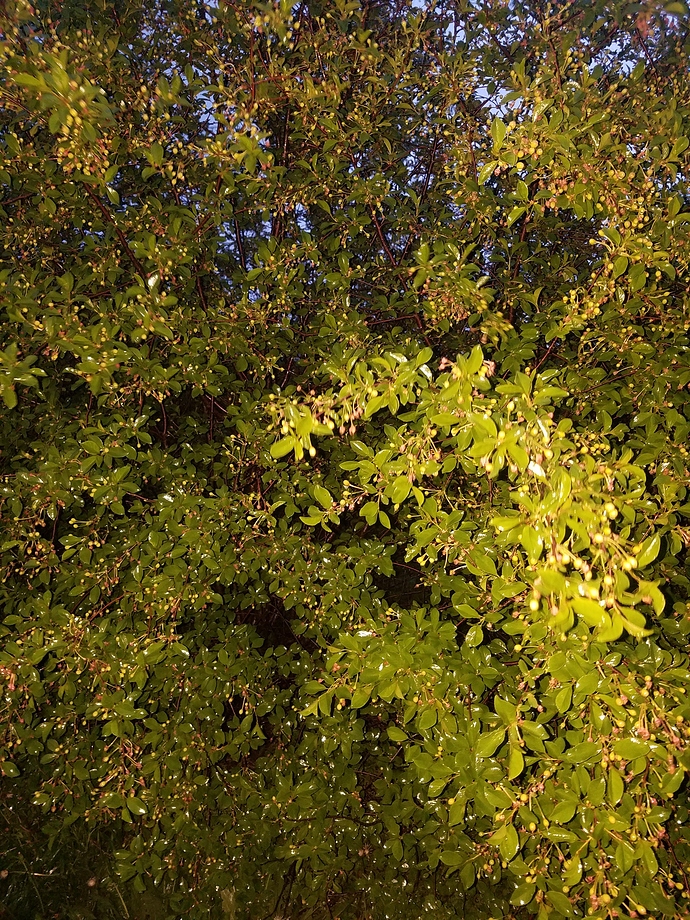 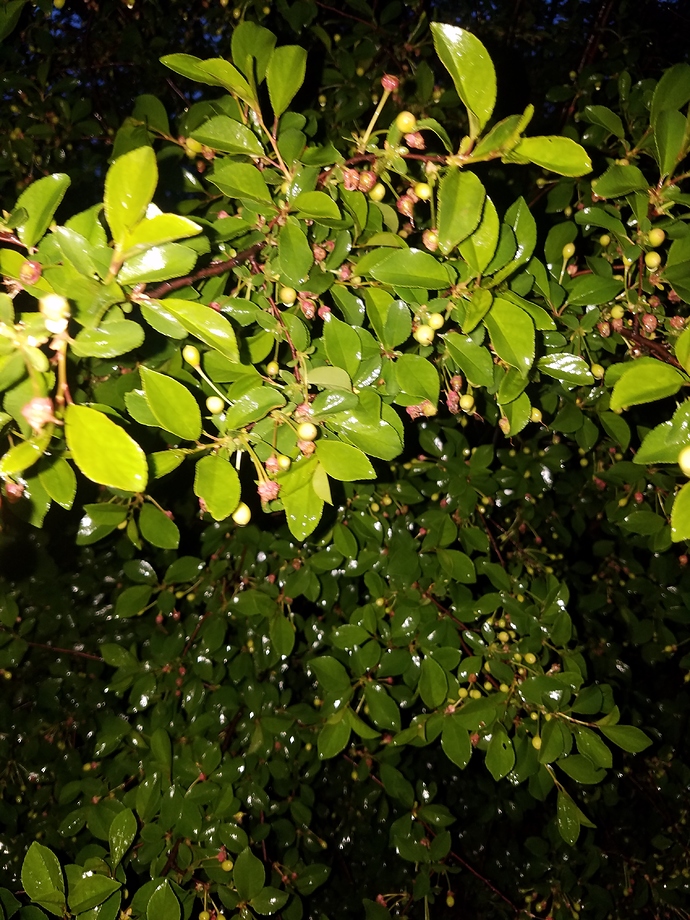 How will you harvest it all? Wow!!!

Good point @mrsg47 i dont know how i will harvest everything yet but that is a very good problem to have!

@IL847
Annie,
Ive got plans to keep them busy with 100 mulberry trees!

A fact sheet mentioned that CJ has 5-6 week picking window, so I put it to the test last year. I picked most of my small crop in the second and third week of July. The test group I left on were fine up to around the third week of August. After hanging for over 5 weeks, they suddenly went from perfect condition to all shriveled up in less than a week. It was even more strange that none of them rotted in the near constant cloudy, wet conditions over the whole time frame. Then again, I don’t have lot of brown rot in the environment. Last year was the first time I ever had unripe plums rot on the tree, which I stopped with Bonide Infuse. Unfortunately, the miserable conditions didn’t allow the cherries to get any sweeter, but the acid did drop off. They were the same brix the whole 5-6 weeks.

I have not experienced any and I certainly have curc in my back yard because they go after my plums like crazy. Maybe they just prefer plums and pass on the cherries?

Well, I have bad news… I just looked today and there are a bunch of PC bites.

I have covered my plums with insect barrier, maybe that is why? Or maybe this is just the year the PC decided to wreck my cherries.

Bushes got good pollination and did not drop a single cherry! The pictures cant show how many cherries are actually there but believe me when i say every inch of these bushes are loaded with fruitlets! Many fruits are on the underside of the leaves. The top pictures i took as close as possible from the side to demonstrate how loaded all the bushes actually are! 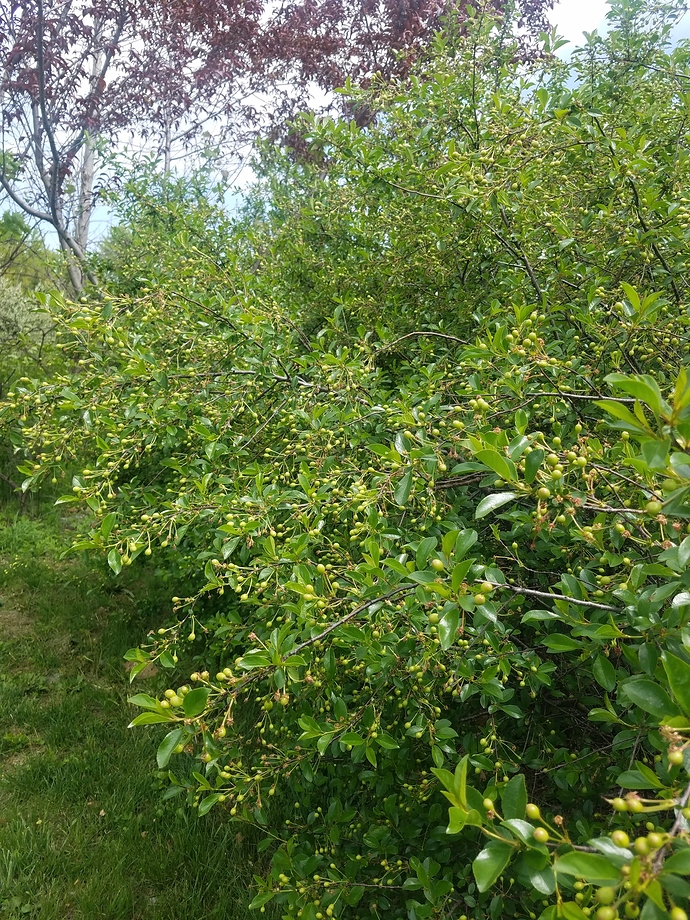 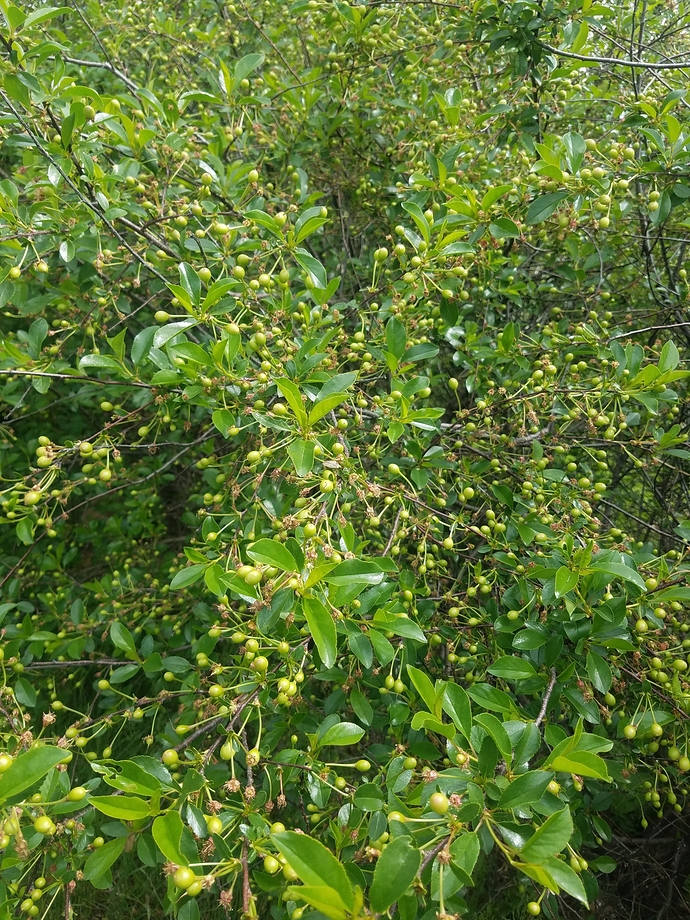 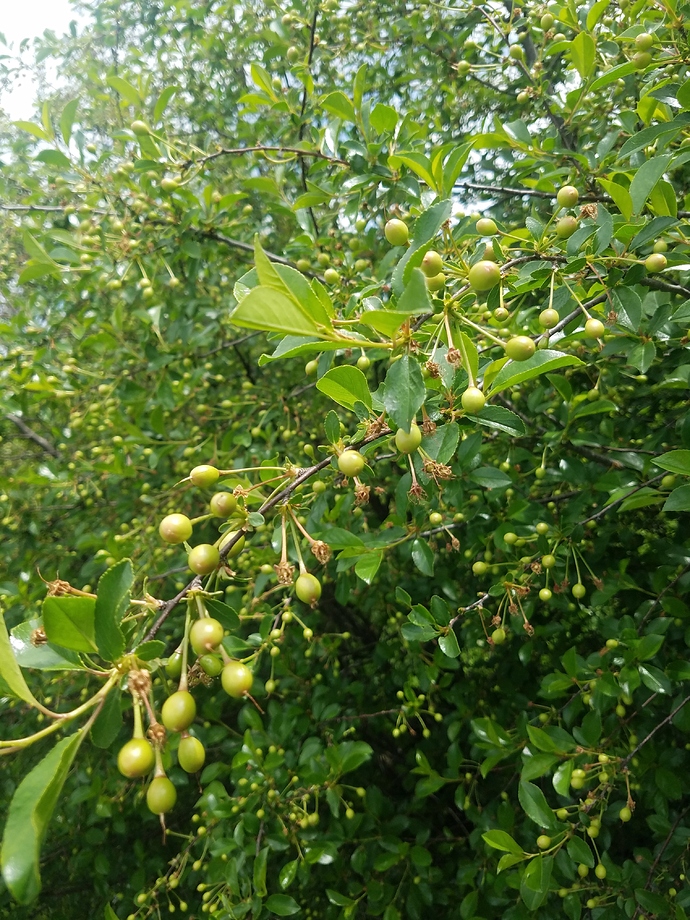 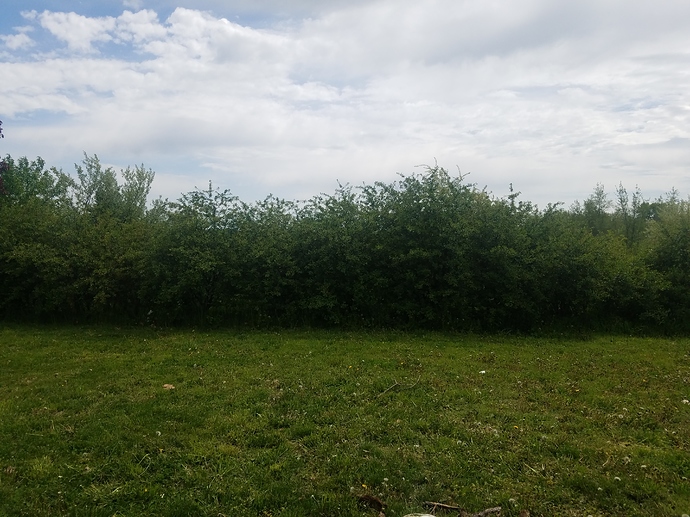 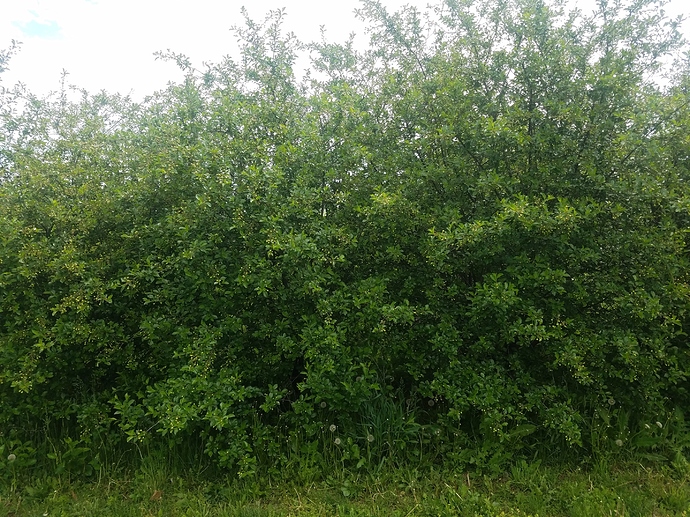 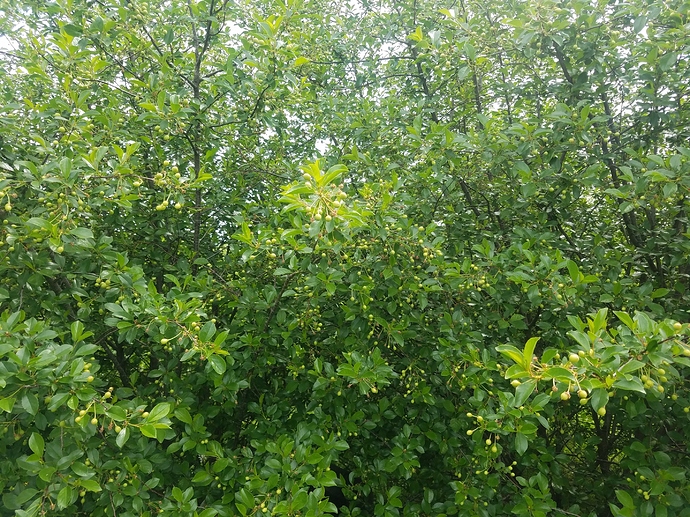 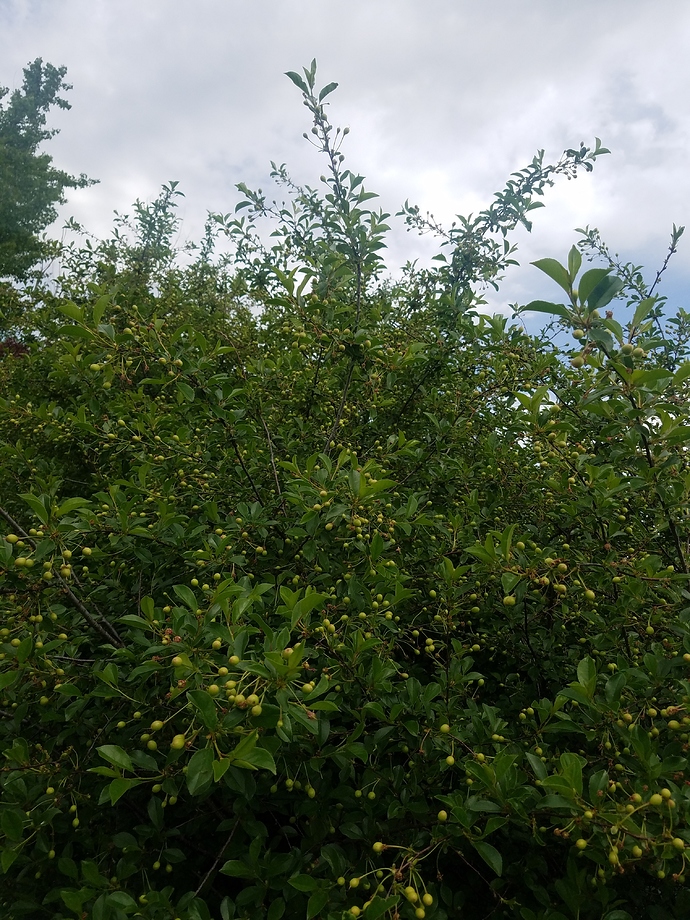 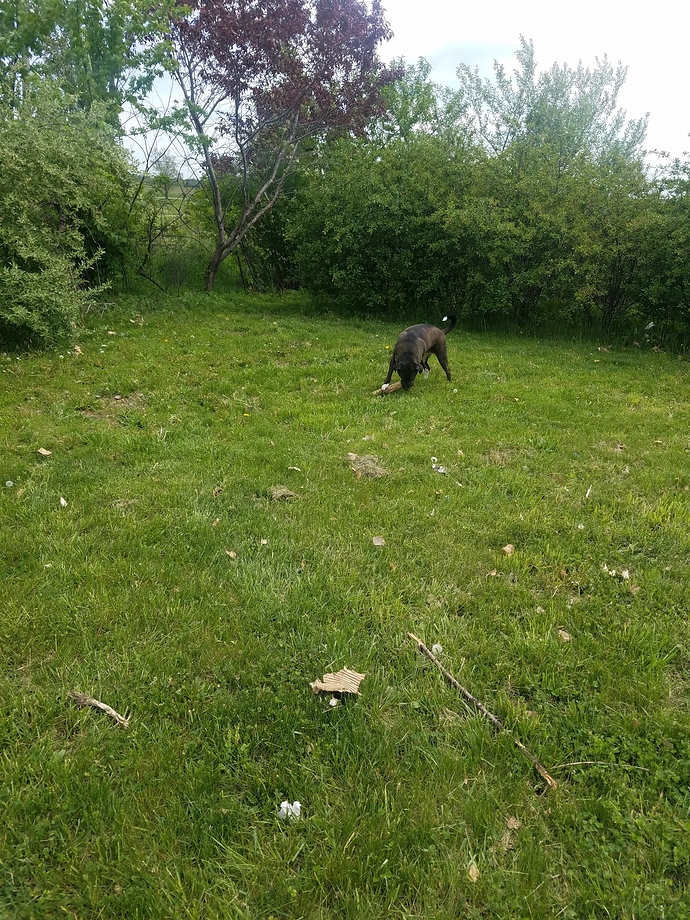 nice heavy set for sure! we really need to come up with a efficient way to stone these cherries, Im wondering if someone could scan one of the old time cherry pitters and modify it slightly and then 3d print something using a hard plastic polymer similar to the original metal ones… Anyone familiar with that kind of tech?

@TheDerek
In large plantings in Canada they are being mechanically pitted and harvested already. Think you would love a couple of articles at this link Unreleased University of Saskatchewan prarie cherries we want & what we know about them contrasted with romance series cherries
" SK Carmine Jewel
Favorite of DNA Gardens! We think of this plant as a little princess - well behaved and beautiful. Combinations of P. cerasus and P. fruiticosa (Sour cherry and Mongolian cherry) Introduction from the Department of Horticulture Science, University of Saskatchewan. Skin and flesh is dark red. Fruit is abut 4 gm with a small round, hard pit. (desirable when using cherry pitting machines or pressing fruit for juice). High flesh to pit ratio. Superior cold hardiness! Self-fruitful in other words cross pollination is not required.

Fruit is exceptional for pies, cooking, juice, wine or flavoring for ice cream or yogurt. Many like to eat the cherries fresh especially towards the end of the season when the tartness mellows! SK is juicier than sweet cherries and has similar sugar levels but additional citric acid makes them tarter. Near the end of the season, fruit can be collected quickly by shaking tree limbs and using a tarp. Season runs from mid-July till the first or second week in August. It has great potential for landscaping in small yards. With glossy leaves and crisp white blooms - train to either a shrub or small tree. Plant a flowering and fruiting hedge. Plant height is 6 to 8 ft (2 m) and has a very low tendency to sucker.

SK Carmine Jewel is one of six new and exciting cherries released from the University. Carmine Jewel will always stand out for its earliness. Its value will remain because its fruit will command top dollar early in the season. As more information is coming in, it appears that Carmine Jewel will be the workhorse of a new cherry industry. It pits mechanically very well and the fruit makes incredible pie and the juice has very good flavour. This is a winner that is not going to disappear!" -Unique Zone 2 Hardy fruit trees like Treasured Red, Black Currant Plants | Elnora, AB"

When the other fruits are not available the pc will go for cherries… now I am having some damage on my cherries which I did not put enough surround on. When it stops raining in a few hours here the cherries will get a spray.

When the other fruits are not available the pc will go for cherries… now I am having some damage on my cherries which I did not put enough surround on. When it stops raining in a few hours here the cherries will get a spray.

I will spray mine today if I can get a chance, rain continues here though…

If the bags work on the plums then I will buy some for my cherries next year.

These are the bags I am using (in several sizes) : https://www.amazon.com/Agfabric-Netting-Insect-Barrier-Garden/dp/B01N5KEHHS/

Some of my Carmine Jewel bushes to date. I planted these as plugs about four years ago. This one has the most flower buds. It’s just over 5’ tall. 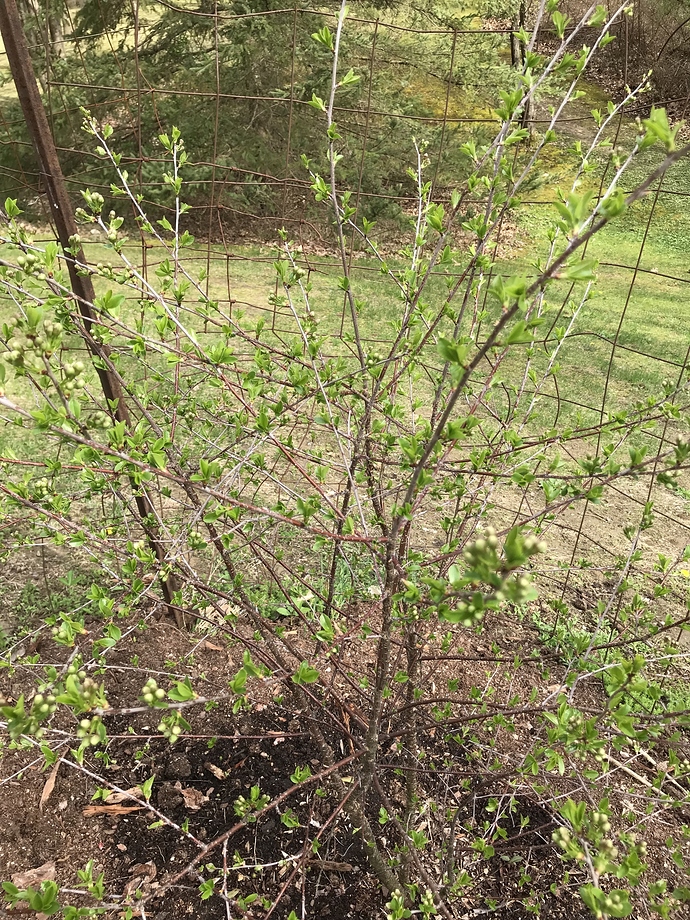 This is the smallest one. I just gave it some bone meal and fish fertilizer. I need to rake it in yet. 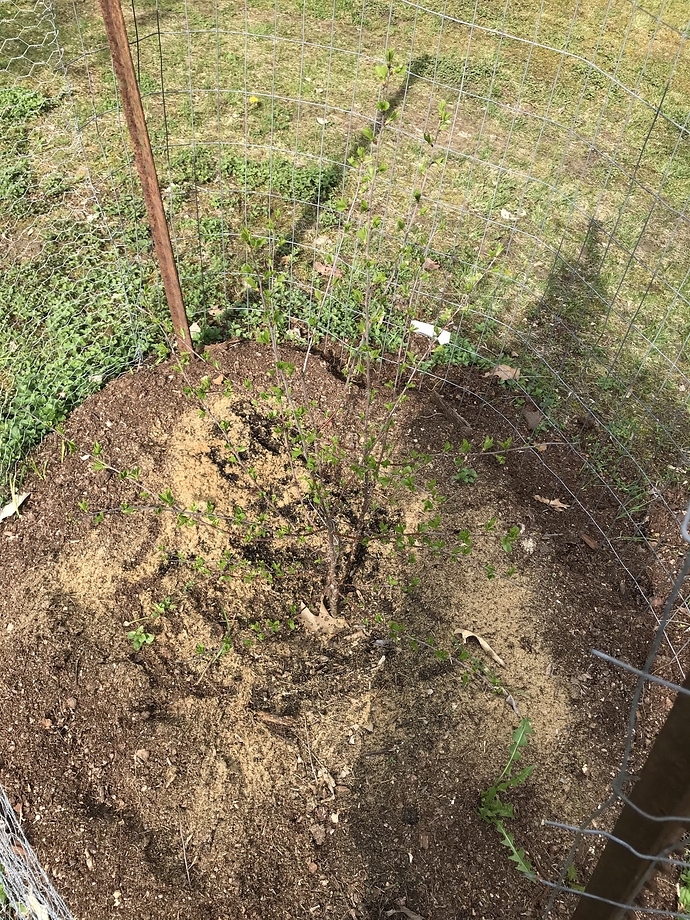 This a shot of Romeo. I still need to widen the cage and feed it. You can see my third CJ in the back. It’s about six foot tall with a few flower buds. I feed that one and widened the cage too. I have three left to feed and widen the cages. I have nine total, plus I planted three at my sisters’ house for her. I have been busy with other stuff too so it’s hard to keep up. 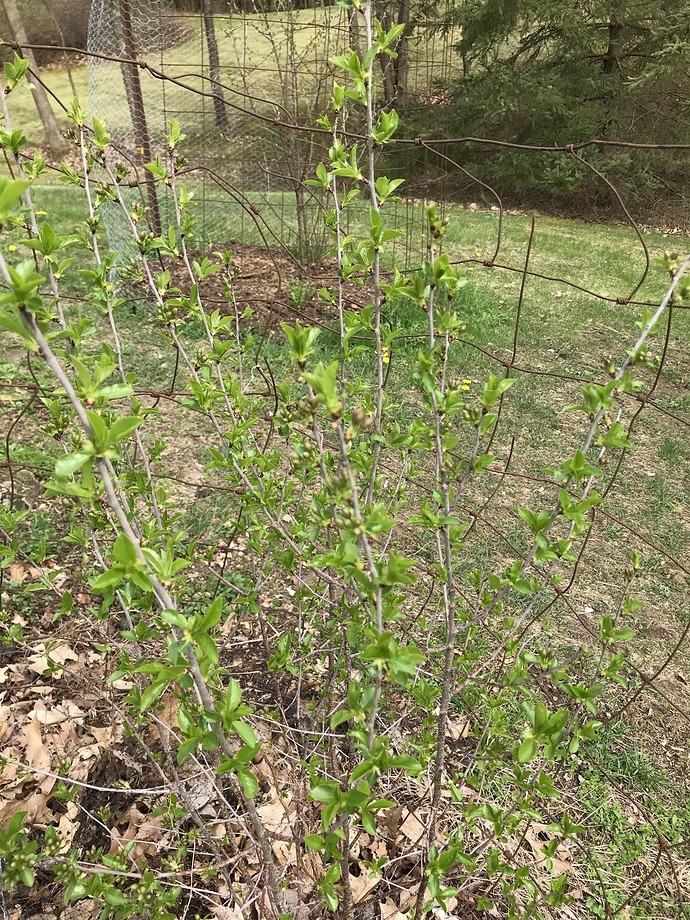 This what they looked like when I planted them in May of 16. This will be their forth year now. They are so small you can’t even see them. There’s six of them. Clark I was just looking at your row of carmine Jewels from 2015. Wow, have they grown!

I got my cherry trees last Saturday at 11:00 AM. I had them planted an hour later. 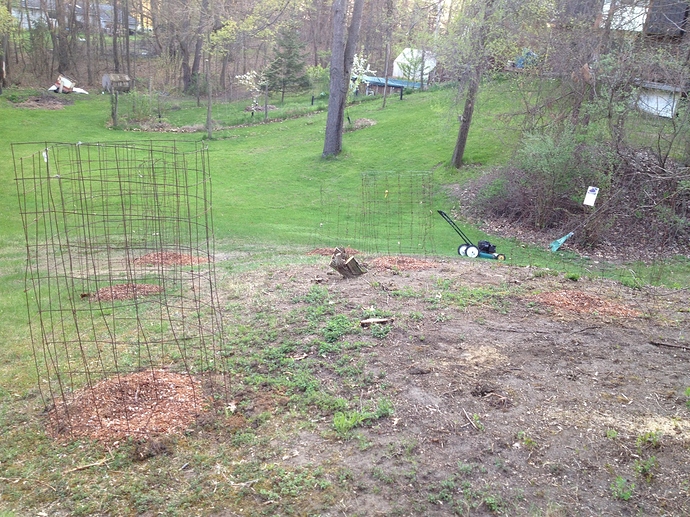 I have three Carmine Jewels on the left. Then on the top right is Juliet, going down in the middle is Romeo, and then Crimsons Passion. In the foreground you can see my Asian pairs and plums flowering. For some reason it doesn’t look like I will get plums again even though I had lots of flowers and tried hand pollinating. I had my holes dug before the trees came from both Rain tree and Honey berry. It goes fast when you just need to berry them! I had remove some nasty Autumn Olive, Honeysuckle, Bittersweet, and wild grape to get these ready.

Here’s the same shot three years latter. I went out in the rain to get it. Raked in the bone meal too. 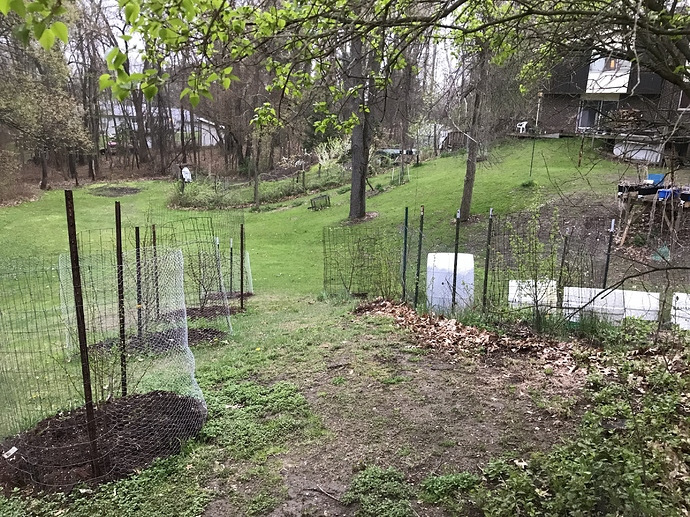 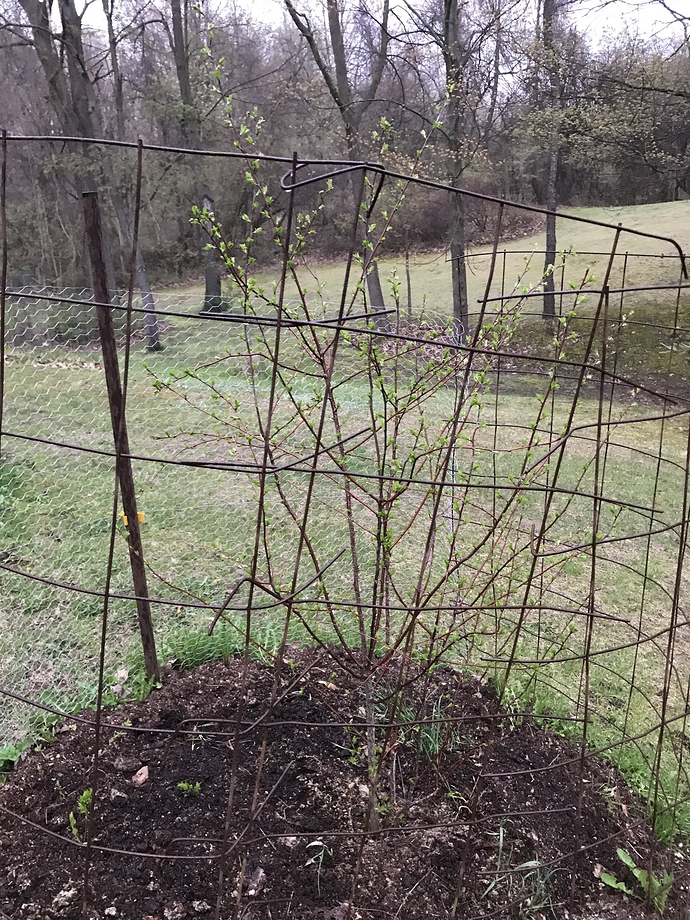 The huge number of cherries that set on the bushes this year are nearing ridiculously high amounts! The bushes are so prolific they are taking over the next row of clove currants! Even the suckers have cherries on them! 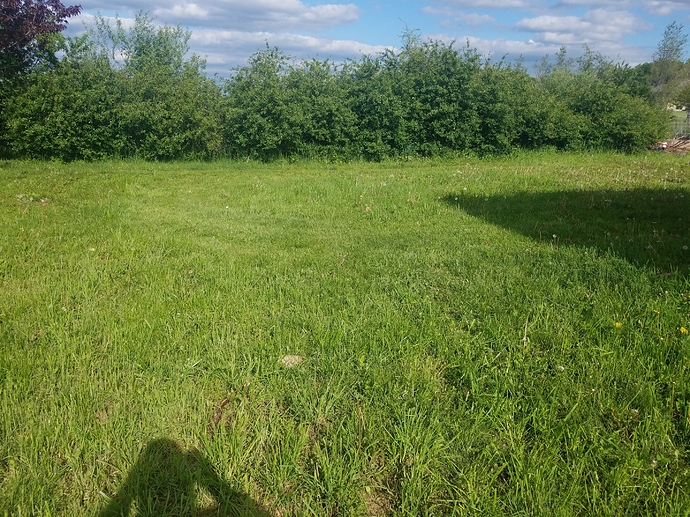 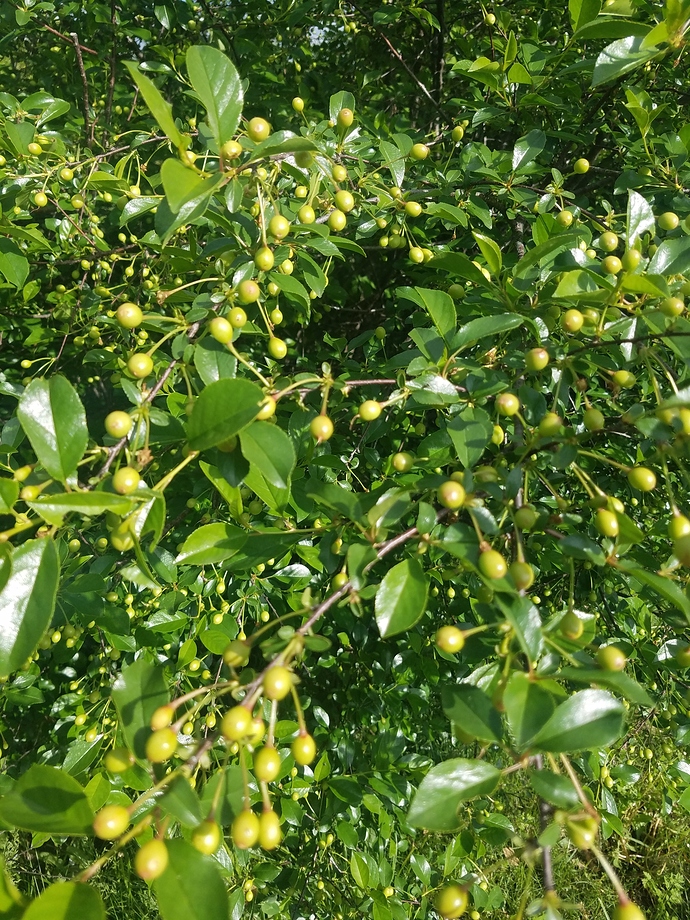 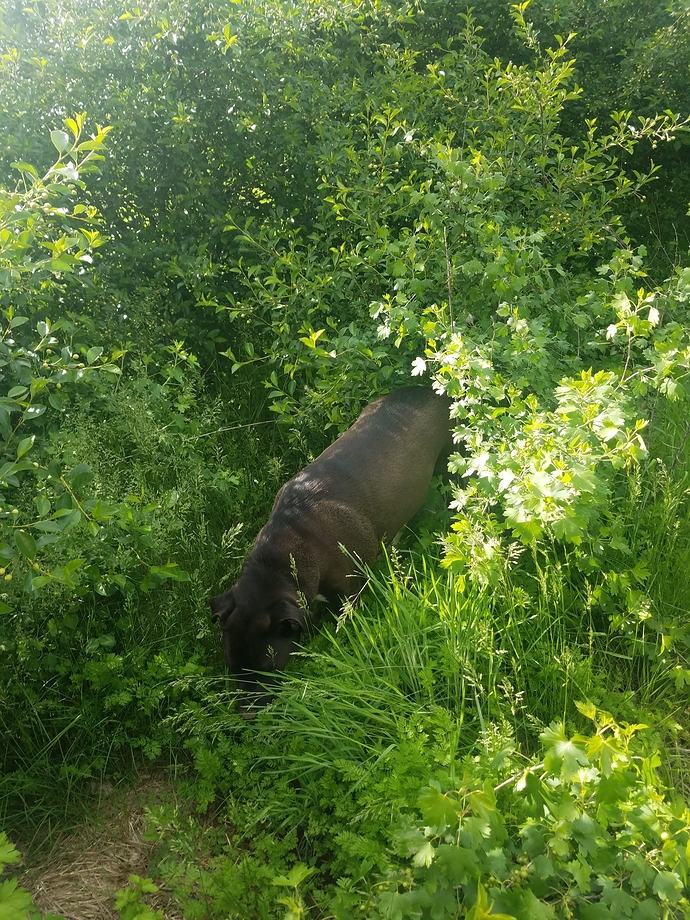 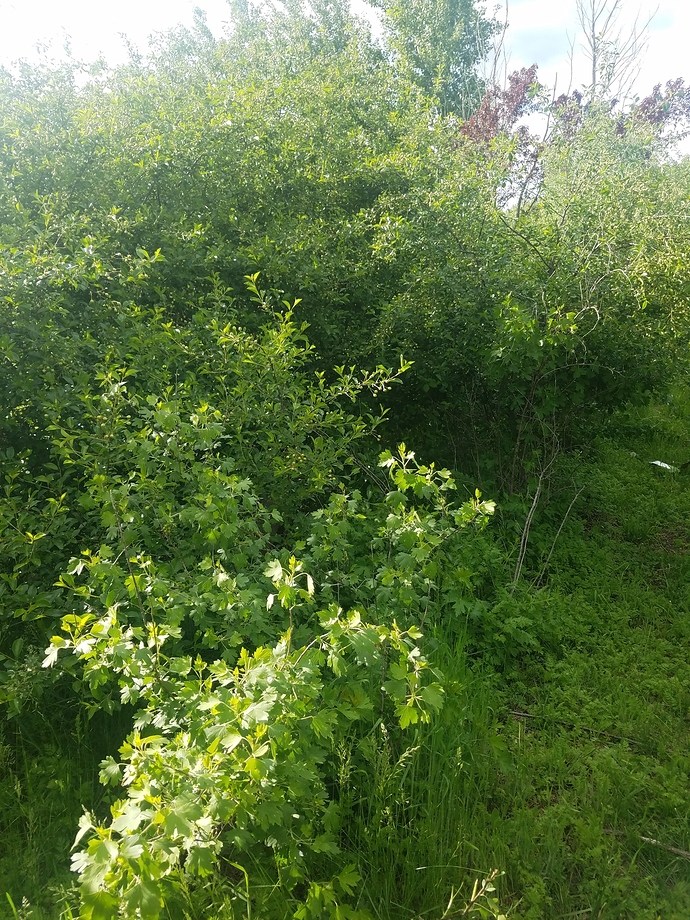 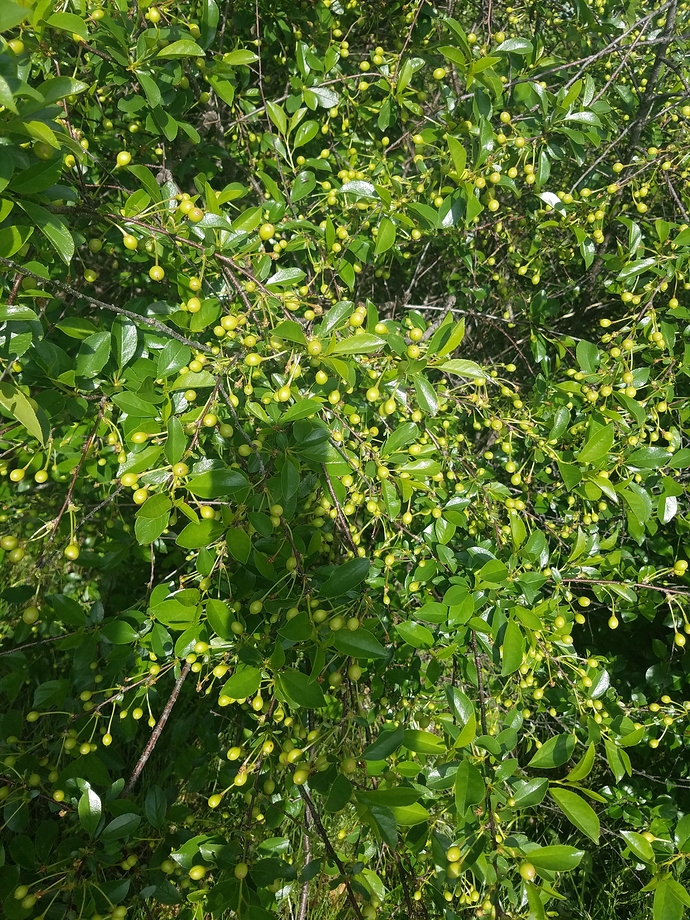