Planted 4 varieties of this series in the Spring of 2011 as 2-foot tall potted plants. 2014 was the first year they all fruited. Last spring Juliet was the first variety to bloom (May 27), and the same is true this year, although this year it’s 12 days earlier than in 2014 thanks to a milder winter and a warmer spring. 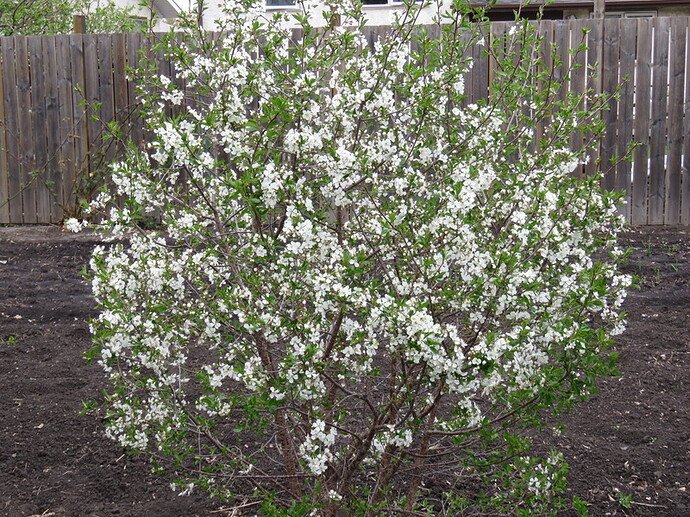 You can protect it from the frost by covering the whole tree with a tarp of some kind and put a light bulb in the center of the tree and leave it on over night. This way your tree will be safe from frost.

They might be fine anyway if it’s not too bad. On 4/22 my ER, NS & all my CJ’s were in full bloom and I woke up to 29 degree temps that morning. There was no affect on the petals on any of my cherries, and they have lots of green cherries on them now. But like Tony said it could be a little insurance to cover 'em.

I didn’t cover them and it got down to 30F. They look fine, and based on that chart by Michigan State University Horticulture Extension, tart cherries in full-bloom stage suffer 10% kill at 28F and 90% kill at 24 F. So I should be less than10% kill, so no problem.

The problem we get here on the wet side of the PNW is wet and cold. We find that consistent wet and pretty cold, like 35-45 is pretty tough on these cherries. Montmorency handles it pretty well. North Star gets a lot of diseases. Most bush cherries get diseases and lose their cherries, which is a bad combo.
John S
PDX OR

I also have a NorthStar (planted in 2012) which is getting to be good sized. It didn’t produce much last year due to some sort of issue with the flowers (blossom blight?). This year, there has been very little rain, so things are looking good.

I have 2 Carmine Jewels. I had some others but they didn’t make it. The CJ seemed hardier than the others. The first year at my cottage they failed to thrive. No growth. Still better as Cupid, Romeo, and Crimson passion died. I had too many anyway! So CP failede to grow, but both were alive. So I brought them in the city, put them in pots and they exploded. 3rd leaf now, but from the lost 1st year, more like a 2nd leaf tree.
one had 4 blooms, the other nothing. Both are growing like crazy. Next year they will produce. I’m giving one to another gardener. So I’ll be down to one.

The CJ seemed hardier than the others. The first year at my cottage they failed to thrive. No growth. Still better as Cupid, Romeo, and Crimson passion died.

I know my experience is opposite that of many with CJ being the weak-growing one. I would suspect a label swap, except I got the CJ’s from two different nurseries. I’m looking forward to measuring the brix this summer.

Drew, Romeo died for you? I thought it just became available this spring. I’ve just planted one in March (this year).

Drew, Romeo died for you? I thought it just became available this spring. I’ve just planted one in March (this year).

That and Cupid I got in Canada, it’s 16 miles away

I think what happened to us is why anecdotal evidence is useless. I actually lost those plants in the summer of 2013, not last year. I should have left them here in the city! Cupid and Valentine have yet to make it here but are for sale 16 miles from me. 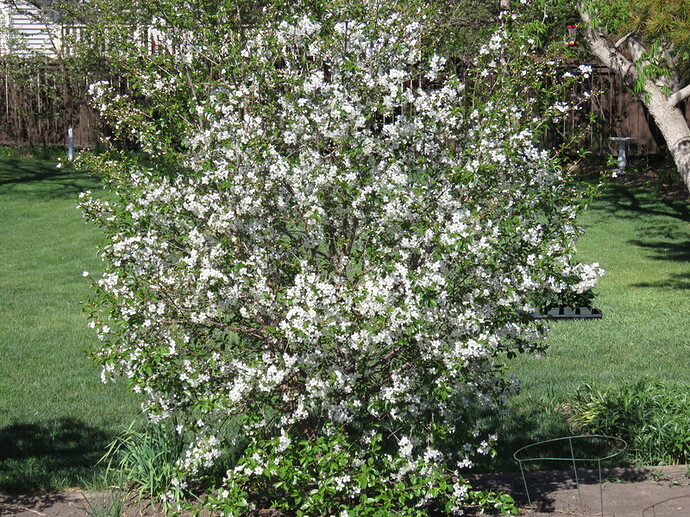 Wow, cool! Now I want another Romeo! My Carmine Jewel is going to produce one cherry, pretty pathetic! Next year should be a good year. I have it in a pot, but I need to put it in the ground!

Of the Romance series, which cherry tastes the sweetest?

Of the Romance series, which cherry tastes the sweetest?

For me if I want a sweet cherry I would grow one on the NY cherries, for tart Carmine Jewel is probably the best one as it is super productive. It is not sweet though. Juliet, Romeo, and Cupid are better for eating but still sour enough you can’t eat a lot of them. Carmine Jewel has a small pit and an attractive dark color. With one plant yielding 25 pounds, I doubt I will grow anymore than one.
Check the read more link under Carmine Jewel.

Here’s a pic of my larger (~7.5’ tall x 5’ wide) Crimson Passion as of a few days ago. I found some PC bites, so I thinned them off and gave it a coat of Surround. 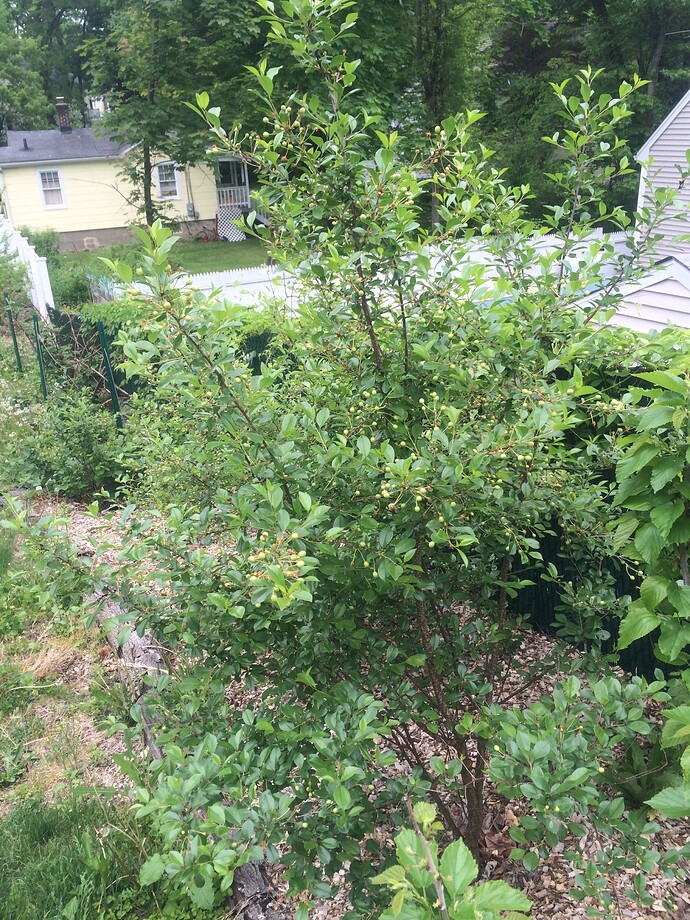 Thanks so much Drew. Sounds like Crimson Passion and Juliet are the ones to try which would get closest to sweet cherries.

I’m interested in bush cherries because they are supposed to be easier to grow than tree sweet cherries. I like the idea of growing them in a bush for ease of management.

Nice pic Bob. Let me know what you think of them at harvest.

Sounds like Crimson Passion and Juliet are the ones to try which would get closest to sweet cherries.

Yes, I don’t think Juliet is available here yet? You can get CP from Honeyberries USA. I had one, I may get another one day. I hate losing plants, makes me want to try again. Although i really don’t need them.

I need to get some romance cherries.

Interesting about what you’re seeing with growth Bob. This is just the first leaf for me and my plants were different sizes (larger Carmine Jewel and smaller Crimson Passion), but I’m seeing something similar. Every bud on my CP burst out running and now have about 6 inches of growth. 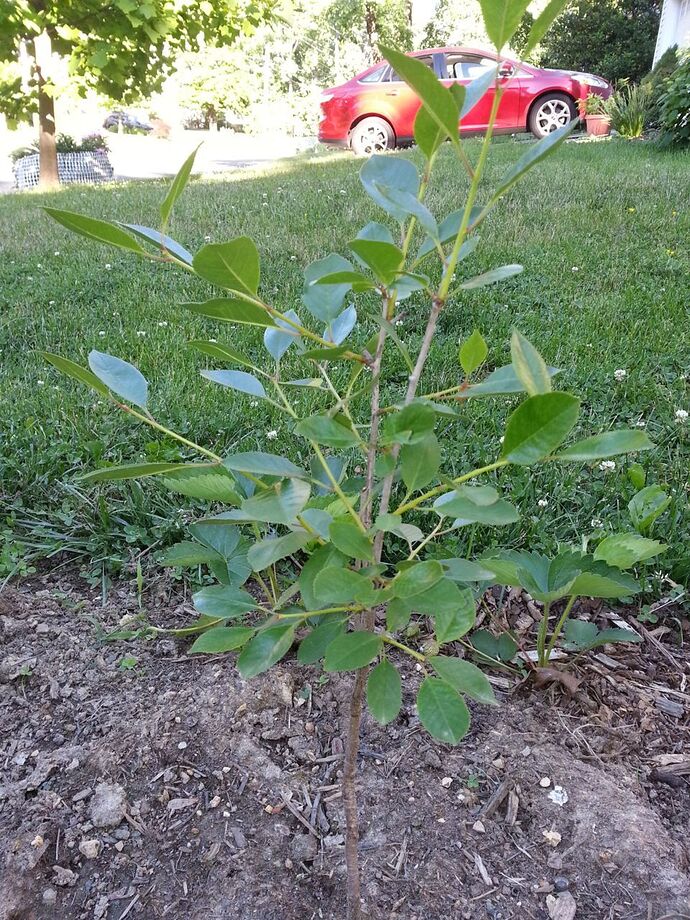 But on my much larger CJ bushes, a few buds have gone to maybe 3 inches of growth, but the vast majority just leafed out and are still sitting at the first leaves with no further growth. 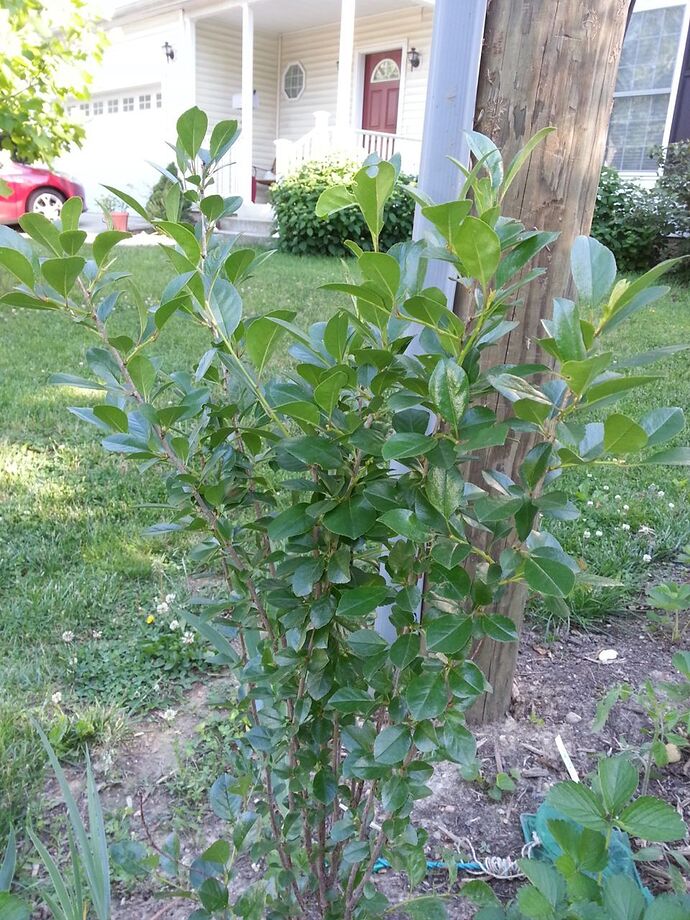 Same soil, same sun, etc. but definitely different vigor. I’m sort of thinking that it is because the CP bushes were smaller and had a better root to plant ratio so maybe they can spend the energy on top growth whereas the CJ bushes are spending a lot of energy on new root growth and are just getting ready to sprint… at least I hope so.

Yes, I don’t think Juliet is available here yet?

HoneyberryUSA has both Romeo and Juliet for Fall shipping this year.

Interesting about what you’re seeing with growth Bob.

I wonder if the growth difference is due to the soil. In particular, maybe CP handles moist, organic soil better than CJ? Mine is well drained, as it is on a fairly strong slope, but there is a ton of OM, as before I planted anything, I dug out the whole bed. I removed a bunch of rocks and asphalt driveway chunks (thanks previous owners…) and used leaf mulch in this place. After planting, I put down a thick layer of wood chips. CP seems to like this just fine, but CJ has struggled. The row has gotten good light (almost complete sun) for the last year (massive tree to their NW removed), and OK light the year before (after a bunch of trees to their S were removed). The first two years (when one CJ died) they had iffy sun.

I have another spot in the yard where is is relatively dry and very sunny. I planted a CP there and it died a few months later. I replaced it with a CJ and it seems to be doing OK, after more than a year.

Based on the above, I’d be interested to see if someone in the PNW would see a similar growth pattern (better growth from CP than CJ).