It was a shame to see. The night/day of June 29th 2017 a windstorm came thru and an unnoticed bark inclusion occurring at the point of branching ~3-4 meters up from the ground did severe enough damage that the ortet ‘Hark’ pecan had to be leveled. A narrow crotch angle was the cause of the bark inclusion; water seeped inside and formed rot.

There could have been the possibility of reducing the canopy and cleaning up the torn area, and delivering a healthy dose of Agri-Fos fungicide stepping back to see if it would recover… but that wasn’t an option. The original Hark grew in a city park, and the eminent danger it posed took that off the table.

We all see things come and go. Fortunately, there are vast propagations of this best far-northern pecan. Bill Reid in Kansas northernpecans.blogspot.com has an entire orchard of Hark among all the grafting enthusiasts; as well as John Nolin at Nolin River Nursery whom I’ve sent many-many scions to during these last two years. 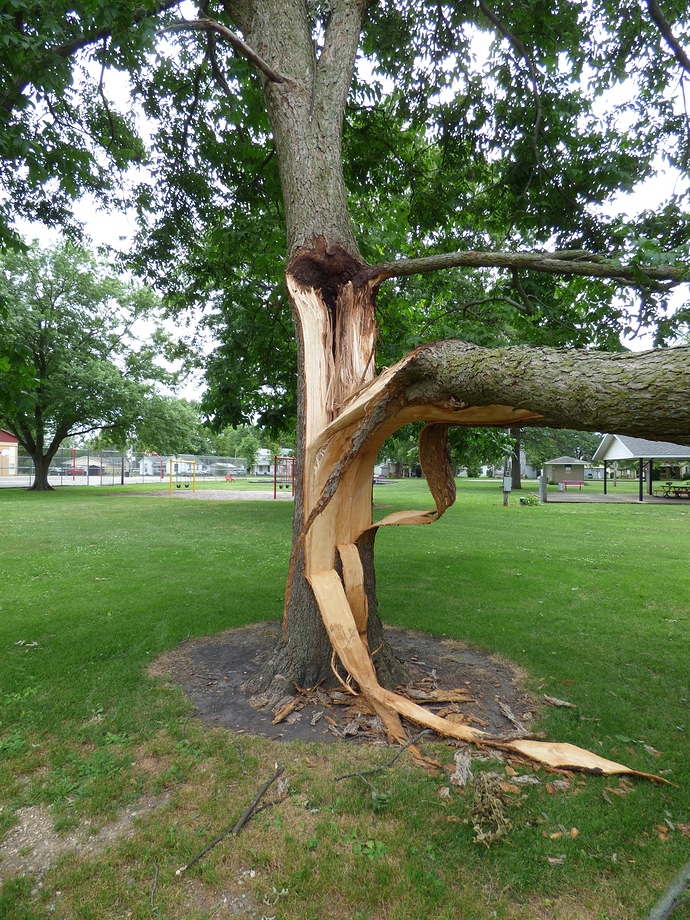 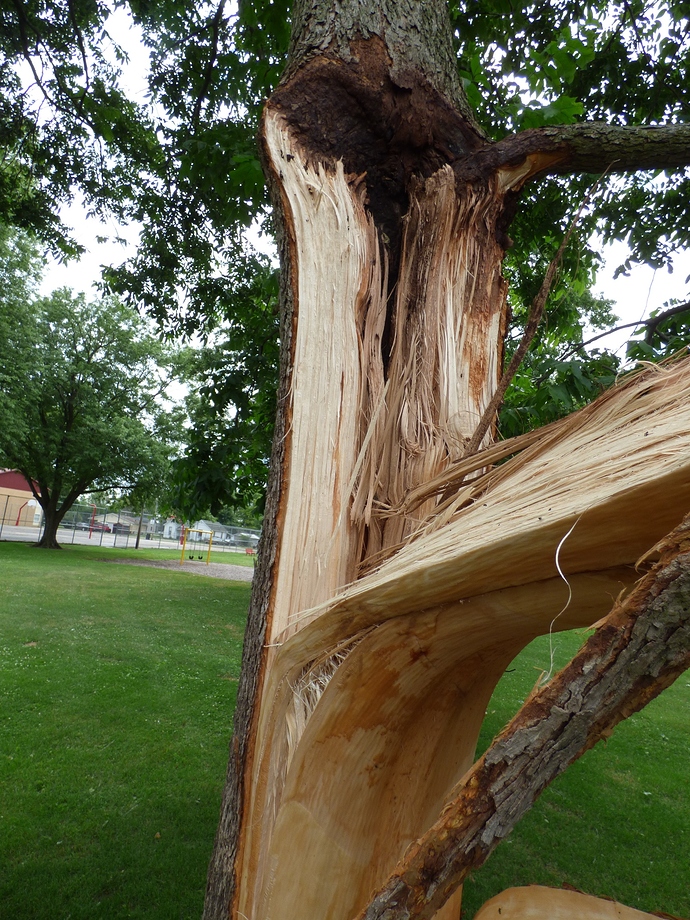 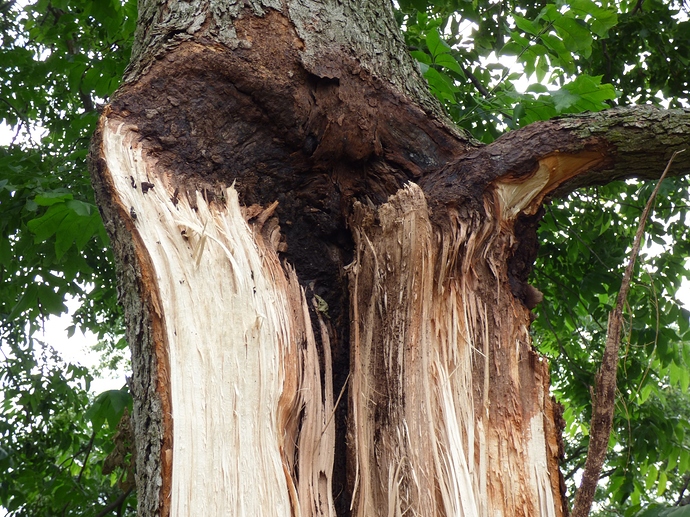 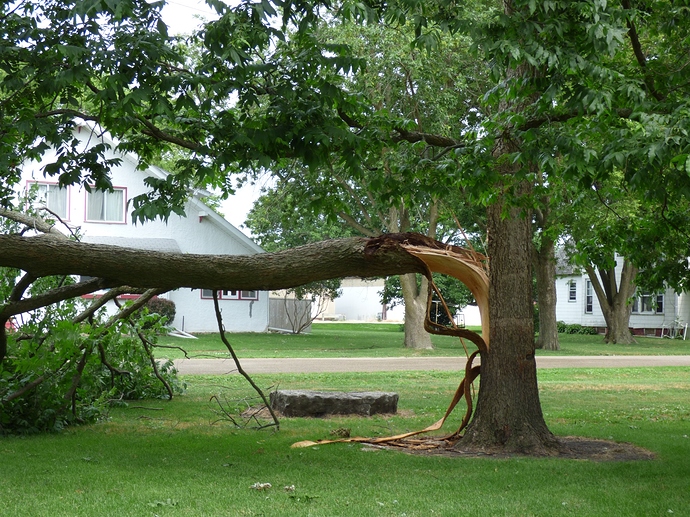 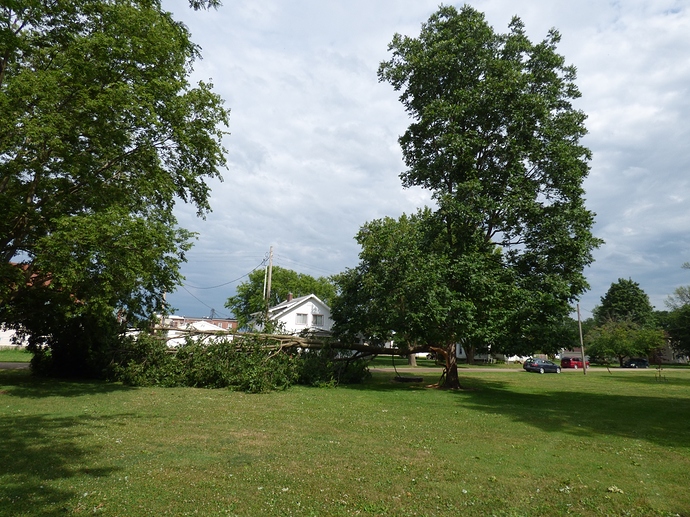 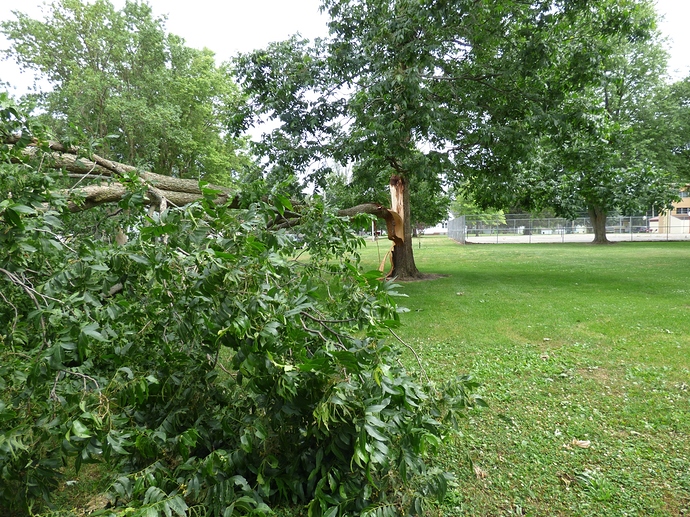 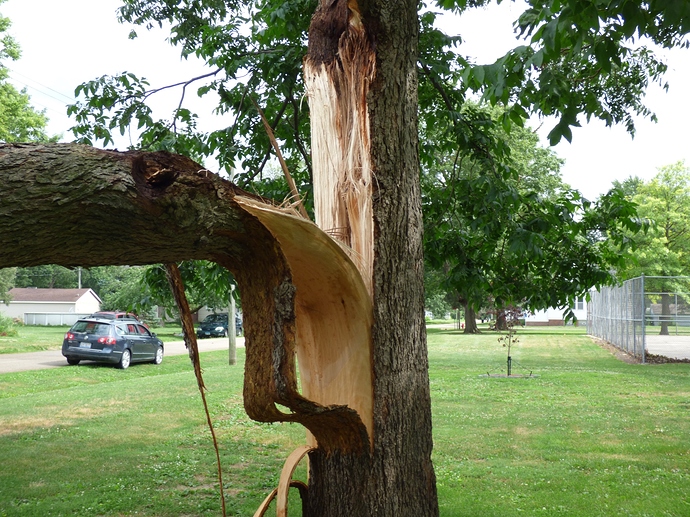 Here is Bill Totten whom grew this tree from seed and plucked it from one of his nursery rows of 2,000-3,000 seedlings. Bill was contract growing pecans for the state of IL circa 1980. After it being in-ground three years at his nursery, Bill unknowingly planted what was to become the best ‘far-northern pecan’ capable of rivaling any ‘northern pecans.’ When put thru a shelling machine, it’s difficult to discern Hark from Kanza. It was in spring 1981 Bill Totten planted it as a dormant bareroot seedling. In 2017, it was 70’ tall. 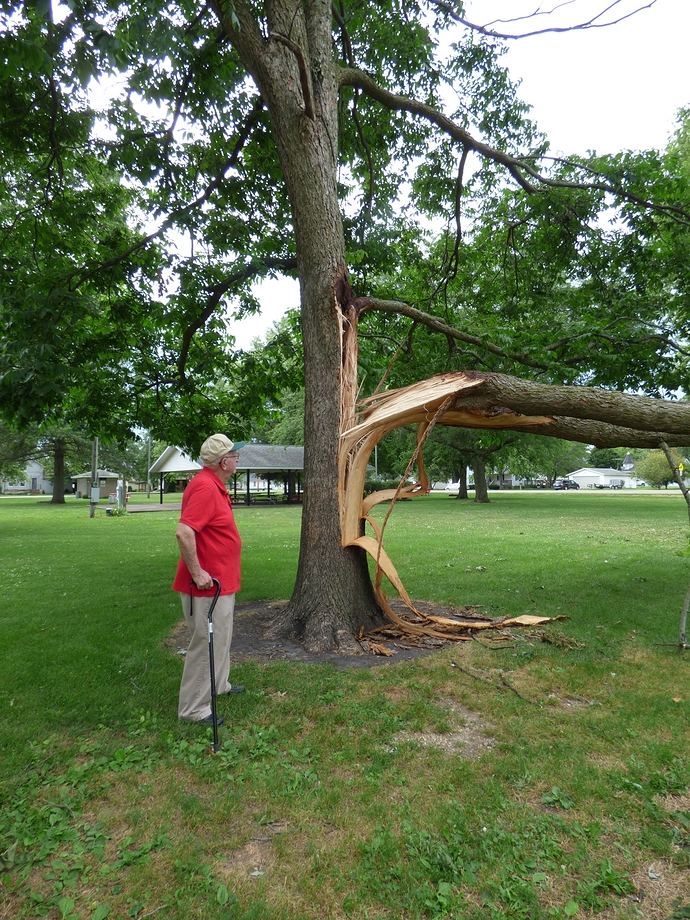 Most experts believe its parentage to be of ‘Major’. It is very likely it was. Bill collected seed from where we are (across from New Boston, IL.) into Missouri. It’s possible that while in Missouri, Bill picked up seed from a ‘Major’.

That’s very upright for a pecan. All the branches are upright likely resulting in many narrow crotches. You can see one clearly in the first picture above the current break. Is the tree prone to this in commercial production? Does this make it a poor yard tree?

fruitnut, it needs training most like any pecan while in its youth. Bill Reid told me not a single tree in his orchard of Hark has those type of crotch angles. Of course and for others to understand, the more right angle of a branch the better on any tree whether a fruit tree, a nut tree, or any ornamental.

That’s quite a sight.

Ortet. Had to look that one up…

70’ seems pretty impressive tree for as young as it is, 36 years old. Young for Carya, I think. But it looks like it had ideal growing conditions. Open space and no competition except for some grass.

I had to look it up too, but I was going to pretend I didn’t.