I budded cherries for the first time in the fall this year. Unfortunately, almost all of them have sprouted. I’ve fall budded hundreds of peaches and only once I recall a fall budded peach sprouted. The graft died because it couldn’t harden off for the winter. I expect the same thing happens with cherries.

I don’t know what it is about cherries, but apparently the fall buds push growth in cherries. 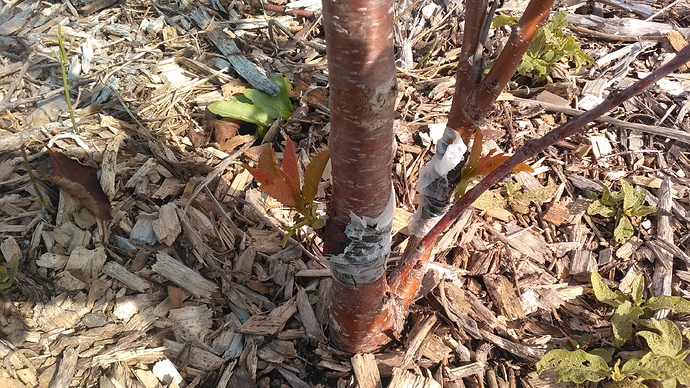 Knock on wood, none of my cherries have broken bud that I grafted last month. From what I can tell my buds still look viable.

I wonder what the difference is. I’m budding on Mahaleb and I budded about a month ago.

I grafted to Mahaleb as well. I would guess you have more heat units than me.

Olpea: I noticed your bud grafts are very low on the trunk, almost at ground level. Is that because you wanted to get it on the rootstock and not the variety on top? Are you going to get rid of the top part and redesign the tree? Just curious what the reason is for low graft (maybe it’s done frequently, I just haven’t seen it?)

I always graft mine low. More out of habit than anything. I started doing it because I wanted to try to get some trees to root out on their own roots (when I replanted the tree). Also wanted to be sure any low shoots came from the scion portion.

For the most part though, it really doesn’t matter where you place the graft.

Olpea,
How are those pears you rind grafted doing? Rind grafts take a long time to heal in comparison to any other type of graft. It takes on average 5 years for rind grafts here to fully heal over but only 2 years for cleft grafts. My pears I tbudded last year look great!

I rind grafted my neighbor’s pear tree. If you recall the trunk was probably 4" in dia. I still don’t know if the rind graft will heal. The base of the trunk has gotten bigger, and it’s a lot to callus over. I only had one of the rind grafts take, so it’s a lot of callusing to go all the way around and heal the trunk.

I was worried about blowout of the graft, so I ended up giving them a small pear tree I grafted, just in case the big tree fails.

For the most part though, it really doesn’t matter where you place the graft.

I like going low because it’s easier to force the bud. In this case too easy. I won’t have expected the bud to grow without being forced. Esp this time of yr. A graft placed in the top of the tree can be hard to force.

I do remember it will heal eventually. I’ve done ones that large and it just takes time. It will have pears on it soon. I should have asked what is the scion wood because that does make a difference?

It might survive, depends how hard the winter is going to be. Just cover them with leaves/hay anything you can find. Maybe even dirt would do. I sometimes force my summer grafts and they usually survive winter just fine.