We are in need of some additional cherry pitters, largely for use on Carmine Jewell cherries (eg a bit smaller sized), and was wondering which models people here had found worked well. Any suggestions as to which ones to get (or avoid)?

This one DOESNT work… 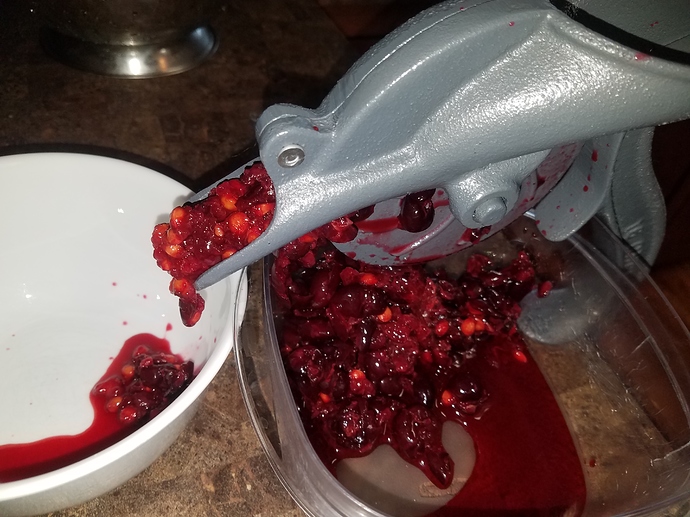 Thanks. I’ve heard that many designs fail with smaller cherries, like the CJ. The one we have now is OLD, just some steel wire bent into sort of a hypodermic type shape. Works well enough on any sized cherry but I can’t seem to find more of them. Maybe I will just have to try some (from places which have a good return policy).

I’ll be following this thread! I found that I have very little patience with hand pitting CJs. I only had to pit a gallon by hand this year and realized how much worse it will get as production increases. My CJ and Northstar were about the same size this year, with Juliet being a bit bigger than those, and a mechanical cherry pitter will be a requirement. I hope to see what solutions others here have found.

I think the design is sound, Ive seen it work well in videos. I think its just designed to pit cherries with a certain sized pit. Should be easy to design something similar that would do CJ fine, but someone would need to do it. With CAD and CNC machines, Id think it wouldnt be extremely hard to do, but requires specialized equipment… Maybe its something that could even be 3d printed!

It mashes the fruit to a pulp

OK if you’re making jam, not so great for pies

Look for an antique enterprise mfg model from the late 1800s with adjustable side plates. They show up on Ebay more often than I can understand.

Didn’t know they make adjustable ones. To bad they quit making them…

@txpanhandle1 I appreciate your input. I used a similar one decades ago that an old girlfriend of mine had when we were putting up cherries. Took a look on ebay, and amazingly there was one at a reasonable price, so I grabbed it. It will probably need a bit of cleanup, but I will give it a try with some CJ and Evans sour cherries and report back as to how it does…

Can you confirm this works for carmine jewel?

my carmen jewel is too young to have fruited. It has been able to do all the tart cherries we have put through it. it does mash the fruit as stated. It does match the idea for the mods you had in mind.

Maybe one could make a pitter. How about take a jar with a plastic lid, melt a proper-sized hole in the lid with a piece of hot metal held in stove flame. Set the cherry over the hole and use an appropriate rod or skewer to plunge out the pit into the jar. The birds or critters got through my netting while I was traveling, so I have no cherries to test the idea on. If anyone tries it, let me know how it goes.

Well it’s been a few months but finally had a chance to try out the Enterprise Mfg adjustable pitter I picked up.

We harvested our cherries last August, and froze them whole, thinking we’d get around to pitting them in the future. To test, I thawed several cups of the cherries, and put them through the pitter. I played a bit with the adjustments, but ended up settling on the smallest size. Basically it does an OK to good job; not perfect but nothing is. One still has to go thru the output and check for missed pits, I’d say it is about 80% or so effective (these were CJ and Evans cherries BTW) However compared to pitting by hand, or with a one at a time hand unit, this is a very big improvement time-wise. The cherry flesh is crushed, so if you wanted whole round cherries this isn’t the one you want. But for preserves, fillings, sauces and the like it works fine.

So we will be using it. Now I just have to find some food safe paint to use on it.

would it work better with fresh fruit?

This is what we have. At least it looks identical, except for the packaging. It’s not super fast, but at least it pits 4 cherries at once. It has two different sized screens for small and large cherries. I would say it’s 95%+ effective. I really don’t like having even a single pit in a cherry pie, so I count the 4 seeds and empty them each time I pit 4 cherries.

I don’t know if they make it anymore, but here it is on Ebay.

Maybe. Can’t try it until next summer though.