Cherry Tree's in the Mid-Atlantic Region

I started growing fruit trees roughly 15 years ago. I gave up my first go around as everything either died or runted and never produced fruit. This included 4 cherry trees from Lowes that died. The last 3 years I started trying to grow fruit again and I have had some success with fruit and a lot of success growing trees

. Last year I decided to give Cherries a try again and planted 4 or 5 trees. This included a bareroot Craig’s Crimson on New Root 1 and a large 7 gallon potted White Gold on Mazzard, both looked very healthy at the end of the season. Fast forward this year the Craig’s Crimson leafed well, but now looks wilted. We have had no extremes (heat, rain, drought) since it leafed. The White Gold looked like it started to Leaf but wilted. I am unsure if it is trying to leaf again or is dying. No sign of canker, insects, disease. The Craig’s Crimson on New Root 1 was put in a raised 4 ft x 4ft x 1ft raise container. I do have red clay soil. I assumed the 4 cherry trees that died on my first attempt died due to poor rootstock choice (I guessed Mahleb) and the location I put them in my yard.

This time I am clueless why the Cherry trees are dying/not thriving. Does anyone have any suggestions on what I am doing wrong? Or do I need to keep planting with the idea that x % are going to die?

I planted 4 more cherries this year on Maxma14 - like last year the trees so far are leafing out well.

Cherries are indeed a pain in the mid-atlantic, but they never up and died on me. So I don’t have any great suggestions. I would suggest not getting another Craig’s Crimson as I heard that is not a good east coast cherry. Also I would avoid CA-developed rootstocks until they have been tested for many years in the east - skip the new root. I have personally had good results with Gisela 5 and 6. Mazzard should also be good though, so your problem is more than you picked the wrong rootstock. I assume you planted the potted WG last season? One year I planted a potted cherry after it had started to get warm, and it died. Also I once tried moving an in-ground cherry that had started to leaf out just a bit and that one also died. Those are the only cherries I lost.

Craig Crimson/New Root suckers profusely. Yes I planted the potted WG last season. The WG would have been planted around the middle to end of May last year. I had not pruned it, moved it or sprayed it (other than copper during dormant season). It is planted at my fathers farm, I will take a picture of it and post as soon as I get a chance.

The White Gold Cherry looks like it is dead. Totally defoliated some green when you scratch the bark on a lower limb. The Crimson Craig is still defoliating, but has a nice green branch about a foot above the graft. This is the same thing that the cherry trees I had previously did - die at the top, then come out at the bottom, then eventually die.

The Stella I have on Colt that I planted last year is doing extremely well as is the Black Heart Cherry (rootstock unknown). Are there any nurseries that have a large selection of Cherries on Colt? My cherries on Kyrmsk 5 are doing okay but they are not thriving like the Stella. Looks like Colt may be the wood to go. From the description on Orange Pippin Colt is described as not Cold Hardy - anyone have any insight as to what temp Colt is hardy?

In case you have not read this thread.
My Sweet Cherry Tree is dying!.

I’m sure Colt is OK in zone 7. Its considered an “old” rootstock so is not so common any more.

I have a bunch of cherries on Colt. Bay Laurel often sells heaps of trees on Colt.

My Black Tartarian on Colt finally flowered this spring… maybe I’ll get fruit?

Gisela-6 and Gisela-12 are supposed to be good for the East. I’ve got a weird mix of cherries/stock combinations in z6. Still only a few years in.

Bleh. My cherry tree had maybe 6 cherries, and all of them … rot? Some had PC scars, and I think it triggered rot of some kind. Every cherry had brown patches despite being still green.

I read your thread on your tree dying on Kymrsk 5. My problem is Kymrsk 5 is widely available, but maybe I should be patient and go with Giesla or Colt rootstock cherry trees. I am thinking colt is the way to go. Going with Colt will likely limit me to older variety trees as Colt does not seem so popular anymore. Of course my Stella on Colt could die next year …

Thanks for the Bay Laurel suggestion.

Pics of my White Gold Tree. This is an old pic, leaves are totally brown now. 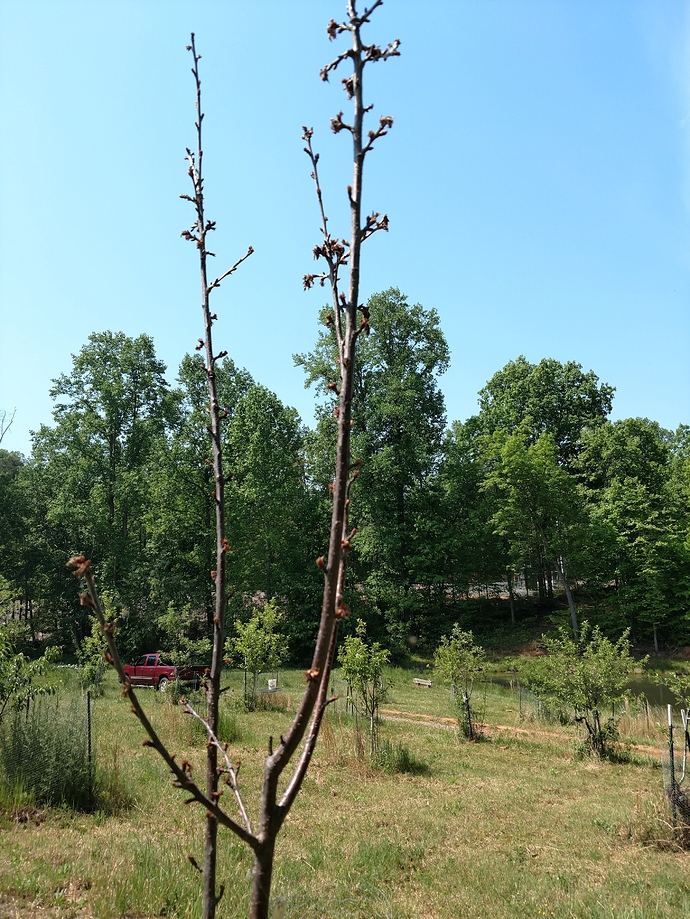 Pic of my Craig Crimson - 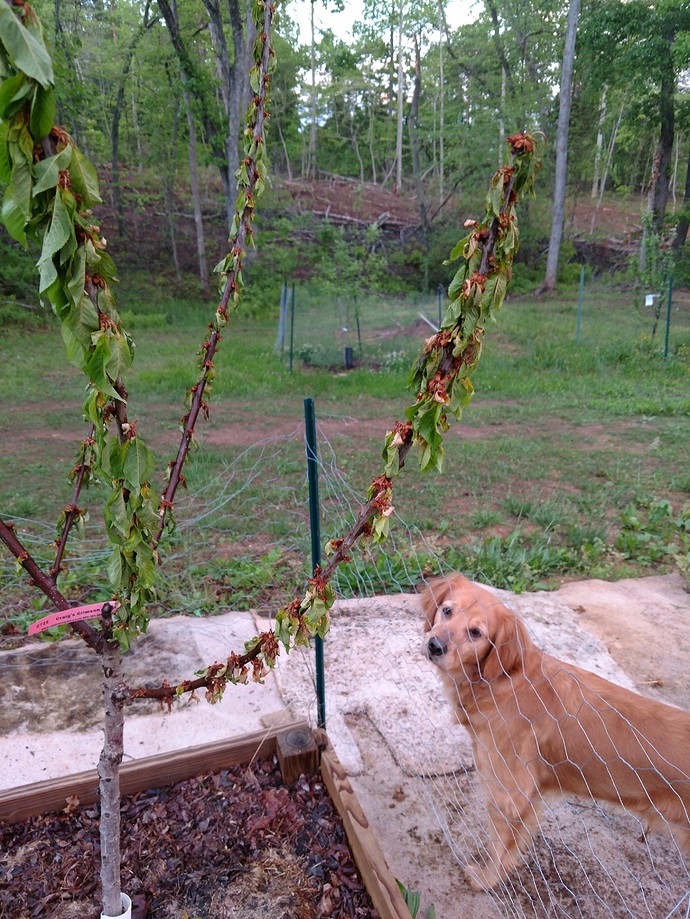 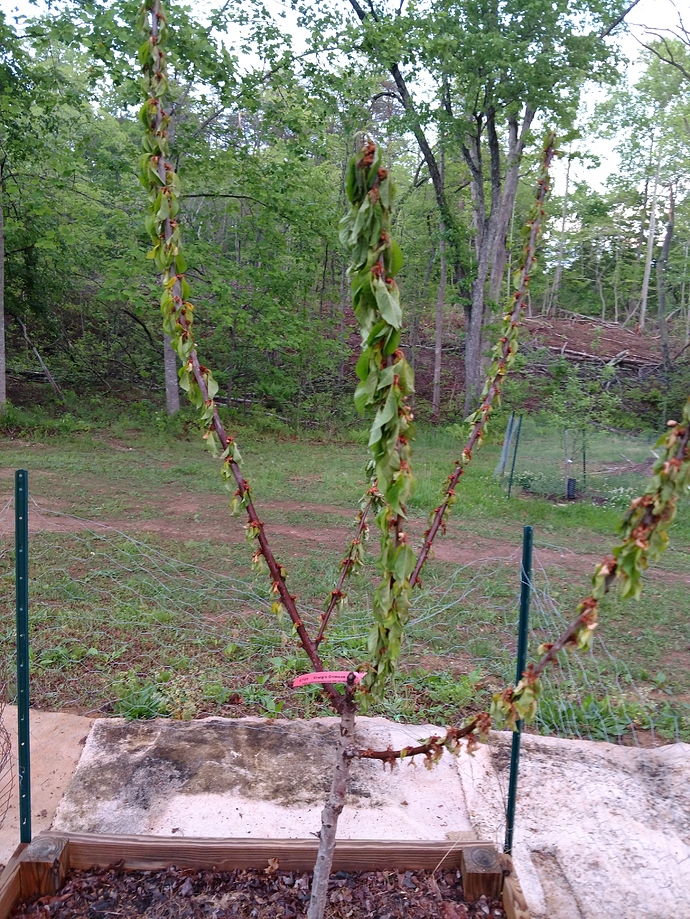 These pics are one week old. Leaves are still green but have additional wilt. A nice shiny green growth has started above graft union.