The house next door to mine is semi abandoned and there is a large chestnut tree in the backyard. It’s started dropping nuts and today is the first time I’ve gone over to pick them up. Last year I roasted a few and they were pretty tasty, so I’d like to do more this year. I have a few questions if anyone can help…

-How can I best store them until there is enough to make it worthwhile to roast? I maybe got 15-20 nuts today, they’re pretty small.
-Is there an easy way to get them out of the shell? Sometimes I find them open on the ground but usually those were eaten by critters as the deer and squirrels know it’s there. I have been tearing the shells open to get the nut out. That involves 2 pairs of gloves and pain.
-Are the brown ones still good to pick up and open? They almost always feel empty so I haven’t bothered with them, just getting ones that are all to partially green. 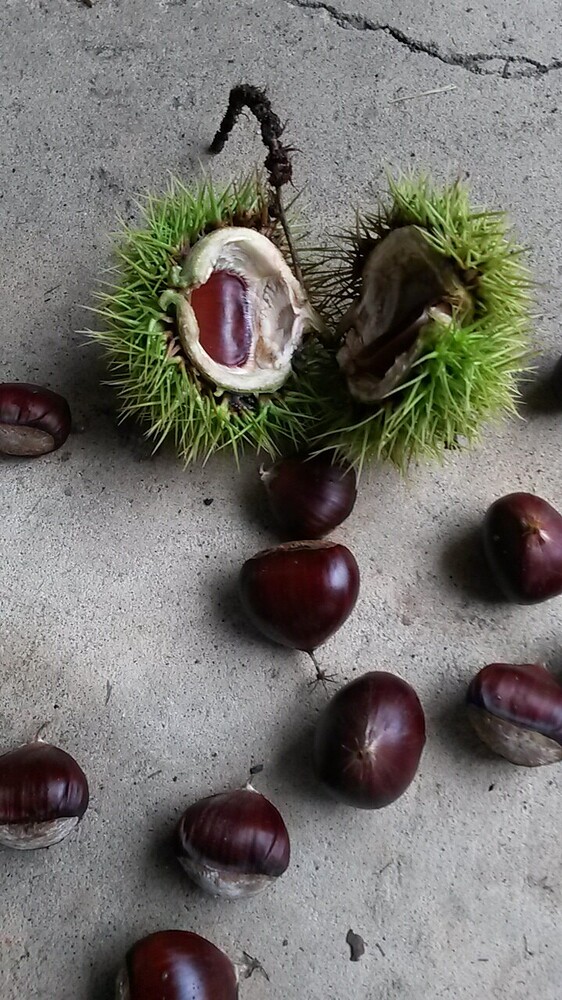 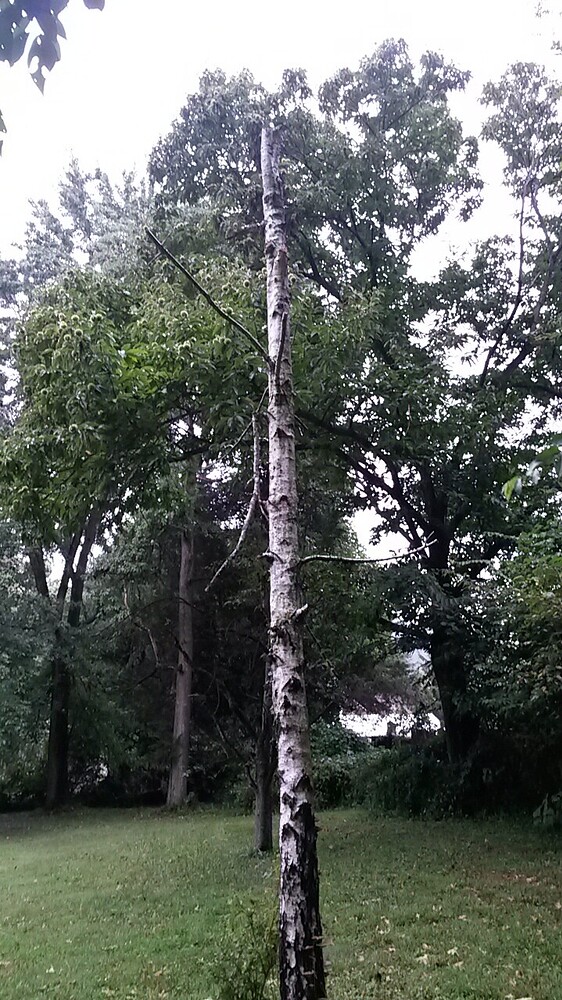 Immediately discard any that have tiny weevil holes or show dampness or mold. Stomp closed or semi-opened burs with your sneaker foot to get at the brown gems inside. Put them in a breathable onion sack (orange webbing) and hang them on a nail in a dry chilly place (near the A/C unit).

In the old days, the Appalachian hillbillies used to stuff their entire attics FULL of chestnuts piled in burlap bags. It was survival food!

The whole chestnut story is an interesting one. I planted a few of St. Lawrence Nursery’s seedling American chestnuts 3 years ago. It’d be nice if they don’t get blight… or at least until I get to try some.

My Dunstan Chestnut trees from Edible Landscaping are supposed to arrive today. I’m going to order some of the more timber form varieties from Burnt Ridge in November. They’re all supposed to be blight resistant. Sorry I can’t answer your questions yet - maybe in a few years

I’ve read that when chestnut trees are shedding pollen, that they can have a foul order. Can anyone confirm this?

I’ve heard that too, but personally never noticed. Some people can’t smell bradford pears and I think they smell like powerbait.

Imagine the squirrel that finds that hoard.

I want to remain polite but accurate. Hmm…

To me, chestnut pollen, similar to Bradford pear pollen, smells akin to the odors associated with human reproductive organs. They smell like sex mixed with cornbread.

I’m filling my yard with them

In all seriousness, American Chestnuts in full bloom is an incredible sight.

This is the TACF Maryland Chapter breeding orchard at Thorpewood estate near Thurmont, Md. Photos taken June of 2012: 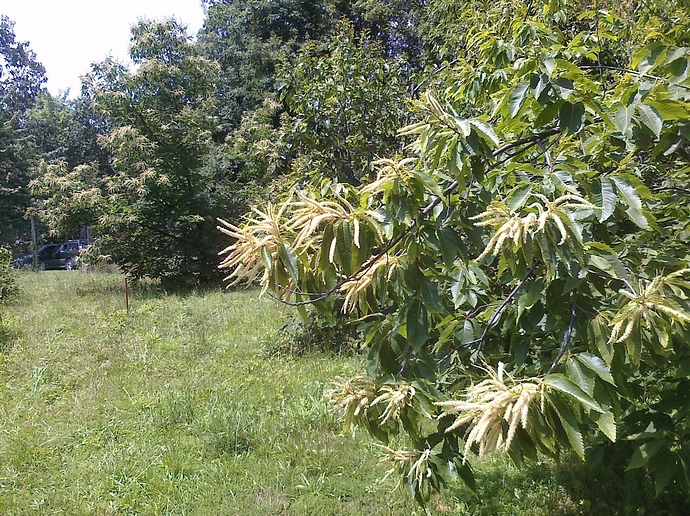 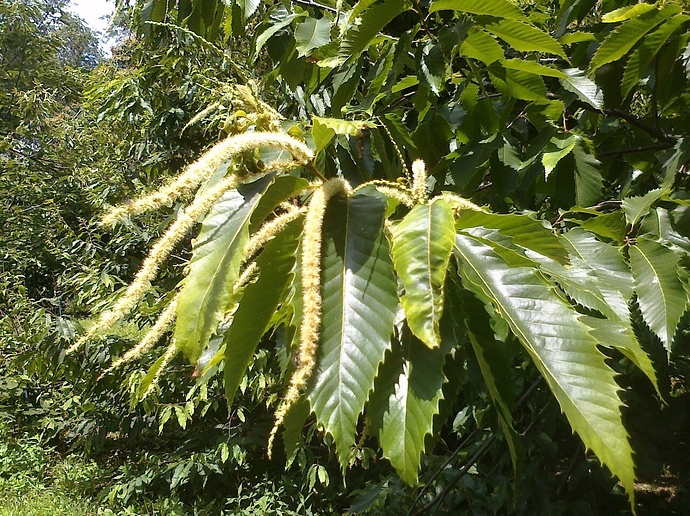 We are doing everything we can to bring these important trees back from the brink of extinction. TACF is doing wonderful work.

There is a great chapter in the Foxfire books about the American Chestnut and all the uses it had. Your very right that the appalachian people were greatly enriched by them. It was a great loss when the blight took them.

My dad has 2 large chestnut trees. He planted them when I was a kid about 40 years ago. Today they are majestic beasts that are the perfect trees for kids to climb and play in. They are very handsome trees. That being said, they are a nightmare when it comes to maintaining them this time of year. My dad is now 81 years old and they are too much for him to deal with. They are so prolific and the hulls are a lot of work cleaning up and keeping in check. The two trees produce bushels and bushels of chestnuts which can be quite tasty in small quanitities. But at least in my case and most people taste I tire of them quite quickly. We can’t even give them away there are so many.

I helped my dad prune some limbs in his chestnut trees this summer and he said he wishes he could keep the trees yet find a way to keep them from blooming or producing. To me the smell of their blooms reminds me of the smell of touring the Annheiser Busch brewery in St Louis.

I really want a chestnut tree now. Thank you for bringing them up. I planted one once but it did not take. I need to try again.

I started this tree from a Dunstan nut under lights early this year. It is now almost 9 months old: 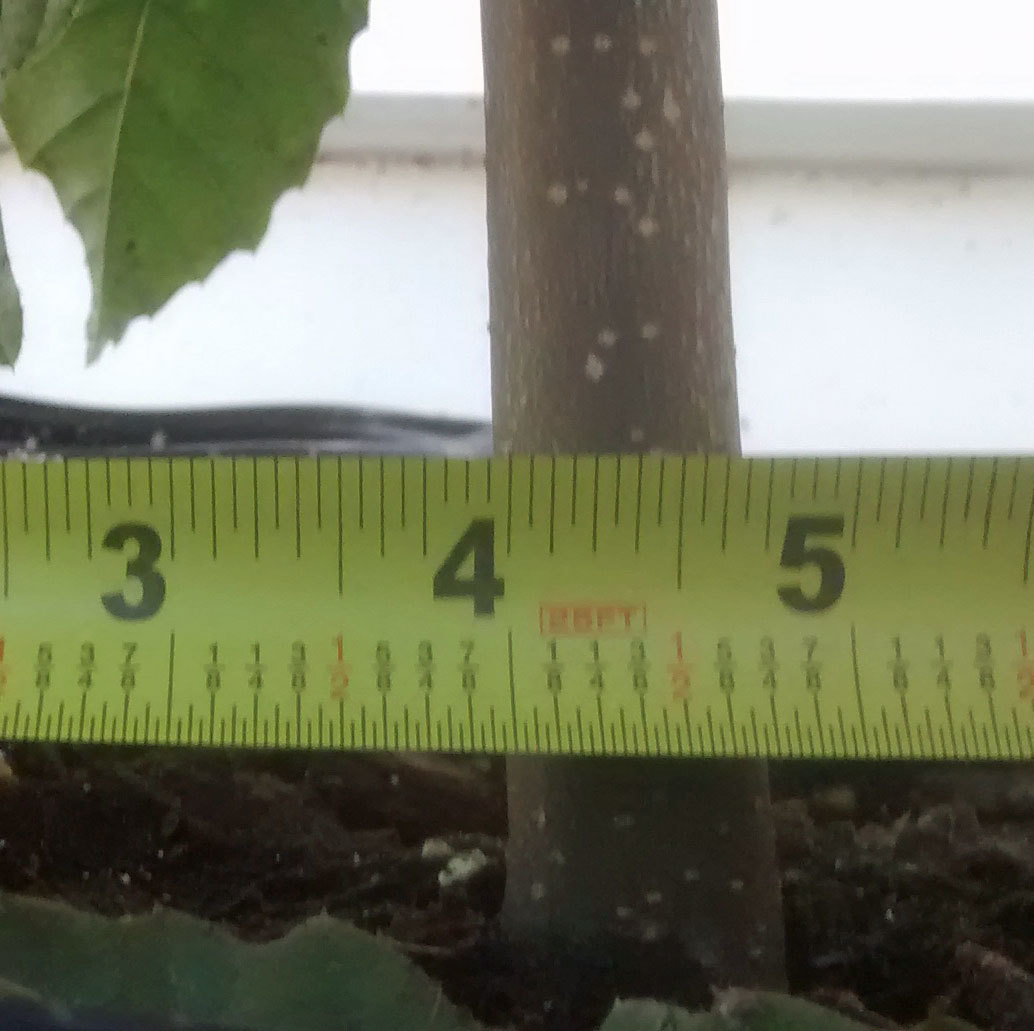 It was over 6’ tall and had a caliper of 3/4" earlier this month when I measured it. I’m hoping to plant it in the field sometime next week. I can’t wait to start seeing nuts!

fandf,
You need at least two… planted close enough together to pollenize one another. They are, for the most part, non-self-fertile. Some, like Collossal(IIRC) are pollen-sterile, further complicating matters.

Curious…the tree next door seems to be alone. Maybe there’s one in another yard I haven’t seen. Apparently my block used the be an orchard, there are a few trees here and there.

I’ve planted about 150 so far. I’ve been planting them about 18’ apart. I realize this is too close for adulthood, but it will help with pollination in the early years since they are wind pollinated. When the crowns begin to interfere, I can always thin as needed. So I don’t think pollination will be an issue.

4 legged friends are being lazy, good haul today. I can only access less than half the canopy area, I can only imagine how much more is there. 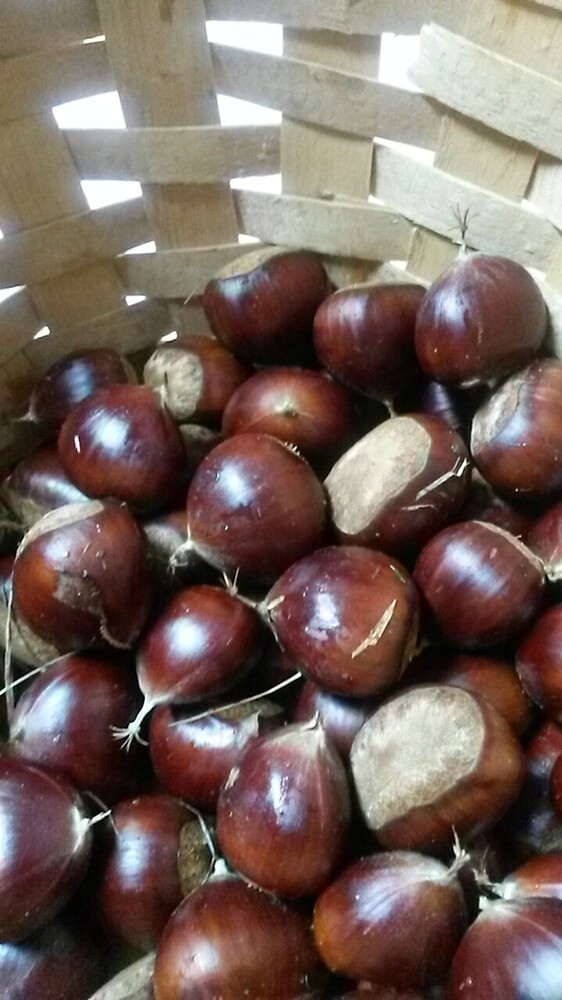 Those are fantastic looking. I would love a chestnut tree. I love everything ‘chestnut’. You are so lucky!

There is a house on my way to work where they planted a row of trees several years ago. At first they almost died and sprouted out from down low on the tree. I thought they were some kind of nut, maybe a pecan, but I was not sure. They slowly grew and this year I saw they had pokey pods on them. I realized they had planted chestnuts! It looks like they will have a nice harvest this year. Before the blight they grew here. I have a friend that’s family has lived here for many generations. We were riding our mules in the national Forest once and came by a grove of dead trees. He said that his dad told him that these trees used to grow all over but all that was left was dead trees where they once gathered nuts. He said they were chickapins. It was several years later before I realized they were American chestnuts killed by blight.