I live on a busy street in urban Southern California, and on Saturday and Sunday mornings I’ll often pick out an empty beer can from the rose hedge along the street deposited by revelry the night before. This morning I picked up an empty can…of hard cider.

Granted, its been very windy the last couple of days and this could have fallen out of a neighbor’s trash and blown here. But just the fact that an empty hard cider can shows up in my front yard demonstrates the meteoric rise in popularity of a beverage that was once common in America and then disappeared for a century.

Far from a “craft” cider, it was made from whatever the Northwest growers could not sell that month; Granny Smith, Golden Delicious, Pink Lady, Opal, and Jonagold. At least the maker lists a lot number on the bottom that you can go online and see what varieties are in it (mine was lot 134). Walking through the grocery store, the stacks of craft beer and ale along the refrigerated section now also include cases of Angry Orchard cider. I’d say apples are on their way in, not on their way out. 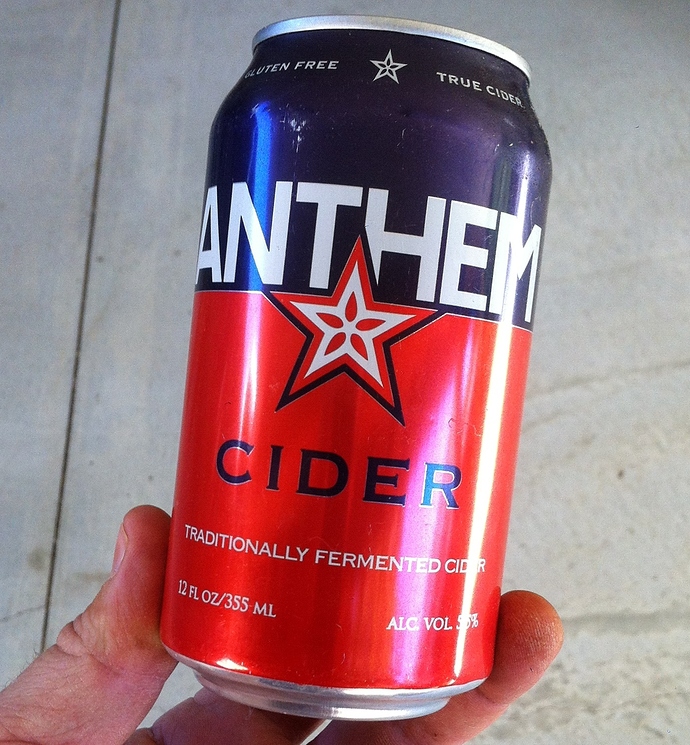 I’m wondering when the big companies are going to ask commercial guys to start grafting over apples to hard cider? Maybe never that’s a big expense and time and maybe the hard cider craze will die down.

One of my clients went into her wine cellar to gift me with a couple bottles of fine (expensive) wine and grabbed a bottle of local craft cider to add to the lot. She said none of her husbands friends were interested in drinking it and that she’d purchased it from a farmers market uptstate.

I’ve had cider a few times in the last decade from such sources but this one reminded me of the typical English ciders I remember from a visit there as a young man. A bit sweet,lots of apple essence and nice carbonation. I was surprised by its 9% alc content. It certainly went down smoothly for that high a count.

This season I’ve also been hired twice as a consultant on the issue of starting an apple orchard with the intent of producing cider apples to turn into cider. Along with spirit distilleries, hard cider mills are clearly the next big thing to follow the craft brewery craze. I love some of those craft breweries.

Here in Maine, one of the larger apple growers, Ricker Hills, has gotten into hard cider and has top worked over 80 acres to euro cider varieties. Also planting out 6000 trees next spring, all cider varieties.

Personally, I trialed a handful of commercial hard cider offerings and simply gave up on them. Just not an enjoyable drinking experience for me. Most were flat, fake apple flavored, and not even something I would use as a mixer. I’ve found ginger beer (non-alcoholic) to be on a similar trajectory market wise, but much more to my liking --either to wet my whistle or as a mixer.

From craft cider mills or the mass produced crap? The serious crafters are offering English and French styles.

I also haven’t found a really good US cider. Some Canadian ciders I had were excellent, but not from the US so far. Maybe I just missed them but I have tried half a dozen US brands including several “top” ones like Farnum Hill.

I usually have a couple bottles around, but its French or Spanish imports.

I’ve come to believe its a mistake for craft cider makers to focus on French or English cider varieties. Sure, they make excellent cider- in France or England. Our climate is much different, and they may not be even close to they same when grown here.

For that matter, it may not even be traditional apple growing areas that produce the best cider apples in the USA. Cider makers keep talking about “tortured to perfection” when describing the best cider apples, either to the poor fertility of the soil or the overcropping they do to make a bunch of tiny apples with high skin to flesh ratio. It could be that the best cider apple here is a Wickson Crab that ripens in 107 degree heat in the high desert of California.

Lots and lots of experimentation will need to take place in the next few years, but in the end I’m certain that sooner or later at some hoity-toity European cider tasting the judges and attendees will be shocked to find that the winning cider is from some obscure place in the USA.

I’ve come to believe its a mistake for craft cider makers to focus on French or English cider varieties.

I learned that the hard way myself - I grew many of the European cider apples and they had an extreme dislike of my climate. They are all gone now. The local commercial hard cider orchard had a similar experience.

The excellent Canadian ciders were made from primarily Cortland. They could get every bit as good a flavor out of Cortland as what the Europeans were getting from their varieties.

I agree applenut. It will take a while for American cider makers to get a system down and maybe a bit longer for the best to come to the forefront. I’m very happy about the resurgence of cider and excited about the possibilities it holds for growers. It’s a good thing I think.
I wonder if hard ciders offer any health benefits over say beer? I also wonder what sort of commercial uses there are for the leftover mash?

The Northwest Cider Association offers scion wood every year if you decide to give some of the cider varieties a try. I experimented here a little bit at one point a couple of years ago with their scion wood. The scions were healthy and arrived at the correct time. They sell 12" scion sticks for $2.00. The scions are grown at Washington State University Mount Vernon NWREC’s cider research orchard. The website is http://www.nwcider.com/. They post a list this year the first week of December 2015 for scion wood. The person I dealt with is
Carla Sue Craig, Marketing Coordinator
Northwest Agriculture Business Center & Northwest Cider Association
www.agbizcenter.org
tel: (360) 336-3727
fax: (360) 336-3751
carla@nwcider.com

I wonder if hard ciders offer any health benefits over say beer?

Yes, the can advertises that cider is “Gluten Free”.

Interesting they’re putting cider in a can. Glad to see it, even if it doesn’t measure up to connoisseur standards. I’d like to see cider once again the staple alcoholic beverage for the “workin’ man”, like it used to be.

If bottlers just make premium cider, that will never happen. They will price it closer to a high end beer/ale, or perhaps even wine, and most people can’t afford that as a drinking beverage.

I actually like the cheap cider Woodchuck. I’ll freely admit I don’t have a connoisseur developed taste when it comes to cider (or wine). I’ll also admit Woodchuck tastes a bit like soda pop (although more refreshing). To me a good alcoholic beverage has a balance of sugar w/ the “acid”, just like how I like peaches. I know alcohol is not “acidic” but it tastes that way to me. That’s why I don’t like dry wines either, but recognize that’s about all true wine connoisseurs drink.

I have to admit I have the taste buds of a 12-year-old, and hard cider tastes to me like something that’s gone bad and should be thrown out…

I’m still looking for a cider that I like. Woodchuck is a little too fruity and the cider I purchased from several Virginia orchards had too much carbonation. I believe the Co2 was injected and not natural and the cider had no apple taste at all. I would love to find something with a taste between Woodchuck and the local made cider with the Co2.

Hope to make some cider next year and I expect it will take several years of trial and error to make something that I like. At 10 bucks for a 6 pack of craft brewed IPA, my beer expenses are really adding up!. I believe I could afford to buy some cider making equipment and come out way ahead on the money side, if I could make a cider that I liked as much as I like the IPA.

The stuff my client gave me that was endorsed by two serious craft ale drinkers, one of whom is also a vinophile, is from “Eve’s Cidery”,Van Etten, NY. The label says "naturally sparkling cider BITTERSWEET fermented in this bottle. 9% ALC.

It is made from a combination of French, English and American traditional cider varieties from trees grown in the Finger Lakes region of NYS.

I think it is quite good with plenty of apple flavor. I expect it is also rather expensive. Bottle fermented ales always cost more than vat fermented and to me, they often taste better.

At 10 bucks for a 6 pack of craft brewed IPA, my beer expenses are really adding up!

Buy it by the case.

I’ve been making cider off and on for about 40 years and nothing could be simpler. I think fresh cider is great but the commercial stuff I’ve tried tasted pretty nasty and artificial. To make at home get a gallon jug of good , preferably unpasteurized apple juice either filtered or not. Add a pinch of wine or brewers yeast and cover jar with saran wrap instead of the lid so it can breath. depending on how sweet or dry you want, refrigerate from four days to ten days. I don’t think it can naturally get too high in alcohol because the alcohol kills the yeast. As long as it is fermenting, it will be a carbonated beverage.

If you want to bottle some allow it to go still then bottle and add 1/4 tsp of corn sugar to bottle and cap. It will carbonate in bottle. Cider apples may make a different tasting beverage but I bet you like your own if you make it.

That last text should say refrigerate after four to ten days sitting out on the counter.

So it breathes thru the saran wrap? Is it one layer of wrap and kept it tight? Does sound simple enough even for me to try if I can get this part right. Thanks for the idea!

Correct. Most cider jugs have a small neck. I just put a layer of saran wrap and hold it on with a rubber band. You just want the gasses to be able to escape so the jar doesn’t blow up. When I was in school in North Carolina I would see hundreds of jars of cider just boiling with fermentation from natural yeasts and they just put the lid on the jar but didn’t screw it on tight. Saran wrap is just a little safer.
When I was much younger I made it with frozen apple and pear juice in a clean milk jug. I’ve never tasted bad fresh hard cider. It is easy but never bottle if still fermenting or bottles may blow up. It does not need to be bottled. I drink from the refrigerated jug.