After buying specialty grafting knives and newfangled machines to help in doing whip & tongue grafts, I finally threw them all out and went back to cleft grafts exclusively. I use them even when the scion and rootstock are the same thickness, or even when the scion is thicker. It has more cambium contact length than the W&T, and when taped up, isn’t going anywhere. I always cut my scions down to one bud, and so there’s very little chance of it getting knocked out of alignment.

Cutting hard scionwood this thick used to be a chore, but I use the Craftsman utility cutters and polish the utility blade to a mirror finish on a buffing wheel. It will still take a finger off, but at least I’m not cutting towards my hand with a knife. I use the same cutter to split the rootstock, and do any cleanup with a plastic utility knife from the dollar store. 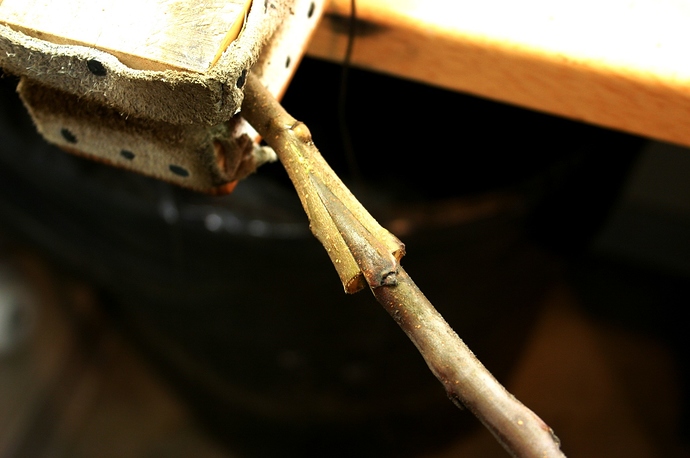 I notice an increasing number of youtube vids that show people cleft grafting pencil sized wood just as you describe. I would think that the important part is wrapping tightly and seeing the graft. You can’t argue with results. I did one cleft graft on small wood like that last year and the graft took and grew well. I still prefer the omega tool for perfect exactly fits but I think your decision is solid.

Applenut,
I feel like a butcher every time I cleft graft though have noticed the grafts actually heal faster than rinds and other types of grafts. The grafts also hold better against wind and birds. When I do a big tree I use a cheap butcher knife from menards and a hammer to split the wood. The knife I use is something like this http://www.menards.com/main/appliances/kitchen-appliance-accessories/chicago-cutlery-8-chef-knife/p-1444447731475-c-9332.htm?tid=2386304225888400450 . Still if the tree is to large rind aka bark grafts are the only thing we can use. Small rootstocks like the one you show (1/4") will heal over so perfect in a few years it will be hard to see where you made that graft.

I do cleft graft when the scionwood and the rootstock are the same size, too. Why not? I often wonder why people do not want to do it.

I think as long as we find a comfortable grafting technique that help us line up the cambium well, that is good enough.

I like cleft, bark and whip/splice graft. I cannot do whip and tongue well so I leave it to those who can.

The photo is a bit deceiving, both scion and rootstock are 3/8" bordering on 7/16". Here’s what it will look like a couple years later. 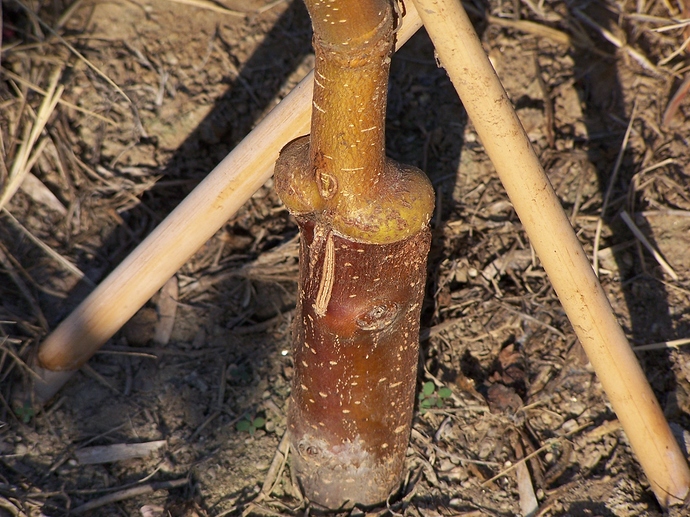 I have mostly done whip grafts for the last 20 years but I find myself moving more to doing cleft grafts now. As Applenut said, it is just easier to do. Bill

Nice to see someone with Applenut’s experience “championing” the cleft graft. Entering my 3rd year of grafting and being born with 10 thumbs

I can’t seem to master the whip and tongue graft but have have good success with the cleft graft.

Thanks @applenut! I’m relieved that I’ve used cleft grafting all this while. 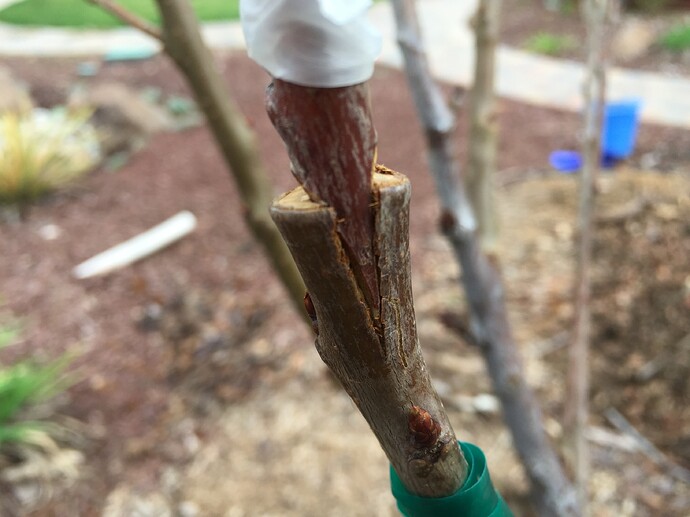 went back to cleft grafts exclusively

Are talking about grafting apples exclusively? What about stone fruits?

I do cleft graft when the scionwood and the rootstock are the same size, too. Why not? I often wonder why people do not want to do it.

I wondered the same thing ! The cleft graft just seems so easy even with the smaller stuff.

I like that omega tool too. It’s so fast and easy to use. I do lots of clefts, but still do whip and tongue also. If the wood is right for the omega tool that is the best. If it’s to small or big than I resort to other hand grafting methods.

I use it for all grafts now, stonefruit, pears, and persimmon included (though I don’t do a lot of any of these). Stephen Hayes in the UK does it upside down on a rootstock and calls it a “saddle graft”. I’ll use it even with scions 1/8" in diameter.

Summer is still bud and chip grafting, but I’ve done green scion grafting too and that works out fine.

Are talking about grafting apples exclusively? What about stone fruits?

My cleft grafts have done very well with plums and apricots, as well as persimmons, mulberries, and jujube. Partial success with peaches, which just seem harder in general.

I use cleft no matter the size, though I don’t have anything to graft which is more than half an inch- bigger trees get grafted on branches, so that I can fit more varieties. If the scion is smaller than the rootstock/branch, just use two, with a double-cleft graft.

Summer is still bud and chip grafting, but I’ve done green scion grafting too and that works out fine.

That’s good to hear. I haven’t done well with budding, so I tossed on a few cleft grafts last august. I’m looking forward to seeing how well they’ve done. So far, I’ve resisted unwrapping them, figuring that I should save it for spring.

I was just looking on line to order a grafting tool for my first year of grafting this will save me money to if if I can just use the cleft graft on some small limbs on a wild crab Apple tree.

I like the cleft for lots of stuff- if you know only one graft this is a good one:

Should have added that I really, really like a simple splice cut with nippers and wrapped with rubber tape (2155) covered over from tip to toe with parafilm. Wouldn’t want to not have chips (good anytime) or buds (so straightforward!) And is there anything more elegant than a well-done whip-and-tongue?

Almost all the apple and pear grafts I made today are cleft grafts. I use it when I am pressed for time. Don’t want to spend my whole weekend grafting. I did make a W&T graft. Not sure if it will turn out to be elegant or not.

I’m a novice grafter, and had only done chip buds before last year. Tried two cleft grafts on apples this past year. On one the rootstock and scion had almost identical diameters, so I was able to match up both sides. On the other I was able to match only one side. Both took and grew well. They don’t look nearly as nice as the whip and tongue, but they were easy, so I’ll keep using them until someone gives me a good reason to use something else.

What keeps the cleft crack from propagating deeper than intended?