Does anyone grow these varieties in zone 8B or colder? can you tell me what state you are in and what’s USDA growing zone? In ground or in pot? photos help too! I grew these varieties ( in pots outside/ no greenhouse) and we had a rather mild winter in WA state 8B and they all died. While my Illinois Everbearing was fine. I’m trying to gather information on hardy these varieties are. If I should try replacing them to continue my trials or give up.
aussie / Australian
french Syrian
lebanese heart
twainese four seasons
thai dwarf
maui
world’s best (2 died 1 alive)

@Seattlefigs , Gerardi does well for me in Zone 4. “Gerald” as I call him is 8 years old, 12 feet tall, 8 feet wide and produces loads of yummy berries. It is a real bugger to put a net on him but the only way to get any fruit. I don’t know a thing about Mulberries so I can’t speak to the popcorn disease. He came from Burnt Ridge Nursery in Onalaska, Oregon…

wow very nice to hard its very cold hardy popcorn disease i heard is only in certain states so that why i havent personally encounter any but i just dont want to be surprise one day it comes to my state.

had a rather mild winter in WA state 8B

Are you referring to this most recent winter? Because even though it was otherwise fairly mild, the late December freeze killed a lot of my zone-pushing stuff this year, or at least badly damaged them. This is what that freeze was like in my yard in West Seattle: 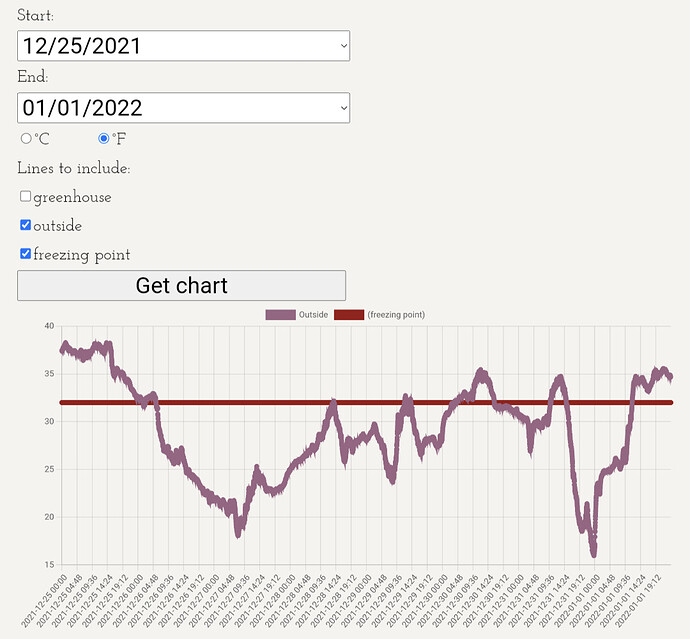 But I don’t have any mulberries specifically, so can’t contribute to that aspect of the discussion.

3 in ground and 3 or 4 in pots survived the winter here in Kent/Renton. Non of them were protected or anything.

but what varieties? i think the ones i gave you were more hardy than these. i was testing these to see how well they will fruit, but the real test is how they will live through our winter unprotected.

No, those were still 8B temperatures (low of 16°F for my yard), but many parts of 8B Western WA were below 15° during that freeze event. I think the bigger issue was the duration of cold and then the extra cold punch right at the end. Notice that the high temperatures on the 26th and 27th were in the mid-20s, and then the 28th and 29th barely went above freezing, so that’s a long stretch of below freezing for us.

keep us posted on how they do!

Northrop and Riverview survived -40f with little damage. good to know about Gerardi. cant wait until they fruit. tried red mulberry but it died. have a grafted illni. everbearing coming soon. hope it likes it here.

World’s Best had some dieback, particularily on thinner branches (thinner than a pencil). Anything thicker did fine. This was the first (real) winter I didn’t protect it at all and it did well.

Kokuso (Burnt Ridge) has survived here without protection of any kind for almost a decade.

My Pakistan, Black Beauty and supposedly hardy nigra are all potted and were brought inside and stored dormant all winter. They all did fine as well.

I’m an example of record cold for zone 8 A/B, northern Puget Sound … low of 7F.
Two-year-old Pakistan, Oscar, Kokusa, and Gerardi all survived in ground.
Of those 4 varieties, Kokusa looks the best and even has one proto berry. However, looks like it needs an infusion of iron. Growing in a 2 foot raised bed along with strawberries. 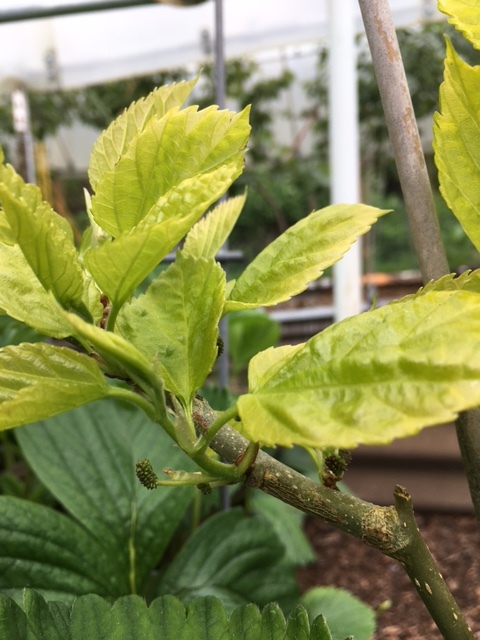 thank you! nice to see them do better in ground in the same growing zone.

However, looks like it needs an infusion of iron.

Often caused by too much water, I see this a lot in early spring. The roots are too cold and wet to take up nutrition. It’s no big deal and should recover completely. Not really a reflection of nutrients in the soil.

Yes I agree…cool weather will do that. My green beans and squash look similar. Gardeners are fretting that if things don’t warm up, it’ll be a rush to the finish line with corn!

My Pakistan looked like that but has fully greened up now. Growing like a beast! It wants to grow early and fast!