I’ve tried zone stretching just about any fruit imaginable. My cold hardy citrus did not work out as well as I would like but it did stay alive several years outside Oranges in Zone 5. Cold hardy figs can be grown in this area. Years ago I tried Cold hardy pomegranate but at the time I didn’t know what I know now. Cold hardy Russian pomegranate are likely possible in zone 5b and up with protection. My last pomegranate I grew cane up from the roots the following year. We were classified as zone 5b and were upgraded to 6A not to many years ago. My belief is once established pomegranate could be grown here as easy as figs. Is anyone in colder areas growing them already? Many websites are already claiming they are 6A -11 and maybe they are but I have my doubts they would survive without protection. See threads like this one Who is growing the Utah Sweet Pomegranate Tree? and you can tell pomegranate are some I’ve trialed and had my eye on for awhile. My plan is to lay the pomegranate down and cover it with wood chips the same way I grow figs outside. I suspect citrus could be grown that way also in much colder zones. @amadioranch grows mango in a much colder area than possible by stacking hay around them like a blanket. Several years ago after years of trying to grow figs I started this thread Cold hardy figs in 2015 which through the help of others and some of my own ideas I’ve finally came up with a way to grow figs consistently. I borrowed ideas from the Canadians who zone stretch by burying trees in snow. Since we did that mulching here with strawberries and straw when I was younger and winter wheat and snow I understood the concept. I’ve used wood chips to mulch new trees many times but those things are all on a much smaller scale. I’ve got it on very good authority the old timers backed there model T’s up the manure pile to keep them warm so they would start the next day in the winter. How many times have we all seen steam rolling off our compost pile? After watching my wood chips steam many times it’s s pretty easy conclusion I should have that of many years ago. It’s a lot of work to bury things in wood chips which is what kept me from commiting to it sooner. There is likely as easier way! Perhaps the easy way is just get a tractor with a bucket and go dump wood chips on a row of pomegranate , citrus and figs every year. What are your thoughts on growing pomegranate? What are the hardiest pomegranate?

3 Likes
Pomegranate Success! in Mid-Atlantic. I live in Chesapeake VA, which is very near the coast. We have HOT humid summers, but I have had success with my pomegranates
CQFD October 6, 2018, 5:52pm #2

I’m in zone 5 (Montreal, Qc). I tried pomegranate seedlings several years ago. I planted them directly against my house’s concrete foundation, no winter protection. They barely survived 2 or 3 years. Barely coming up from the roots sometime in June. Everything else was killed to the ground.

@CQFD
Was that the Russian pomegranate? I think with the addition of 2-3 feet of woodchips and laying the pomegranate down flat it might be possible to grow them. The fact you kept them alive so long is impressive!

I then experimented with fig trees and found 2 ways to protect them for winter.

This is how I lay my dug up fig and jujube trees. 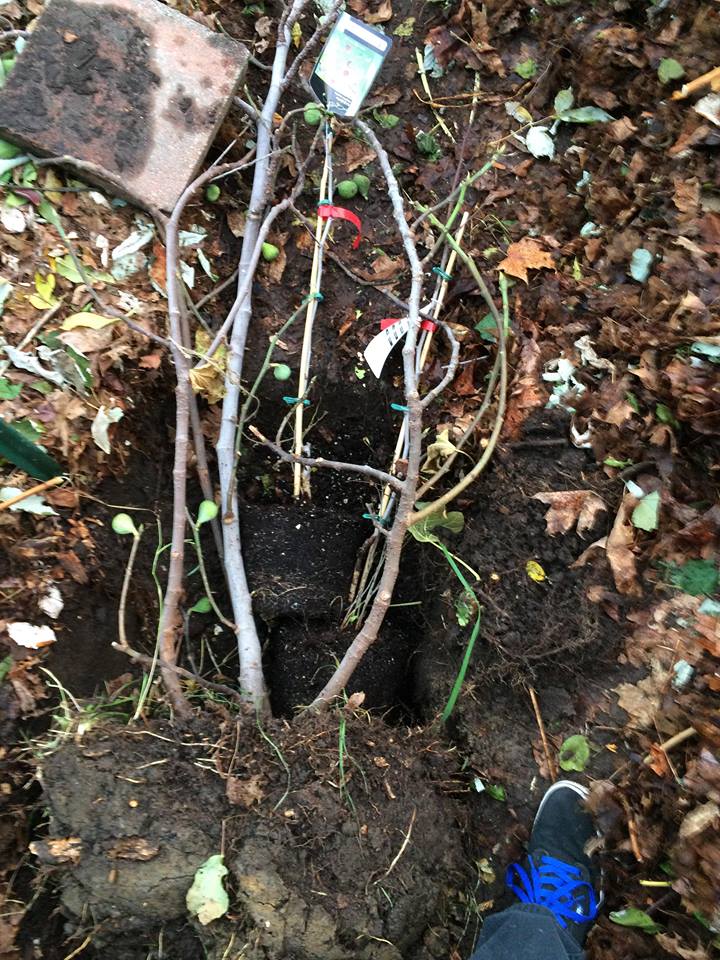 Coming to the pomegranates…

I started 2 new seedlings… and I found and bought 2 grafted pomegranate shrubs (sorry, cultivar names were not specified).
I’m going to lay them flat in a trench along with my jujube and fig trees and protect them for the upcoming winter. They should all survive.
Next year… I will try to permanently plant them in front of the house (south-east) against the foundation, and make them grow horizontally at not more thann 12 or 18 inches from my wood chip the mulch (ground).
They will have more heat and sun to hopefully help fruiting. Furthermore, they will be much easier to protect for winter. 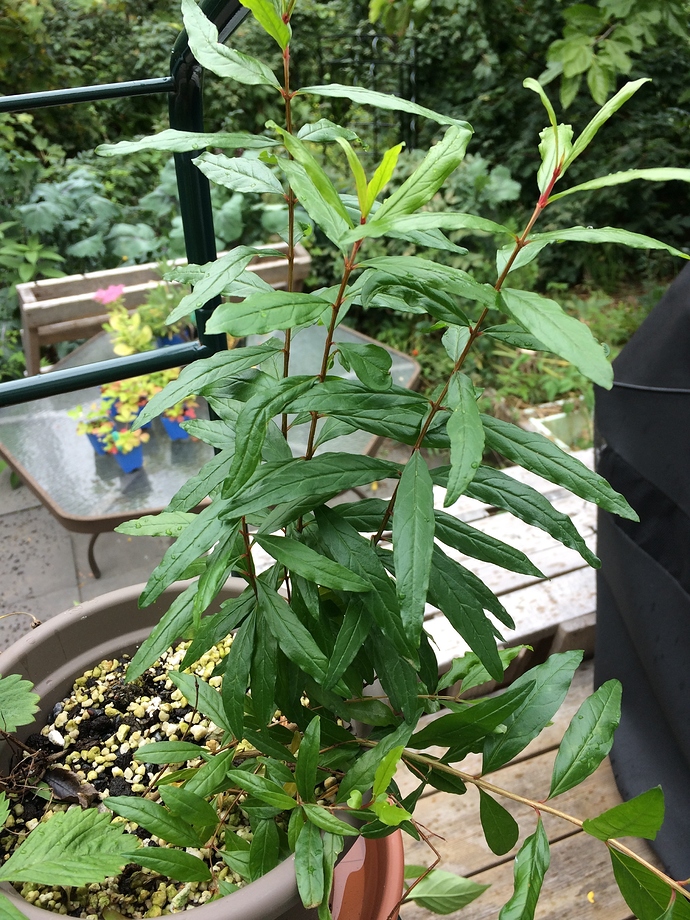 I don’t want to fuss over them in ground. I have too much to do already. So I’m trying in containers. I have 2 1st leaf, and two 2nd leaf. The 2nd leaf plants both flowered but most of the flowers dropped off. A few started to form fruit but soon aborted. It was a tough winter for a young plants. So not the best photo as it is surrounded by figs. Here is one of them, Salavatski. 2nd leaf end of season. 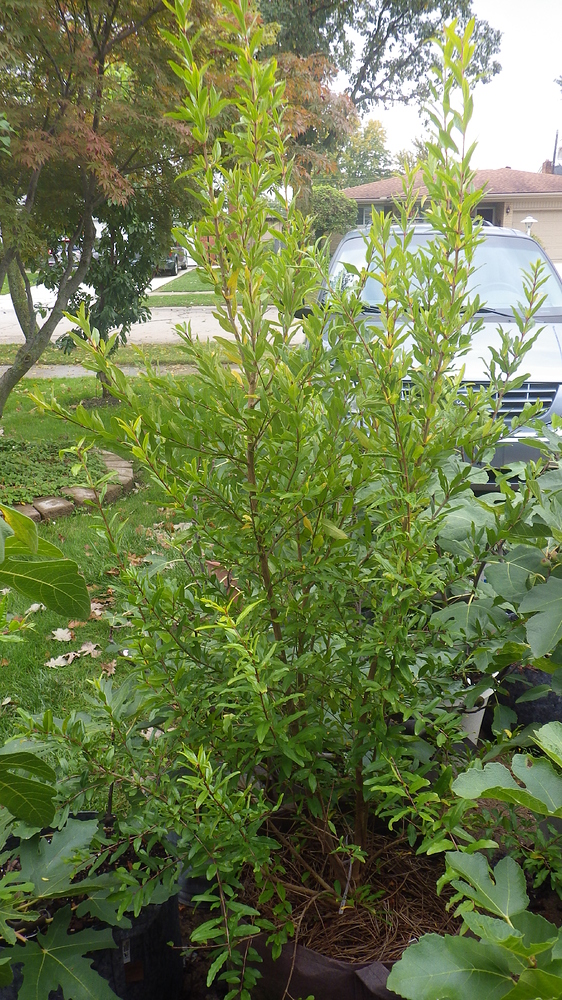 These things are beasts, they want to form into shrubs. I let it. I think it’s in a 15 gallon root pouch. The leaves looks much like some willows around here.

@CQFD & @Drew51 very nice pomegranates! Drew it looks like you will get fruit next year!

Drew it looks like you will get fruit next year!

Hope so! I have another just a touch smaller, Al Sirin Nar is that cultivar.
I also have a 1st leaf Parfianka and 2 Granada 1st leafs, I don’t plan to add anymore until I see how these work or don’t work.

I’m in zone 5, Montreal, Qc.
My first goal is to keep them alive

I might eventually get them to fruit in a cold frame.
I’m working on it

Last summer I acquired ,a lot of seed from two plantings in Ga.
That had only the hardiest Russian poms in them ,I have hundreds of seedlings from that.
Many I have just planted out and am wishing them luck.
Others I will winter inside one year, and plant in ground next yr.
This is a long shot.but may be interesting .
I don’t know much about pollination of poms.other than they are self pollinating . I am hoping they have crossed and I end up with at least one good hardy one.
I have several other varietys here , no fruit yet. Slavatski does look to be the toughest …had a “favorite” that was doing good but I think I killed it with neem oil. I think they are very sensitive to neem. So be careful
Will up date as things progress

There are some interesting projects going on! Can’t wait to see pomegranates in a couple years!

I’ve got 1 russian pomegranate variety still struggling and returning from the roots each year. I’ve also lost 3 potted ones that I moved in and out of the garage (they were 6+ feet tall each last fall).

I got blooming on 2-3 of the potted ones for a couple years and actually had fruit forming last summer. They never developed sufficiently to full size, all were aborted by the plant or stolen well before ripeness.

All potted poms were lost last winter. I had a problem with the roof needing work and had a few leaks which may have contributed to my worse than usual losses in overwintered plants in the garage. (I also lost a few large 15-20 gal potted figs).

I have thrown in the towel on pomegranates and I’m pretty stubborn when I try something new gardening.

Best of luck to you, though…

@clarkinks,
How have your pomegranate project progressed this year?

@Drew51 - do you have any flowers from your pomes this year?

My Kaj Acik Anor had first flower in June but it dropped. Right now, the 2nd flower is blooming. I also see 3 more coming.
I don’t have other variety to cross pollinate. They also bloom too late. My pomes are for a sentimental value at this point. 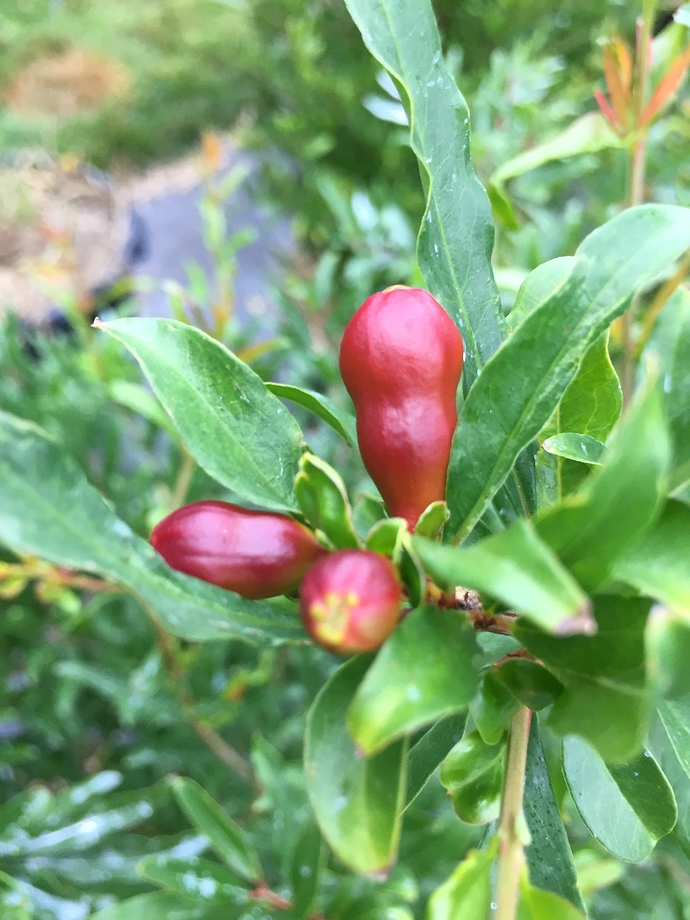 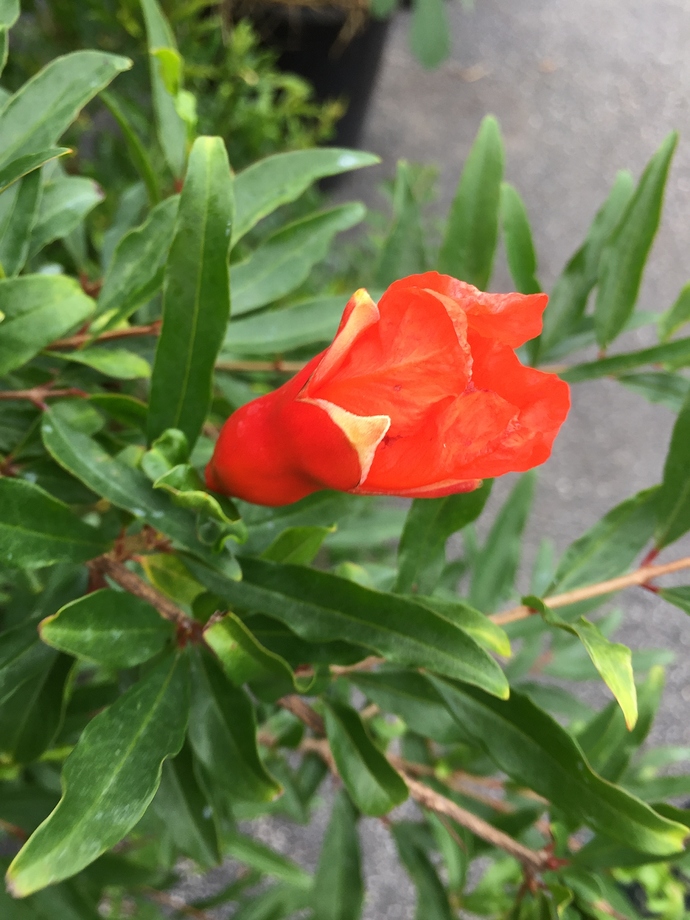 Mine flowered lightly this year. As did my stone fruit. I’ll give them one more year. The flowers are falling off. So it looks like no fruit.

Same here, flowered and dropped. Next year I may get some fruits if the plants don’t die back.

Scott,
What are the varieties you have kept? Are they all in ground?

The project is on hold for now.thanks