Ok, thanks – that is interesting. Any idea about how many hours of light it gets in the summer and end of season? I’m curious what is ‘enough’, for peach production, here in CO.

I am not in CO, but I used to live there and have a lot of family still there so I followed this. If I were in CO I would give a try at planting seeds of the central asian apricots, which tend to be much higher in chill requirements than are met in California. They seem not to be a perfect climate fit here in CA and I have wondered how they would do in CO.

Last week I tried the Kandak tree-dried apricots for the first time. This is the variety from the Ferghana valley, the same region (I believe) that led to Candycots Yuliya and Anya.

If this does not work, you are only out 10 bucks and the trouble of shelling the pits, and putting the seeds on a wet paper towel in your fridge for a couple months:

The flavor on these is phenomenal and I have no doubt they are the same genotypes that are producing 25+ brix apricots. They come with the pits inside. They are very dry, like astronaut ice cream kind of chalkiness but delightfully sweet. My kids tore through the first bag in one sitting so we ordered a bunch more. I got this idea because Stan on here did this with Candycot seeds and now has seedling trees producing fruit that were reasonably true to type. My brother in Denver is probably going to plant his Kandak seeds and see what happens. I understand Denver has winter swings in temperature and the Ferghana valley winters are cold but reasonably stable so perhaps Denver wont work consistently. Best wishes on your stone fruit efforts.

The trees get about 9-10h of sunlight during the summer. Probably less than an hour mid Winter.

Thanks - that is good beta.

I stumbled on this Colorado State study from 2018 yesterday, regarding root stock hardiness and impacts on tree growth for Peach, Apple, Cherry. Given it is local, I thought this group might find it interesting.

So luckily we have lots of peach flowers left on every tree so that is nice to see! This has been a very strange year my sour cherries have been flowering for over a week and just today my first sweet cherry opened up. First time that has ever happened that i can remember in my lifetime.

Here is a picture of my montmorency cherry bloom about 50% of buds maybe more have opened. She is on Gisela 5 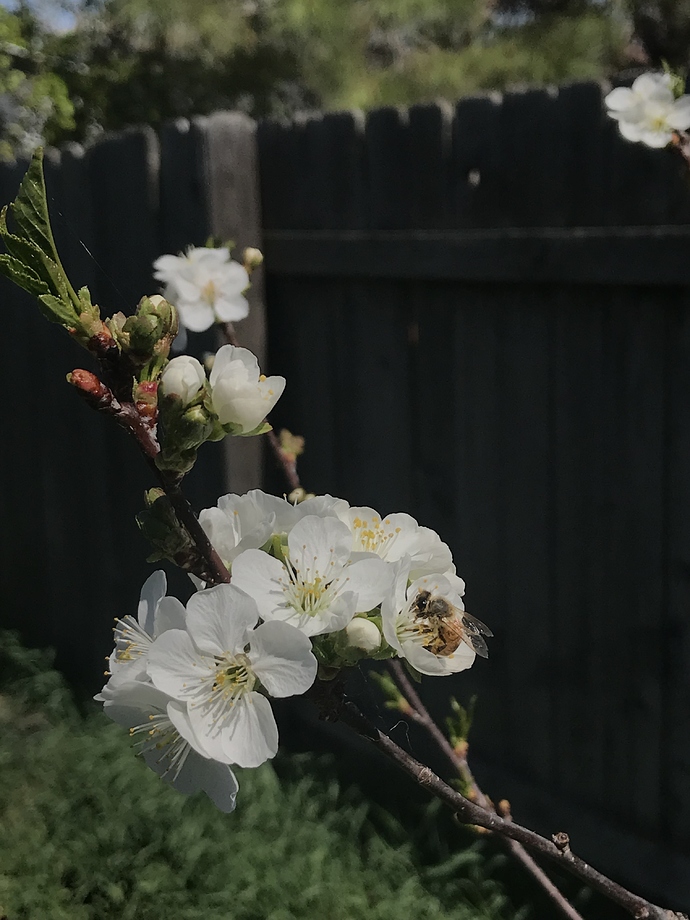 It’s been a bit of a disappointing spring for me.

For apples, my established Honeycrisp are on their second year without flowering. The first year I chalked it up to the heavy pruning due to fireblight. This year I’m at a loss, especially since there were many buds that looks like they would be flowers. I’m getting close to ripping them out. My other apples are still young, plated this spring or last.

Peaches have started pushing growth, but its clear that there was a significant amount of winter damage. I’m guessing it was a combination of two things. First, my peaches are well established and their roots are probably very much under my turf. When I fertilized the grass in late September it probably hit the peaches as well. Second, combine that late feeding with the cold snap we had in early October when it went from 83 to 13 in two days, and I’m looking at most branches with about 60 - 90% winter damage on last years growth. I’ve got flowers, probably enough for a fair amount of peaches, but the trees are looking rough right now. I won’t complain though - I could be one of the to many who have lost almost all stone fruit this year to late frosts.

I’ve got a Northstar and Carmine Jewel cherry that stared flowering last week; I’m hoping to get my first pie-load this year.

My nectarines (Arctic Glo and Harko) had most of their flowers get fried during our 15 degree days in April and the flowers that have come after are dropping. That said, they are still really young so I’m hopefully for the future.

The plums, pears, pluots, and apricots are all too young. I’m hopefully to get a few fruit from them next year.

Ouch sorry to hear. Yeah i definitely try to hold back N after july here as it leads to just dead winter tips i think. Although i just accept some winter die back every year.

Honeycrisp takes a bit to get into bearing but maybe there are still some flower buds, mine have not opened or really shown much of themselves yet. Only Rubinette and Liberty have flower buds out but not open.

My sour cherries were very early this year and are blooming with bavays gage which has had a good set. Sour cherries are super reliable for me.

Still evaluating our apple trees. We had two frosts here in Laporte in late April. Got down below 20 deg and it looks like may have killed some of the early blooming flowers. We have two Dolgo crabs with a few blossoms, but the Transcendant crab didn’t have any flowers this year. So far only a Granny Smith, Hubbardston None Such, and Westfield Seek No Further have bloomed. I have a few more ready to flower probably next week, but it doesn’t look like a very good apple year

Just a quick update…apples and pears were fried from the April deep freeze. However, the contender has fruit on it. I would have never guessed. Now if we can survive hail season, we will be looking forward to some great peaches. Also, all the grapes made it through the freeze as well.

Bummer on the apples and pears, but good news on the peach. What types of grapes do you have?

I’m growing Marquette, Petite Pearl, Lacrosse, Itasca, and Brianna. This is a good year to test bud break and harvest parameters. I’m going to invest in whatever works best here.

Yeah my apples have been pretty odd. Only a few that were more advanced had frost damage and any damaged buds that i could see however only a few set fruit this year and many others who have bloomed before did not bloom and they also lost there crop last year so it should have been a bumper harvest. Peaches, E. Plums and Sour cherries are all doing pretty good and have decent fruit set. My sweet cherry has had damaged blossoms and so far only a few have turned into baby cherries. Mulberries are late this year and possibly going to fruit.

However i had severe die back on my Indian Free Peach on Citation, My Hudson sweet cherry and my opal plum on st julian A. I am probably going to back up indian free and opal on different rootstocks however hudson sweet cherry which usually has done fine through freezes (maybe its something else but no sign of disease or insect damage and is on a very hardy rootstock) i will probably ditch.

While I’ve had success with most things in my yard, I’ve struggled a lot with grapes - clearly I’m doing something wrong. My two Marquette, which I’ve had for, I want to say 4-5 years now, looks to have lost their main trunks. They are sending up new vines, but I am disappointed to see them struggle with a fluctuating, but relatively mild, winter. Of my three younger Reliance grapes, it looks like only one survived. Any advice on what’s worked well for you Dan?

Sorry to hear about your Marquette. I’m still only a few years in so I really don’t have much to report back on what is successful here. I haven’t had a harvest yet. Keep me posted on how things go for you. I’m just happy we don’t have JB here yet…heard they are pretty bad in Denver.

Put out my milky spore today! Was glad to have a bit of rain and some cool. We just need to get a few people every mile or so to apply it now

. I have had a really hard time at getting grapevine’s established because the Japanese Beetles always swarm them and devour my small plants in a evening. 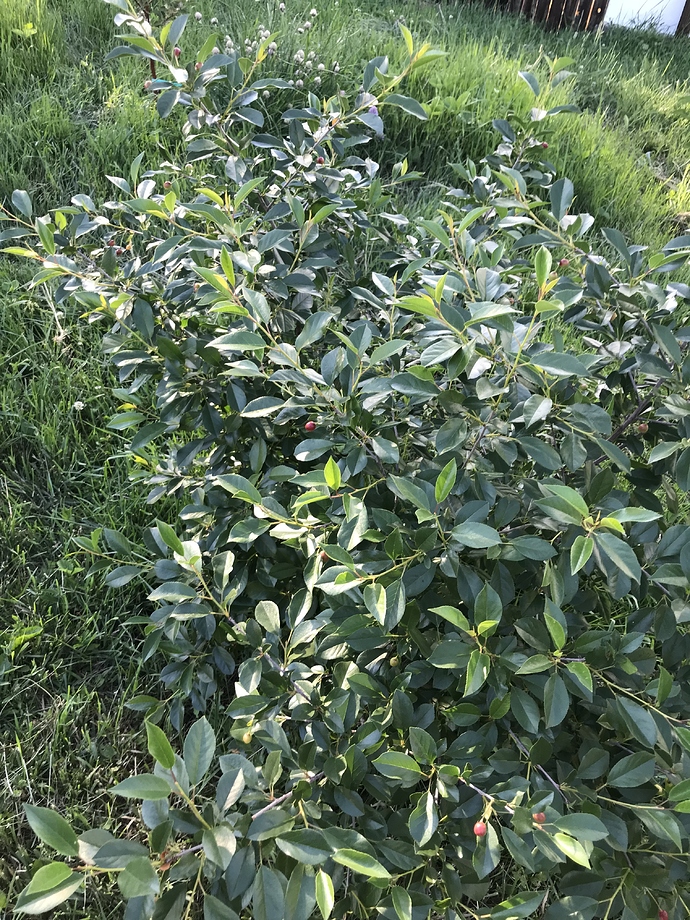 We gotta ignore the lyrics and meaning to this song and just listen to the man verse!

I havent checked in because i assumed this was going to be a total dud of a year. We have one peach in three mature trees. No plums no apples.

I made peach vinegar last year and it is to die for. Does anyone on yhe front range have tips where i can get seconds or even thirds in a bit of quantity? I really want to do another batch of peach and also do apricot, i just need the ugly fruits to do it with. Ideas?

So far it looks like our tomatoes will be great. Pumpkins keep getting major stress and are way behind despite hoop house start. I have shade cloth on the way to hopefully ease their stress.

I’ve got you beat - I’ve got two growing peaches out of two mature peach trees! I’m not sure why the poor fruit set, as at least one of the trees (Elberta) had a good bloom and initial set, but then all the fruit dropped. Maybe that April deep freeze did more damage than I initially thought. Oh well, I’ve had three productive years in a row, so a successful peach crop three out of four years for CO works for me.

Tomatoes are rocking as are my peppers and my giant pumpkin. One thing I’m quite surprised about is how well the rhubarb is doing, especially with all hot and dry weather. Was hoping to bake it up with some strawberries, but they’ve had a disappointing year as well.

What’s struggling most though is the grass (and my water bill). 100 degree days ahead and almost no rain since May and none forecast anytime soon. I’d even take some typical afternoon hail if it meant a decent amount of rain.

Our liquor manufacturers buy up most of the seconds and thirds and with this being a year with the western slope getting a 50%-ish hit my assumption is it will be hard to find seconds or thirds but you should be able to buy a case of palisade peaches this week or next. They will go fast this year i think.

This year for me is mainly sour cherries as my sweet cherries (all 10 or so) flew off in the wind with many apples. Only 3 of my apples had any set and the wind took most of those. Decent amount of peaches for intrepid and contender halehaven had good set but lost all but one or two in the wind also. First year my mulberries did not get frozen out so that was odd. I did have one tree die and two with severe die back from the late frost however.

My watermelons have also grown really slow and i think my pumpkin broke vine broke in the wind but it could be coming back by now? Tomatoes are rocking. My peppers I was late to get transplanted and decided to be one foot tall this year. My rhubarb is less than stoked but maybe i should not have let it flower?