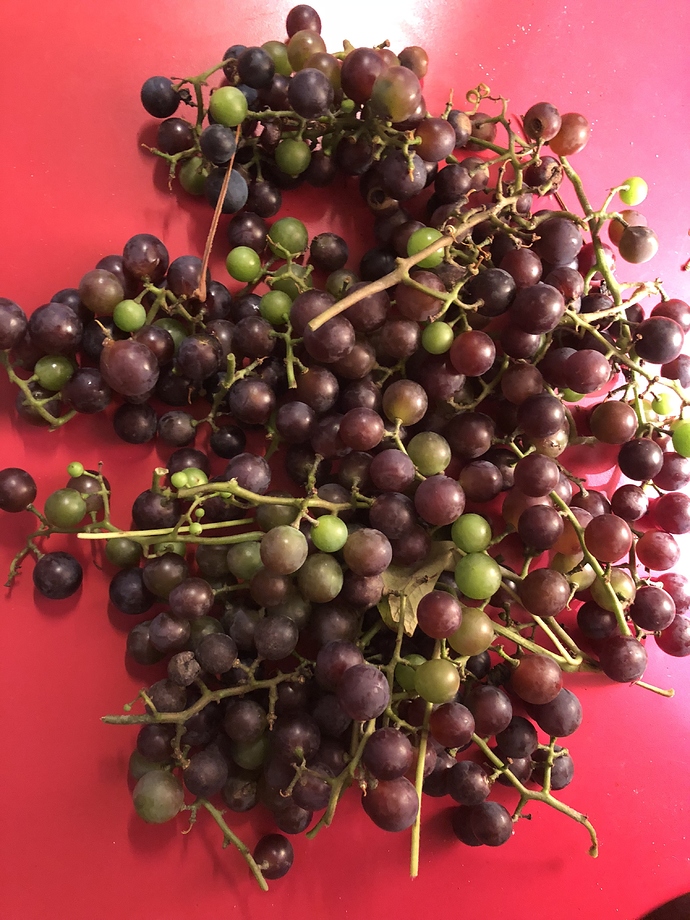 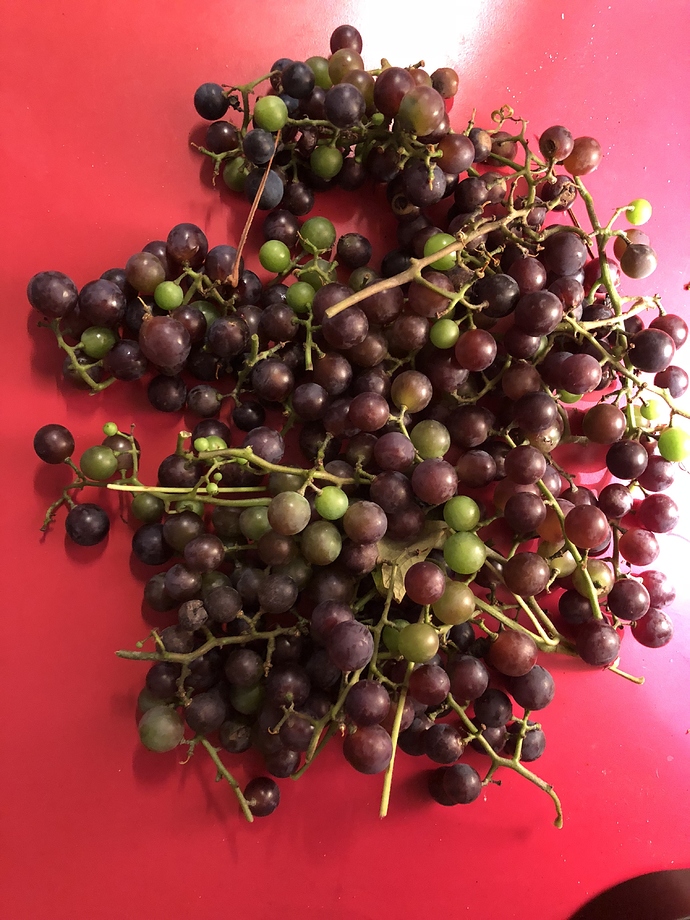 image3024×4032 3.24 MB
These were the biggest , full-sized Concords yet! They say strike while the iron is hot! These grapes grow over a large arched arbor. Yesterday they were full and beautiful, but I stopped from picking thinking I’d give them one more chilly night. The racoons love me!!! They tore into the arbor while I was dreaming of what I would do with them! Well, went to pick them this afternoon. I brought in at least two quarts, which is fine and there are stragglers left. Will make a grape pie tomorrow, but two quarts is not enough for jam!!! Also you will see green grapes too, as they were not all ripe. If I waited another day I would have zero! They are big though. I am hoping they will ripen a bit on the counter over night!

Something cleaned out my concords this year too. I suspect a raccoon, I probably should have set a live trap, oh well maybe next year

Kills me; really from flower to fruit, I wait and so little in return. Did not have to spray them at all this year!

funny my father had 2 arbors of concords that grew well despite being in a zone colder and with property bordering a swamp full of bears, coons and hares, he never lost any. would let them hang until the frosts hit them and they started to shrivel a little. made the best jam/ juice I’ve ever tasted next to my black currant jam.

You make me cry! That is exactly how it should be. Newport in RI is a city. We have more deer, coyotes, squirrels, voles, moles, raccoons, birds, mice and rabbits than anyone could want. Why me?

My mom has been eating my concord by the bucketful she is on the third gallon now. Picked my last today. My wife and I ate a few. Going to try to make leather and a tray of raisins come Sunday night. See how that works. Last year the yellow jackets got 3/4 of the crop they were so thick in there. This year been sharing with a hummingbird. Today was on one side and heard him lifted my head and not 8 inches away he was hovering there. Left a few on vine for him.

I don’t Think they eat much .

difference between me and you is we can and do shoot these problem animals regularly but its not possible in a city unless youre stealthy with a pellet gun. i have a fox trying to dig its way to my chickens. only thing saving him is he comes at night. i may need to put a night vision scope on my .22 and camo up to get em’!

For a while now I would go out and get some and couldn’t figure out why I would just have skin on a bundle like everything was sucked out so I kept a lookout for the pest. For a couple of weeks didn’t see anything then I saw him. He’s been here for about a month. What he eats is negligible besides I like them

I put these in the steam juicer yesterday and got 3 quarts of juice. The kids like it so we might just end up drinking most of it. I’ll try to make at least one jar of jelly, though. 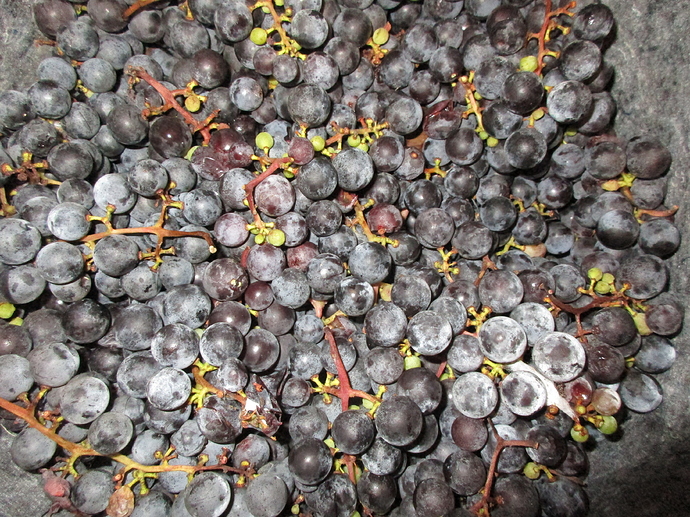 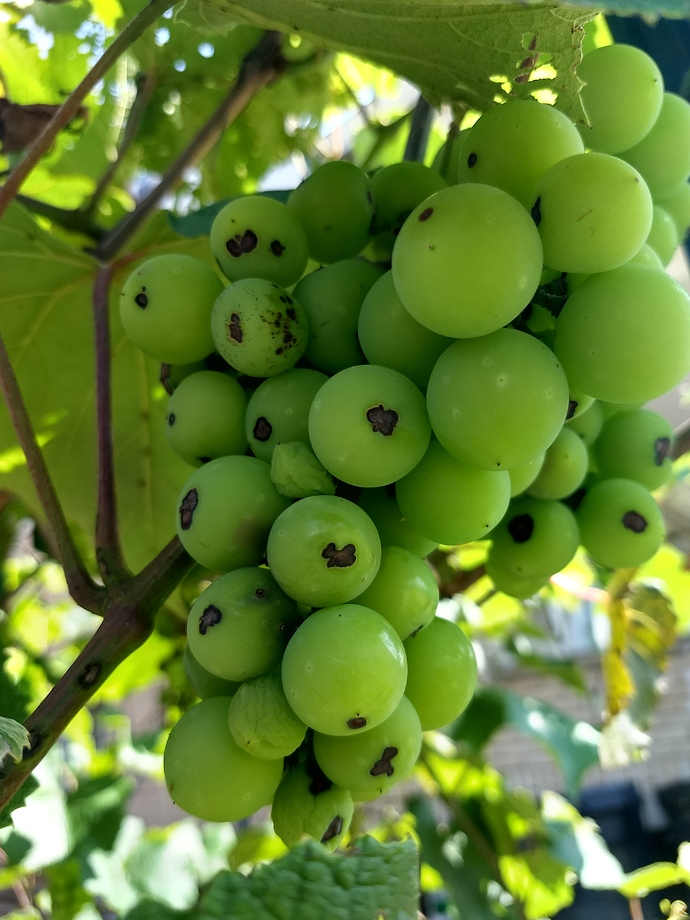 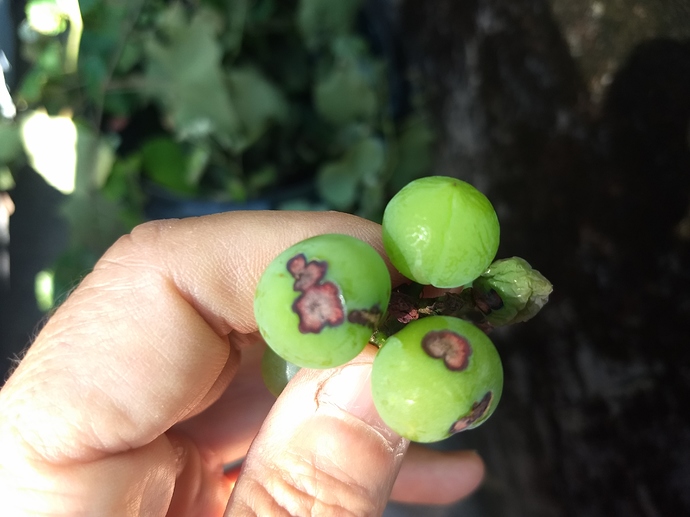 Sorry I have never seen it. Looks like a fungus:

Looks like anthracnose. Can’t do much about it now, badly affected berries can shrivel up but many will develop as normal. Dormant lime sulfur or early sprays of mancozeb/captan will take care of it.