Last fall I built a home-made tool that some folks on this forum might find useful. This weekend we put it to work and I took some pictures so I thought I’d put up a post. 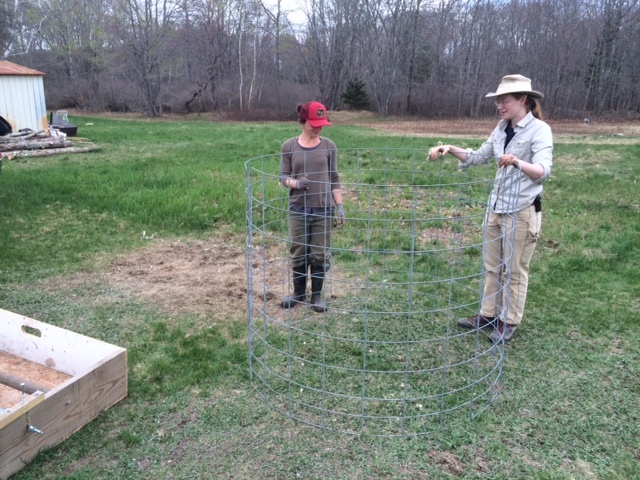 The project started because I got frustrated trying to protect young fruit trees from deer in a situation where a perimeter fence isn’t viable (e.g. a long row of trees along a driveway). Previously we’d been doing it with individual mini-fences made with wooden stakes and plastic deer netting, but they were slow to build, difficult to open for pruning, thinning, and borer patrols, and not that attractive to look at.

The local Tractor Supply locations sell 4’x16’ cattle panels welded from heavy-gauge galvanized steel wire. They’re just over $20 each, and we’ve found them useful for all kinds of things, including trellising peas and tomatoes, temporary dog pens, etc., so it made sense to try to protect apple trees with them. I found that if I brought the ends together and wired them in place, it would make a decent enclosure for a tree that would stand up by itself without posts or stakes, but the shape was sort of a squashed teardrop, which was too small to provide protection. If I instead lapped the two ends over by ~8" and lashed the lap tightly together with wire, it would make a round enclosure that provided better protection and looked pretty good, but then it was annoying to get at the tree - at first I could just lift it carefully off the tree, but as the tree grew that stopped working.

Ideally I could somehow form each cattle panel into a circle of the right diameter, such that it would form an efficient, stable enclosure, but one that could be opened in a moment and removed from around the tree for maintenance, and replaced just as easily. So, taking inspiration from a standard tool used by sheet metal fabricators, I set out to make a slip roll for cattle panels.

I built it out of scrap wood and three pieces of used steel pipe (2" trade size, schedule 40), with plugs in either end to support an axle. The panel passes over the first roller, under the second, and over the third, and the relative position of the middle roller is adjustable with screws to set the diameter of the finished ring.

Here it is in action, with Holly, my sister, and a friend about to pull/push a panel through the roller: 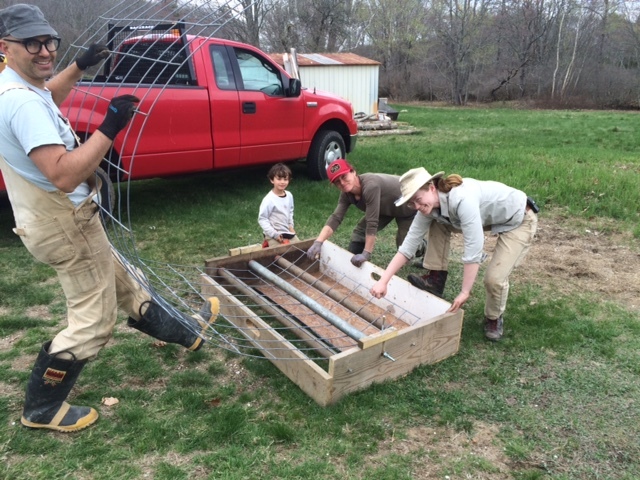 It can be used by two people, but three makes it pretty easy, and it does the job in a single pass. Here the ring is almost finished: 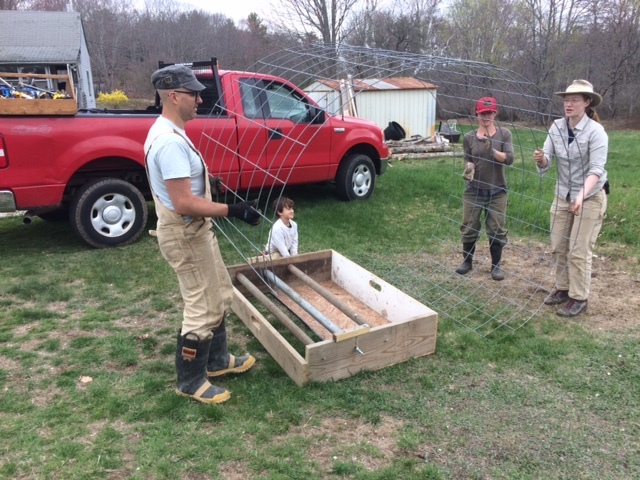 And here we’ve positioned the ring around a newly-transplanted apple tree - no posts or stakes are required: 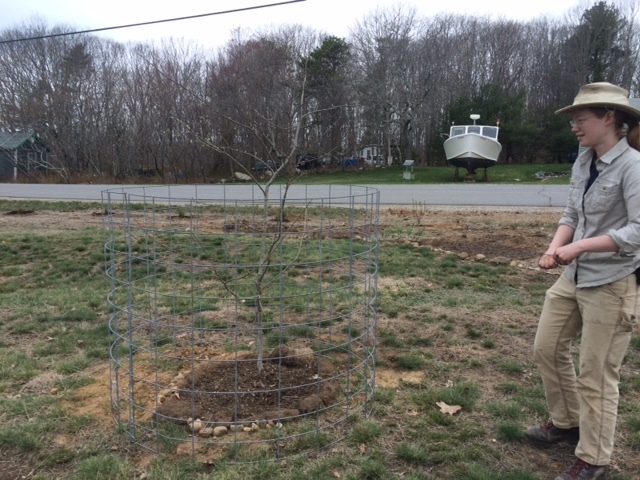 Generally the resulting fence is pretty robust. I plowed a couple of ~16" snow storms right next to a row of these fence rings, and they stood up with no trouble - similar treatment has thrashed plastic deer netting for us in the past. If we had had extreme deer pressure, escaped goats in the neighborhood, or moose on the loose I might need something bigger/taller, but as it is they kept several trees safe through the winter. The roller can also be adjusted to make half-circles, third-circles, etc; but that would get kind of expensive to protect a single tree, and if the pen got big enough the deer might start to feel comfortable jumping into the enclosure.

It’s also easier to transport the panels in rolled form; next time I may just take the roller to the store and roll the panels in place so they fit in the back of the truck!

All in all, I’m pretty happy with how it turned out, and the fences it rolls. If anybody else builds one I’d be interested to hear how it works, and if you’re in the neighborhood of Portland and want to roll some panels, I’m happy to lend it to forum members.

Wonderful gizmo- and very clearly described and well said. And, you got a much better price on your panels than we did for our “stock panels”. (We use four of those wired together into a rectangle to protect our raised beds, on which they are perched.) Thanks!

Yeah, I’ve been surprised by how affordable those panels are (last spring they were on sale for under $20), and the galvanizing on them seems to be pretty decent. The Tractor Supply chicken wire is a different story - it started rusting about three weeks after I put it up!

We use concrete reinforcement mesh which has a similar opening size. Not quite as heavy duty, but definitely self supporting and a bit less costly.

I fold them into squares with 4 foot sides. Its a pain in the butt.

I’m the guy with the rain boots in the pictures. This thing did a great job in a short time; nice work Ben. I wish I had enough space that I could make more use of cattle panels!

Great idea! How far apart are your rollers? And, how do get a new panel into your contraption? Do you loosen the Middle roller? Tnx

Mike:
The cattle panel roller is drifted in under a foot of snow right now, but judging by the photo, I believe the spacing between each of the three rollers is on the order of 10"; I’m pretty sure it’s more than 8" and less than 12". (The frame is made of 2x12 on the sides.)

The middle roller does indeed pop out - it has 1/2" bolts sticking out either end as axles. If you look closely you can see that there’s a slot in the side plate of the assembly, and the axle rides in the slot. There’s a bar of wood 1.5" square by ~10" long on either side that pivots on a 3/8" lag bolt so it can swing out of the way.
There’s a machine bolt that passes vertically through the square bar, threads into a T nut in the underside of the bar, and drops down into the slot to set the position of the middle roller. It takes some trial and error screwing and unscrewing the adjuster bolt to get the diameter right; in practice it’s best to roll them to a slightly larger diameter and pull the ends together with a scrap of wire.

The axle bolt on each end of the roller is held rigidly centered in the pipe by some combination of a modified pressure test plug (which you can buy at a home improvement store) in combination with some red oak cylinders I made with a hole saw. The most annoying part was sanding the oak cylinders down to get a tight fit.

Great idea! I wish I would have used those from the start when I planted my trees instead of flimsier wire fencing. From now on I’m going to try to use cattle panel. I’ve done one so far, but it is a football shaped guard made from two 8 footers. The disadvantage of the football shaped guard vs. circular is that the deer can get a little closer to the tree to nibble on some branches, but the trunk and most branches are still protected. It’s also not quite as stable as a circle. An advantage is that 8 footers are easier to bring home in a pickup truck, but they are also more expensive. It was fairly easy to put up with one person, but the longer you make the cross brace the harder it is to handle. Here’s kinda what it looks like: 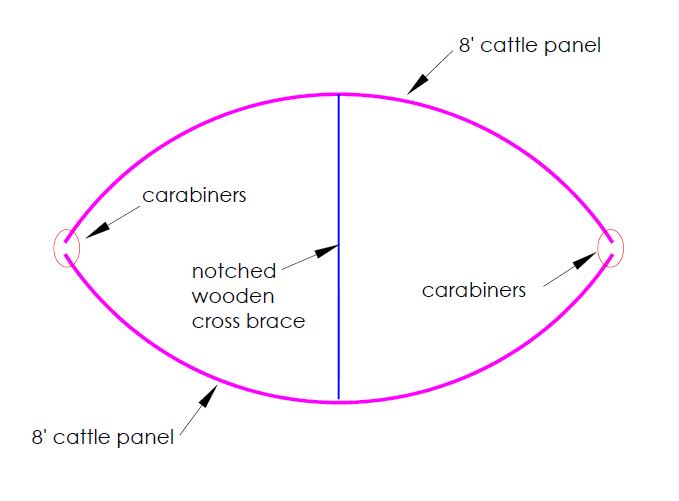 On a side note, I’ve used cattle panel for tomato cages and it is very difficult to bend into a small diameter circle. I think I ended up using a conduit bender but it took awhile.

That’s a cool idea for a larger tree. Have you tried using tension between the two seams? (That is, a piece of rope or wire pulling the ends together, rather than a prop pushing the middles apart?)

Another low-tech solution that could work in the right circumstance would be to find a large tree of the right diameter (somewhere around 3’ I would guess), and without a lot of flare in the roots, screw a couple of small hooks into it temporarily to capture one end of the cattle panel, then wrap the panel tightly around the tree. You would probably need to do it from both ends to avoid a straight segment at the end, but it might work pretty smoothly.

I didn’t think of tension, but that is a really good idea. I’d probably use 2 wires -->one low and one high. I’ve used these to tension monofilament wire before. They would probably work. Just do incremental turns on each at a time. 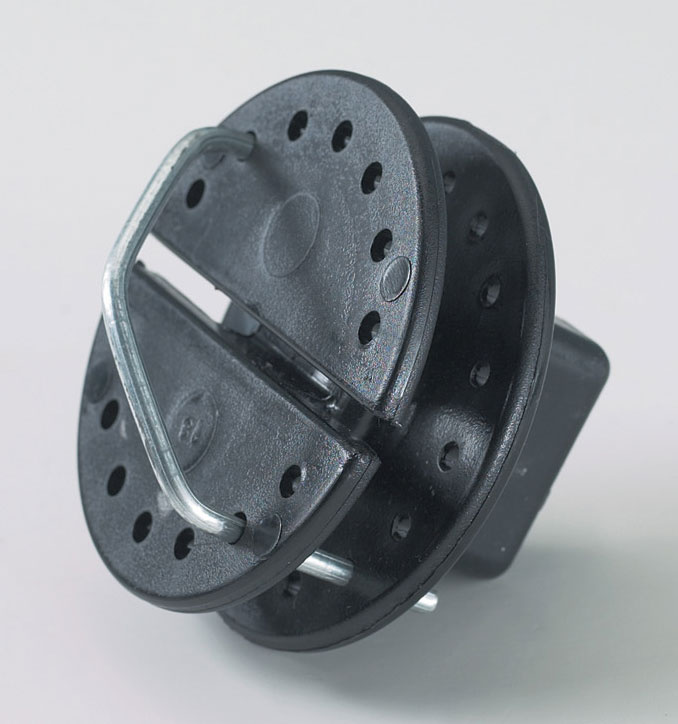 Also instead of bending the panel to form a circle you can just cut the wire off one end, bend hook shapes into the horizontal wires and then hook it to the other end. Round here I dont think they would stay put without cutting he wire off the bottom and sticking those spikes in the ground, 50-60mph winds arent too uncommon.

I don’t want to side-line this thread but I noticed that the finished product here looks a lot like my 5 ft tall, ~5 ft diam. enclosures that come pre-rolled at (checks current price) $13.67 each…from the orange big box store. Since it comes in a roll, I just unroll it and cut off 15 ft., so I get 10 units. I guess ya hafta want ten units. I got mine a while back and they were $10 each so the price is up, but they are already perfectly rolled and they’re 5 ft. tall. They rust lightly to a medium tan and blend in well. I don’t know if this is exactly the one I bought but it’s very similar.
https://www.homedepot.com/p/5-ft-x-150-ft-Steel-Mesh-Roll-84271/302610826

The cattle panels are much heavier grade.

The HD stuff will also work but is much thinner.

I’ve used the thinner stuff, which is actual fencing…it has a few advantages of having smaller mesh at the bottom for the smaller creatures, cheaper, 6ft tall, and ‘pre-rolled.’ The stuff in the link is ‘re-mesh’…rolls of thin re-bar that I cut for individual trees…it’s pretty stout but is not galvanized. Neither of these are the quality of the cattle panels; they’re just different options. I expect the remesh will easily last until the branches are wider than the enclosures…then what? I don’t know. I’ll probably have to let the trees outside the big fence get tall-ish. Trees inside the fence (no deer?) I hope to keep to ~8.5 ft with low branches.

Hello! Your contraption got my brain going. Your contraption is wonderful, so I had to have one too. By the time I got around to it, I had built upon your design to make it easier for one person to operate it and built myself a smashed finger preventer as well. I can roll a panel in just a couple minutes by myself, then wire it together, roll it over to a tree, open it, and place it there permanently easy as pie. Apple pie of course! I added very cheap bearings and a place to put your foot to hold it down when pulling the panel thru.

Any chance of a couple of pictures.

I am having some trouble figuring this out, I will add the smashed finger preventer later.