One of the few places we have that affords a bit of shade is under some hackBerry trees. The grapes I planted near them have never done well. I subsequently found out that hackberries are alleopathic. Is there anything I can do to mitigate that effect? Thanks, D

interesting!
I am surrounded by hackberries. I didn’t know they were allelopathic; I was always told they simply suck up tons of water and thereby stunt other plants. But maybe that is an ol’ timer’s explanation for unseen allelopathy.

If it is true allelopathy happening, honestly I don’t know there’s anything you can do about it. But I have never considered whether there are mitigating practices for this…

But maybe that is an ol’ timer’s explanation for unseen allelopathy.

Or it could be the other way around. It is not easy to research the difference between relative competitiveness for water and allelopathy and there is no commercial incentive to fund such research. Commercial growers just cut down the hackberries. After an unresearched period of time the chemicals break down or leach out.

Looking at the research about allelopathy one is underwhelmed by the extent of scientific knowledge on the subject- whether it be how much chemical is exuded by a specific species or how much another suffers from it. I have never seen any research determining the affects of water competition between species even though it is an extremely important question for home growers. Sometimes even irrigation cannot overcome the stunting affect of nearby forest trees competition for water with fruit trees one is growing.

One way that may determine the level that water competition is involved is to cut a ring around the tree you are trying to grow in the early spring at first growth with a heavy spade. If the tree immediately grows much faster the problem is more likely about water because it takes some time for allelopathic chemicals to be eliminated.

I found this on the interwebs
The mechanism used by hackberries involves the release of a witch’s brew of chemicals known as phenolic phytotoxins leaching from fallen, decaying leaves. The leachates from rotting hackberry leaves have been shown to inhibit the germination of seeds and the development of seedlings. So yes, hackberry can do harm to nearby plants, though it is unclear if it has any effect at all on established plants such as trees, shrubs or even mature perennials."

So if you can control the leaves, you could get ahead, according to this author

I grow non affected plants inground with my huge hackberry and my sensitive plants on my 1000 square foot flat roof. 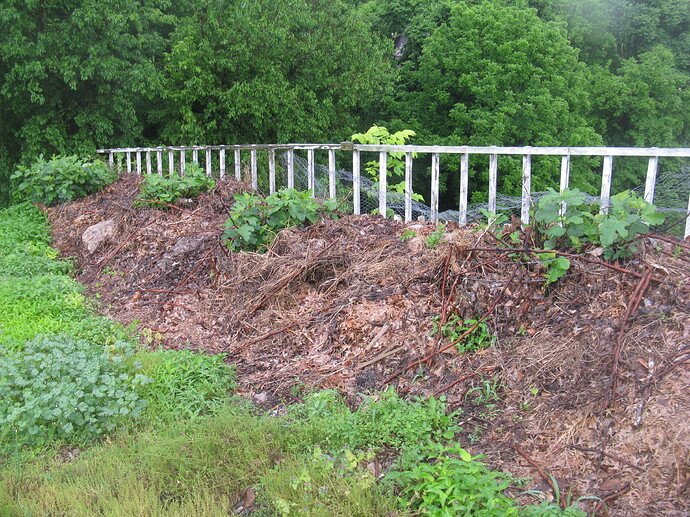 I do know in the limestone area in the Bluegrass region of Kentucky (and I suspect around Nashville and Cincinnati as they have limestone too) you find fencerows with predominently hackberries.
And the secondary tree is often black walnut.

But, hackberry seeds come up in various timber stands and I’ve not observed them doing any damage in that way as they mature. They don’t have the affect that juglone does.
But, it seems possible they may inhibit seeds of other trees as there seldom seems to be
seedling trees under a group of large hackberries.

In areas with pH of 6 or lower, you seldom see a naturally occurring hackberry tree.
I grew up on a large acreage with no neighbors in shouting distance, and I never say a hackberry tree until I was off to college. (Miss those giant slippery elms though.)

Thanks for the guidance folks. I need the shade more than I need a few grapes, so I’ll just let the hackberries have that area. D.